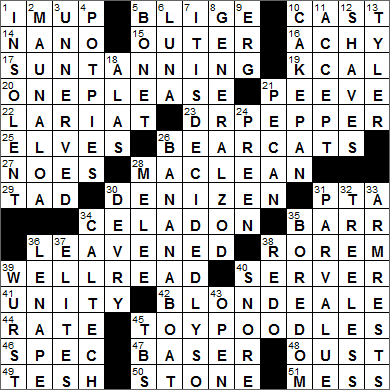 Today’s Wiki-est, Amazonian Googlies
Across
1. Shout when there’s no cause for alarm? : I’M UP!
I’m out of bed!

5. 2008 R&B Grammy winner for “Growing Pains” : BLIGE
Mary J. Blige is a singer-songwriter from the the Bronx, New York. Her best known album is probably “My Life”, released in 1994. Blige is also making a name for herself as an actress and is slated to play jazz singer Nina Simone in the upcoming biopic “Nina”.

14. Little opening? : NANO-
The prefix “nano-” is used for units of one thousand-millionth part. “Nano-” comes from the Greek “nanos” meaning “dwarf”.

16. Like many flu sufferers : ACHY
Influenza (flu) is an ailment that is caused by a virus. The virus is readily inactivated by the use of soap, so washing hands and surfaces is especially helpful in containing flu outbreaks.

19. Heat meas. that also names a major L.A. TV station : KCAL
KCAL is a TV (and radio) station located in Los Angeles. KCAL’s studios are in Studio City, and its transmitter is located on the top of Mount Wilson in the San Gabriel Mountains.

23. Product boasting “a unique blend of 23 flavors” : DR PEPPER
Dr Pepper was introduced in 1885 in Waco, Texas, one year before the competing Coca-Cola was released to the market.

26. University of Cincinnati squad : BEARCATS
The Bearcats are the athletic teams of the University of Cincinnati. The “Bearcat” name came from a specific football game back in 1914, against the UK Wildcats. Cincinnati’s fullback on the day was Leonard Baehr, so the crowd took up the chant:
They may be the wildcats, but we have a Baehr-cat on our side!

29. Smidge : TAD
Back in the 1800s “tad” was used to describe a young child, and this morphed into our usage of “small amount” in the early 1900s. The original use of “tad” for a child is very likely a shortened version of “tadpole”.

30. Resident : DENIZEN
Nowadays we use “denizen” to mean simply a resident, but historically a denizen was an immigrant to whom certain rights had been granted, something like today’s “resident alien”.

34. Green-glazed Chinese porcelain : CELADON
Celadon ceramics are pieces of pottery that have been glazed a distinctive green color. The name of the pottery comes from the “celadon” shade of green. In turn, “Celadon” was a character in the novel “L’Astree” by Honoré d’Urfé, a character who wore green clothes.

35. Attorney general under Bush 41 : BARR
William Barr was the US Attorney General for two years in the administration of President George H. W. Bush. When not working, Barr is a very enthusiastic player of the Scottish bagpipes!

36. Not fit for Passover : LEAVENED
“Leaven” is a substance that causes bread to rise, perhaps yeast or baking powder. The term comes into English via French from the Latin “levare” meaning “to rise”.

38. “Miss Julie” composer : ROREM
American composer Ned Rorem is famous for his musical compositions, but also for his book, “Paris Diary of Ned Rorem” that was published in 1966. Rorem talks openly about his sexuality in the book, and also about the sexuality of others including Noel Coward, Leonard Bernstein and Samuel Barber, much to some people’s chagrin.

42. It’s similar to pale lager : BLONDE ALE
Blonde ales are a loosely-related group of beers that share a very pale color. I’d guess that the most famous of the genre in North America are Belgian blondes.

49. “One World” musician John : TESH
John Tesh is a pianist and composer, as well as a radio and television presenter. For many years Tesh presented the show “Entertainment Tonight”. For “ET” he once covered the filming of an episode of “Star Trek: The Next Generation”. As part of the piece, he volunteered to act as a Klingon warrior and so if you see the “Star Trek: TNG” episode called “The Icarus Factor” in reruns, watch out for John Tesh engaging in ritual torture with Mr. Worf as his victim.

50. Mancala playing piece : STONE
There is no actual game called “mancala”, and rather it is the name given to a genre of hundreds of games. Mancala are “count and capture” games that are particularly popular in Africa. Some of the most popular examples of the genre are Bao la Kiswahili, Congkak, Kalah and Oware.

Down
2. The Ainapo Trail is on its slope : MAUNA LOA
The Ainapo Trail used to the main trail leading to the summit of the Mauna Loa volcano on the island of Hawaii. It was also known as the Menzies Trail, named for Archibald Menzies, the first outsider to climb Mauna Loa, back in 1794. The trail largely fell into disuse after the US Army built a new trail in 1915.

5. Lisa of “The Cosby Show” : BONET
Lisa Bonet is an actress best known for playing one of the daughters on the “The Cosby Show”. Bonet was married for a few years to the singer Lenny Kravitz, with whom she eloped in 1987. She changed her name to Lilakoi Moon in 1992, but still uses “Lisa Bonet” as her stage name.

6. Selene’s Roman counterpart : LUNA
Selene was the Greek goddess of the moon, the equivalent of the Roman deity, Luna. Selene gave her name to the chemical element “selenium”.

7. Relative of “Without a doubt” in a Magic 8 Ball : IT IS DECIDEDLY SO
The Magic 8-Ball is a toy, supposedly a fortune-telling device, introduced by Mattel in 1946. There are 20 answers that the Magic 8-Ball can provide, including:

8. Powerful foe of the Man of Steel : GENERAL ZOD
General Zod is a supervillain and enemy of Superman of DC Comics. Zod is from Krypton, Superman’s home planet, so the two have many of the same superpowers. Zod appeared in the movies “Superman” and “Superman II”, and was played by English actor Terence Stamp.

9. Watt-second fraction : ERG
An erg is a unit of mechanical work or energy. It is a small unit, as there are 10 million ergs in one joule. it has been suggested that an erg is about the amount of energy required for a mosquito to take off.

10. Battery container? : CAKE PAN
A cake pan can contain cake batter, it can be “battery”.

13. Shortest-serving U.S. vice president (31 days) : TYLER
John Tyler was the tenth President of the US, and the first to take the office on the death of the incumbent. Tyler’s predecessor was President William Henry Harrison, who was in office only 32 days before he died of natural causes. For a while there was a little confusion about the wording in the constitution that covered such an eventuality. There was an argument made that Tyler would continue as Vice-President but would assume the responsibilities of the office of President, in effect as “Acting President”. However, Tyler proceeded as though he was taking over as President and took the oath of office in his hotel room in Washington. Soon afterwards, Congress declared that Tyler was indeed President, although many continued to dispute the fact. Many of President Tyler’s opponents referred to him as “His Accidency”. His term in office ended in 1845. When the Civil War began in 1861, Tyler sided with the Confederacy and was even elected to the Confederate House of Representatives for the 3rd District of Virginia. President Tyler passed away only a few days after taking his seat in the House. His death was the only one in presidential history that was not recognized in the nation’s capital, as he sided with the Confederate States.

26. Vehicle that’s loaded in a Harry Belafonte hit : BANANA BOAT
“Day-O (The Banana Boat Song)” is a traditional folk song from Jamaica. It is sung from the standpoint of dock workers unloading boats on the night shift, so daylight has come, and they want to go home. The most famous version of “Day-O” was recorded by Harry Belafonte, in 1956.

28. Highlight for some hockey fans : MELEE
Our word “melee” comes from the French “mêlée”, and in both languages the word means “confused fight”.

30. For-profit university with dozens of U.S. campuses : DEVRY
DeVry University was founded in 1931 as the DeForest Training School. DeVry is for-profit enterprise and has some under a lot of scrutiny and criticism from many groups, including the US government.

32. Like much of northern Siberia : TREELESS
Siberia is a vast area in Northern Asia. The region’s industrial development started with the construction of the Trans-Siberian railway from 1891 to 1916, which linked Siberia to Russia in the west.

34. Prestigious Pasadena institution : CALTECH
Caltech is more properly known as the California Institute of Technology, and is a private research-oriented school in Pasadena. One of Caltech’s responsibilities is the management and operation of NASA’s Jet Propulsion Laboratory. If you watch “The Big Bang Theory” on television like me, you might know that the four lead characters all work at Caltech.

36. Delaware Valley tribe : LENAPE
The Lenape Native American people lived along the Delaware River when Europeans first landed in the Americas. As a result of the enforcement of the Indian Removal Act 1830, most Lenape now live in Oklahoma, with significant numbers also in Wisconsin and Ontario, Canada.

45. Atlanta-based media inits. : TBS
The tbs cable television station started out in 1967 as local broadcast TV station in Atlanta. The station’s first call letters were WJRJ-TV, and this was changed to WTCG in 1970 when it was acquired by Ted Turner (the TCG stood for Turner Communications Group). In 1976, Turner started distributing WTCG via satellite making its programming available in other parts of the country. WTCG was only the second channel to transmit via satellite, following HBO. The difference was that WTCG was broadcast without requiring a premium subscription. The station’s call sign was changed again in 1979, to WTBS, and in 1981 adopted the moniker “Superstation WTBS”.