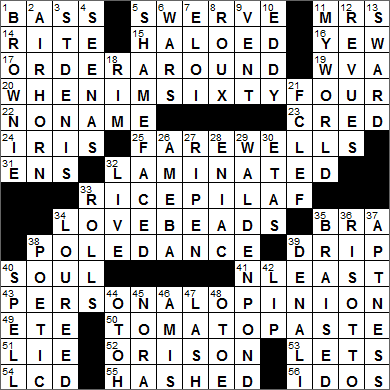 Today’s Wiki-est, Amazonian Googlies
Across
1. Prominent feature of dubstep music : BASS
“Dubstep” is a type of electronic dance music that first surfaced in London, England in the nineties. I doubt there’s any in my music collection …

11. Fields of food? : MRS
The Mrs. Fields brand of snack foods was founded in the late seventies by Debbi Fields. Fields opened her first store in Palo Alto, California.

14. Mass observance : RITE
The principal act of worship in the Roman Catholic tradition is the Mass. The term “Mass” comes from the Late Latin word “missa” meaning “dismissal”. This word is used at the end of the Latin Mass in “Ite, missa est” which translates literally as “Go, it is the dismissal”.

19. Big source of coal: Abbr. : WVA
The state of West Virginia was formed during the civil war when the western counties in the old state of Virginia voted to secede from the Confederate state.

20. Song that Paul McCartney wrote at 16 : WHEN I’M SIXTY-FOUR
“When I’m Sixty-Four” is a 1967 Beatles song composed by Paul McCartney. McCartney may have been looking forward to “when he’s sixty-four”, but he wrote the song when he was only 16 years old.

24. Goddess who caused the Trojan women to riot in the “Aeneid” : IRIS
In Greek mythology the goddess Iris was viewed as the link between the gods and humanity, a messenger. She was also the goddess of the rainbow. In Virgil’s “Aeneid”, Iris takes the form of a Trojan woman and incites other Trojan mothers to set fire to Aeneas’ ships, preventing them from leaving Sicily.

33. One side of the Mideast : RICE PILAF
“Pilaf” is a Persian word, and we use it to describe rice that is browned in oil and then cooked in a seasoned broth.

41. Mets’ division, for short : NL EAST
The New York Mets baseball team was founded in 1962, a replacement for two teams that the city had lost, namely the Brooklyn Dodgers and the New York Giants. For several years the Mets played very poorly, finishing no better than second-to-last in their division. Then of course along came the “Miracle Mets” who beat the Baltimore Orioles in 1969 to claim the World Series in a huge upset.

49. Bordeaux toasting time : ETE
In French, one might toast, get overheated, in the “été” (summer).

50. Ketchup base : TOMATO PASTE
The term “ketchup” may be of Chinese origin. One suggestion is that the name comes from “kôe-chiap”, meaning the brine of pickled fish. The name may also come from the Chinese “jyutping”, meaning “tomato sauce”.

52. “Ave Maria,” e.g. : ORISON
“Orison” is another word for “prayer” that comes to us ultimately from Latin, via Middle English and Old French.

Down
1. Base for some ice cream : BROWNIE
Apparently the first brownies were created for the Chicago World’s Fair in 1893. The recipe was developed by a pastry chef at the city’s Palmer House Hotel. The idea was to produce a cake-like dessert that was small enough and dainty enough to be eaten by ladies as part of a boxed lunch.

3. First bishop of Paris : ST DENIS
Not only is Saint Denis (also “Denys”) the patron saint of France, but he is also the patron saint of Paris. Denis was the first Bishop of Paris, in the 3rd century AD, and was martyred by having his head chopped off. The legend surrounding this event is that the executed Denis picked up his head and walked for six miles, delivering a sermon the whole way.

7. “The Time Machine” people : ELOI
In the 1895 novel by H. G. Wells called “The Time Machine”, there are two races that the hero encounter in his travels into the future. The Eloi are the “beautiful people” who live on the planet’s surface. The Morlocks are a race of cannibals living underground who use the Eloi as food.

8. Sauce thickener : ROUX
A roux is a mixture of wheat flour and clarified butter (or other fat) cooked together until it can be used as a thickening agent. Roux is an essential ingredient in French cooking, although “healthier” versions of roux are being used more and more these days.

12. Some vaudeville fare : REVUES
“Revue” is the French word for “review”.

The Vire is a river that flows through Normandy in France. The poets of the Vire valley were known as the “Vau de Vire”, a term that some say gave rise to our word “Vaudeville”.

13. Grassy surface : SWARD
Sward is a version of the word “swarth”, with both describing a grassy piece of land.

21. Symbol on a cello or tuba composition : F-CLEF
Clef is the French word for “key”. In music, a clef is used to indicate the pitch of the notes written on the stave. The bass clef is also known as the F-clef, and the treble clef is the G-clef.

26. Slide presentation? : AMEBA
An ameba (or “amoeba” as we spell it back in Ireland) is a single-celled microorganism. The name comes from the Greek “amoibe”, meaning change. The name is quite apt, as the cell changes shape readily as the ameba moves, eats and reproduces.

28. Historic computer : ENIAC
The acronym ENIAC stands for Electronic Numerical Integrator and Calculator (although many folks insist that the C was for “Computer”). ENIAC was the first general-purpose electronic computer. It was designed to calculate artillery firing tables, but it ended up being used early on to make calculations necessary for the development of the hydrogen bomb. Given its uses, it’s not surprising to hear that development of ENIAC was funded by the US Army during WWII.

29. Famed cabin site : WALDEN POND
Henry David Thoreau is a personal hero of mine. Thoreau is best known for his book called “Walden” published in 1854. The book outlines his philosophy of life and details his experiences living in a cabin near Walden Pond just outside Concord, Massachusetts.

33. Big cheese wheels? : ROLLS
Henry Royce founded the Rolls-Royce company in 1904 with his partner, Charles Rolls. Royce died at 70 years of age in 1933. His last words were, reportedly, “I wish I had spent more time in the office …”

34. “Walk on the Wild Side” singer, 1973 : LOU REED
Lou Reed was best known as a rock musician and songwriter, and was especially associated with the fabulous 1973 hit “Walk on the Wildside”. Reed is less well known as a photographer, but he published two collections of his work. The first was released in 2003 under the title “Emotions in Action”, and the second in 2006 called “Lou Reed’s New York”. Reed passed away in 2013.

35. Like Swiss steak : BRAISED
The dish known as Swiss steak has nothing to do with the country of Switzerland. Swiss steak is usually made with beef that has been rolled out or pounded and then braised in a pot of stewed tomatoes. The term “swissing” means to pound or roll out a material. Swissing makes tougher cuts of meat more tender.

36. Creamy, whitish dish : RISOTTO
Risotto is an Italian rice dish that is usually served as a first course in Italy, but as a main course here in North America.

39. Alaska’s ___ Park Road : DENALI
Denali means “the high one” in the native Athabaskan language, and is now the name used for Mount McKinley. Denali’s summit stands at 20,237 feet, making it the highest mountain peak in North America. I was surprised to learn that there is a Denali State Park, as well as the Denali National Park. The two are located adjacent to each other (which makes sense!). The State Park is undeveloped for all practical purposes, with just a few campgrounds and trailheads.

45. Gumshoe Charles : NORA
High on the list of my favorite movies of all time is “The Thin Man” series starring William Powell and the incredibly attractive Myrna Loy. Powell and Loy played the characters Nick and Nora Charles. The film series is based on “The Thin Man” novel by Dashiell Hammett.

“Gumshoe” is a slang term for a private detective or private investigator (P.I.). Apparently the term “gumshoe” dates back to the early 1900s, and refers to the rubber-soled shoes popular with private detectives at that time.

46. “Lucky Jim” author : AMIS
Kingsley Amis (what a great name!) was a very successful English writer, famous for producing entertaining, comedic novels. His most famous novel probably is his first, “Lucky Jim” published in 1954, although he won a Booker Prize for a later novel, “The Old Devils” published in 1986. He passed on some of his talent through his genes, it seems, as his son Martin Amis is a very successful novelist too.

48. Winnebago relative : OTOE
The Otoe (also Oto) Native American tribe originated in the Great Lakes region as part of the Winnebago or Siouan tribes. The group that would become the Otoe broke away from the Winnebago and migrated southwestwards ending up in the Great Plains. In the plains the Otoe adopted a semi-nomadic lifestyle dependent on the horse, with the American bison becoming central to their diet.