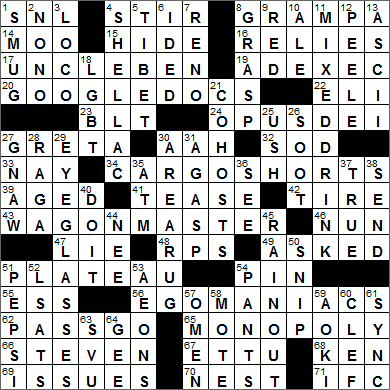 CROSSWORD SETTER: Ben Tausig
THEME: Pass Go … each of today’s themed answers is a common phrase, but one has to PASS GO (remove the letters GO) to make sense of the corresponding clue:

Today’s Wiki-est, Amazonian Googlies
Across
1. Onetime gig for Wiig, in brief : SNL
Kristen Wiig is a comic actress who appears on “Saturday Night Live”. She also made an appearance on the first season of Spike TV’s quirky “The Joe Schmo Show”, playing “Dr. Pat”. More recently she co-wrote and starred in the 2011 hit film “Bridesmaids”.

8. ___ Simpson : GRAMPA
In the animated TV show called “The Simpsons”, Grampa Abe Simpson is voiced by Dan Castellaneta, the same actor who provides the voice for Homer.

17. Spider-Man’s surrogate father : UNCLE BEN
Aunt May and Uncle Ben Parker are characters in the spider-Man universe created by Marvel Comics. The couple’s nephew is Peter Parker, aka Spider-Man.

20. Enjoy the swimsuit edition of The New England Journal of Medicine? : GOOGLE DOCS (giving “ogle docs”)
Google Docs is a word processing application that is part of the Google Drive suite of services. In fact, I am typing this blog post right now in Google Docs.

23. Club alternative : BLT
The BLT (bacon, lettuce and tomato) is the second most popular sandwich in the US, after the plain old ham sandwich.

24. Organization in “The Da Vinci Code” : OPUS DEI
Opus Dei is Roman Catholic institution that was founded in Spain in 1928, and officially approved by the church in 1950. In 2010, Opus Dei had over 90,000 members, mostly lay people. The institution’s mission is to promote certain aspects of the Roman Catholic doctrine. Opus Dei was portrayed as a sinister organization by Dan Brown in his novel “The Da Vinci Code”.

27. Actress Gerwig of “Mistress America” : GRETA
Greta Gerwig is an actress from Sacramento whose best-known role is probably opposite Russell Brand in the remake of the film “Arthur”.

42. Flag : TIRE
Our verb “to flag” meaning “to tire” was originally used in the sense of something flapping about lazily in the wind. From this it came to mean “to go limp, droop”, and then “to tire”.

46. Bhikkhuni : Buddhism :: ___ : Catholicism : NUN
In the Buddhist tradition, a “bhikkhuni” is a female monk. The male equivalent is a bhikkhu.

62. Round a corner in 65-Across … or what you must do to answer the clues for 20-, 34-, 43- and 56-Across : PASS GO
(65A. Game patented December 31, 1935 : MONOPOLY)
The commercial game of Monopoly is supposedly a remake of “The Landlord’s Game” created in 1903 by a Quaker woman called Lizzie Phillips. Phillips used her game as a tool to explain the single tax theory of American economist Henry George. The Landlord’s Game was first produced commercially in 1924. The incredibly successful derivative game called Monopoly was introduced in 1933 by Charles Darrow, who became a very rich man when Parker Brothers bought the rights to the game just two years later in 1935.

67. Words of rebuke : ET TU
In William Shakespeare’s play “Julius Caesar”, Caesar is stabbed by a group of conspirators, with Brutus delivering the final blow. Caesar’s last words are “Et tu, Bruté?—Then fall, Caesar.” After Caesar dies, the conspirators celebrate. Cinna declares, “Liberty! Freedom! Tyranny is dead! Run hence, proclaim, cry it about the streets.” After which, Cassius continues with “Some to the common pulpits, and cry out, ‘Liberty, freedom, and enfranchisement!’”

68. Understanding : KEN
“Ken” is a noun meaning “understanding, perception”. One might say, for example, “half the clues in Saturday’s crossword are beyond my ken, beyond my understanding”.

70. Swiftly built home? : NEST
Swifts are birds that are related to hummingbirds. Swifts are aptly named, with larger swift species clocked at airspeeds of over 100 miles/hour.

71. Cable channel that airs “Portlandia” : IFC
“Portlandia” is a satirical sketch show that is aired on the Independent Film Channel (IFC). The show is set in Portland, Oregon and takes its name from a statue called “Portlandia” which sits above the entrance to a building in downtown Portland. The statue is a copper repoussé work, and is second in size in the US only to the Statue of Liberty.

4. Wallop : SHELLAC
“To shellac” is a slang term meaning “to defeat decisively, to strike severely”.

5. Terminus of the Qingzang railway : TIBET
The Qingzang-Tibet railway runs almost 2,000 kilometers from the Chinese city of Xining on the Tibetan Plateau to Lhasa, the capital of Tibet.

7. City near Sparks : RENO
Sparks is a city in Nevada that lies on the eastern side of Reno. The city was called Harriman originally, after a Southern Pacific Railroad president, and then renamed Sparks after a Nevada State Governor. The first non-Native American settlement in the area developed mainly from cattle trading. Cattle that were driven from Missouri and bound for California would stop in the area now known as Sparks, resting up before the arduous trek across the Sierra Nevada mountains. A business grew that involved trading cattle weary from the first part of the journey, swapping them for fresh animals. The tired beasts were then rested and fattened up to be traded again the following year for the journey on to California.

11. Cosmopolitan, e.g. : MIXED DRINK
Like so many famous cocktails, the actual origins of the cosmopolitan are disputed. It is a nice drink though. One of the standard recipes is 4 parts citrus vodka, 1.5 parts Cointreau, 1.5 parts lime juice and 3 parts cranberry juice.

13. Computer acronym since the 1960s : ASCII
ASCII (American Standard Code for Information Interchange) lists codes for 32 “control” characters, as well as the 95 printable characters. These binary codes are the way that our computers can understand what we mean when we type say a letter, or a number. Unicode is a more contemporary standard, and is like “Ascii on steroids”, encompassing more characters.

28. 1971 documentary about Ravi Shankar : RAGA
The 1971 documentary “Raga” is about the life and music Ravi Shankar, the Indian sitar player. Most of the footage for the film was shot in the sixties, and features some musicians from the West including Yehudi Menuhin and George Harrison.

44. Born on the bayou? : NEE
“Née” is the French word for “born” when referring to a female. The male equivalent is “né”.

The exact origins of the term “bayou” is uncertain, but it is thought perhaps to come from the Choctaw (a Native American people from the southeast) word “bayuk”, meaning “small stream”.

51. “The choice of a new generation” sloganeer, once : PEPSI
Pepsi has used many, many slogans over the years. The slogans range from “The Choice of a New Generation” featuring Michael Jackson in eighties and nineties, to the original “Twice as Much for a Nickel” that ran from 1939 to 1950.

54. Fly holder : PANTS
The term “fly” is used to describe the flap covering the buttons or zipper in the front of a pair of pants. Before “fly” was used for pants, it was the name given to a tent flap.

57. Harbinger : OMEN
A harbinger is a person or a thing that indicates what is to come. The word comes from the Middle English “herbenger”, a person sent ahead to arrange lodgings.

59. Isao in the Golf Hall of Fame : AOKI
Isao Aoki is one of Japan’s greatest golfers, now playing on the senior circuit. Aoki’s best finish in a major tournament was runner-up to Jack Nicklaus in the 1980 US Open.

60. Head of staff? : CLEF
Clef is the French word for “key”. In music, a clef is used to indicate the pitch of the notes written on the stave. The bass clef is also known as the F-clef, and the treble clef is the G-clef.

63. “Law & Order” spinoff, familiarly : SVU
“Law & Order: Special Victims Unit” is a spin-off from the TV crime drama “Law & Order”. “SVU” has been on the air since 1999, and is set in New York City. Interestingly, since 2007 there has been a very successful Russian adaptation of the show that is set in Moscow.