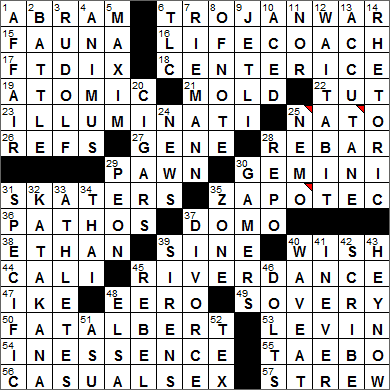 Today’s Wiki-est, Amazonian Googlies
Across
1. His name was lengthened by God at age 99 : ABRAM
According to the Book of Genesis, God said to Abram:
Neither shall thy name any more be called Abram, but thy name shall be Abraham; for a father of many nations have I made thee.

6. Theme in much Greek art : TROJAN WAR
According to Greek mythology, Helen was the daughter of Zeus and Leda. When Helen reached the age of marriage, she had many suitors as she was considered the most beautiful woman in the world. Menelaus was chosen as her husband, and he took her back to his home of Sparta. Paris, a Trojan prince, seduced Helen, as she eloped with him and travelled to Troy. This event sparked the Trojan War that waged between the city of Troy and Greece. Because of this war, Helen was said to have “the face that launched a thousand ships”. And because of this phrase, it has been suggested, probably by author Isaac Asimov, that the amount of beauty needed launch a single ship is one “millihelen”.

17. N.J. home of the “Ultimate Weapon” monument : FT DIX
“Ultimate Weapon” is a monument located in the grounds of Fort Dix in New Jersey. The monument comprises a 25-foot tall bronze statue depicting a US soldier. The original statue was installed in 1959 using less durable materials. The original was replaced with a bronze casting in 1990. The 1990 inscription reads “This monument is dedicated to the only indispensable instrument of war, The American Soldier— THE ULTIMATE WEAPON “If they are not there, you don’t own it.”

23. Group in many conspiracy theories : ILLUMINATI
Although there were several groups known as the Illuminati, the reference is usually to the Bavarian Illuminati founded in 1776. It was a secret society, and as such was the subject of many rumors and conspiracy theories, which eventually led to the Illuminati being banned by local government and the Roman Catholic Church. Famously, Dan Brown featured the Illuminati in his best-selling 2003 novel “Angels & Demons”.

25. Its flag is dark blue, symbolizing an ocean : NATO
The NATO flag was adopted by North Atlantic Treaty Organization in 1953, three years after the group was created. The flag consists of a white circle indicating “unity” against a blue background symbolizing the Atlantic Ocean. At the center of the flag is a compass rose.

27. Character builder? : GENE
DNA contains nucleotide base sequences called genes, that are blueprints for used in the manufacture of proteins needed by the body. Our DNA is also “decorated” with epigenetic markers that modify the activity level of genes, and can even turn genes off. These epigenetic markers respond to environmental conditions, so that organisms with the same DNA can exhibit differences in behavior and appearance, as a result of differing environments. This explains which identical twins develop differences in appearance over time.

28. Masonry-supporting rod : REBAR
A steel bar or mesh that is used to reinforce concrete is called “rebar”, short for “reinforcing bar”.

29. One getting an across-the-board promotion? : PAWN
In the game of chess, the pawns are the weakest pieces on the board. A pawn that can make it to the opposite of the board can be “promoted” to a piece of choice, usually a queen. Using promotion of pawns, it is possible for a player to have two or more queens on the board at one time. However, standard chess sets come with only one queen per side, so a captured rook is often used as the second queen by placing it on the board upside down.

30. Late-spring arrival : GEMINI
“Gemini” is the Latin word for “twins”.

31. Some Winter Olympians : SKATERS
The first Winter Olympic Games was held in 1924, in Chamonix, France. The Winter and Summer Games were held in the same year until 1992, after which they were staggered so that we have an Olympic Games every two years. Only one country has won a gold medal at each and every Winter Games, and that is the United States.

35. Mesoamerican language with 400,000+ speakers : ZAPOTEC
The Zapotec languages are spoken mainly by the Zapotec people from the southwestern-central highlands of Mexico, mainly located in the state of Oaxaca.

44. City famous for bad traffic? : CALI
In terms of population, Cali is the third largest city in Colombia (after Bogotá and Medellin). Santiago de Cali (the full name for the city) lies in western Colombia. Apparently, Cali is a destination for “medical tourists”. The city’s surgeons have a reputation for being expert in cosmetic surgery and so folks head there looking for a “cheap” nose job. Calia has also been historically associated with the illegal drug trade and money laundering.

45. Traveling show with the number “Trading Taps” : RIVERDANCE
The hugely successful Irish music and dance show “Riverdance” originated in 1994. In its first manifestation, the show was a relatively short entertainment created for the interval in the annual Eurovision Song Contest. A few months later, it was expanded into a full show that premiered in Dublin in early 1995. Since then, the show has traveled all over the world and has been seen by over 25 million people.

47. Half of a rhyming candy duo : IKE
Mike and Ike is a brandname of fruit-flavored candy made by Just Born starting in 1940. Just Born launched quite a clever marketing campaign in 2012 asserting that Mike and Ike had “split up due to creative differences”. The campaign involved production of two different boxes for the candy showing one or the other name scratched out. Clever …

48. First name in industrial design : EERO
Eero Saarinen was a Finnish American architect, renowned in this country for his unique designs for public buildings such as Gateway Arch in St. Louis, Dulles International Airport Terminal, and the TWA building at JFK. The list of his lesser-known, but still impressive, works includes several buildings erected on academic campuses. For example, the Chapel and Kresge Auditorium on the MIT campus, the Emma Hartman Noyes House at Vassar College, the Law School building at the University of Chicago, and Yale’s David S. Ingalls Rink.

50. Cartoon friend of Dumb Donald and Weird Harold : FAT ALBERT
Fat Albert is a character who was created by comedian Bill Cosby. The character starred in an animated television series called “Fat Albert and the Cosby Kids” that originally aired from 1972 to 1085. Fat Albert was voiced by Bill Cosby himself, and his catchphrase was “hey hey hey!”

53. “This Perfect Day” novelist, 1970 : LEVIN
“This Perfect Day” is a 1970 science fiction novel by Ira levin. It’s all about the world’s population under the control of a central computer named UniComp, and is often compared George Orwell’s’ “Nineteen Eighty-Four”.

55. Program with a “Get Ripped” version : TAE BO
Tae Bo isn’t an ancient martial art, and rather was developed as a form of aerobic exercise in the 1990s. The discipline was introduced by taekwondo expert Billy Blanks who gave it the name Tae Bo, a melding of “taekwondo” and “boxing”.

56. “Benefit” of some “friends” : CASUAL SEX
In recent years, a couple engaging in casual sex are often referred to as “friends with benefits”.

Down
3. Diesel who invented the diesel engine : RUDOLF
Rudolf Diesel was a German engineer, the inventor of the diesel engine. Diesel died under mysterious circumstances, having disappeared from a passenger vessel sailing from Antwerp to London. Whether death was due to an accident, suicide or murder is the subject of much speculation.

5. Popular pinup publication : MAXIM
“Maxim” is an international men’s magazine featuring revealing photo spreads (non-nude in the US) of female celebrities and models.

7. Mathematician with a hypothesis unproven since 1859 : RIEMANN
The Riemann zeta function has a significant place in mathematics, primarily (pun!) due to its relation to the distribution of prime numbers, which is encompassed in the Riemann hypothesis. The function was introduced by Leonhard Euler, but was extended by Bernhard Riemann after whom the function is named.

9. Beijing-born star of “Kiss of the Dragon” : JET LI
The actor Jet Li’s real name is Li Jian Jie. Jet Li is a martial artist and international film star from Beijing, China. Li played a villain in “Lethal Weapon 4”, and had a leading role in the 2000 movie “Romeo Must Die”.

13. Dermatological drug withdrawn by Roche in 2009 : ACCUTANE
Accutane is the brand name of the Hoffman-La Roche drug Isotretinoin. Primarily used to treat acne, the drug was withdrawn from the US market in 2009 after Hoffman-La Roche had paid out millions of dollars to settle lawsuits by users of the drug who claimed that it caused inflammatory bowel disease.

14. Stump speeches, often : RHETORIC
“To stump” can mean to go on a speaking tour during a political campaign. This peculiarly American term dates back to the 19th century. Back then a “stump speech” was an address given by someone standing on a large tree stump that provided a convenient perch to help the speaker get his or her message across to the crowd.

25. Marlin’s son, in an animated film : NEMO
In the 2003 animated feature “Finding Nemo”, a clownfish named Marlin is searching for his son Nemo who has been captured by a SCUBA diver.

29. Cog, so to speak : PEON
A peon is a lowly worker with no real control over his/her working conditions. The word comes into English from Spanish where it has the same meaning.

30. Call of Duty fans, e.g. : GAMERS
“Call of Duty” is a incredibly successful series of video games that started out life on computers and is now available for gaming consoles and handhelds. The first version of this war game was set in WWII, and an eighth version is in the works that features “Modern Warfare”.

32. Form of Japanese syllabic writing : KATAKANA
Katakana is a Japanese writing system (a kana) that is primarily used to write foreign words or official documents.

33. ___ foot : ATHLETE’S
The skin condition known as tinea is more usually referred to as ringworm. Tinea pedis is commonly known as athlete’s foot.

37. What “marriage is the chief cause of,” per Groucho Marx : DIVORCE
Groucho Marx’s real name was Julius Henry Marx. By the time Groucho started his successful, post-Hollywood career hosting the quiz show “You Bet Your Life”, he was sporting a real mustache. For all his movies, his mustache had been painted on with greasepaint.

51. Pac-12 sch. : ASU
Arizona State University (ASU) has a long history, founded as the Tempe Normal School for the Arizona Territory in 1885. The athletic teams of ASU used to be known as the Normals, then the Bulldogs, and since 1946 they’ve been called the Sun Devils.