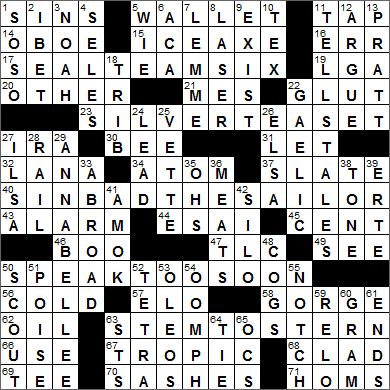 CROSSWORD SETTER: Zhouqin Burnikel
THEME: STS … each of today’s themed answers is a three-word phrase with the initials S-T-S:

17A. Navy special force in the bin Laden raid SEAL TEAM SIX
23A. Sterling service for an afternoon break SILVER TEA SET
40A. “Arabian Nights” voyager SINBAD THE SAILOR
50A. Say something before immediately being proven wrong SPEAK TOO SOON
63A. Completely STEM TO STERN

14. Slender woodwind OBOE
The oboe is perhaps my favorite of the reed instruments. The name “oboe” comes from the French “hautbois” which means “high wood”. When you hear an orchestra tuning before a performance you’ll note (pun intended!) that the oboe starts off the process by playing an “A”. The rest of the musicians in turn tune to that oboe’s “A”.

17. Navy special force in the bin Laden raid SEAL TEAM SIX
The US Special Forces unit that is popularly referred to as SEAL Team Six, is more correctly known as the US Naval Warfare Development Group (NSWDG). “SEAL Team Six” was actually the name of the unit’s predecessor, which was disbanded in 1987. The original group was created soon after the Iran hostage crisis of 1979. Two SEAL teams were deployed, and the name SEAL Team Six was used as a ruse in order to confuse the Russian intelligence services about the actual number of teams in existence.

19. Airport alternative to JFK LGA
Fiorello La Guardia was the Mayor of New York from 1934 to 1945, racking up three full terms in office. The famous airport that bears La Guardia’s name was built at his urging, stemming from an incident that took place while he was in office. He was taking a TWA flight to “New York” and was outraged when the plane landed at Newark Airport, in the state of New Jersey. The Mayor demanded that the flight take off again and land at a small airport in Brooklyn. A gaggle of press reporters joined him on the short hop and he gave them a story, urging New Yorkers to support the construction of a new commercial airport within the city’s limits. The new airport, in Queens, opened in 1939 as New York Municipal, often called “LaGuardia” as a nickname. The airport was officially relabeled as “LaGuardia” (LGA) in 1947.

23. Sterling service for an afternoon break SILVER TEA SET
Pure silver is too soft for use in production of the likes of knives and forks or salvers. So, it is converted into an alloy with a second metal, usually copper. The designation “sterling” is reserved for alloys containing 92.5% silver.

40. “Arabian Nights” voyager SINBAD THE SAILOR
Sinbad is the hero of a set of fictional tales from the Middle East. Sinbad comes from the port city of Basra and had fantastic adventures on voyages throughout the sea east of Africa and south of Asia.

44. Morales of “NYPD Blue” ESAI
The actor Esai Morales is best known for his role in the 1987 movie “La Bamba”, which depicted the life of Ritchie Valens and his half-brother Bob Morales (played by Esai).

57. “Livin’ Thing” band, 1976, informally ELO
The Electric Light Orchestra (ELO) is a symphonic rock group from the north of England. The band’s manager was Don Arden, father of Sharon Osbourne (wife of Ozzy).

70. Window frames SASHES
A movable (up and down) window frame is called a sash, from the French word for a frame “châssis”. The term is also applied to that part of a door or window into which windows are set.

71. War-torn Syrian city HOMS
Homs is a city in Syria in the west of the country, located just north of Damascus and not far from the Mediterranean coast.

Down
3. Ark builder NOAH
The term “ark”, when used with reference to Noah, is a translation of the Hebrew word “tebah”. The word “tebah” is also used in the Bible for the basket in which Moses was placed by his mother when she floated him down the Nile. It seems that the word “tebah” doesn’t mean “boat” and nor does it mean “basket”. Rather, a more appropriate translation is “life-preserver” or “life-saver”. So, Noah’s ark was Noah’s life-preserver during the flood.

4. Monica ___, two-time U.S. Open champ SELES
Monica Seles has a Hungarian name as she was born to Hungarian parents in former Yugoslavia. Seles was the World No. 1 professional tennis player in 1991 and 1992 before being forced from the sport when she was stabbed by a spectator at a match in 1993. She did return to the game two years later, but never achieved the same level of success.

5. Golfer Michelle WIE
Michelle Wie is an American golfer on the LPGA Tour. Wie began playing golf at the age of four and was the youngest player ever to qualify for an LPGA tour event. She turned pro just before her 16th birthday …

6. Obama’s signature health law, for short ACA
The correct name for what has been dubbed “Obamacare” is the “Patient Protection and Affordable Care Act” (ACA).

11. What a raconteur does TELLS TALES
A raconteur is an accomplished storyteller. The term comes from the French “raconter” meaning “to relate”.

13. Chris of “Jurassic World” PRATT
Chris Pratt is an actor who really got his big break playing the rather dopey Andy Dwyer on the sitcom “Parks and Recreation”. Pratt then played a pretty macho role as a SEAL team operator in “Zero Dark Thirty”, before taking leading heroic roles in “Guardians of the Galaxy” and “Jurassic World”. Pratt is married to Anna Faris, the comedic actress who plays Christy Plunkett on the sitcom “Mom”.

18. Chi-town daily TRIB
“The Chicago Tribune” was first published in 1847. The most famous edition of “The Trib” was probably in 1948 when the headline was “DEWEY DEFEATS TRUMAN”, on the occasion of that year’s presidential election. When it turned out Truman had actually won, the victor picked up the paper with the erroneous headline and posed for photographs with it … a famous, famous photo, that must have stuck in the craw of the editor at the time.

25. Sporty Chevy ‘VETTE
The Chevrolet Corvette was introduced to the world in 1953, and was named after the small maneuverable warship called a corvette. The Corvette has legs. It is the only American sports car that has been around for over 50 years.

26. 2013 film queen who sings “Let It Go” ELSA
“Let It Go” is an incredibly successful song from the Disney animated film “Frozen” released in 2013. It was performed in the movie by Idina Menzel, who also was the voice actor for the character Elsa. “Let It Go” is one of the very few Disney songs to make it into the Billboard Top Ten.

27. “Casablanca” woman ILSA
Ilsa Lund was played by Ingrid Bergman in the 1942 movie “Casablanca”. I love the words of one critic describing the chemistry between Bogart and Bergman in this film: “she paints his face with her eyes”. Wow …

29. Poe poem that concludes “In her tomb by the sounding sea” ANNABEL LEE
“Annabel Lee” was the last complete poem written by Edgar Allan Poe. The opening lines are:

41. Run ___ (rampage) AMOK
The phrase “to run amok” (sometimes “to run amuck”) has been around since the 1670s and is derived from the Malay word for “attacking furiously”, “amuk”. The word “amok” was also used as a noun to describe Malay natives who were “frenzied”. Given Malaya’s troubled history, the natives probably had good reason for that frenzy …

42. Farm tower SILO
“Silo” is a Spanish word that we absorbed into English, originally coming from the Greek word “siros” that described a pit in which one kept corn.

51. Aplomb POISE
“Aplomb” is such a lovely word, meaning confidence and assurance. It is a French word that literally means “perpendicularity”, or “on the plumb line”. The idea is that someone with aplomb is poised, upright, balanced.