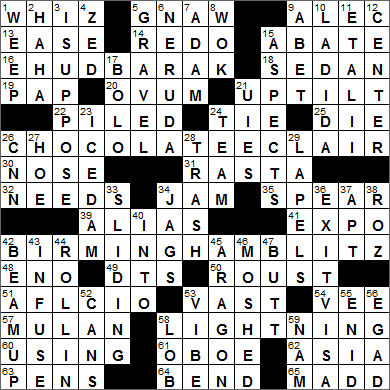 CROSSWORD SETTER: Jacob Stulberg
THEME: Lightning … each of today’s themed answers ends with the word LIGHTING, but in Hebrew, French and German:

Today’s Wiki-est, Amazonian Googlies
Across
9. One of the Baldwins : ALEC
Alec Baldwin is the oldest of the acting Baldwin brothers. I think Alec’s big break was playing Tom Clancy’s Jack Ryan in “The Hunt for Red October”, but thank goodness that role was taken over by Harrison Ford for the subsequent Jack Ryan movies. Baldwin is making a name for himself these days playing Jack Donaghy on “30 Rock”, opposite Tina Fey.

16. Israeli P.M. before Ariel Sharon : EHUD BARAK (“lightning” in Hebrew)
Ehud Barak served as Prime Minister of Israel from 1999 to 2001. Barak left office after he called a special election for Prime Minister and lost the vote to Ariel Sharon. Barak resigned from the Knesset and took an advisory job with the US company Electronic Data Systems (EDS), and did some security-related work with a private equity company. In 2007, Barak took over leadership of Israel’s Labor Party.

18. Honda Accord, e.g. : SEDAN
The American “sedan” car is the equivalent of the British “saloon” car. By definition, a sedan car has two rows of seating and a separate trunk (boot in the UK), although in some models the engine can be at the rear of the car.

19. Mushy fare : PAP
One meaning of “pap” is soft or semi-liquid food for babies and small children. “Pap” comes into English via French, from the Latin word used by children for “food”. In the 1500s, “pap” also came to mean “an oversimplified” idea. This gives us a usage that’s common today, describing literature or perhaps TV programming that lacks real value or substance. Hands up those who think there’s a lot of pap out there, especially on television …

25. Randomizing cube : DIE
The numbers on dice are arranged so that the opposite faces add up to seven. Given this arrangement, the numbers 1, 2 and 3 all meet at a common vertex. There are two ways of arranging the 1, 2 and 3 around the common vertex, a so called right-handed die (clockwise 1-2-3) or a left-handed die (counterclockwise 1-2-3). Traditionally, dice used in Western cultures are right-handed, whereas Chinese dice are left-handed. Quite interesting …

26. Custard-filled treat : CHOCOLATE ECLAIR (“lightning” in French)
The name for the pastry known as an “éclair” is clearly French in origin. The French word for lightning is “éclair”, but no one seems to be too sure how it came to be used for the rather delicious bakery item.

31. Worshiper of Jah, for short : RASTA
“Jah” is a shortened form of “Jehovah”, and is a name often associated with the Rastafari movement.

42. Luftwaffe attack on the British Midlands, 1940-43 : BIRMINGHAM BLITZ (“lightning” in German)
Birmingham is a large industrial city in the midlands of England that was subject to an intensive bombing campaign by the Luftwaffe from August 1940 through April 1943. Almost 2,000 bombs were dropped on Birmingham during WWII, making it the third most heavily city in the UK, after London and Liverpool.

48. Record producer Brian : ENO
Brian Eno is a musician, composer and record producer from England who first achieved fame as the synthesiser player with Roxy Music. As a producer, Eno has worked with David Bowie, Devo and U2.

49. Wino’s affliction, for short : DTS
The episodes of delirium that can accompany withdrawal from alcohol are called Delirium Tremens (the DTs). The literal translation of this Latin phrase is “trembling madness”.

51. Grp. formed in a 1955 merger : AFL-CIO
The American Federation of Labor (AFL) was founded in 1886, making it one of the first federations of unions in the country. Over time the AFL became dominated by craft unions, unions representing skilled workers of particular disciplines. In the early thirties, John L. Lewis led a movement within the AFL to organize workers by industry, believing this would be more effective for the members. But the craft unions refused to budge, so Lewis set up a rival federation of unions in 1932, the Congress of Industrial Organizations (CIO). The two federations became bitter rivals for over two decades until finally merging in 1955 to form the AFL-CIO.

57. Female warrior in a Disney movie : MULAN
“Mulan” is a 1998 animated feature film made by Walt Disney studios. The film is based on the Chinese legend of Hua Mulan, a woman who takes the place of her father in the army and serves with distinction for twelve years without reward. Disney’s lead character was given the name Fa Mulan. Donny Osmond provided the singing voice for one of the lead characters, after which his sons remarked that he had finally made it in show business as he was in a Disney film.

61. Woodwind descended from the shawm : OBOE
The shawm is a double-reed woodwind instrument that was at its height of popularity from the Middle Ages through the Renaissance. The name “shawm” came into English via a tortuous route from the Latin “calamus” meaning “reed”. The shawm lost its popularity with the arrival of the oboe family of instruments.

Down
4. End of the Oxford English Dictionary : ZED
The letter named “zed” has been around since about 1400, and derives from the Greek letter zeta. The spelling and pronunciation of “zee” used in America today first popped up in the 1670s, with “zed” persisting in the British Isles to this day.

The “Oxford English Dictionary” (OED) contains over 300,000 “main” entries and 59 million words in total. It is said it would take a single person 120 years to type it out in full. The longest entry for one word in the second edition of the OED is the verb “set”. When the third edition was published in 2007, the longest entry for a single word became the verb “put”. Perhaps not surprisingly, the most-quoted author in the OED is William Shakespeare, with his most quoted work being “Hamlet”. The most-quoted female author is George Eliot (aka Mary Ann Evans).

7. Old Testament patriarch : ADAM
According to the Bible, Eve was created as Adam’s companion by God, creating her from Adam’s rib.

8. Lo mein vessel : WOK
“Wok” is a Cantonese word, the name for the frying pan now used in many Asian cuisines.

9. Partner of aid : ABET
The word “abet” comes into English from the Old French “abeter” meaning “to bait” or “to harass with dogs” (it literally means “to make bite”). This sense of encouraging something bad to happen morphed into our modern usage of “abet” meaning to aid or encourage someone in a crime.

12. Tallest player on the court, usually : CENTER
That would be in basketball …

17. With 24-Across, item of western haberdashery : BOLO
(24A. See 17-Down : TIE)
I’ve never worn a bolo tie, and was surprised to discover that it is a relatively recent invention. The first bolo tie was apparently produced in Wickenburg, Arizona in the late 1940s by a silversmith. The bolo takes its name from the boleadora, an Argentine lariat.

24. Diamond nine : TEAM
That would be a baseball team.

26. Anderson Cooper’s channel : CNN
Anderson Cooper is a great news personality on CNN and on various shows around the dial. My favorite appearances of his, although he would call them trivial I am sure, was as host of a great reality game show called “The Mole” that aired in 2001.

34. Pricey British cars, for short : JAGS
Jaguar started out as a manufacturer of sidecars for motorcycles back in 1922, when the company was known as the Swallow Sidecar Company (SS for short). The company changed its name to Jaguar after WWII, because of the unfortunate connotations of the letters “SS” in that era (i.e. the Nazi paramilitary organization).

36. Permit to leave a country : EXIT VISA
A visa is a usually a stamp in one’s passport, an indication that one is authorized to enter (and less often “to exit”) a particular country. The word “visa” comes into English, via French, from the Latin expression “charta visa” meaning “paper that has been seen”, or “verified paper”.

38. The New Yorker cartoonist Chast : ROZ
Roz Chast had her first cartoon published in “The New Yorker” in 1978, and has had more than 800 published since then.

42. Bring back to the Enterprise, say : BEAM UP
There’s a story (not sure if it’s really true) about an Irishman who was being sentenced in the dock in a Dublin courtroom years ago. When asked by the judge, “Do you have anything to say before I pass sentence?”, the convicted man took out a pack of cigarettes from his pocket, flipped open the cardboard lid and brought the pack to his lips. He then said, “Beam me up, Scottie”.

45. Home to Henry VIII’s Catherine : ARAGON
Aragon is one of the autonomous communities of Spain, located in the northern part of the country on the border with France.

Catherine of Aragon was the first wife of King Henry VIII. Catherine had been married to Henry’s older brother Prince Arthur, who was the heir apparent to the English throne at that time of their betrothal. Arthur died, five months after the marriage, leaving Henry as heir. Almost eight years later, Catherine married the newly crowned Henry, in 1509. Famously, Catherine bore no living sons with Henry, but they did have a daughter who was later to become Queen Mary I. By 1525, the lack of sons and an infatuation with Anne Boleyn led Henry to seek an annulment of the marriage with Catherine. Pope Clement VII’s refusal to declare the marriage invalid led to Henry splitting with Rome and establishing the Church of England.

46. Danced in a “pit” : MOSHED
Moshing (also “slam dancing”) is the pushing and shoving that takes place in the audience at a concert (usually a punk or heavy metal concert). The area directly in front of the stage is known as the mosh pit. When a performer does a “stage dive” it is into (or I suppose “onto”) the mosh pit. It doesn’t sound like fun to me. Injuries are commonplace in the mosh pit, and deaths are not unknown.

55. Home of the Railroad Museum of Oklahoma : ENID
Enid, Oklahoma takes its name from the old railroad station around which the city developed. Back in 1889, that train stop was called Skeleton Station. An official who didn’t like the name changed it to Enid Station, using a character from Alfred Lord Tennyson’s “Idylls of the King”. Maybe if he hadn’t changed the name, the city of Enid would now be called Skeleton, Oklahoma! Enid has the nickname “Queen Wheat City” because is has a huge capacity for storing grain, the third largest grain storage capacity in the world.

59. Where Forrest Gump fought, for short : NAM
The epic 1994 movie “Forrest Gump” is based on a 1986 novel of the same name by Winston Groom. Groom said that he had envisioned John Goodman playing the title role, and not Tom Hanks.