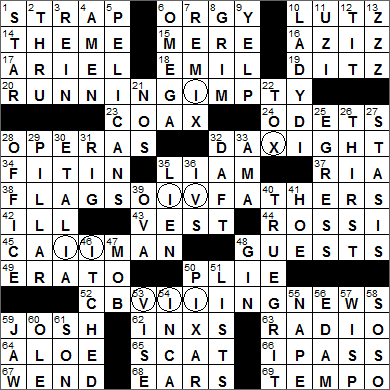 Today’s Wiki-est, Amazonian Googlies
Across
10. Skater’s leap : LUTZ
In figure skating, a Lutz is a toe-pick-assisted jump that one starts skating backwards and ends skating backwards (there’s more to it that I don’t really understand!). The maneuver is named after Alois Lutz, an Austrian skater who first performed it in competition way back in 1913. Lutz wowed the crowd with a single jump, and today both men and women are landing triple Lutz jumps. No one has landed a clean quadruple Lutz in competition.

17. Disney character who sings “Part of Your World” : ARIEL
“The Little Mermaid” is a 1989 animated feature from Disney that is based on the Hans Christian Andersen fairy tale of the same name. It tells the story of a mermaid princess named Ariel who falls in love with the human Prince Eric. Ariel’s father is chief merman King Triton.

18. Jannings who won the first-ever Oscar : EMIL
Emil Jannings was an actor from Switzerland, who also held German and Austrian citizenship. Jannings was the first person to receive an Oscar, as the star of the 1928 silent movie called “The Last Command”. He also starred opposite Marlene Dietrich in the 1930 classic “The Blue Angel”.

23. Inveigle : COAX
To coax is to cajole, to influence using gentle persuasion. Back in the 16th century, “coax” was a a noun meaning “fool”, and was used in the sense of “make a coax of, make a fool of”.

“To inveigle” is to win over by deceit. Back in the late 1400s, the term meant “to blind someone’s judgment”.

24. Group Theatre playwright of the 1930s : ODETS
Clifford Odets was a playwright, screenwriter and director from Philadelphia. Odets wrote a play called “Golden Boy” that was first performed in 1937 on Broadway. There was a film adaptation released in 1939 that starred a young William Holden. “Golden Boy” was the film that launched Holden’s career. There was also a 1964 musical of the same name that was based on the play.

28. Works of Carl Maria von Weber : OPERAS
Carl Maria von Weber was a composer from Germany who was active in the early Romantic period. Weber was an accomplished pianist and wrote many works for the instrument. However, he had very large hands and wrote pieces that suited his anatomy, and not performers with the average size of hands. As a result, Weber’s piano music is not performed very often.

35. One of the acting Hemsworths : LIAM
Liam Hemsworth is an Australian actor who is best known these days for playing Gale Hawthorne in “The Hunger Games” series of films. Hemsworth met Miley Cyrus while working on the movie “The Last Song”, and the two actors were engaged for a while. Liam is a younger brother of actor Chris Hemsworth, who plays the superhero “Thor” on the big screen.

43. Bit of SWAT garb : VEST
SWAT is an acronym standing for Special Weapons and Tactics. The first SWAT team was pulled together in the Los Angeles Police Department in 1968.

44. Carlo ___ (wine brand) : ROSSI
Carlo Rossi is a brand of wine produced by E & J Gallo. The name was chosen in honor of a salesman working for the winery named Charles Rossi, who was also a member of the Gallo family by marriage. Charles Rossi used to appear in TV ads for the wine in seventies.

45. DC Comics character with a whip : CATWOMAN
Catwoman is a supervillain who is usually depicted as an adversary of Batman in comics. In the sixties television show “Batman”, Catwoman was first portrayed by actress Julie Newmar, but then the more memorable Eartha Kitt took over, with the marvelously “feline voice”. On the big screen, Catwoman has been played by Lee Meriwether in “Batman” (1966), by Michelle Pfeiffer in “Batman Returns” (1992), by Halle Berry in “Catwoman” (2004) and by Anne Hathaway in “The Dark Knight Rises” (2012).

49. Lyre player of mythology : ERATO
In Greek mythology, Erato was the Muse of lyric poetry and is often depicted playing a lyre.

50. Move often preceding a pirouette : PLIE
The French word for “bent” is “plié”. In the ballet move known as a plié, the knees are bent.

We took our word “pirouette” directly from French, in which language it has the same meaning, i.e. a rotation in dancing. “Pirouette” is also the French word for a spinning top.

52. Rather informative program, once? : CBS EVENING NEWS
“CBS Evening News” first went on the air in 1948. Back then, the program was known as “CBS Television News”, changing to “CBS Evening News” in 1963. The list of anchors for the show includes Walter Cronkite, Dan Rather, Bob Schieffer and Katie Couric.

62. “Suicide Blonde” band, 1990 : INXS
INXS (pronounced “in excess”) was a rock band from Australia. The band formed in 1977 in Sydney as the Farriss Brothers, as three of the original lineups were indeed brothers.

63. Medium for Biggie Smalls : RADIO
The Notorious B.I.G. was the stage name of rap star Christopher Wallace, who also went by the names Biggie Smalls and Biggie. While at the height of his fame Wallace was killed in a drive-by shooting in Los Angeles, a murder case that has never been solved. The 2009 movie “Notorious” is about Wallace’s life and stars fellow rap artist Jamal Woolard (aka Gravy) in the title role.

65. “Out! I said out!” : SCAT!
Our word “scat”, meaning “get lost!” comes from a 19th-century expression “quicker than s’cat”, which meant “in a great hurry”. The original phrase probably came from the words “hiss” and “cat”.

68. Antennae, so to speak : EARS
An antenna’s job is to convert electrical power into radio waves, and radio waves into an electrical signal. The first antennas were built by the German physicist Heinrich Hertz in 1888.

Down
1. One of 12 in the European Union logo : STAR
The reverse side of euro coins feature a common design, a design that includes the 12-stars featured on the Flag of Europe. The number of stars is not related to the number of states in the European Union, nor has it ever been. The number of stars in the design was the subject of much debate prior to its adoption in 1955 by the Council of Europe. Twelve was a deliberate choice, as at that time there was no political connotation, and twelve was considered to be a symbol of unity.

4. Emphatic agreement : AMEN
The word “amen” is translated as “so be it”. “Amen” is said to be of Hebrew origin, but it is likely to be also influenced by Aramaic and Arabic.

5. Expert divers : PELICANS
The pelican is an example of a “piscivore”. A piscivorous animal is actually a carnivore, but one that lives on fish.

6. The end : OMEGA
Omega is the last letter of the Greek alphabet and is the one that looks like a horseshoe. The word “omega” literally means “great O” (O-mega). Compare this with the Greek letter Omicron meaning “little O” (O-micron).

7. D.J.’s play : REMIX
The world’s first radio disk jockey was one Ray Newby of Stockton, California who made his debut broadcast in 1909, would you believe? When he was 16 years old and a student, Newby started to play his records on a primitive radio located in the Herrold College of Engineering and Wireless in San Jose. The records played back then were mostly recordings of Enrico Caruso.

10. Part of the “wedding of the century” : LADY DI
Charles, Prince of Wales married Lady Diana Spencer in 1981 at St. Paul’s Cathedral in London. The wedding was a huge television event, with about 750 million people tuning in worldwide. Although the event was billed as a fairytale wedding, the couple separated in 1992 and divorced in 1996.

11. Strong arm : UZI
The first Uzi submachine gun was designed in the late 1940s by Major Uziel “Uzi” Gal of the Israel Defense Forces, who gave his name to the gun.

35. Financial claim : LIEN
A lien is the right that one has to retain or secure someone’s property until a debt is paid. When an individual takes out a car loan, for example, the lending bank is usually a lien holder. The bank releases the lien on the car when the loan is paid in full.

36. They’re often stuck in the I.C.U. : IVS
One might see intravenous drips (IVs) in an intensive care unit (ICU).

48. Certain spirit : GIN
The spirit known as gin gets its unique flavor mainly from juniper berries. The name “gin” comes into English from the translation of “juniper” from either French (genièvre), Dutch (jenever) or Italian (ginepro).

50. “Cars” producer : PIXAR
“Cars” is a 2006 animated feature from Pixar. The great cast of voice actors includes Paul Newman in his last movie role before he passed away in 2008.

54. Sun worshipers : INCA
Inti was the sun god worshiped by the Incas. Images depicting Inti are featured on the national flags of several nations, including Argentina and Uruguay.

56. Town whose exports are waxed : EDAM
Edam cheese takes its name from the Dutch town of Edam in North Holland. The cheese is famous for its coating of red paraffin wax, a layer of protection that helps Edam travel well and prevents spoiling. You might occasionally come across an Edam cheese that is coated in black wax. The black color indicates that the underlying cheese has been aged for a minimum of 17 weeks.