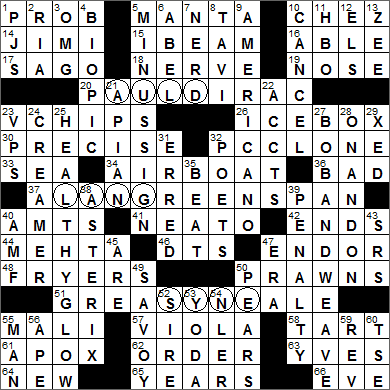 20A. Physics Nobelist who pioneered in quantum mechanics : PAUL DIRAC
37A. Federal Reserve chairman under four presidents : ALAN GREENSPAN
51A. Football Hall-of-Famer with a nickname befitting his elusiveness on the field : GREASY NEALE

Today’s Wiki-est, Amazonian Googlies
Across
5. Big ray : MANTA
The manta ray is the biggest species of ray, with the largest one recorded at over 25 feet across and weighing 5,100 pounds.

10. At the home of, abroad : CHEZ
“Chez” is a French term meaning “at the house of”, which comes from the Latin word “casa” meaning “cottage” or “hut”.

14. Last performer at Woodstock, informally : JIMI
Many of his contemporaries regarded Jimi Hendrix as the greatest electric guitarist in the history of rock music. Hendrix was from Seattle and didn’t really have a really stellar start to his working life. He failed to finish high school and fell foul of the law by getting caught in stolen cars, twice. The courts gave him the option of the army or two years in prison. Hendrix chose the former and soon found himself in the famous 101st Airborne. In the army, his less-than-disciplined ways helped him (as he would have seen it) because his superiors successfully petitioned to get him discharged after serving only one year of his two-year requirement, just to get him out of their hair.

17. Palm starch : SAGO
When I was growing up in Ireland I was very familiar with pearl sago, which is very similar to pearl tapioca. Pearls of sago are simply little balls of sago starch used to make breads, pancakes, biscuits, or the steamed puddings that we ate as kids. Sago comes from pith of the sago palm tree. To get at the starch the tree has to be cut down and the trunk split to reveal the pith. The pith is crushed and manipulated to make the starch available, which is then washed out of a fibrous suspension. One sago palm tree yields about 150-300 kg of starch. Personally I love the stuff, but then, I am a bit weird …

18. Chutzpah : NERVE
Our word “chutzpah” meaning “nerve, gall, impudence” is derived from the Yiddish “khutspe”, which has the same meaning.

20. Physics Nobelist who pioneered in quantum mechanics : PAUL DIRAC
Paul Dirac was an English theoretical physicist, and a co-winner of the Nobel Prize for Physics in 1933. It was Dirac who predicted the existence of antimatter. What would the Starship Enterprise have done without antimatter?

23. TV monitors? : V-CHIPS
All television sets produced for the US market since the year 2000 have to include a component called a V-chip. A V-chip allows a TV to be configured so that programming of specific “ratings” can be blocked from viewing. The “V” in V-chip stands for “viewer control”. It sounds like a great idea, but a lot of kids these days quickly do a search online and work out how to reset the password.

26. Antarctica, so to speak : ICEBOX
Antarctica is a continent, one covered with a permanent ice shelf. The Arctic, on the other hand, is in effect an ocean that is covered with year-round ice caps.

32. Old knockoff of an IBM product : PC CLONE
In the early days of desktop computing, an IBM clone (also a “PC clone”) was a computer built by an IBM competitor that was designed to function just like an IBM, but without using any copyrighted material or trade secrets that were the intellectual property of IBM. Clones were always a competitive issue for IBM, and perhaps were part of the reason that IBM doesn’t make desktop computers today …

34. Everglades transport : AIRBOAT
An airboat is a boat with a flat bottom and aircraft type propeller on the stern that provides forward motion. The propeller is often connected to a small aircraft engine. Believe it or not, the first airboat was built in 1905 by a team led by Alexander Graham Bell, who famously invented the first practical telephone.

The Everglades are a tropical wetlands that cover much of southern Florida. The area was named “River Glades” by a British surveyor in 1773, and is suggested that poor transcription of the word “river” led to the use of “ever”. The southern 20% of the Everglades is a protected region that we know as Everglades National Park. The park is the third largest National Park in the lower 48 states, after Death Valley NP (the largest) and Yellowstone NP.

37. Federal Reserve chairman under four presidents : ALAN GREENSPAN
Alan Greenspan served as the Chairman of the Federal Reserve from 1987 to 2006, the longest anyone has held that post. He was appointed by President Reagan for a four-year term, and was reappointed by subsequent presidents until Greenspan retired. Outside of the world of economics, Greenspan is married to NBC journalist Andrea Mitchell, and back in the seventies he even dated Barbara Walters.

42. Many rushers : ENDS
That would be American football …

44. Maestro Zubin : MEHTA
Zubin Mehta is an Indian conductor of western classical music, from Mumbai. Mehta studied music in Vienna, where he made his conducting debut in 1958. In 1961 he was named assistant director of the Los Angeles Philharmonic, creating a fuss with the music director designate of the orchestra, Georg Solti. Solti resigned as a protest, and Mehta took his job. In 1978 Mehta took over as Music Director and Principal Conductor of the New York Philharmonic, eventually becoming the longest holder of that position.

46. The shakes, for short : DTS
The episodes of delirium that can accompany withdrawal from alcohol are called Delirium Tremens (the DTs). The literal translation of this Latin phrase is “trembling madness”.

47. Moon in “Return of the Jedi” : ENDOR
In the “Star Wars” universe, the moon of Endor is home to the Ewoks. The Ewoks are creatures who first appear in “Star Wars Episode VI: Return of the Jedi”. They’re the cute and cuddly little guys that look like teddy bears.

50. Big shrimp : PRAWNS
The terms “prawn” and “shrimp” are often used interchangeable on menus. Over in the UK, the term “prawn” is most common, while “shrimp” is seen more often here in North America. Sometimes there is a differentiation from a food standpoint, with “prawn” being used for larger species and “shrimp” for smaller species. As a result, “jumbo prawns” seems to be an acceptable descriptor for a dish, whereas “jumbo shrimp” seems to be an oxymoron.

51. Football Hall-of-Famer with a nickname befitting his elusiveness on the field : GREASY NEALE
Greasy Neale was head coach of the Philadelphia Eagles from 1941-1950.

55. Bamako is its capital : MALI
Bamako is the capital of the African country of Mali. It is the fastest growing city on the whole continent. Located on the Niger River, the name “Bamako” translates from the local language as “crocodile river”.

63. Part of Y.S.L. : YVES
Yves Saint-Laurent (YSL) was a French fashion designer, actually born in Algeria. Saint-Laurent started off working as an assistant to Christian Dior at the age of 17. Dior died just four years later, and as a very young man Saint-Laurent was named head of the House of Dior. However, in 1950 Saint-Laurent was conscripted into the French Army and ended up in a military hospital after suffering a mental breakdown from the hazing inflicted on him by his fellow soldiers. His treatment included electroshock therapy and administration of sedatives and psychoactive drugs. He was released from prison, managed to pull his life back together and started his own fashion house. A remarkable story …

64. With 65- and 66-Across, when to sing the song in the shaded squares : NEW
65. See 64-Across : YEAR’S
66. See 64-Across : EVE
The song “Auld Lang Syne” is a staple at New Year’s Eve (well, actually in the opening minutes of New Year’s Day). The words were written by Scottish poet Robbie Burns. The literal translation of “Auld Lang Syne” is “old long since”, but is better translated as “old times”. The sentiment of the song is “for old time’s sake”.

Down
1. One- or two-piece attire, for short : PJS
Our word “pajamas” (“PJs” for short) comes to us from the Indian subcontinent, where “pai jamahs” were loose fitting pants tied at the waist and worn at night by locals and ultimately by the Europeans living there. And “pajamas” is another of those words that I had to learn to spell differently when I came to America. In the British Isles the spelling is “pyjamas”.

3. Modern version of “Jumping Jehoshaphat!” : OMG
OMG is text-speak for Oh My Gosh! Oh My Goodness! or any other G words you might think of …

4. “Lincoln” or “Gandhi” : BIOPIC
The 2012 movie “Lincoln” is a historical drama that portrays the last four months of the life of President Abraham Lincoln. The main focus in the story is Lincoln’s work to have the US House of Representatives pass the Thirteenth Amendment to the US Constitution, the amendment that finally abolished slavery. “Lincoln” was co-produced and directed by Steven Spielberg and stars Daniel Day-Lewis and Sally Field and Abraham and Mary Todd Lincoln. It’s a film I’d recommend …

“Gandhi” is a fabulous film released in 1982 that chronicles the life and times of Mahatma Gandhi. The film stars Ben Kingsley in the title role, and was directed by Sir Richard Attenborough. “Gandhi” won eight Oscars, including the award for Best Picture.

8. Rikki-tikki-___ : TAVI
In Rudyard Kipling’s “The Jungle Book”, one of the short stories is titled “Rikki-Tikki-Tavi”, the story about a mongoose, the brave pet of an English family that protects them from a succession of snakes.

9. Yanqui : AMERICANO
In Spanish, an “Americano” (American) might be called a “Yanqui” (Yankee), although the term is often used in a derogatory fashion.

The term “Yankee” originated back in the 1600s when Dutch settlers used to called English colonists “Jankes”, a disparaging term meaning “Little Johns”.

12. Center of excellence? : ELS
There are two letters L (els) in the center of the word “excellence”.

21. Beelike : APIAN
Something described as “apian” is related to bees. “Apis” is the Latin for “bee”.

35. With 32-Down, 1950s counterculture figures : BEAT
32. See 35-Down : POETS
The group of American writers known as the Beat Generation first came to prominence at a poetry reading at the Six Gallery in San Francisco in October of 1955. Five young poets presented their work that day:

38. French comic series that has sold 350+ million copies worldwide : ASTERIX
“The Adventures of Asterix” is a series of comics originally published in French, starting in 1959. The French version was a very popular choice for us as kids when we were required to read some French “literature” at school.

40. Big inits. in bowling : AMF
AMF Bowling Centers, Inc. is an operator of bowling allies, the largest such company in the world in fact.

49. Last royal house of Italy : SAVOY
The House of Savoy was founded in 1003 in the historic Savoy region of Europe that took in parts of modern France, Italy and Switzerland. The descendent House of Savoy-Carignano ruled the Kingdom of Italy from 1861 until the end of WWII.

53. Film character who says “Adventure. Excitement. A Jedi craves not these things” : YODA
Yoda is one of the most beloved characters of the “Star Wars” series of films. Yoda’s voice was provided by the great modern-day puppeteer Frank Oz of “Muppets” fame.

59. Title for M.L.K. Jr. : REV
Martin Luther King, Jr. was only 35 years old when he won the Nobel Peace Prize, making him the youngest person to be so honored. King was given the award for his work to end racial segregation and discrimination using non-violent means. The following year he was awarded the American Liberties Medallion by the American Jewish Community.

60. Trading place in Japan: Abbr. : TSE
The Tokyo Stock Exchange (TSE) is the third largest stock exchange in the world, after New York and London.