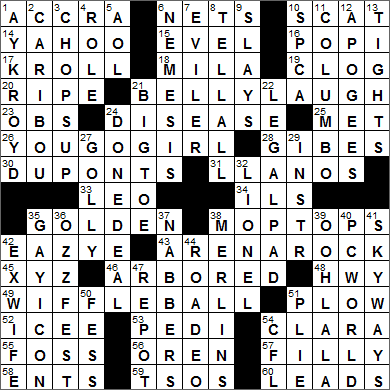 Today’s Wiki-est, Amazonian Googlies
Across
1. Gulf of Guinea metropolis : ACCRA
Accra sits on Ghana’s coast and is a major seaport as well as the country’s capital city. The name “Accra” comes from a local word “Nkran” meaning “ants”, a name chosen because of the large number of anthills found in the area when the city was founded.

10. Nonsense in a recording studio : SCAT
Scat singing is a vocal improvisation found in the world of jazz. There aren’t any words as such in scat singing, just random nonsense syllables made up on the spot.

15. First name of the “father of extreme sports” : EVEL
Daredevil Evel Knievel contracted hepatitis C from the many blood transfusions that he needed after injuries incurred during stunts. He had to have a liver transplant as a result, but his health declined after that. Knievel eventually passed away in 2007.

17. Comedian Nick with a self-titled Comedy Central show : KROLL
Nick Kroll is an actor and comedian who appeared on the FX sitcom “The League” and now stars in the Comedy Central sketch comedy series “Kroll Show”. Kroll is dating fellow comedian Amy Poehler.

18. ___ 18 (title setting of a 1961 novel) : MILA
“Mila 18” is a novel by American author Leon Uris that is set during WWII in Warsaw, Poland after the occupation by Germany. The book’s title refers to the bunker that served as headquarters of the Jewish resistance group in the Warsaw Ghetto. The bunker was located at “Ulica Mila 18” (“18 Pleasant Street” in English).

30. Influential industrial family : DUPONTS
The full name of the DuPont company is E. I. du Pont de Nemours and Company. This American chemical company was founded as a gunpowder mill in 1802 by one Eleuthere Irenee du Pont. Du Pont was born in Paris, and immigrated to the US with his rather large family in 1800 and settled in Brandywine Creek in Delaware. Back in France, du Pont had been an assistant to the celebrated French chemist Antoine-Laurent Lavoisier (“father of modern chemistry” and the man who discovered and named “oxygen”).

31. Grasslands : LLANOS
“Llano” is the Spanish word for “plain”.

33. Regulus’s constellation : LEO
Regulus is the brightest star in the constellation of Leo. Regulus is a multiple star and what we see as one entity is actually made up of four stars rotating around a common center of mass. “Regulus” is Latin for “prince”.

34. Foreign pronoun that sounds like a fish : ILS
“Ils” is the French for “they”, if not referring to feminine nouns (when “they” translates as “elles”).

38. Fab Four, early on : MOP-TOPS
The classic Beatles haircut was called the mop-top. Apparently John Lennon and Paul McCartney saw someone wearing the style in Hamburg, and they liked it. The pair hitchhiked from Hamburg to Paris, and once at their destination had their hair cut that way for the first time.

42. Rapper who publicly feuded with Dr. Dre : EAZY-E
Eazy-E was the stage name of rapper Eric Lynn Wright. Eazy-E had a pretty liberal lifestyle, fathering seven children with six different women. In 1995, he died due to complications from AIDS. He was only 32 years old.

43. Queen’s domain : ARENA ROCK
“Arena rock” (also “stadium rock”) is a rock music played in large arenas. It is a phenomenon that dates back to the British Invasion when successful bands like the Beatles played to large audiences in places such as Shea Stadium in New York.

45. End of a kindergarten run : XYZ
“Kindergarten” is a German term, literally meaning “children’s garden”. The term was coined by the German education authority Friedrich Fröbel in 1837, when he used it as the name for his play and activity institute that he created for young children to use before they headed off to school. His thought was that children should be nourished educationally, like plants in a garden.

48. Any I, e.g.: Abbr. : HWY
The US Interstate System is more correctly known as the Dwight D. Eisenhower National System of Interstate and Defense Highways, a nod to President Eisenhower who championed the construction. The President had come to recognise the value of the German autobahn system in his experiences during WWII, and resolved to give the US a similar infrastructure. In real terms, the US Interstate construction project is said to have been the largest public works project since the Pyramids of Egypt.

49. Game named for a synonym of “strikeout” : WIFFLE BALL
Wiffle ball is a “short range” version of baseball that is played with a light, perforated, plastic ball and a light plastic bat. The wiffle ball was invented in 1953 by David N. Mullany for his 12-year-old son. His son referred to strikeouts as “whiffs”, which gave the invention its name.

54. Santa ___ University : CLARA
Santa Clara University is a private, Jesuit school in Santa Clara, California. The first of its colleges was founded in 1851, making it the oldest higher education institute in the whole state.

55. Conductor Lukas : FOSS
Lukas Foss was an American composer, born as Lukas Fuchs in Berlin in 1922. Foss was a lifelong friend of fellow composer Leonard Bernstein.

57. Rare Belmont winner : FILLY
There are lots of terms to describe horses of different ages and sexes, it seems:

Vertigo is a Latin word meaning “dizziness” and has the same meaning in English. The Latin term comes from the Latin verb “vertere”, which means “to turn”.

59. Chinese menu possessive : TSO’S
General Tso’s chicken is an American creation, often found on the menu of a Chinese restaurant. The name General Tso may be a reference to General Zuo Zongtang of the Qing Dynasty, but there is no clear link.

Down
1. “Brother” player of old TV and film : AYKROYD
Dan Aykroyd is a Canadian comedian and actor, born in Ottawa, Ontario, although he is now a naturalized US citizen. He was of course an original cast member on “Saturday Night Live” and, along with John Belushi, fronted the Blues Brothers.

The Blues Brothers is a blues band created in 1978 for a Saturday Night Live sketch. The original Blues Brothers were Dan Aykroyd (Elwood Blues) and John Belushi (“Joliet” Jake Blues).

2. Image on the back of a Canadian quarter : CARIBOU
Caribou is the North American name for reindeer.

6. Moby Dick, to Ahab : NEMESIS
Nemesis was a Greek goddess, the goddess of retribution. Her role was to make pay those individuals who were either haughty or arrogant. In modern parlance, one’s nemesis (plural “nemeses”) is one’s sworn enemy, often someone who is the exact opposite in character but someone who still shares some important characteristics. A nemesis is often someone one cannot seem to beat in competition.

10. Pound sign? : SPCA
Unlike in most developed countries, there is no “umbrella” organization in the US with the goal of preventing cruelty to animals. Instead there are independent organizations set up all over the nation using the name SPCA. Having said that, there is an organization called the American Society for the Prevention of Cruelty to Animals (ASPCA) that was originally intended to operate across the country, but really it now focuses its efforts in New York City.

11. Disheveled TV lieutenant : COLUMBO
“Columbo” is a police drama that aired from 1971-78, with some more episodes made as recently as 2003. Columbo was of course played by Peter Falk, although the character of Columbo was first played by Bert Freed in 1960 in an episode of “The Chevy Mystery Show”. That first appearance was so successful that the episode was adapted for the stage in 1962, with Thomas Mitchell taking on the role. Then the same episode was stretched into a TV movie in 1968, with Peter Falk playing Lt. Columbo for the first time.

12. Peaks : APOGEES
In the celestial world, an apsis is a point in an orbit when the orbiting body is at its greatest, or least, distance from it’s center of orbit. The farthest and closest points of orbit are known as the apogee and perigee, when talking about bodies orbiting the Earth. The farthest and closest points for bodies orbiting the sun are known as the aphelion and perihelion.

21. It’s about six feet long on the Statue of Liberty : BIG TOE
The Statue of Liberty was a gift from the people of France to the United States. It was designed by Frédéric Bartholdi and was dedicated in 1886. If you take a boat ride down the Seine in Paris you will probably see a one-third replica of Lady Liberty standing on a small island in the river, looking quite magnificent. That copy was given to the people of Paris by the city’s American community in 1889.

32. Company with a long track record? : LIONEL
Lionel is the name most associated with toy trains in the US. The first Lionel trains rolled off the production line in 1901 and they are still produced today, although the original Lionel Corporation is long gone. In 1995, the brand was bought by an investment company that included train enthusiast Neil Young (the singer), and operated as Lionel, LLC. Neil Young’s financial involvement ended after a 2008 reorganization of the company following a Chapter 11 bankruptcy filing, but the company is still producing and selling.

35. Cher or Madonna : GAY ICON
Cher’s real name is Cherilyn Sarkisian, born in 1946. In her acting career, Cher was nominated for the Best Supporting Actress Oscar of 1984 for her performance in “Silkwood”. She went further in 1988 and won the Best Actress Oscar for playing Loretta Castorini in “Moonstruck”.

36. Tour often featuring Black Sabbath : OZZFEST
Ozzfest is a festival tour held annually that was founded by Ozzy and Sharon Osbourne. As one might expect, it’s a heavy metal and hard rock event.

Black Sabbath are an English heavy metal band set up in 1969 in Birmingham in the north of the country. Black Sabbath’s most famous band member was the lead singer, Ozzy Osbourne. Ozzy was kicked out of the group in 1979 as his drug usage was becoming overly disruptive.

44. Truck drivers’ competition : ROADEO
A “roadeo” is a competition held between drivers of buses or trucks. Obviously, the term is a play on the words “road” and “rodeo”.

50. Cop (to) : FESS
The term “fess” is most often seen as part of the phrasal verb “to fess up” meaning “to admit to something”. “Fess” is simply a shortened form of “confess”.