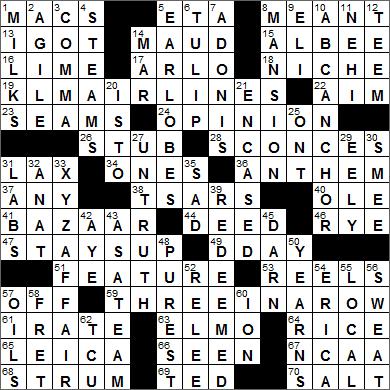 CROSSWORD SETTER: Jim Holland
THEME: Three in a Row … each of today’s themed answers starts with a series of three letters that are adjacent to each other in the alphabet:

59A. Tic-tac-toe win … or hint to the starts of the answers to the starred clues : THREE IN A ROW

Today’s Wiki-est, Amazonian Googlies
Across
5. When a flight is due in, for short : ETA
Estimated time of arrival (ETA)

14. Bond girl Adams : MAUD
Maud Adams played two Bond girls, in “The Man with the Golden Gun” and “Octopussy”, both times opposite Roger Moore as James Bond. Also, Adams was visiting her friend Roger Moore while he was shooting “A View to a Kill” and can be seen in the background in in one scene. So actually, Adams was in three Bond movies.

16. One of the two flavors in Sprite : LIME
Sprite is Coca-Cola’s answer to the very successful soft drink called 7 Up. Sprite was introduced in 1961, and Coca-Cola used its muscle to topple 7 Up from its dominant position in the market. Sprite has been the number-one selling lemon soda since 1978.

19. *Carrier to Amsterdam : KLM AIRLINES
The initialism KLM stands for “Koninklijke Luchtvaart Maatschappij”, which translates from Dutch as “Royal Aviation Company”. KLM is the flag carrier for the Netherlands, and is the oldest airline in the world still operating with its original name. It was founded in 1919. KLM merged with Air France in 2004.

28. Candle holders : SCONCES
A sconce is a light fixture that today uses electric bulbs, but in the past used candles and torches. The defining feature of a sconce is that it is supported by a wall and does not have a base that stands on the ground. Usually the light is indirect, projected upwards towards the ceiling.

31. Calif.’s largest airport : LAX
Los Angeles International Airport is the sixth busiest airport in the world in terms of passenger traffic, and the busiest here on the West Coast of the US. The airport was opened in 1930 as Mines Field and was renamed to Los Angeles Airport in 1941. On the airport property is the iconic white structure that resembles a flying saucer. This is called the Theme Building and I believe it is mainly used as a restaurant and observation deck for the public. The airport used to be identified by the letters “LA”, but when the aviation industry went to a three-letter standard for airport identification, this was changed to “LAX”. Apparently the “X” has no significant meaning.

36. “O Canada,” for one : ANTHEM
The word “anthem” used to describe a sacred song, especially one with words taken from the Scriptures. The British national anthem (“God Save the Queen/King”) technically is a hymn, and so it came to be described as the “national hymn” and eventually “national anthem”. The use of the word “anthem” extended from there to describe any patriotic song.

38. Old Russian rulers : TSARS
The term czar (also tsar) is a Slavic word that was first used as a title by Simeon I of Bulgaria in 913 AD. “Czar” is derived from the word “Caesar”, which was synonymous with “emperor” at that time.

49. 6/6/1944 : D-DAY
The most famous D-Day in history was June 6, 1944, the date of the Normandy landings in WWII. The term “D-Day” is used by the military to designate the day on which a combat operations are to be launched, especially when the actual date has yet to be determined. What D stands for seems to have been lost in the mists of time although the tradition is that D just stands for “Day”. In fact, the French have a similar term, “Jour J” (Day J), with a similar meaning. We also use H-Hour to denote the hour the attack is to commence.

59. Tic-tac-toe win … or hint to the starts of the answers to the starred clues : THREE IN A ROW
When I was growing up in Ireland we played “noughts and crosses” … our name for the game tic-tac-toe.

63. Adorable “Sesame Street” monster : ELMO
The man behind/under the character Elmo on “Sesame Street” is Kevin Clash. If you want to learn more about Elmo and Clash, you can watch the 2011 documentary “Being Elmo: A Puppeteer’s Journey”.

64. Dish that may be “sticky” : RICE
Sticky rice is actually a type of rice, and not a means of preparation. Sticky rice is more usually called “glutinous rice”, even though it does not contain dietary gluten.

65. German camera brand : LEICA
Leica is a German optics company, famous for production of lenses and cameras. The 1913 Leica was the first practical camera that could use 35mm film, a size chosen because it was already the standard for film used in motion pictures.

67. Org. overseeing the Big Ten and Big 12 : NCAA
The National Collegiate Athletic Association (NCAA) dates back to the Presidency of Theodore Roosevelt. When his son broke his nose playing football at Harvard, President Roosevelt turned his attention to the number of serious injuries and even deaths occurring in college sports. He instigated meetings between the major educational institutions leading to the formation of the Intercollegiate Athletic Association of the United States (IAAUS) in 1906, which was given the remit of regulating college sports. The IAAUS became the NCAA in 1910.

69. Title bear in a 2012 Seth MacFarlane comedy : TED
“Ted” is a movie written, directed, produced and starring Seth MacFarlane. In the story, MacFarlane voices a teddy bear who is the best friend of a character played by Mark Wahlberg.

6. Dutch bloom : TULIP
We usually associate the cultivation of tulips with the Netherlands, but they were first grown commercially in the Ottoman Empire. The name “tulip” ultimately derives from the Ottoman Turkish word “tulbend” which means “muslin, gauze”.

7. Good-looking guy : ADONIS
In Greek mythology, Adonis is a beautiful young god loved by Aphrodite. Adonis dies in a hunting accident (gored by a boar), but not before he gives Aphrodite a child. Adonis was originally a Phoenician god “absorbed” into Greek lore (Phoenicia is modern day Lebanon). The child born of Adonis to Aphrodite was called Beroe, after which is named Beirut, the capital city of Lebanon. We also use the term “adonis” to mean “beautiful male”.

9. Inventor Whitney : ELI
The inventor Eli Whitney is a best known for inventing the cotton gin. Whitney also came up with the important concept of “interchangeable parts”. Parts that are interchangeable can be swapped out of equipment or perhaps used in related designs.

10. *David Muir … or Peter Jennings, once : ABC ANCHOR
Journalist and TV anchor David Muir hosts the show “ABC World News Tonight with David Muir”. Apparently, Muir’s reporting received more airtime than any other American journalist in 2012 and 2013. Muir also made it onto “People” magazine’s list of Sexiest Men Alive in 2014.

11. Soda pop brand : NEHI
“Nehi Corporation” was the nickname for the Chero-Cola/Union Bottle Works that introduced the Nehi drink in 1924. Years later the company developed a new brand, Royal Crown Cola (also known as RC Cola). By 1955, RC Cola was the company’s flagship product, so the “Nehi Corporation” became the “Royal Crown Company”. In 1954, RC Cola became the first company to sell soft drinks in cans.

30. Captain Hook’s henchman : SMEE
In J. M. Barrie’s play and novel about Peter Pan, Smee is one of Captain Hook’s pirates and is Hook’s right-hand man. Smee is described by Barrie as being “Irish” and “a man who stabbed without offence”. Nice guy! Captain Hook and Smee sail on the pirate ship called the Jolly Roger.

33. *Diplomatic contretemps during John Adams’s administration : XYZ AFFAIR
During the administration of President John Adams, there was a drawn-out exchange between three American and three French diplomats in an attempt to avoid war between the two countries. The French diplomats made demands that were considered insulting by the US. Documents released by the Adams administration denoted the three French diplomats as simply X, Y and Z. There was public outcry when the documents were released and the demands disclosed, and the whole incident became known as the XYZ Affair. The end result was an undeclared war between the US and France with American ships capturing 80 vessels that flew the French flag.

52. Confederate genl.’s signature : RE LEE
Robert E. Lee is renowned as a southern officer in the Civil War. Lee was a somewhat reluctant participant in the war in that he opposed the secession of his home state of Virginia from the Union. At the beginning of the war, President Lincoln invited Lee to take command of the whole Union Army but he declined, choosing instead to stay loyal to his home state. During the Civil War, Lee’s men referred to him affectionately as “Marse Robert”, with “marse” being slang for “master”.

55. Kind of call that didn’t used to need an area code : LOCAL
Area codes were introduced in the 1940s. Back then the “clicks” one heard when dialling a number led to mechanical wear on various pieces of equipment. In order to minimize overall mechanical wear, areas with high call volumes were given the most efficient area codes (lowest number of clicks). That led to New York getting the area code 212, Los Angeles 213 and Chicago 313.

56. What you do in a sauna : SWEAT
As my Finnish-American wife will tell you, “sauna” is a Finnish word, and is correctly pronounced “sow-nah” (with “sow” as in the female pig).

62. Horned Frogs of the Big 12 Conf. : TCU
The athletic teams of Texas Christian University (TCU) are known as the TCU Horned Frogs. The Texas horned lizard is known colloquially as the “horned frog”.