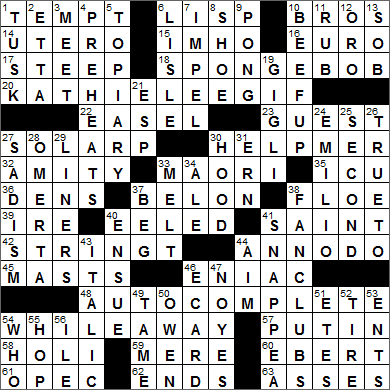 CROSSWORD SETTER: Andrew Zhou
THEME: Auto Complete … each of today’s themed answers needs to be AUTOCOMPLETED, COMPLETED by adding a type of AUTO:

Today’s Wiki-est, Amazonian Googlies
Across
6. Sigmatism : LISP
A “sigmatism” is a lisp, a difficultly in pronouncing the letter S. The term comes from “sigma” (S) and “ism”.

16. Not exactly old money : EURO
Euro coins are issued by all the participating European states. The reverse side is a common design used by all countries, whereas the obverse is a design specific to each nation. For example, the one euro coin issued by Malta features the Maltese Cross. That Maltese euro is legal tender right across the eurozone. Of course the Irish euro features a harp.

20. *TV celebrity who has owned both a clothing line and a wine brand : KATHIE LEE GIF(FORD)
Kathie Lee Gifford is most famous for working alongside Regis Philbin on the talk show “Live with Regis and Kathie Lee”, a stint that lasted for about 15 years.

22. What may give an artistic bias? : EASEL
The word “easel” comes from an old Dutch word meaning “donkey” would you believe? The idea is that an easel carries its load (an oil painting, say) just as a donkey would be made to carry a load.

27. *Nerve center in the abdomen that’s strongly affected by a punch : SOLAR P(LEXUS)
A nerve plexus is a network of intersecting nerves. One example of a plexus in the human body is the celiac plexus, also known as the solar plexus. The celiac plexus is a network of nerves in the abdomen that serves many of the internal organs.

33. Language akin to Tahitian : MAORI
The Māori are the indigenous people of New Zealand. The Māori are eastern Polynesian in origin and began arriving in New Zealand relatively recently, starting sometime in the late 13th century. The word “māori” simply means “normal”, distinguishing the mortal human being from spiritual entities.

35. Place with a lot of monitors, for short : ICU
Intensive Care Unit (ICU)

38. Arctic drifter : FLOE
An ice floe is a sheet of ice that has separated from an ice field and is floating freely on the ocean.

42. *Classical ensemble : STRING T(RIO)
Although not a hard-and-fast rule, a string trio usually comprises a violin, viola and cello.

44. *In the year of our Lord : ANNO DO(MINI)
The designations Anno Domini (AD, “year of Our Lord”) and Before Christ (BC) are found in the Julian and Gregorian calendars. The dividing point between AD and BC is the year of the conception of Jesus, with AD 1 following 1 BC without a year “0” in between. The AD/BC scheme dates back to AD 525, and gained wide acceptance soon after AD 800. Nowadays a modified version has become popular, with CE (Common/Christian Era) used to replace AD, and BCE (Before the Common/Christian Era) used to replace BC.

45. Pair on a ketch : MASTS
A ketch is a sailboat with two masts. The most forward mast is the mainmast, and is the taller of the two. The smaller mast is further aft, and is known as the mizzen mast.

46. 1946 creation originally intended to calculate ballistics tables : ENIAC
The acronym ENIAC stands for Electronic Numerical Integrator and Calculator (although many folks insist that the C was for “Computer”). ENIAC was the first general-purpose electronic computer. It was designed to calculate artillery firing tables, but it ended up being used early on to make calculations necessary for the development of the hydrogen bomb. Given its uses, it’s not surprising to hear that development of ENIAC was funded by the US Army during WWII.

61. Well-funded grp.? : OPEC
The Organization of the Petroleum Exporting Countries (OPEC) was founded in 1960 at a conference held in Baghdad, Iraq that was attended by Iraq, Kuwait, Iran, Saudi Arabia and Venezuela. Nine more countries joined the alliance soon after, and OPEC set up headquarters in Geneva, Switzerland and then Vienna, Austria in 1965. The basic aim of OPEC was to wrench control of oil prices from the oil companies and to put it in the hands of the sovereign states that own the natural resource.

Down
2. Kett of old comics : ETTA
“Etta Kett” was a comic strip that first ran in 1925. The strip ceased to be published in 1974, when creator Paul Robinson passed away. The initial intent was to offer tips to teenagers on manners and social graces, hence the name of the title character Etta Kett (sounds like “etiquette”).

6. Fine thread : LISLE
Lisle is a cotton fabric that has been through an extra process at the end of its manufacture that burns off lint and the ends of fibers leaving the fabric very smooth and with a clean edge.

9. Beer ___ : PONG
The game of beer pong is also known as “Beirut”. Beer pong reputedly originated as a drinking game in the fraternities of Dartmouth College in the fifties, when it was played with paddles and a ping pong net on a table. The origin of the “Beirut” name is less clear, but it probably was coined in while the Lebanese Civil War was raging in late seventies and the eighties.

A “rub” is a difficulty or obstruction. The usage predates Shakespeare, and comes from the game of lawn bowls in which a rub is a fault in the bowling surface.

19. 2003 Lopez/Affleck flop : GIGLI
Everyone wanted to see “Gigli” because it starred the couple of the day, Jennifer Lopez and Ben Affleck. Everyone wanted to see it, but nobody went it seems. Lots of folks have called it the worst film ever made. Apparently “Gigli” made only $6m after costing $54m to produce.

24. ___ Barzini, “The Godfather” don : EMILIO
Emilio Barzini (aka “the Wolf”) is the main antagonist in Mario Puzo’s “The Godfather”. In the film adaptation, Barzini is played by actor Richard Conte.

28. Mario Puzo sequel : OMERTA
The novelist and screenwriter Mario Puzo, was best known for his book “The Godfather”, which he also co-adapted for the big screen. Puzo also wrote two sequels, “The Last Don” and “Omertà”, that latter being published after his death. His name is less associated with some very famous screenplays that he wrote, including “Earthquake”, “Superman” and “Superman II”. Puzo won two Oscars for Best Adapted Screenplay: for “The Godfather” (1972) and for “The Godfather Part II” (1974).

34. It’s sold by the yard : ALE
A yard of ale is a very tall glass, one that is just under a yard (three feet) long. It holds about 60 fluid ounces of beer. I’ve tried drinking out of one, and it is extremely difficult. There is a bulb at the bottom of the glass. When you get towards the end of the drink, that bulb causes a kind of airlock and the remainder of the beer rushes to the top of the glass splashing you in the face.

38. Zine distributors, perhaps : FAN CLUBS
A fanzine (also “zine”) is a fan publication with a very limited circulation, dealing with a very specific subject matter. Fanzines are usually desktop published and distributed electronically or as photocopies.

41. Crunchy vegetable : SNAP PEA
Snap peas are also known as sugar peas. Snap peas are eaten before the seeds mature, and the whole pod is consumed.

50. Actor Clive of Cinemax’s “The Knick” : OWEN
English actor Clive Owen first grabbed the public’s eye in his native land in the early nineties, when he played the lead in a popular TV show called “Chancer” about a likable conman. More recently, Owen has been playing Dr. John W. Thackery on the Cinemax medical drama series “The Knick”.

56. Any one of the Marquises : ILE
The Marquesas Islands are known in French as the “Iles Marquises”. The Marquesas are a group of volcanic islands in French Polynesia in the Southern Pacific. In the 1500s the population of the Marquesas has been estimated at over 100,000. Then along come Western explorers, and western diseases. The Marquesas were hit the hardest by the introduction of diseases to which they had no resistance. By 1900 the ravaged population had been reduced to just over 2,000 people.