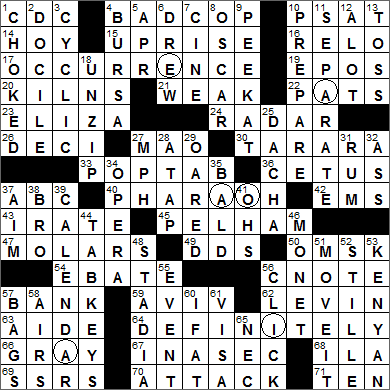 CROSSWORD SETTER: Ed Sessa
THEME: Mispelled (!) Clues … Happy Thanksgiving, everyone! We have ten clues that are misspelled today, and I “think” they are as follows:

71A. Number of mispelled words in this puzzle’s clues (oh, by the way, watch out for those tricky circled squares!) : TEN (should be “misspelled”)

We also have five answers in the grid that are commonly misspelled, but the circled letters are there to warn us to be careful. We have to be especially careful, as the common misspellings actually work in the grid:

17A. Incident : OCCURRENCE (often OCCURANCE in error)
6D. Set pencil to paper, in a way : DREW (or DRAW)

64A. Without a doubt : DEFINITELY (often DEFINATELY in error)
56D. Quick, sharp sound : CLICK (or CLACK)

Today’s Wiki-est, Amazonian Googlies
Across
1. Health-promoting org. : CDC
The Centers for Disease Control and Prevention (CDC) is based in Atlanta, Georgia. The CDC started out life during WWII as the Office of National Defense Malaria Control Activities. The CDC worries about much more than malaria these days …

4. One of a pair of grillers : BAD COP
Two officers grilling a suspect might play “good cop, bad cop”.

19. “Odyssey,” for one : EPOS
“Epos” is the Greek word for a story or a poem. We have absorbed it into English as “epic”, a long narrative poetic work describing heroic deeds and ventures.

23. Musical character who sings “Wouldn’t it be loverly?” : ELIZA
“Wouldn’t It Be Loverly” is song by Lerner and Loewe from the Broadway musical “My Fair Lady”. It is sung by the character Eliza Doolittle in her Cockney accent (hence the “loverly” spelling). “Wouldn’t It Be Loverly” was performed by Julie Andrews in the original stage production, and ostensibly by Audrey Hepburn in the 1964 film. Actually, Marni Nixon dubbed Hepburn’s voice, as Nixon did for Deborah Kerr in “The King and I”, and for Natalie Wood in “West Side Story”.

33. Beer can feature : POP TAB
The oldest method of opening a can with a device included in the can’s design is the pull-tab or ring pull, invented in Canada in 1956. The design was long-lived but it had its problems, so the world heaved a sigh of relief with the invention of the stay-on-tab in 1975. The new design led to less injuries and eliminated all those used pull-tabs that littered the streets.

36. Whale constellation : CETUS
Cetus is a constellation named after a sea monster from Greek mythology. Today, Cetus is often called “the Whale”.

37. Kindergarden song beginning : ABC
“The Alphabet Song” was copyrighted in 1835 in the US. The tune that goes with the words is the French folk song “Ah! vous dirai-je, Maman”, used by Mozart for a set of piano variations. The same tune is used for the nursery rhyme “Twinkle Twinkle Little Star”.

“Kindergarten” is a German term, literally meaning “children’s garden”. The term was coined by the German education authority Friedrich Fröbel in 1837, when he used it as the name for his play and activity institute that he created for young children to use before they headed off to school. His thought was that children should be nourished educationally, like plants in a garden.

40. Exodus figure : PHARAOH
The pharaohs were the kings of Ancient Egypt. The term “pharaoh” translates as “great house”, and was originally the name of the king’s palace.

The Book of Exodus is the second book in the Bible, and deals with Moses leading the Hebrews out of Egypt. The name “exodus” comes from the Greek “exodos” meaning “departure”.

45. New York’s ___ Bay Park : PELHAM
Pelham Bay Park is located in the Bronx, and is the largest park in New York City.

49. One concerned with 47-Across, for short : DDS
Doctor of Dental Surgery (DDS)

50. Trans-Siberian Railway hub : OMSK
Omsk is a city in southwest Siberia. It is located over 1400 miles from Moscow and was chosen as the destination for many internal exiles in the mid-1900s. Perhaps the most famous of these exiles was the author Fyodor Dostoyevsky.

Siberia is a vast area in Northern Asia. The region’s industrial development started with the construction of the Trans-Siberian railway from 1891 to 1916, which linked Siberia to Russia in the west.

56. Benjamin : C-NOTE
Benjamin Franklin is featured on one side of the hundred-dollar bill, and Philadelphia’s Independence Hall on the other side. There is a famous “error” in the image of Independence Hall. If you look closely at the clock face at the top of the building you can see that the “four” is written in Roman numerals as “IV” as perhaps one might expect. However, on the actual clock on Independence Hall, the “four” is denoted by “IIII”.

57. Carom : BANK
A carom is a ricochet, the bouncing of some projectile off a surface. Carom has come to mean the banking of a billiard ball, the bouncing of the ball off the side of the table.

62. “Rosemary’s Baby” author : LEVIN
As well as writing novels, Ira Levin was a dramatist and a songwriter. Levin’s first novel was “A Kiss Before Dying”, and his most famous work was “Rosemary’s Baby” which became a Hollywood hit. His best known play is “Deathtrap”, a production that is often seen in local theater (I’ve seen it a couple of times around here). “Deathtrap” was also was a successful movie, starring Michael Caine and Christopher Reeve. My favorite of Levin’s novels though are “The Boys from Brazil” and “The Stepford Wives”.

“Rosemary’s Baby” is a novel by Ira Levin. It is a horror story, and was made into a very creepy 1968 film of the same name starring Mia Farrow. Levin published a sequel in 1997 titled “Son of Rosemary”. He dedicated the sequel to Mia Farrow.

69. Moldova and Belarus, once: Abbr. : SSRS
The Republic of Moldova (usually referred to as “Moldova”) was the Moldavian Socialist Republic before the dissolution of the Soviet Union.

Down
4. Fluid-filled sac near a joint : BURSA
The synovial fluid that lubricate joints is contained within membrane-lined sacs called bursae. “Bursa” is Latin for “purse”.

5. Showery mo. : APR
The phenomenon of “April Showers” really applies to the UK and Ireland. Increased occurrence of rain during April is largely due to an annual change in the position of the jet stream.

8. Film award : OSCAR
The Academy of Motion Picture Arts and Sciences (AMPAS) is the organization that gives the annual Academy Awards also known as the “Oscars”. The root of the name “Oscar” is hotly debated, but what is agreed is that the award was officially named “Oscar” in 1939. The first Academy Awards were presented at a brunch in 1929 with an audience of just 29 people. The Awards ceremony is a slightly bigger event these days …

18. Drop, like flies? : UNZIP
The term “fly” is used to describe the flap covering the buttons or zipper in the front of a pair of pants. Before “fly” was used for pants, it was the name given to a tent flap.

25. Accomodations along the Black Sea : DACHA
Dachas are usually second homes in Russia and the former Soviet Union that are located outside the city limits in rural areas. Residents/tenants of dachas are often called dachniks.

32. Kiester : ASS
Back in the early 1900s a “keister” was a safe or a strongbox. It has been suggested that this term was then used as slang by pickpockets for the rear trouser pocket in which one might keep a wallet. From this usage, keister appeared as a slang term for the buttocks in the early 1930s.

34. “What’s ___, Doc?” (classic Bugs Bunny short) : OPERA
“What’s Opera, Doc?” is one of my favorite cartoons of all time. It’s all about Elmer Fudd chasing Bugs Bunny to musical extracts from Wagnerian operas. The most famous line from the cartoon if “Kill the Wabbit”, which Elmer sings to the main theme from “Ride of the Valkyries”. “What’s Opera, Doc?” cost Warner Bros. about six times as much as any other cartoon the studio had produced up to that time.

35. ___-faced lie : BALD
Our “bald-faced” lies here in the US are “bare-faced” lies on the other side of the Atlantic. The original expression was indeed “bare-faced”, which portrays the concept of lying with an uncovered face, unashamedly.

44. Computer cursor advancers : TAB KEYS
Like most features on our computer keyboards, the tab key is a hangover from the days of typewriters. When using a typewriter, making entries into a table was very tedious, involving lots of tapping on the spacebar and backspace key. So, a lever was added to typewriters that allowed the operator to “jump” across the page to positions that could be set by hand. Later this was simplified to a tab key which could be depressed, causing the carriage to jump to the next tab stop in much the same way that the modern tab key works on a computer.

46. Claude who painted “Water Lillies” : MONET
“Water Lilies” by French Impressionist Claude Monet is actually a whole series of paintings, numbering about 250 in total. The subjects of the works were the water lilies in Monet’s flower garden at Giverny in northern France.

48. Coloseums : STADIA
The Greek word “stadion” was a measure of length, about 600 feet. The name “stadion” then came to be used for a running track of that length. That “running track” meaning became our contemporary word “stadium”.

51. Words to a slowpoke : MOVE IT!
Back in the early 1800s, a “poke” was a device attached to domestic animals such as pugs or sheep to keep them from escaping their enclosures. The poke was like a yoke with a pole, and slowed the animal down, hence the term “slowpoke”.

52. “___ Nacht” (German carol) : STILLE
The beautiful Christmas Carol “Silent Night” was first performed in Austria in 1818, with words by a priest, Father Joseph Mohr, and melody by an Austrian headmaster, Franz Xaver Gruber. The carol was in German and called “Stille Nacht”. The English translation that we use today was provided to us by an American bishop in 1859, John Freeman Young from Florida.

61. Foriegn traveler’s need : VISA
A visa is a usually a stamp in one’s passport, an indication that one is authorized to enter a particular country. The word “visa” comes into English, via French, from the Latin expression “charta visa” meaning “paper that has been seen”, or “verified paper”.

65. Japanese tech giant : NEC
NEC is the name that the Nippon Electric Company chose for itself outside of Japan after a rebranding exercise in 1983.