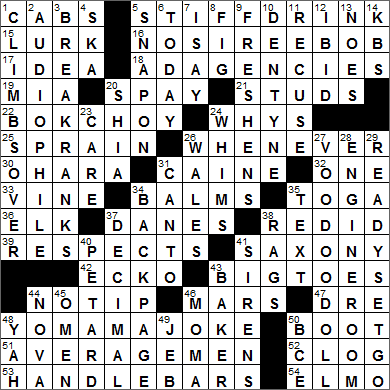 Today’s Wiki-est, Amazonian Googlies
Across
1. Napa options, informally : CABS
The Cabernet Sauvignon grape has been around since the 17th century, and is the result of a chance crossing in southwestern France of the Cabernet franc and Sauvignon blanc grapes.

15. Browse without comment : LURK
A “lurker” is someone who visits websites, especially a discussion forum, and who just reads but does not make a contribution or leave a comment. In other words, someone who just lurks in the background. I know you’re out there … 🙂

17. “Paris is always a good ___” (line from the film “Sabrina”) : IDEA
“Sabrina” is a fabulous romantic comedy directed by Billy Wilder from 1954. A real favorite of mine, it stars Audrey Hepburn in the title role, opposite Humphrey Bogart in an unusual role for him. William Holden plays the inevitable second love interest. There’s a nice scene in the movie where Hepburn performs a lovely rendition of “La Vie en rose”. “Sabrina was remade in 1995 in a version that’s almost as good as the original, starring Julia Ormond, Harrison Ford and Greg Kinnear.

20. Fix, as a toy : SPAY
Our verb “to spay”, meaning “to surgically remove the ovaries of” (an animal) comes from an old Anglo-French word “espeier” meaning “to cut with a sword”.

30. John who wrote “BUtterfield 8” : O’HARA
“BUtterfield 8” (note the capitalization of both the “B” and the “U”) is a film released in 1960 starring Elizabeth Taylor and Laurence Harvey. The title of the movie, and of the John O’Hara novel on which the film is based, is actually a telephone number. Up to the mid-sixties, telephone exchanges were given names rather than numbers. BUtterfield 8 was an exchange in the wealthy Upper East Side of Manhattan, and dialling of BU-8 was equivalent to 28-8, the first three digits of a 7-digit phone number.

31. Michael who played Alfred Pennyworth in three Batman movies : CAINE
There have been only two actors who have been nominated for an Academy Award in every decade from the 1960s to the 2000s. One is Jack Nicholson, and the other is Michael Caine. Caine is now known as Sir Michael Caine, as he was knighted by Queen Elizabeth II in the year 2000.

33. 2012 Twitter acquisition : VINE
Vine is a video sharing service. Videos are limited to six-seconds in length, although each clip loops. Twitter acquired Vine in 2012, just before the service went live.

35. Stola : woman :: ___ : man : TOGA
In Ancient Rome the classical attire known as a toga (plural “togae”) was usually worn over a tunic. The tunic was made from linen, and the toga itself was a piece of cloth about twenty feet long made from wool. The toga could only be worn by men, and only if those men were Roman citizens. The female equivalent of the toga was called a “stola”.

The Hartford investment and insurance company was founded in Hartford, Connecticut in 1810. The company was started by a group of local merchants as a Fire Insurance Company with an initial cash injection of $15,000. The Hartford had an annual revenue of over $26 billion in 2012.

37. Greenlanders, by citizenship : DANES
Greenland is the largest island in the world. Geographically, Greenland is part of the continent of North America, but culturally and politically is considered part of Europe. The island became a Danish colony in 1815, and joined the European Economic Community (EEC) with Denmark. Greenland withdrew from the EEC after a referendum in 1983. Since 2009, Greenland has been relatively autonomous, with the Danish government retaining control of foreign affairs, defence and the judicial system.

41. Dresden’s state : SAXONY
Saxony is the most westerly of Germany’s sixteen states. The state’s largest city is Leipzig, and its capital is Dresden.

42. Fashion designer Marc : ECKO
Marc Ecko is a fashion designer from New Jersey. Marc was born Marc Milecofsky. In college he became a fan of graffiti and used the name “Ecko” to tag his drawings.

46. Curiosity’s locale : MARS
NASA’s Curiosity rover is the fourth in a series of unmanned surface rovers that NASA has sent to Mars. Previous rovers are the Sojourner rover (1997), Spirit rover (2004-2010) and Opportunity rover (2004-present). Curiosity rover was launched in November of 2011, and landed on Mars in August 2012 after having travelled 350 million miles. After that long journey, Curiosity landed just 1½ miles from its targeted touchdown spot.

47. Onetime Ice Cube collaborator, informally : DRE
N.W.A was a hip hop group from Compton, California. The original five group members included rappers who have made a name for themselves as solo acts, including: Dr. Dre and Ice Cube. The story of NWA is told in a 2015 film, also called “Straight Outta Compton”. I hear that the movie is being well received, although I probably won’t be seeing it …

52. Target for a snake : CLOG
A plumber’s snake might be used to clear a clog.

54. Adventurer in Grouchland in a 1999 film : ELMO
The man behind/under the character Elmo on “Sesame Street” is Kevin Clash. If you want to learn more about Elmo and Clash, you can watch the 2011 documentary “Being Elmo: A Puppeteer’s Journey”.

Down
4. Genre for the band Sublime : SKA
Ska originated in Jamaica in the late fifties and was the precursor to reggae music. No one has a really definitive etymology of the term “ska”, but it is likely to be imitative of some sound.

9. Tops off : FRESHENS
To freshen a drink is to top it off.

10. Orbit alternative : DENTYNE
Dentyne chewing gum was formulated back in 1899 by a druggist in New York called Franklin Canning. He came up with the name of his new gum by combining the words “dental” and “hygiene”.

Orbit is a sugarless gum made by Wrigley’s. Orbit was first introduced during WWII, but was taken off the shelves in the 1980s when there was a concern that the gum’s sweetener was carcinogenic. Orbit was relaunched in 2001.

12. [See above] : IBID
Ibid. is short for the Latin word “ibidem” and is typically found in footnotes and bibliographies. Ibid. is used to refer the reader to the prior citation, instead of giving the same information all over again (title, author etc.).

27. One stuck abroad? : VOODOO DOLL
Voodoo is a religion that originated the French slave colony of Saint-Domingue on the Caribbean island of Hispaniola.

28. Scotty’s domain on “Star Trek” : ENGINE ROOM
In the “Star Trek” series on television and in the movies, the colorful character of “Scotty” was played by the Canadian actor James Doohan. Doohan joined the Royal Canadian Artillery at the start of WWII, and participated in the D-Day Invasion of Normandy. After surviving the landing, that same day Doohan was shot by one of his own men in a tragic mishap. Doohan was hit six times, with a bullet to his chest stopped by a silver cigarette case he was carrying. One of Doohan’s fingers was shot off in the incident, an injury that he successfully concealed during his acting career.

31. Part of Dante’s “Inferno” : CANTO
A canto is a section of a long poem, and is a term first used by the Italian poet Dante. “Canto” is the Italian for “song”.

34. It’s usually devoted to sports in a tabloid newspaper : BACK PAGE
“Tabloid” is the trademarked name (owned by Burroughs, Wellcome and Co,) for a “small tablet of medicine”, a name that goes back to 1884. The word “tabloid” had entered into general use to mean a compressed form of anything, and by the early 1900s was used in “tabloid journalism”, applied to newspapers that had short, condensed articles and stories printed on smaller sheets of paper.

40. Small bomb used for breaking down gates : PETARD
In days of old, a petard was a small bomb that was used to breach fortified gates and walls. The phrase “hoisted by his own petard” comes from Shakespeare’s “Hamlet”, and is a reference to a petard detonating prematurely and blowing up (“hoisting”) the bomber.

41. Mythical nautical dangers : SIRENS
In Greek mythology, the Sirens were seductive bird-women who lured men to their deaths with their song. When Odysseus sailed closed to the island home of the Sirens he wanted to hear their voices, but in safety. He had his men plug their ears with beeswax and then ordered them to tie him to the mast and not to free him until they were safe. On hearing their song Odysseus begged to be let loose, but the sailors just tightened his bonds and and the whole crew sailed away unharmed.

44. Massive explosion : NOVA
A nova is basically a star that suddenly gets much brighter, gradually returning to its original state weeks or even years later. The increased brightness of a nova is due to increased nuclear activity causing the star to pick up extra hydrogen from a neighboring celestial body. A supernova is very different from a nova. A supernova is a very bright burst of light and energy created when most of the material in a star explodes. The bright burst of a supernova is very short-lived compared to the sustained brightness of a nova.

46. Home of “Christina’s World,” familiarly : MOMA
The founding of the Museum of Modern Art (MoMA) in New York City was very much driven by Abby Aldrich Rockefeller, the wife of John D. Rockefeller, son of the oil magnate. Working with two friends, Abby managed to get the museum opened in 1929, just nine days after the Wall Street Crash. The MoMA’s sculpture garden bears the name of Abby Aldrich Rockefeller, and has done so since 1949.

“Christina’s World” is an Andrew Wyeth painting that dates back to 1948. The subject of the work is Christina Olson, a woman who suffered from polio that paralyzed her lower body. In the picture, Wyeth painted Christina crawling across a field towards a house in the distance.

I always thought that Jeb was an American nickname for James or Joseph but I must be wrong, because George and Barbara’s son John Ellis Bush is called “Jeb”. A kind blog reader has suggested the the name “Jeb” may have been chosen as JEB are the initials of John Ellis Bush.

50. Dating inits. : BCE
The designations Anno Domini (AD, “year of Our Lord”) and Before Christ (BC) are found in the Julian and Gregorian calendars. The dividing point between AD and BC is the year of the conception of Jesus, with AD 1 following 1 BC without a year “0” in between. The AD/BC scheme dates back to AD 525, and gained wide acceptance soon after AD 800. Nowadays a modified version has become popular, with CE (Common/Christian Era) used to replace AD, and BCE (Before the Common/Christian Era) used to replace BC.