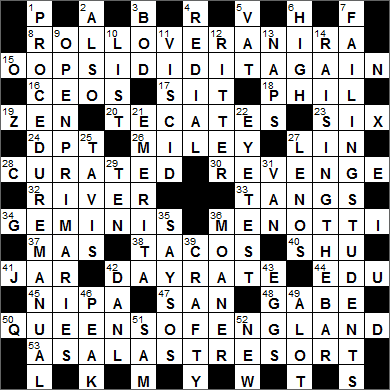 CROSSWORD SETTER: Joe Krozel
THEME: There is a note accompanying each of this week’s crosswords:

We have an additional note with today’s puzzle:

Note: When completed, the outer squares in this puzzle will contain each of the 26 letters of the alphabet exactly once.

Today’s Wiki-est, Amazonian Googlies
Across
8. Do some financial planning for old age : ROLL OVER AN IRA
A rollover IRA is a subtype of a traditional Individual Retirement Account (IRA). The funds for a rollover IRA come from another qualified plan such as a 401(k) or a 403(b) account.

15. 2000 Britney Spears hit : OOPS!… I DID IT AGAIN
Britney Spears was the best-selling female artist in the first decade of the 21st century. And I didn’t buy even one song, and I couldn’t name one right now …

18. One of the Everly Brothers : PHIL
The Everly Brothers are noted for their steel guitar sound, and their great use of harmony. Their harmony onstage wasn’t reflected off the stage though. In 1973 the brothers decided to pursue separate careers and scheduled a farewell performance attended by many fans, family and stalwarts from the music industry. Don Everly came on stage too drunk to perform, and eventually brother Phil just stormed off into the wings, smashing his guitar as he left. The boys didn’t talk to each other for ten years after that incident. Phil Everly passed away in January 2014.

19. Means of enlightenment : ZEN
Zen is a Buddhist school that developed its own tradition in China back in the 7th century AD. Zen is a Japanese spelling of the Chinese word “chan”, which in turn derives from the Sanskrit word “dhyana” meaning “meditation”.

20. Some Mexican beers : TECATES
Tecate is a Mexican beer that takes its name from the city of Tecate in Baja California.

23. Big roll? : SIX
The numbers on dice are arranged so that the opposite faces add up to seven. Given this arrangement, the numbers 1, 2 and 3 all meet at a common vertex. There are two ways of arranging the 1, 2 and 3 around the common vertex, a so called right-handed die (clockwise 1-2-3) or a left-handed die (counterclockwise 1-2-3). Traditionally, dice used in Western cultures are right-handed, whereas Chinese dice are left-handed. Quite interesting …

26. 2000s teen idol, to fans : MILEY
Miley Cyrus became famous playing the Disney Channel character “Hannah Montana”. Miley is the daughter of country singer Billy Ray Cyrus. When she was born, Billy Ray and his wife named their daughter “Destiny Hope”, but soon they themselves calling her “Smiley” as she was always smiling as a baby, and this got shortened to Miley over time. Cute …

28. Like museum exhibits : CURATED
The term “curator” is Latin and applies to a manager, guardian or overseer. In English, the original curators were the guardians and overseers of minors and those with mental disease.

32. Ohio or Illinois, but not Indiana : RIVER
The Ohio river marks the boundaries of five states:

The Illinois River is a tributary of the Mississippi that flows entirely within the state of Illinois.

34. Some June arrivals : GEMINIS
“Gemini” is the Latin word for “twins”.

The composer Gian Carlo Menotti won a Pulitzer Prize in 1950 for his opera “The Consul”. Menotti’s “Amahl and the Night Visitors” has a special place in the repertoire, in that it is the first opera specifically composed for American television. “Amahl and the Night Visitors” was commissioned by NBC and had its debut at the NBC studios in Rockefeller Center on Christmas Eve, 1951. In today’s world of commercially-driven television, I can’t imagine a network commissioning a classical work …

40. Moo ___ pork : SHU
Moo shu pork is a traditional dish from northern China, with the main ingredients being shredded pork and scrambled egg.

44. School extension? : EDU
The .edu domain was one of the six original generic top-level domains specified. The complete original list is:

45. Long-leaved palm : NIPA
The nipa palm is a little unusual in that the trunk of the plant grows underground, with only the leaves and flowers stalks above the surface.

47. Introduction for Pedro or Diego? : SAN
“San Pedro” is Spanish for “Saint Peter”, and “San Diego” can be translated from Spanish as “Saint James” or “Saint Jacob”.

48. One of the officemates on “The Office” : GABE
Gabe Lewis is a character on the US version of the sitcom “The Office”. Played by actor Zach Woods, Gabe first appeared in season six and stuck around until the show’s finale.

50. Anne and Victoria : QUEENS OF ENGLAND
Queen Anne was the last of the Stuarts to rule in the British Isles, and the first sovereign of the Kingdom of Great Britain (after England and Scotland united).

11. Sticky : VISCID
The word “viscid” means “thick and adhesive”. Both “viscid” and “viscous” come from “viscum”, the Latin word for “mistletoe”. The idea is that mistletoe berries were used to make a sticky paste that was smeared on branches to entrap birds.

12. John of old sitcoms : RITTER
The actor John Ritter had acting in his blood, as he was the son of Tex Ritter, the country music singer and movie actor. John Ritter’s big break was playing Jack Tripper on the hit sitcom “Three’s Company”.

21. Many a retired academic : EMERITA
Emeritus (female form “emerita”, plural “emeriti”) is a term in the title of some retired professionals, particularly those from academia. Originally an emeritus was a veteran soldier who had served his time. The term comes from the Latin verb “emerere” meaning to complete one’s service.

22. Series of letters to read? : EYE TEST
The commonly used eye chart (that starts with the letters “E FP TOZ LPED”) is called a Snellen chart. The test is named after its developer Herman Snellen, who introduced it way back in 1862.

25. First name on PBS : TAVIS
Tavis Smiley is the host of his own talk show “Tavis Smiley” on PBS and “The Tavis Smiley Show” on PRI.

27. “Jay ___ Garage” (Emmy-winning auto series) : LENO’S
Jay Leno was born James Leno in New Rochelle, New York. Jay’s father was the son of Italian immigrants, and his mother was from Scotland. Leno grew up in Andover, Massachusetts and actually dropped out of school on the advice of a high school guidance counsellor. However, years later he went to Emerson college and earned a Bachelor’s degree in speech therapy. Leno also started a comedy club at Emerson in 1973. Today Jay Leno is a car nut and owns about 200 vehicles of various types. You can check them out on his website: www.jaylenosgarage.com.

42. Frontiersman Boone, informally : DAN’L
Daniel Boone was a pioneer and folk hero. For frontiersman Boone, the frontier was what we now call the state of Kentucky. He led the building of the Wilderness Road through the famous Cumberland Gap in the Appalachians, a route subsequently taken by hundreds of thousands of migrants into Kentucky. Boone fought in the Revolutionary War with distinction, and after the war returned to Kentucky and got himself into land speculation. He became mired in debt, forcing him to emigrate to Missouri to settle down on land that was at that time owned by the French. It was there that he spent the last decades of his life.

43. Quiche needs : EGGS
The classic dish called quiche is made with eggs (“oeufs” in French). Even though the quiche is inextricably linked to French cuisine, the name “quiche” comes from the German word for cake, “Kuchen”. The variant called “quiche lorraine” includes bits of smoked bacon as an ingredient.

51. “Cheers” role : SAM
On the sitcom “Cheers”, barman Sam Malone was played by Ted Danson. Malone was a retired relief pitcher for the Boston Red Sox, and a recovering alcoholic. Great show …