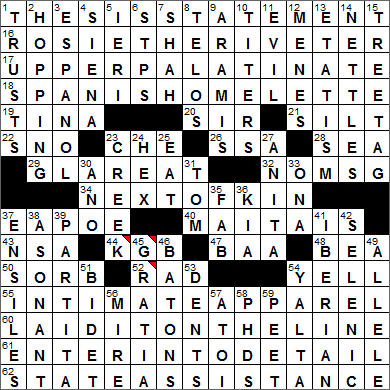 Today’s Wiki-est, Amazonian Googlies
Across
16. One saying “We can do it!” : ROSIE THE RIVETER
Rosie the Riveter is a cultural icon that represented women working in factories across the country during WWII as part of the war effort. The term “Rosie the Riveter” first appeared as the title of a 1942 song that was a national hit.

17. Bavarian region that the Danube passes through : UPPER PALATINATE
The German federal state of Bavaria comprises seven administrative regions, one of which is the Upper Palatinate.

The Danube is the second largest river in Europe (after the Volga), and actually flows through four European capitals (Vienna, Budapest, Belgrade and Bratislava).

18. Brunch treat with egg and potatoes : SPANISH OMELETTE
A Spanish Omelette is a Spanish dish, as the name implies. It is known as a Tortilla Española in Spain, and consists of eggs to which are added potatoes and perhaps onions, after which the mixture is fried in olive oil.

22. Caps preceder : SNO-
Sno-Caps are a brand of candy usually only available in movie theaters. Sno-caps have been around since the 1920s, would you believe?

26. Org. that tracks baby name popularity : SSA
The Social Security Administration (SSA) publishes a list of the 1,000 most common baby names for the prior year annually, just before Mother’s Day. The list is compiled using applications for Social Security cards.

32. Menu promise : NO MSG
Monosodium glutamate (MSG) is the sodium salt of a naturally-occurring,non-essential amino acid called glutamic acid. It is used widely as a flavor enhancer, particularly in many Asian cuisines. Whether or not it is harmful seems to be still under debate. I say that something produced in a test tube shouldn’t be in our food …

40. Things a bartender strains to make : MAI TAIS
The Mai Tai cocktail is strongly associated with the Polynesian islands, but the drink was supposedly invented in 1944 in Trader Vic’s restaurant in Oakland, California. One recipe is 6 parts white rum, 3 parts orange curaçao, 3 parts Orgeat syrup, 1 part rock candy syrup, 2 parts fresh lime juice, all mixed with ice and then a float added of 6 parts dark rum.

43. Hush-hush org. : NSA
The National Security Agency (NSA) was set up in 1952 by President Truman, a replacement for the Armed Forces Security Agency that had existed in the Department of Defense since 1949. The NSA has always been clouded in secrecy and even the 1952 letter from President Truman that established the agency was kept under wraps from the public for over a generation. I really like the organization’s nickname … “No Such Agency”.

44. Hush-hush org. : KGB
The Komitet gosudarstvennoy bezopasnosti (KGB) was the national security agency of the Soviet Union until 1991. The KGB was dissolved after the agency’s chairman led a failed attempt at a coup d’état designed to depose President Mikhail Gorbachev.

55. Teddy, e.g. : INTIMATE APPAREL
The item of lingerie known as a teddy can also be called “camiknickers”. The alternative name was used when the one-piece garment was introduced in the twenties, a combination of a camisole and panties (aka “knickers”).

4. College near Albany, N.Y. : SIENA
Siena College is a Roman Catholic school, a Franciscan liberal arts college founded in 1937 in Loudonville, New York near Albany. The college is named for Saint Bernardino of Siena, a Franciscan friar who lives in the 15th century.

6. Line of additives : STPS
STP is a brand name for automotive lubricants and additives. The name STP comes from “Scientifically Treated Petroleum”.

8. Ultimate object, to Aristotle : TELOS
“Telos” is the Greek word for “purpose, goal”. In the world of philosophy, a telos is an end or a purpose, and is a concept that is central to the philosophical method known as teleology.

9. Popular cologne that shares its name with a literary character : ARAMIS
Alexandre Dumas’ “Three Musketeers” are Athos, Porthos and Aramis, and their young protégé is D’Artagnan. A musketeer was an infantry soldier who was equipped with a musket. Funnily enough, the three “musketeers” really don’t use their muskets, and are better known for their prowess with their swords.

Aramis is a fragrance produced by Estée Lauder.

10. Chemistry concentrations : TITERS
Remember those titrations we did in the chemistry lab at school? They were to measure the concentration of solutions, also known as the solution’s “titer”.

11. “___ is whatever distracts”: Kafka : EVIL
Franz Kafka was born in 1883 in Prague, then part of Bohemia and today the capital of the Czech Republic. Kafka is known as one of the greatest novelists who worked in the German language, and even has an adjective named after him. Something that is “kafkaesque” is senseless, disorienting and may have menacing complexity. As it was for many great artists, Kafka’s fame came after his death when much of his work was published.

12. Founder of Egypt’s first dynasty : MENES
The ancient Egyptian pharaoh named Menes is said to have founded the first dynasty and to have united Upper and Lower Egypt.

24. Malediction : HEX
“Hexen” is a German word meaning “to practice witchcraft”. The use of the word “hex” in English started with the Pennsylvania Dutch in the early 1800s.

“Semester” is a German word from the Latin “semestris”, an adjective meaning “of six months”. We use the term in a system that divides an academic year into two roughly equal parts. A trimester system has three parts, and a quarter system has four.

Tom, Tom, the piper’s son,
Stole a pig, and away did run;

The “pig” mentioned in the rhyme isn’t actually a live animal but is actually a small pastry with an apple filling.

36. Cadenza maker : KIA
The Cadenza is a full-size automobile sold in North America, and made by Kia. The same model is sold as the Kia K7 in South Korea.

37. Stores on a farm : ENSILES
“To ensile” is to store in a silo. “Silo” is a Spanish word that we absorbed into English, originally coming from the Greek word “siros” that described a pit in which one kept corn.

38. Not voiced, as the first “d” in “Wednesday” : ASONANT
In phonetics, a letter or syllable that is “sonant” is voiced, whereas an “assonant” (also “asonant”) letter is not voiced.

41. Like Catalonia : IBERIAN
The Ebro is the longest river in Spain. The river was known by the Romans as the Iber, and it is the “Iber” river that gives the “Iberian” Peninsula its name.

Catalonia is an autonomous community in the very northeast of Spain. The capital of Catalonia is the city of Barcelona. Sandwiched between Catalonia and France to the north, is the lovely Principality of Andorra, nestled in the Pyrenees.

42. Relating to the moon : SELENIC
Selene was the Greek goddess of the moon, the equivalent of the Roman deity, Luna. Selene gave her name to the chemical element “selenium”.

49. Alternative form of a gene : ALLELE
A gene is a section of a chromosome that is responsible for a particular characteristic in an organism. For example, one gene may determine eye color and another balding pattern. We have two copies of each gene, one from each of our parents, with each copy known as an allele.

51. European hotel fixture : BIDET
“Bidet” is a French word that we imported into English. In French, the word “bidet” originally described a small horse or a pony. What we know as a bidet was so called because one can straddle it like a horse in order to use it.

54. Conference site : YALTA
The Yalta Conference was a wartime meeting between WWII leaders Franklin D. Roosevelt, Winston Churchill and Joseph Stalin. Held in February of 1945, the conference is most remembered for decisions made on the post-war organization of Europe. To a large extent, the three leaders made decisions carving up political influence around the world, decisions that have profound implications to this day.

57. What’s yours in Montréal? : A TOI
“À toi” is the French term for “yours”, when talking to someone with whom one is familiar. “À toi” literally means “to you”.

The original name of Montreal was Ville-Marie, meaning the City of Mary. Ville-Marie is now the name of a borough in the city, the borough which includes the downtown area and “Old Montreal”. The present-day city covers most of the Island of Montreal (in French, Île de Montréal) that is located where the Saint Lawrence and Ottawa Rivers meet. The name Montreal comes from the three-headed hill that dominates the island and is called Mount Royal.

58. Condoleezza Rice and Martin Luther King Jr., for two : PHDS
Condoleezza “Condi” Rice was the second African American to serve as US Secretary of State (after Colin Powell) and the second woman to hold the office (after Madeleine Albright). Prior to becoming Secretary of State in President George W. Bush’s administration, Rice was the first woman to hold the office of National Security Advisor. In private life, Rice is a remarkably capable pianist. Given her stature in Washington, Rice has had the opportunity to play piano in public with the likes of cellist Yo-Yo Ma, and soul singer Aretha Franklin.

Martin Luther King, Jr. was only 35 years old when he won the Nobel Peace Prize, making him the youngest person to be so honored. King was given the award for his work to end racial segregation and discrimination using non-violent means. The following year he was awarded the American Liberties Medallion by the American Jewish Community.

59. “2012” actress Amanda : PEET
The actress Amanda Peet studied acting with the celebrated Uta Hagen at Columbia University. Peet has appeared in a number of successful films including “The Whole Nine Yards” and “Syriana”. I remember her best from what I thought was a great TV show (but no one seemed to agree!) called “Studio 60 on the Sunset Strip”.

“2012” is a disaster movie released in 2009 starring John Cusack. The disaster in the storyline is a series of geological and meteorological events that are purportedly related to the “end of the world” that some said was predicted by the Mayan calendar.