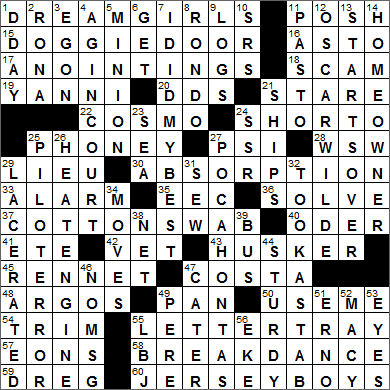 Today’s Wiki-est, Amazonian Googlies
Across
1. Hit 1981 Broadway musical made into a 2006 film : DREAMGIRLS
The Broadway musical “Dreamgirls” follows the lives of a fictional female singing trio named “The Dreams”. The stage musical was adapted for the big screen in 2006 film of the same name starring Jennifer Hudson, Beyoncé Knowles and Anika Noni Rose as the trio.

11. Like five-star accommodations : POSH
No one really knows the etymology of the word “posh”. The popular myth that POSH stands for “Port Out, Starboard Home” is completely untrue, and is a story that can actually be traced back to the 1968 movie “Chitty Chitty Bang Bang”. The myth is that wealthy British passengers travelling to and from India would book cabins on the port side for the outward journey and the starboard side for the home journey. This trick was supposedly designed to keep their cabins out of the direct sunlight.

18. Deal with a huge catch : SCAM
The slang term “scam”, meaning a swindle, may come from the British slang “scamp”.

19. One-named New Ager : YANNI
Yanni is a remarkable Greek musician, very successful in the world of New Age music. What I find so remarkable is that he is a self-taught musician.

20. One who might say “Brace yourself!,” in brief? : DDS
Doctor of Dental Surgery (DDS)

Brace yourself, put on your braces.

22. Mag crowning a “Bachelor of the Year” : COSMO
“Cosmopolitan” magazine was first published way back in 1886! It started out life as a family magazine, then as a literary publication. “Cosmo” took its present form as a women’s magazine in the sixties.

27. What Indiana University’s superimposed “I” and “U” looks like : PSI
The Greek letter psi is the one that looks a bit like a trident or a pitchfork. It is the 23rd letter of the 24 letters in the Greek alphabet.

30. Bounty work? : ABSORPTION
Bounty is a brand of paper towel made by Procter & Gamble.

35. Treaty of Rome creation, for short : EEC
The Treaty of Rome is the international agreement of 1957 that established the European Economic Community (EEC). The original signatory countries were Belgium, France, Italy, Luxembourg, the Netherlands and West Germany. The EEC was also called “the Common Market”. It was a NAFTA-like structure that was eventually absorbed into today’s European Union.

36. Find x, say : SOLVE
Algebra is a branch of mathematics in which arithmetical operations are performed on variables rather than specific numbers (x,y etc). The term “algebra” comes from the Arabic “al jebr” meaning “reunion of broken parts”.

40. It forms part of the Polish/German border : ODER
The Oder river rises in the Czech Republic, and forms just over a hundred miles of the border between Germany and Poland. Downstream, the Oder breaks into three branches that empty into the Gulf of Pomerania in the Baltic Sea.

42. Professional fixer : VET
“Vet” is an abbreviation for “veterinarian”, a professional who treat animals for disease and injury. The word “veterinary” comes from the Latin “veterinae” meaning “working animals, beasts of burden”.

43. Hawkeye rival, briefly : HUSKER
The state of Nebraska got its “Cornhusker State” nickname from the University of Nebraska athletic teams (and not the other way round). In turn, the university teams’ name comes from the prevalence of corn as a crop, and the harvesting process known as “cornhusking”, removal of the outer husk from the ear of corn.

45. Cheesemaking need : RENNET
Rennet is an enzyme complex that is produced in the stomach of mammals. Rennet is used by children to digest a mother’s milk. It is also used to coagulate milk in cheese production.

47. ___ Brava, Spain : COSTA
The Costa Brava is a section of coast in northeastern Catalonia, Spain stretching from north of Barcelona to the border with France. “Costa Brava” means “rugged coast” and was a term first coined in a local newspaper article in 1908.

48. Old Peloponnesian power : ARGOS
Argos is one of the oldest cities in Greece, and indeed in Europe, having been continuously inhabited for over 7,000 years. In ancient times, Argos was a rival city-state to the powerful Sparta.

49. Label a bomb : PAN
To pan something is to criticize it harshly.

57. Geological units : EONS
Geological time is divided into a number of units of varying lengths. These are, starting from the largest:

59. Bit at the bottom : DREG
The dregs in wine, the sediment that settles during fermentation (and sometimes in the bottle), is also called “lees”.

60. Hit 2005 Broadway musical made into a 2014 film : JERSEY BOYS
“Jersey Boys” is a very entertaining musical that chronicles the life of the sixties group the Four Seasons. Joe Pesci is one of the characters in the story, which isn’t really surprising. Pesci is one of the show’s producers.

Down
1. Time to strike : D-DAY
The most famous D-Day in history was June 6, 1944, the date of the Normandy landings in WWII. The term “D-Day” is used by the military to designate the day on which a combat operations are to be launched, especially when the actual date has yet to be determined. What D stands for seems to have been lost in the mists of time although the tradition is that D just stands for “Day”. In fact, the French have a similar term, “Jour J” (Day J), with a similar meaning. We also use H-Hour to denote the hour the attack is to commence.

2. First name in gossip : RONA
Rona Barrett is a gossip columnist originally from New York City but who plies her trade in Southern California. Barrett started out as with a gossip column that was syndicated in newspapers but then made a successful transition to television. She made regular appearances in news broadcasts and on her entertainment shows in the sixties and seventies.

3. ___ Krenz, last Communist leader of East Germany : EGON
Egon Krenz is a retired politician and the last communist leader of former East Germany. He was forced to resign when the Berlin Wall fell in 1989. Krenz was convicted for his role in crimes committed by the East German government, specifically the manslaughter of four Germans attempting to escape over the Berlin Wall. He served nearly four years of a 6½ -year sentence.

4. “Henry V” battle setting : AGINCOURT
The Battle of Agincourt took place in 1415 during the Hundred Years’ War between the English and French. The English forces emerged victorious under the leadership of King Henry V, despite being greatly outnumbered on the field. Azincourt, as it is known in French, is a commune in the very north of France.

8. Common concerto closer : RONDO
A rondo was often chosen by composers in the classical period for the last movement of a sonata (or symphony or concerto, for that matter). In rondo form there is a principal theme that alternates with a contrasting theme(s). So, the original theme anchors the whole piece in between secondary digressions.

12. Who wrote “There is no sin except stupidity” : OSCAR WILDE
If you didn’t know Oscar Wilde was Irish, you will when you see the name he was given at birth: Oscar Fingal O’Flahertie Wills Wilde!

27. Noted kidnappee of 1613 : POCAHONTAS
Pocahontas was a Native American from Virginia, the daughter of Chief Powhatan. She was captured by the English colonists and held for ransom. While prisoner, Pocahontas converted to Christianity and opted to remain with the English when faced with her freedom. A year later, she married tobacco planter John Rolfe. For a few months before her death, Pocahontas lived with Rolfe in England. The couple had actually boarded a ship to return them to Virginia when Pocahontas became ill and had to be brought ashore on the south coast of England, where she soon passed away.

34. Romeo’s repertoire : MOVES
A “romeo” is a player, someone with moves and an eye for the ladies.

38. What a birdie flies over : NET
“Birdie” is another name for a shuttlecock, the projectile used in the sport of badminton.

39. Take all the dishes from : BUS
A busboy is a person who assists a waiter, mainly by clearing tables. The verb “to bus” arose in the early 1900s and is probably a reference to the wheeled cart that was used to carry dishes.

46. Request to leave out for takeout? : NO MSG
Monosodium glutamate (MSG) is the sodium salt of a naturally-occurring,non-essential amino acid called glutamic acid. It is used widely as a flavor enhancer, particularly in many Asian cuisines. Whether or not it is harmful seems to be still under debate. I say that something produced in a test tube shouldn’t be in our food …

49. Father of the mariée : PERE
In French, the “père” of the “mariée” might pay for the wedding.

51. Cosmetician Laszlo : ERNO
Ernő László was a dermatologist from Hungary who became sought out by celebrities for treatment of both serious and cosmetic skin issues. He founded the Ernő László Institute in New York in 1939, which soon had an impressive list of clients that included the Duchess of Windsor, Greta Garbo, Grace Kelly, Ava Gardner, Katharine Hepburn, Audrey Hepburn, Marilyn Monroe and Jacqueline Kennedy Onassis.

52. Gray of R&B : MACY
Macy Gray is an R&B singer noted for her raspy voice, and a singing style that resembles that of Billie Holliday.

56. Scratch : EKE
To “eke out” means to “make something go further or last longer”. For example, you could eke out your income by cutting back on expenses.