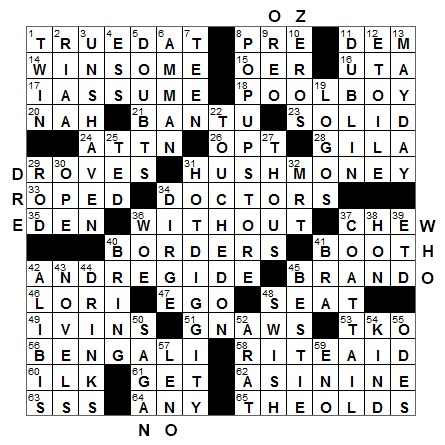 CROSSWORD SETTER: Andrew J. Ries
THEME: Doctors Without Borders … some of today’s answers extend beyond the edges of the grid. Also, the letters outside the grid spell out the names of four doctors. These four are DOCTORS WITHOUT (outside) BORDERS (the edges of the grid).

The answers extending beyond the grid are:

The DOCTORS WITHOUT BORDERS are:

Dr. Oz
Mehmet Oz is a cardiothoracic surgeon, and a TV personality known simply as “Dr. Oz”. Oz appeared as a health expert for several seasons on “The Oprah Winfrey Show”. Now he has his own “The Dr. Oz Show” on radio and television that is backed by Winfrey’s Harpo Productions.

Dr. No
“Dr. No” may have been the first film in the wildly successful James Bond franchise, but it was the sixth novel in the series of books penned by Ian Fleming. Fleming was inspired to write the story after reading the Fu Manchu tales by Sax Rohmer. If you’ve read the Rohmer books or seen the films, you’ll recognize the similarities between the characters Dr. No and Fu Manchu.

Dr. Dre
Dr. Dre is the stage name of rapper Andre Romelle Young. Dr. Dre is known for his own singing career as well as for producing records and starting the careers of others such Snoop Dogg, Eminem and 50 Cent.

Doctor Who
The iconic science-fiction television show “Doctor Who” was first aired in 1963, and relaunched in 2005 by the BBC. The relaunched series is produced in-house by the BBC in Cardiff in Wales, the location that is the setting of the successful “Doctor Who” spin-off called “Torchwood”. The new show is about the Cardiff branch of the Torchwood Institute which investigates incidents involving extraterrestrials.

Today’s Wiki-est, Amazonian Googlies
Across
1. “Yep, you’re right” : TRUE DAT
“True dat” is a slang term, an affirmation. It is an alternative pronunciation of “true that”.

11. Boxer, e.g., for short : DEM
Barbara Boxer has been a Democratic US Senator representing California since 1993. When elected in 1992, she broke the record for the most popular votes in a US Senate election, receiving almost 7 million votes.

16. Stage legend Hagen : UTA
Uta Hagen was a German-born American actress. Hagen married Jose Ferrer in 1938, but they were divorced ten years later after it was revealed that she was having a long-running affair with Paul Robeson. Her association with Robeson, a prominent civil rights activist, earned her a spot on the Hollywood Blacklist during the McCarthy Era. This forced her away from film, but towards a successful stage career in New York City.

21. Zulu, e.g. : BANTU
There are hundreds of Bantu languages, mainly spoken in central, east and southern Africa. The most commonly spoken Bantu language is Swahili, with Zulu coming in second.

28. Colorado tributary : GILA
The Gila River is a tributary of the Colorado and flows through New Mexico and Arizona. From 1848 to 1853, the Gila marked part of the border between the US and Mexico.

31. Sum for keeping mum : HUSH MONEY
The phrase “mum’s the word” has been around since the early 1700s. “Mum” has been used to mean “silent” for centuries, the idea being that “mum” is the sound made when the lips are tightly sealed.

35. Site for a famed garden : EDEN
According to the Book of Genesis, Adam and Eve lived in a garden “in” Eden, with Eden being geographically located by reference to four rivers including the Tigris and the Euphrates. Some scholars hypothesize that Eden was located in Mesopotamia, which encompasses much of modern-day Iraq.

42. Literature Nobelist between Hermann Hesse and T. S. Eliot : ANDRE GIDE
André Gide was an author from Paris who won the Nobel Prize for Literature in 1947. His works were placed on the Index of Forbidden Books by the Catholic Church in 1952.

45. 1950s sex symbol : BRANDO
Marlon Brando won the Oscar for Best Actor for his portrayal of Vito Corleone in the 1972 blockbuster “The Godfather”. He turned down the award and didn’t attend the ceremony. Instead he sent a Native American rights activist called Sacheen Littlefeather who made a speech protesting the depiction of Native Americans in Hollywood movies. Brando wasn’t the first person to refuse an Oscar. George C. Scott did the same thing when he won for playing the title role in 1970’s “Patton”. Scott just didn’t like the whole idea of “competing” with other actors.

46. Actress Singer : LORI
Lori Singer is an actress, and also a cellist. Singer’s most famous acting role was the daughter of the Reverend Shaw Moore (played by John Lithgow) in “Footloose”.

48. Banana ___ : SEAT
A banana seat is a long saddle on bicycle, often seen on what are called wheelie bikes.

53. Boxer’s achievement, for short : TKO
In boxing, a knockout (KO) is when one of the fighters can’t get up from the canvas within a specified time, usually 10 seconds. This can be due to fatigue, injury, or the participant may be truly “knocked out”. A referee, fighter or doctor may also decide to stop a fight without a physical knockout, especially if there is concern about a fighter’s safety. In this case the bout is said to end with a technical knockout (TKO).

56. India’s national anthem was originally written in it : BENGALI
The national anthem of India is titled “Jana Gana Mana”, and is known in English as “Thou Art the Ruler of the Minds of All People”.

58. Walgreens competitor : RITE AID
What we know today as Rite Aid started out as one store in Scranton, Pennsylvania in 1962. Rite Aid is now the biggest chain of drugstores on the East Coast of the United States and has operations all over the country.

62. Totally far-fetched : ASININE
The adjective “asinine” means “stupid, obstinate”, and comes from the Latin for “like an ass”.

63. Draft letters : SSS
The US government maintains information on all males who are potentially subject to military conscription, using what is called the Selective Service System (SSS). In the event that a draft is held, men registered would be classified into groups to determine eligibility for service. Class 1-A registrants are those available for unrestricted military service. Other classes are 1-A-O (conscientious objectors available for noncombatant service), 4-A (registrants who have completed military service) and 4-D (ministers of religion).

Down
1. King’s little cousin : TWIN
Those would be king and twin mattress sizes.

6. Abdullah I made it a capital city : AMMAN
Amman is the capital city of Jordan, and is one of the oldest continuously-inhabited cities in the world. Amman has been occupied by a number of different civilizations over the centuries, including the Greeks who called it Philadelphia, a name retained by the Romans when they occupied the city just after 100 AD.

Abdullah I ruled the Emirate of Transjordan from 1921 to 1946, and the successor state of Jordan from 1946 until his assassination in 1951.

8. Short-term retail location, nowadays : POP-UP STORE
“Pop-up stores” are temporary retail locations that can be open for business for perhaps a day, or several weeks. A good example is a store that opens just for Halloween or perhaps Christmas.

9. Chocolaty goodie : OREO
The Oreo was the best-selling cookie in the 20th century, and almost 500 billion of them have been sold since they were introduced in 1912 by Nabisco. In those early days the creme filling was made with pork fat, but today vegetable oils are used instead. If you take a bite out of an Oreo sold outside of America you might notice a difference from the homegrown cookie, as coconut oil is added in the overseas version to give a different taste.

13. Cry for help, or a time for celebration : MAYDAY, or MAY DAY
The term “Mayday” is an emergency codeword that is used internationally as a distress signal, especially when making a radio transmission. “Mayday” comes from the French phrase “venez m’aider” meaning “come to help me”. When used properly, the term is repeated three times in a row: “Mayday Mayday Mayday”.

May Day is a spring holiday celebrated on May 1st by many cultures around the world.

19. Apple’s apple and others : LOGOS
The logo of Apple, the computer company, is a silhouette of an apple with a bite taken out of it. The company’s original logo featured a picture of Sir Isaac Newton sitting under an apple tree.

25. Former Alaska politico Stevens : TED
Ted Stevens was a US Senator from Alaska. He first became a senator on Christmas Eve in 1968, and served continuously in that office until he was killed in a plane crash in 2009. Stevens was the longest-serving Republican US Senator in history.

32. Star of the short-lived reality show “I Pity the Fool” : MR T
Mr. T’s real name is Laurence Tero Tureaud. Mr. T is famous for many things, including the wearing of excessive amounts of jewelry. He started this habit when he was working as a bouncer, wearing jewelry items that had been left behind by customers at a nightclub so that the items might be recognized and claimed. It was also as a bouncer that he adopted the name Mr. T. His catch phrase comes from the movie “Rocky III”. In the film, before he goes up against Rocky Balboa, Mr. T says, “No, I don’t hate Balboa, but I pity the fool”. He parlayed that line into quite a bit of success. He had a reality TV show called “I Pity the Fool”, and produced a motivational video called “Be Somebody … or Be Somebody’s Fool!”.

34. Strains with sadness : DIRGE
A “dirge” is a slow and mournful musical piece, like a funeral hymn.

43. Much of a literature class’s studies : NOVELS
Our word “novel”, used for a lengthy work of fiction, comes from the Latin “novella” meaning “new things”.

48. Result of a perfect shot : SWISH
A swish shot is a basketball shot that goes through the hoop without touching the rim or the backboard, and you can hear that “swish” as it just passes through the net, so they tell me …

50. TV host who inspired Neil deGrasse Tyson : SAGAN
Carl Sagan was a brilliant astrophysicist and a great communicator. Sagan was famous for presenting obscure concepts about the cosmos in such a way that we mere mortals could appreciate. He also wrote the novel “Contact” which was adapted into a fascinating 1997 film of the same name starring Jodie Foster.

52. “How now!” follower in “Hamlet” : A RAT?
In Shakespeare’s “Hamlet”, the title character utters the line “How now, a rat? Dead for a ducat, dead!”. Then Hamlet thrusts his sword through a tapestry covering an alcove and kills Polonius, who was lurking there.

55. Wordsmiths’ paeans : ODES
A paean is a poem or song that expresses triumph or thanksgiving. “Paean” comes from the ancient Greek “paian” meaning “song of triumph”.

57. Longtime leader in late-night : LENO
Jay Leno was born James Leno in New Rochelle, New York. Jay’s father was the son of Italian immigrants, and his mother was from Scotland. Leno grew up in Andover, Massachusetts and actually dropped out of school on the advice of a high school guidance counsellor. However, years later he went to Emerson college and earned a Bachelor’s degree in speech therapy. Leno also started a comedy club at Emerson in 1973. Today Jay Leno is a car nut and owns about 200 vehicles of various types. You can check them out on his website: www.jaylenosgarage.com.

59. Musician Brian : ENO
Brian Eno is a musician, composer and record producer from England who first achieved fame as the synthesiser player with Roxy Music. As a producer, Eno has worked with David Bowie, Devo and U2.