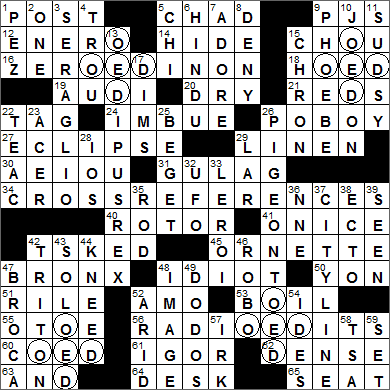 Today’s Wiki-est, Amazonian Googlies
Across
5. Something left hanging in an election? : CHAD
We are all familiar with “hanging chads” after the famous Florida election recounts of 2000. A chad is any piece of paper punched out from a larger sheet. So, those round bits of paper we’ve all dropped over the floor when emptying a hole punch, they’re chads.

9. Lounger’s wear, for short : PJS
Our word “pajamas” (“PJs” for short) comes to us from the Indian subcontinent, where “pai jamahs” were loose fitting pants tied at the waist and worn at night by locals and ultimately by the Europeans living there. And “pajamas” is another of those words that I had to learn to spell differently when I came to America. In the British Isles the spelling is “pyjamas”.

Buenos Aires is the capital of Argentina, located on the estuary of the Ria de la Plata. As a port city, the people of Buenos Aires are known as porteños (“people of the port”).

15. China’s ___ En-lai : CHOU
Zhou Enlai (also Chou En-Lai) was the first government leader of the People’s Republic of China and held the office of Premier from 1949 until he died in 1976. Zhou Enlai ran the government for Communist Party Leader Mao Zedong, often striking a more conciliatory tone with the West than that of his boss. He was instrumental, for example, in setting up President Nixon’s famous visit to China in 1972. Zhou Enlai died just a few months before Mao Zedong, with both deaths leading to unrest and a dramatic change in political direction for the country.

19. Automaker whose name means “listen” in Latin : AUDI
The Audi name has an interesting history. The Horch company was founded by August Horch in 1909. Early in the life of the new company, Horch was forced out of his own business. He set up a new enterprise and continued to use his own name as a brand. The old company sued him for using the Horch name so a meeting was held to choose something new. Horch’s young son was studying Latin in the room where the meeting was taking place. He pointed out that “Horch” was German for “hear” and he suggested “Audi” as a replacement, the Latin for “listen”.

24. Permeate, as with dye : IMBUE
“To imbue” is to pervade, to soak in. “Imbue” has the same etymological roots as our word “imbibe”.

26. New Orleans sandwich : PO’ BOY
A po’ boy is a submarine sandwich from Louisiana. There are a lot of theories about where the name came from, and none sound too convincing to me. A po’ boy differs from a regular submarine sandwich in that it uses Louisiana French bread, which is soft in the middle and crusty on the outside.

29. Hope chest filler : LINEN
A “hope chest” is (or perhaps “was”) used by young unmarried women to collect items for their new household in anticipation of marriage. The term used for the same thing in the UK is “bottom drawer” and in Australia is “glory box”.

31. Stalin-era labor camp : GULAG
The Gulag was a government agency in the Soviet Union that administered forced labor camps. The term “gulag” was used for the camps themselves, especially when used for political dissidents. “GULag” is actually an acronym standing for the Russian “Chief Administration of Corrective Labor Camps and Colonies”.

40. Whirlybird feature : ROTOR
“Whirlybird” is an informal name for a helicopter.

47. Name that Ogden Nash once rhymed with “No thonx” : BRONX
Ogden Nash wrote the couplet:

48. Dummkopf : IDIOT
“Dummkopf” is a German word that translates literally as “dumb head”.

55. Great Plains tribe : OTOE
The Otoe (also Oto) Native American tribe originated in the Great Lakes region as part of the Winnebago or Siouan tribes. The group that would become the Otoe broke away from the Winnebago and migrated southwestwards ending up in the Great Plains. In the plains the Otoe adopted a semi-nomadic lifestyle dependent on the horse, with the American bison becoming central to their diet.

60. Like Colgate University, since 1970 : CO-ED
The Colgate company, of toothpaste fame, was started by Englishman William Colgate in 1806 as a soap and candle factory in New York City. As the Colgate family prospered, they spent decades providing financial support to Madison University in Hamilton, New York. In recognition of this support, the school was renamed in 1890 to Colgate University.

61. Sikorsky of aviation : IGOR
Igor Sikorsky was a Russian pioneer in the world of aviation. He designed and indeed piloted the world’s first multi-engine, fixed-wing aircraft in 1913. He moved to the US in 1919 and set up his own aircraft manufacturing business. In the thirties he made the magnificent flying boats that were used by Pan Am in their Clipper era. Sikorsky also developed the world’s first mass-produced helicopter, in 1942.

Down
1. Dispenser candy : PEZ
PEZ is an Austrian brand name for a particular candy sold in a mechanical dispenser. Famously, PEZ dispensers have molded “heads”, and have become very collectible over the years. The list of heads includes historical figures like Betsy Ross and Paul Revere, characters from “Star Wars” and “Star Trek”, and even British royalty like the Duke and Duchess of Cambridge (“William and Kate”). The name PEZ comes from the first, middle and last letters of “Pfefferminz”, the German word for “peppermint”.

3. Sultan’s palace : SERAGLIO
“Seraglio” was the name given to the living quarters use by wives and concubines in some Ottoman households. The same quarters might also be referred to as a “harem”.

The term “pants”, meaning trousers, is an abbreviated form of “pantaloons” that first appeared in the 1840s. Pantaloons were a kind of tights named for a silly old male character in Italian comedy called “Pantaloun” who always wore tight trousers over skinny legs.

5. Life force, in Taoism : CHI
In Chinese culture “qi” or “chi” is the life force in any living thing.

The Chinese character “tao” translates as “path”, but the concept of Tao signifies the true nature of the world.

6. Worshiper of Brahma : HINDU
The Hindu Trinity is composed of Brahma the creator, Vishnu the maintainer or preserver, and Shiva (also Siva) the destroyer or transformer.

10. “Walking Tall” actor ___ Baker : JOE DON
The actor Joe Don Baker appeared in three “James Bond” movies, on the side of both the goodies and the baddies. Baker played villain Brad Whitaker in “The Living Daylights”, and CIA Agent Jack Wade in “GoldenEye” and “Tomorrow Never Dies”.

13. Sophocles tragedy : OEDIPUS REX
“Oedipus Rex” (also “Oedipus the King”) is a tragedy penned by the Ancient Greek playwright Sophocles. The play tells the story of Oedipus, a man who becomes King of Thebes. Famously, Oedipus was destined from birth to murder his father and marry his mother.

23. Taiwanese PC maker : ACER
I owned several Acer laptops, which were for my money the most reliable machine at the best price. Acer is a Taiwanese company that I used to visit a lot when I was in the electronics business. I was very impressed back then with the company’s dedication to quality, but have heard that things have gone so well in recent years …

29. ___ gibbon (zoo primate) : LAR
The lar gibbon is a relatively common gibbon species, found from southwest China to the Malay Peninsula. Despite their relative prevalence, lar gibbons are threatened by the continuing loss of their habitat.

38. Prefix with -plasm : ECTO-
In the real world, ectoplasm is part of the cytoplasm of a cell. In the paranormal world, ectoplasm is that spiritual energy that some people claim to be able to see, that emanates from ghostly characters. It’s that ethereal shape that is sometimes seen in photographic images, which can be interpreted as the energy of some spirit from “the other side”. Spooky stuff …

42. Moon of Neptune : TRITON
Triton is the largest moon of Neptune, and is named after the Greek sea god (Neptune is the Roman sea god). Triton is unique in our solar system in that it has a “retrograde orbit”, meaning that it orbits Neptune in the opposite direction to the planet’s rotation.

47. Sagan wrote about his brain : BROCA
“Broca’s Brain” is a 1979 book written by Carl Sagan. The title is a reference to French physician Paula Broca who first discovered that different functions are controlled by different parts of the brain.

49. Dummkopfs : DODOS
“Dummkopf” is a German word that translates literally as “dumb head”.

54. Fateful day in the Senate : IDES
Julius Caesar was assassinated on the 15th (the ides) of March, 44 BC. He was attacked by a group of sixty people in the Roman Senate, and was stabbed 23 times. The first to strike a blow was Servilius Casca, who attacked Caesar from behind and stabbed him in the neck. In Shakespeare’s “Julius Caesar”, Casca utters the words “Speak, hands, for me!” just before making the fatal blow. The following line, uttered by Caesar, is more famous though: “Et tu, Brute?”

58. Body scanner org. : TSA
The Transportation Security Administration (TSA) was created in 2001, soon after the 9/11 attacks. TSA personnel carry out the baggage and body searches at US airports.