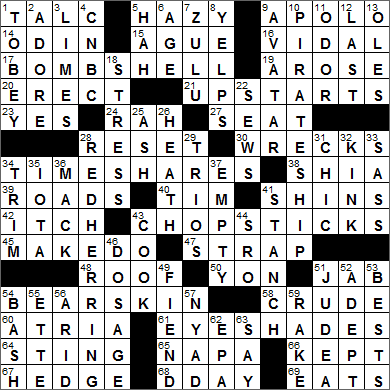 CROSSWORD SETTER: Lynn Lempel
THEME: One-Word, Two-Word … each of today’s themed answers is usually read as one word, but in our puzzle is reinterpreted as two words:

17A. Detonates a weapon in the underworld? : BOMBS HELL (from “bombshell”)
21A. Raises the price of some pastries? : UPS TARTS (from “upstarts”)
34A. Clocks trainees for a fabled race rematch? : TIMES HARES (from “timeshares”)
43A. Cuts up little bloodsuckers? : CHOPS TICKS (from “chopsticks”)
54A. Puts up with one’s family? : BEARS KIN (from “bearskin”)
61A. Scrutinizes the underworld? : EYES HADES (from “eyeshades”)

9. Ohno on skates : APOLO
Speed-skater Apolo Ohno has won more Winter Olympics medals than any other American. Ohno also did a great job winning the 2007 season of television’s “Dancing with the Stars”.

14. Valhalla’s ruling god : ODIN
In Norse mythology, Valhalla (“hall of the slain”) is a gigantic hall in the “world” of Asgard. Asgard and Valhalla are ruled by the god Odin, the chief Norse god.

15. Malarial fever : AGUE
An ague is a fever, one usually associated with malaria.

16. Gore who wrote “Lincoln” : VIDAL
Gore Vidal was an author and political activist from West Point, New York. Vidal’s most celebrated novel is probably “Myra Breckinridge”. His most controversial work has to be “The City and the Pillar” from 1948, which is cited as one of the first major novels to feature unambiguous homosexuality.

Gore Vidal’s 1984 historical novel “Lincoln” is about Abraham Lincoln’s time in the White House, as seen through the eyes of several people close to the president, as well as his assassin John Wilkes Booth. The novel was adapted for the small screen as a film in 1988 starring Sam Waterston as Abraham Lincoln and Mary Tyler Moore as Mary Todd Lincoln.

30. Junkyard jalopies : WRECKS
The origins of our word “jalopy” meaning “dilapidated old motor car” seem to have been lost in time, but the word has been around since the 1920s. One credible suggestion is that it comes from Jalapa, Mexico as the Jalapa scrap yards were the destination for many discarded American automobiles.

34. Clocks trainees for a fabled race rematch? : TIMES HARES (from “timeshares”)
“The Tortoise and the Hare” is perhaps the most famous fable attributed to Aesop. The cocky hare takes a nap during a race against the tortoise, and the tortoise sneaks past the finish line for the win while his speedier friend is sleeping.

39. They all lead to Rome, it’s said : ROADS
The expression “all roads lead to Rome” is used to mean “whatever way we do this, we’ll get the same result”. The phrase has been used since the 1100s and probably even earlier than that. The expression arises because the ancient Roman road system had all major roads radiating from Rome like spokes on a wheel.

42. Something calamine lotion alleviates : ITCH
Calamine is mainly zinc oxide, with a small percentage of iron oxide. Calamine is incorporated into a lotion that is used for many things, including treatment of sunburn and itching.

43. Cuts up little bloodsuckers? : CHOPS TICKS (from “chopsticks”)
Ticks are very small arachnids that live off the blood of mammals and birds. They are external parasites, and commonly infect their hosts with bacteria, viruses and protozoa. One of the most-famous tick-borne illnesses is Lyme disease.

61. Scrutinizes the underworld? : EYES HADES (from “eyeshades”)
Hades was the god of the underworld to the ancient Greeks. Over time, Hades gave his name to the underworld itself, the place where the dead reside. The term “Hades” was also adopted into the Christian tradition, as an alternative name for hell. But, the concept of hell in Christianity is more akin to the Greek “Tartarus”, which is a dark and gloomy dungeon located in Hades, a place of suffering and torment.

68. W.W. II turning point : D-DAY
The most famous D-Day in history was June 6, 1944, the date of the Normandy landings in WWII. The term “D-Day” is used by the military to designate the day on which a combat operations are to be launched, especially when the actual date has yet to be determined. What D stands for seems to have been lost in the mists of time although the tradition is that D just stands for “Day”. In fact, the French have a similar term, “Jour J” (Day J), with a similar meaning. We also use H-Hour to denote the hour the attack is to commence.

69. Vittles : EATS
“Victuals” is a term for food that is fit for consumption. We tend to pronounce “victuals” as “vittles”, and we use the term “vittles” and “victuals” interchangeably.

Down
1. Maguire of “The Great Gatsby” : TOBEY
The actor Tobey Maguire is most associated with the role of Spider-Man these days. I’m not much into comic book hero films, but I do kind of enjoy the understated way that Maguire takes on “Spidey”. Maguire has appeared in other hit films, like “Pleasantville” (1998), “The Cider House Rules” (1999) and “Seabiscuit” (2003). Off the screen, he is big into poker and it’s said that he has won over $10 million playing poker in Hollywood.

4. Network for market monitors : CNBC
CNBC is a business news channel owned by NBC. Launched in 1989, up until 1991 CNBC was known as the Consumer News and Business Channel.

9. James Cameron megahit of 2009 : AVATAR
In the James Cameron epic “Avatar”, the “blue people” are the Na’vi, the indigenous species that lives on the lush moon called Pandora. The main Na’vi character featuring in the film is the female Neytiri. According to Cameron, Neytiri was inspired by the Raquel Welch character in the movie “Fantastic Voyage” and the comic book character Vampirella.

10. Transport for William Kidd or Jack Sparrow : PIRATE SHIP
William Kidd was a Scottish privateer who went by the name “Captain Kidd”. Although Kidd was a privateer, someone authorized by the government to attack foreign shipping, he was eventually arrested and executed for piracy. There is common opinion held today that the charges against Kidd were actually trumped up. Captain Kidd’s story was the basis of a 1945 film called “Captain Kidd” starring Charles Laughton in the title role. Laughton also appeared as Captain Kidd in 1952’s comic movie “Abbott and Costello Meet Captain Kidd”.

Captain Jack Sparrow is the protagonist in the “Pirates of the Caribbean” series of movies. Sparrow is of course played by Johnny Depp. Depp has said that he based his portrayal of Sparrow partly on the Rolling Stones guitarist Keith Richards. I could believe that …

13. Exuberant flamenco cries : OLES
Flamenco is a style of Spanish music and dance. The origin of the word “flamenco” isn’t clearly understood, but the explanation that seems most credible to me is that it comes from Flanders in Northern Europe. Given that “flamenco” is the Spanish word for “Flemish” and Flanders is home to the Flemish people it makes perfect sense, doesn’t it?

22. Takes part in a bee : SEWS
Back in 18th-century America, when neighbors would gather to work for the benefit of one of their group, such a meeting was called a “bee”. The name “bee” was an allusion to the social nature of the insect. In modern parlance, a further element of entertainment and pleasure has been introduced, for example in a “quilting bee”, or even a “spelling bee”.

25. Mount Etna emission : ASH
Mt. Etna is the largest of three active volcanoes in Italy. Mt Etna is about 2 1/2 times the height of its equally famous sister, Mt. Vesuvius. The third of Italy’s famous volcanoes is Stromboli.

28. Purposeful misdirection : RED HERRING
The exact origin of the term “red herring”, meaning “something that misleads”, isn’t known. The most common explanation for the use of the phrase is that kippers (strong-smelling smoked herrings) were used to by fugitives to distract bloodhounds who were on their trail. Kippers become red-colored during the smoking process, and are no longer “white herrings”.

29. Musketeers and blind mice : TRIOS
Alexandre Dumas’ “Three Musketeers” are Athos, Porthos and Aramis, and their young protégé is D’Artagnan. A musketeer was an infantry soldier who was equipped with a musket. Funnily enough, the three “musketeers” really don’t use their muskets, and are better known for their prowess with their swords.

32. Glitch : KINK
“Glitch” comes into English from German via Yiddish. The original German word is “glitschen” meaning “to slip”. It is a relatively new term, generally applied to computer software bugs.

35. Teeny bit : IOTA
Iota is the ninth letter in the Greek alphabet. We use the word “iota” to portray something very small as it is the smallest of all Greek letters.

36. Big name in trucks : MACK
Mack Trucks was founded by John Mack in the early 1900s, after he had spent some years working in companies that made carriages and electric motor cars. Along with his two brothers, Mack started their company to focus on building heavy-duty trucks and engines.

54. Shindig : BASH
“Shindig” is such a lovely word, I think, describing a party that usually includes some dancing. Although its origin isn’t really clear, the term perhaps comes from “shinty”, a Scottish game similar to field hockey.

57. Long-distance swimmer Diana : NYAD
Diana Nyad is a long-distance swimmer. Nyad holds the distance record for a non-stop swim without a wet-suit, a record that she set in 1979 by swimming from Bimini to Florida. In 1975 she became the fastest person to circle Manhattan in a swim that lasted 7 hours 57 minutes. More recently, in 2013, she became the first person to swim from Cuba to Florida without the protection of a shark cage. She was 64 years old when she made that swim!