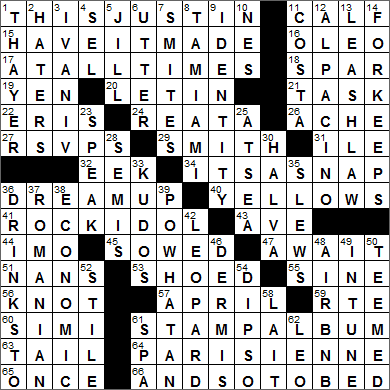 Today’s Wiki-est, Amazonian Googlies
Across
11. Dinner serving in the Prodigal Son parable : CALF
The Parable of the Prodigal Son is related in the Gospel of Luke. Someone who is “prodigal” is wasteful or extravagant. The parable tells of a man with two sons. The youngest asks for and receives his share of the family estate, and then spends it all unwisely. The “prodigal” son returns, to an unwelcoming older brother. The father, however, declares happily that his son “was lost and now is found”.

16. Stick in the refrigerator : OLEO
Emperor Louis Napoleon III of France announced a competition to develop a substitute for butter, a substitute that would be more accessible to the lower classes and more practical for the armed forces. A French chemist called Hippolyte Mege-Mouries came up with something he called oleomargarine in 1869, which was eventually manufactured under the trade name “margarine”. The name “oleomargarine” also gives us our generic term “oleo”.

19. Hunger : YEN
The word “yen”, meaning “urge”, has been around in English since the very early 1900s. It comes from the earlier word “yin” imported from Chinese, which was used in English to describe an intense craving for opium!

24. Bit of vaquero gear : REATA
“Reata” is the Spanish word for “lasso”. We tend to use the spelling “riata” in English, but sometimes can use the original Spanish word.

27. Gets back (to) : RSVPS
RSVP stands for “répondez s’il vous plaît”, which is French for “please, answer”.

29. Will with parts : SMITH
In the late eighties Will Smith was a successful rapper, but he ran foul of the IRS. When he was faced with an IRS-imposed penalty of $2.8 million he was close to becoming bankrupt. Fortunately, along came NBC with a proposal to build a sitcom around him, and “Fresh Prince of Bel-Air” was born.

36. Concoct : DREAM UP
“To decoct” is to extract the flavor of a liquid by boiling down and increasing the concentration. A related term is “to concoct”, meaning “to boil together”. We use the verb “to concoct” in figurative sense to mean to contrive, devise.

41. Many a Rolling Stone cover subject : ROCK IDOL
The iconic magazine “Rolling Stone” was founded in San Francisco in 1967. Jann Wenner was a cofounder, and is still the magazine’s chief editor. The name for the publication is taken from the 1950 song “Rollin’ Stone” recorded by Muddy Waters.

51. Servings with tandoori chicken : NANS
Naan (also “nan”) bread is very popular in Indian restaurants, as well as in other West, Central and South Asian cuisines. Indian Naan is traditionally baked in a clay oven known as a tandoor.

55. ___ wave : SINE
A sine wave is a mathematical function that describes a simple, smooth, repetitive oscillation. The sine wave is found right throughout the natural world. Ocean waves, light waves and sound waves all have a sine wave pattern.

57. It “hath put a spirit of youth in every thing,” per Shakespeare : APRIL
Here is the full text of William Shakespeare’s “Sonnet 98” …

From you have I been absent in the spring,
When proud-pied April, dressed in all his trim,
Hath put a spirit of youth in everything,
That heavy Saturn laughed and leaped with him.
Yet nor the lays of birds, nor the sweet smell
Of different flowers in odour and in hue,
Could make me any summer’s story tell,
Or from their proud lap pluck them where they grew:
Nor did I wonder at the lily’s white,
Nor praise the deep vermilion in the rose;
They were but sweet, but figures of delight
Drawn after you, – you pattern of all those.
Yet seem’d it winter still, and, you away,
As with your shadow I with these did play.

60. ___ Valley, Calif. : SIMI
Nowadays Simi Valley, California is perhaps best known as being home to the Ronald Reagan Presidential Library. If you ever get the chance to do so, the library is a great place to visit. There you can tour one of the retired Air Force One planes.

64. Coco Chanel, par exemple : PARISIENNE
Coco Chanel was a French fashion designer. Perhaps because I am a man, clothes design is not my forte. However, if I had to pick a designer whose clothes I really liked, it would be Chanel. She had a way of creating simpler designs that looked so elegant on a woman.

Down
1. “Casey at the Bat” writer : THAYER
“Casey at the Bat” is a poem written in 1888 by Ernest Thayer, first published in the San Francisco Examiner. The poem became very popular due to repeated live performances in vaudeville by DeWolf Hopper. Casey played for the Mudville Nine, and the last line of the poem is “But there is no joy in Mudville – mighty Casey has struck out.”

3. Czar known for his mental instability : IVAN IV
The Grand Prince of Moscow Ivan IV became known as Ivan the Terrible. The name “terrible” is a translation from Russian, and perhaps creates the wrong impression about the man. The Russian word is “Grozny”, which is more akin to “strict” and “powerful” rather than “cruel” or “abominable”.

5. Hill climber of note : JILL
The “Jack and Jill” nursery rhyme dates back at least to the 1700s:

“Bomberman” is a series of video games for which the first version was released in 1983. They are strategy games that use mazes.

11. ___ Brava (Spanish resort area) : COSTA
The Costa Brava is a section of coast in northeastern Catalonia, Spain stretching from north of Barcelona to the border with France. “Costa Brava” means “rugged coast” and was a term first coined in a local newspaper article in 1908.

12. “Ocean’s Thirteen” co-star : AL PACINO
Al Pacino seems to be best known for playing characters on both sides of the law. Pacino’s big break in movies came when he played Michael Corleone in “The Godfather”, a role that grew for him as the series of films progressed. But his Oscar-winning role was that of a blind ex-military officer in “Scent of a Woman”.

“Ocean’s 11” is a great film from 1960, starring Frank Sinatra as Danny Ocean. The original storyline is updated for the excellent 2001 remake, with George Clooney playing the lead. In the 1960 movie, the love interest is a character called Beatrice Ocean, played by Angie Dickinson. In the 2001 version, the love interest gets a new name, Tess Ocean, and is played by Julia Roberts. The 2001 remake (Called “Ocean’s Eleven”, note the spelling) spawned two sequels: “Ocean’s Twelve” in 2004 and “Ocean’s Thirteen” in 2007.

30. Crumbly Mideastern dessert : HALVA
Halvas are sweet confections found in many parts of the world. Halvas are generally flour-based or based on nut-butter like sesame paste. Sounds delicious …

33. “Mad props!” : KUDOS!
Our word “kudos” means acclaim given for an exceptional achievement. “Kudos” is not a plural, despite a common misapprehension. It is a singular noun derived from the Greek “kyddos” meaning “glory, fame”.

35. A host : SLEWS
Ahh … here’s an Irish word! Our usage of “slew” to mean “large number” has nothing to do with the verb “to slew”. The noun “slew” come into English in the early 1800s from the Irish word “sluagh” meaning “host, crowd, multitude”.

37. Language in which “hello” is “buna ziua” : ROMANIAN
Romania sits just east of Hungary and north of Bulgaria in Europe. Romania was formed from the union of two principalities in 1859, Moldavia and Wallachia. The Kingdom of Romania grew larger in size after WWI with the addition of three new regions, including the “vampirish” Transylvania.

39. Virginia tribe : POWHATAN
The Powhatan are a Native American people who mainly live in modern-day Virginia. The Powhatan were greatly impacted by the settling of the English in Jamestown in 1607. The resulting physical conflict paled in comparison to the devastation caused by the introduction of measles and smallpox from Europe.

42. One spotted in tall grass : LEOPARD
The four “big cats” are the tiger, lion, jaguar and leopard. The smallest of these is the leopard.

46. Base of a follicle : DERMIS
There are several types of follicle in the human body, the best known being the sockets in the skin from which hairs grow.

52. Metro entrance : STILE
A stile is a structure allowing people to pass over or through a fence, while at the same time preventing livestock from escaping. The derivative term “turnstile” describes a revolving structure in a wall or fence that allows the controlled passage of people.

54. Sponge : DIPSO
“Dipsomania” is a craving for alcohol to the point of damaging one’s health. “Dipsa” is the Greek for “thirst”, hence dipsomania is a “manic thirst”.

61. Beautician employer : SPA
The word “spa” migrated into English from Belgium, as Spa is the name of a municipality in the east of the country that is famous for its healing hot springs. The name “Spa” comes from the Walloon word “espa” meaning “spring, fountain”.

62. “The Wolf of Wall Street” star, familiarly : LEO
Hollywood star Leonardo DiCaprio is from Los Angeles, California. DiCaprio’s mother was visiting a museum in Italy when she was pregnant and felt the first kick of her unborn child. At the moment of that first kick, Mama DiCaprio was looking at a painting by Leonardo da Vinci, and so named her son Leonardo.

“The Wolf of Wall Street” is an entertaining 2013 biographical film about a corrupt New York City stockbroker. The movie is based on a memoir of the same name by Jordan Belfort. Directed by Martin Scorsese, it is his highest-grossing movie to date.