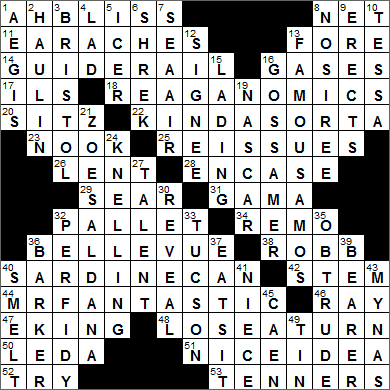 Today’s Wiki-est, Amazonian Googlies
Across
16. Rightmost column of the periodic table, e.g. : GASES
The rare gases are better known as the noble gases, but neither term is really very accurate. Noble gas might be a better choice though, as they are all relatively nonreactive. But rare they are not. Argon, for example, is a major constituent (1%) of the air that we breathe. The noble gases are the elements on the very right of the periodic table of the elements..

17. French pronoun : ILS
“Ils” is the French for “they”, if not referring to feminine nouns (when “they” translates as “elles”).

18. Supply-side policies tied to a political era : REAGANOMICS
The economic policies promoted by the Reagan administration in the eighties came to be known as “Reaganomics”. The policy had four main elements:

20. ___ bath : SITZ
A “sitz bath” is one in which the water comes up to the hips. It is usually a therapeutic bath used to treat discomfort in the lower part of the body. The term comes from the German “Sitzbad” meaning a bath (bad) in which one sits. “Sitzen” is German for “to sit”.

31. Vasco da ___ : GAMA
Vasco da Gama left on his first voyage of discovery in 1497. da Gama journeyed around the Cape of Good Hope, the southernmost tip of Africa, and across the Indian Ocean making landfall in India. Landing in India, his fleet became the first expedition to sail directly from Europe to the sub-continent. Vasco da Gama was well known for acts of cruelty, especially on local inhabitants. One of his milder atrocities was inflicted on a priest whom he labelled as a spy. He had the priest’s lips and ears cut off, and sent him on his way after having a pair of dog’s ears sewn onto his head.

32. Shipping platform : PALLET
There is a difference between a wooden pallet and a wooden skid, both of which are used for shipping. A pallet has boards on top and bottom, whereas a skid only has boards on top.

34. San ___ : REMO
The Italian city of San Remo sits on the Mediterranean, right on the border with France. In Italian the city is named Sanremo, just one word, although the spelling of “San Remo” dates back to ancient times.

36. Real-life New York hospital sometimes seen on “Law & Order: SVU” : BELLEVUE
Bellevue Hospital (now “NYC Health + Hospitals/Bellevue”) in New York City is the oldest public hospital in the country, having been founded way back in 1736. Originally an almshouse on the site of today’s New York City Hall, the facility relocated to a property known as Belle Vue farm. The farm property had been purchased by the city to quarantine the sick during yellow fever outbreaks.

44. Marvel superhero : MR FANTASTIC
The Marvel Comics superhero Mister Fantastic is the alter ego of super-scientist Reed Richards. In superhero form, Richards can stretch his body into any desired shape. Mister Fantastic is one of the founding members of the Fantastic Four, alongside the Invisible Woman, the Human Torch, and the Thing.

47. Squeezing : EKING
To “eke out” means to “make something go further or last longer”. For example, you could eke out your income by cutting back on expenses. I always have a problem with the commonly cited definition of “eke out” as “barely get by”. Close but no cigar, I say …

50. Mythological subject for Leonardo, Correggio and Rubens : LEDA
In Greek mythology, Leda was the beautiful Queen of Sparta who was seduced by Zeus when he took the form of a swan. Leda produced two eggs from the union. One egg hatched into the beautiful Helen, later to be known as Helen of Troy and over whom the Trojan War was fought. The other egg hatched into the twins Castor and Pollux. Castor and Pollux had different fathers according to the myth. Pollux was the son of Zeus and was immortal, while Castor was the son of Leda’s earthly husband, and so he was a mortal. William Butler Yeats wrote a famous sonnet called “Leda and the Swan” in 1924. Peter Paul Rubens made a copy of a painting called “Leda and the Swan” by Michelangelo, which is now lost.

Leonardo da Vinci’s “Leda and the Swan” is a painting that is known to have existed, but is now considered lost. Many copies, made by other artists, do however exist.

Correggio’s painting “Leda and the Swan” was executed around 1532. It can be seen today in the Gemäldegalerie Museum in Berlin

Peter Paul Rubens painted two versions of “Leda and the Swan”, one completed in 1601 and the other in 1602.

53. Sawbucks : TENNERS
“Sawbuck” is slang for a ten dollar bill. The term was applied to the bill as the Roman numeral X (which used to appear on the bill) resembles the end of sawhorse.

Down
1. Shield decorated with the head of a Gorgon : AEGIS
According to Homer’s “Iliad”, the aegis is either an animal skin or a shield that carried by Athena and Zeus. The aegis is also described as bearing the head of Gorgon, a female creature with hair made of venomous snakes. The aegis provided some level of protection to the bearer, a concept that has been extended to our contemporary usage of “aegis”. Someone under the aegis of someone else is protected or sponsored by that person.

3. British port from which John Cabot sailed to the New World in 1497 : BRISTOL
Giovanni Caboto (known in English as “John Cabot”) was an Italian explorer. Departing from Bristol in England, Cabot is believed to have been the first European to visit North America since the Vikings landed here in the 11th century. Many say that he landed in Newfoundland in 1497.

6. Donkey’s mate : SHREK
Before “Shrek” was a successful movie franchise and Broadway musical, it was a children’s picture book called “Shrek!” authored and illustrated by William Steig. The title “Shrek!” came from the German/Yiddish word Schreck, meaning “fear” or “terror”.

12. John Hancock, notably : SIGNEE
We use the term “John Hancock” to mean a signature. The reference is to the large and flamboyant signature placed by John Hancock on the Declaration of Independence. Hancock was President of the Continental Congress from 1775 to 1777.

13. Snack brand since 1975 : FAMOUS AMOS
Wally Amos was a talent agent, one who was in the habit of taking home-baked cookies with him as an enticement to get celebrities to see him. He was urged by friends to open a cookie store (the cookies were that delicious, I guess) and this he did in Los Angeles in 1975 using the name “Famous Amos”. The store was a smash hit and he was able build on the success by introducing his cookies into supermarkets. The brand was eventually bought up making Wally a rich man, and Famous Amos cookies are still flying off the shelf.

15. Freight : LADING
The verb “lade” meaning “to load” comes from an Old English word “hladan”. Lade also used to mean “to draw water” and indeed gave us our word “ladle”. So “lade” and “ladle” are close cousins.

16. Very light, delicate material : GOSSAMER
Something described as “gossamer” is light, delicate or flimsy. The term arose in the 1400s when it described spider webs that had been spun in harvested fields in the late fall. It is suggested that “gossamer” comes from “gos” (goose) and “sumer” (summer), the idea being that the silky spider webs resemble goose down, and goose were more commonly seen in the summer. Sounds like a stretch to me …

19. Sprint Cup awarder : NASCAR
In the world of NASCAR, what was called the Nextel Cup in 2004-2007, is now known as the Sprint Cup (as Sprint took over Nextel). Prior to 2004, the prize was called the Winston Cup.

21. Player of a green alien in “Guardians of the Galaxy” and a blue alien in “Avatar” : ZOE SALDANA
American actress Zoe Saldana played the Na’vi princess in “Avatar”, and Uhura in the 2009 movie “Star Trek”. Saldana seems to pick the right movies, as she is the only actress to have three different films in the top twenty at the box office for three consecutive weeks (“Avatar”, “The Losers” and “Death at a Funeral”).

24. Passing sounds? : KNELLING
The word “knell” is used for a solemn ring from a bell, often associated with death or a funeral. “Knell” comes the Old English “cnell” and is probably imitative in origin, sounding like a peal from a large bell.

32. Betrayal : PERFIDY
“Perfidy” is a deliberate breach of trust. The term originated from the Latin phrase “per fidem decipere”, meaning “to deceive through trustingness”.

33. City called “The Old Pueblo” : TUCSON
Tucson is the second largest city in Arizona (after Phoenix). The founding father of the city was Hugh O’Conor, yet another Irishman, but one who was raised in Spain. O’Conor was a mercenary working for Spain when he authorized the construction of a military fort called Presidio San Augustín del Tucsón in 1775, which eventually grew into the city that we know today. The Spanish name “Tucsón” comes from the local name “Cuk Ṣon”, which translates as “(at the) base of the black (hill)”.

36. Carnival person : BARKER
A barker is someone who works to attract attention for an entertainment event, trying to get patrons to buy a ticket. Barkers are often seen at circuses and funfairs. Apparently the term “barker” isn’t appreciated by those in the trade, and they prefer to be called “talkers”.

43. Repetitive sorts : MYNAS
Some species of myna (also “mynah”) bird are known for their ability to imitate sounds.

45. French city once held by William the Conqueror : CAEN
Caen, on the River Orne, lies in the Calvados department of France in the northwest of the country. Caen is famous for the WWII Battle of Caen that left the town practically destroyed. Caen is also the burial place of the Norman King William I of England, also known as William the Conqueror after his victory at the Battle of Hastings in 1066.

49. Big natural resource in Malaysia : TIN
The Latin word for tin is “stannum”, and so tin’s atomic symbol is “Sn”. One of the ores used as a source of tin is “stannite”.