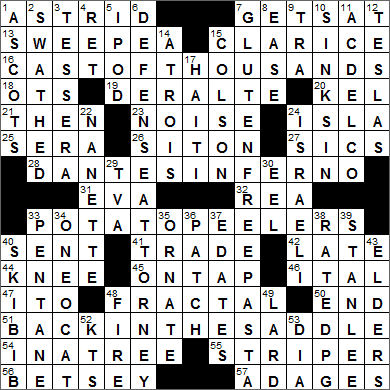 Today’s Wiki-est, Amazonian Googlies
Across
1. Viking girl in “How to Train Your Dragon” : ASTRID
“How to Train Your Dragon” is a series of children’s books by English author Cressida Cowell. The main character in the stories is Hiccup Horrendous Haddock III, a Viking who is able to speak “Dragonese”. The books were adapted into two feature films and two animated TV series. A tough Viking girl named Astrid was introduced for the purpose of the movies, a girl who becomes Hiccup’s love interest.

13. Comics tyke : SWEE’PEA
Originally Popeye used the nickname “Swee’pea” to address his girlfriend Olive Oyl. Then along comes a baby, found on Popeye’s doorstep. Popeye adopts the little guy and raises him, calling him “Swee’Pea”.

15. Starling of book and film : CLARICE
Clarice Starling is the FBI Agent in the Thomas Harris novel “The Silence of the Lambs”. In the movie, Clarice was played by Jodie Foster.

19. Postwar German nickname : DER ALTE
Konrad Adenauer was the first Chancellor of West Germany after WWII, taking office in 1949 at the age of 73. Adenauer was 87 years old when he left office. Understandably perhaps, his nickname was “Der Alte”, German for “the old man”. Adenauer spent much of WWII in prison, courtesy of Herr Hitler.

28. Its main characters go to hell : DANTE’S INFERNO
Dante Alighieri’s “Divine Comedy” is an epic poem dating back to the 14th century. The first part of that epic is “Inferno”, which is the Italian word for “Hell”. In the poem, Dante is led on a journey by the poet Virgil, starting at the gates of Hell on which are written the famous words “Abandon all hope, ye who enter here”.

32. Chris who sang “The Road to Hell,” 1989 : REA
Chris Rea is a singer-songwriter and respected blues guitar player from England. Rea’s biggest hit is a song that he wrote himself called “Fool (If You Think It’s Over”), released in 1978.

46. Emphatic type: Abbr. : ITAL
Italic type leans to the right. The style is known as “italic” because the stylized calligraphic form of writing originated in Italy, probably in the Vatican.

47. Lance on a bench : ITO
Judge Lance Ito came in for a lot of criticism for his handling of the O.J. Simpson murder trial. The lead prosecutor in that trial was Marcia Clark, you might recall. I read the book that’s Clark wrote about the trial called “Without a Doubt”, and she pointed out one trait of Judge Ito that I think is quite telling. Ito would almost always refer to the prosecutor as “Marcia”, while addressing the men on both sides of the case as “Mister”.

48. Snowflake or crystal shape : FRACTAL
A fractal is a fascinating geometric shape, one that can be split into parts, each of which is a smaller version (almost identical to) of the larger shape. The name “fractal” comes from the Latin “fractus” meaning “broken” or “fragmented”. Fractals are found all over nature, most notably the shapes created by ice crystals. It can be hard to tell the difference between the shapes of ice as it freezes on glass, viewed with the eye or viewed under a microscope. Fractals can also be seen in clouds, snow flakes, and even in cauliflower and broccoli!

54. Like Charlie Brown’s kite, ultimately : IN A TREE
Charlie Brown is the main character in the long-running comic strip called “Peanuts”, created by Charles Schulz. Charlie has several persistent frustrations in his life, including an inability to fly a kite. The focus of his kite-flying frustration is the dreaded Kite-Eating Tree.

55. Large game bass : STRIPER
The striped bass (also called “striper”) is found along the Atlantic coast of North America, but also in inland waterways where it has been introduced for sport fishing. It is the state fish of Rhode Island, South Carolina and Maryland.

56. Great-aunt in “David Copperfield” : BETSEY
“David Copperfield” is the eighth novel penned by English author Charles Dickens, first published in serial form from 1848 to 1849. The novel is seen as a somewhat autobiographical work, with many characters and events mirrored in Dickens’ own life.

Down
1. Dandy wear : ASCOTS
An Ascot tie is a horrible-looking (I think!) wide tie that narrows at the neck, which these days is only really worn at weddings. The tie takes its name from the Royal Ascot horse race at which punters still turn up in formal wear at Ascot Racecourse in England.

3. Byzantine art bit : TESSERA
A tessera is an individual tile used in making a mosaic.

5. Light music source? : IPOD
The iPod is Apple’s signature line of portable media players. The iPod first hit the market in 2001 with a hard drive-based device, now known as the iPod Classic. Later models all use flash memory, allowing a smaller form factor. The smallest of the flash-based models is the iPod Shuffle, which was introduced in 2005.

7. Rice elbows, e.g. : GLUTEN-FREE PASTA
Gluten is a protein mixture found in foods processed mainly from wheat. The sticky properties of gluten are used in making bread, giving dough its elasticity and making the final product chewy. “Gluten” is the Latin word for “glue”.

11. Big name in car parts : ACDELCO
Delco Electronics took its name from Dayton Engineering Laboratories Company. Delco is often seen in the brand name “ACDelco”. The AC stands for Albert Champion, who was famous for the development of the spark plug.

12. Automotive models S and X : TESLAS
Tesla Motors is a manufacturer of electric vehicles based in Palo Alto, California. Tesla is noted for producing the first electric sports car, called the Tesla Roadster. The current base price of a roadster is about $100,000, should you be interested …

15. Chuck who advised Nixon : COLSON
Chuck Colson was President Richard Nixon’s Special Counsel, and someone who got caught up in the Watergate scandal. Colson became the first person in the Nixon administration to go to jail, serving seven months for obstruction of justice. After regaining his freedom, Colson became an Evangelical Christian leader and founded the prisoner outreach program Prison Fellowship.

17. French-speaking land where John James Audubon was born : HAITI
The Republic of Haiti occupies the smaller, western portion of the island of Hispaniola in the Caribbean. The rest of the island is taken up by the Dominican Republic. Haiti is one of only two nations in the Americas to have French as an official language, the other being Canada.

John James Audubon was a Haitian-born French-American ornithologist and painter. Audubon studied almost all types of American birds, and created colorful paintings of them in their natural habitats. His illustrated book “The Birds of America” was published in sections between 1827 and 1838, and is respected as one of the finest ornithological works of all time.

29. Power inits. beginning in 1933 : TVA
The Tennessee Valley Authority (TVA) has to be one of America’s great success stories when it comes to economic development. Created in 1933, the TVA spearheaded economic development in the Tennessee Valley at the height of the Great Depression. Central to the success was the federally-funded construction of flood-control and electricity-generation facilities.

34. Old sandlot game : ONE-O’-CAT
One-o’-cat, or more properly “one old cat”, is an abbreviated form of baseball with a home plate and just one base.

35. Baroque : ORNATE
Something described as “baroque” is extremely ornate and convoluted. The term comes from the Baroque Period, in which many of the arts focused on great detail and elaborate design.

38. Fairly clean, so to speak : RATED PG
The Motion Picture Association of America’s (MPAA) film-rating system (PG-13, R, etc.) is purely voluntary and is not backed by any law. Movie theaters agree to abide by the rules that come with the MPAA ratings in exchange for access to new movies.

39. Comic book writer with a National Medal of Arts : STAN LEE
Stan Lee did just about everything at Marvel Comics over the years, from writing to being president and chairman of the board. If you like superhero movies based on the characters from Marvel Comics, then you could spend a few hours trying to spot Stan Lee in those films as he has a penchant for making cameo appearances. Lee can be spotted in “X-Men” (2000), “Spider-Man” (2002), “Hulk” (2003), “Fantastic Four” (2005), “Iron Man” (2008) and many other films.

52. Some chess pieces: Abbr. : KTS
Knights (kts.) are the only pieces on a chessboard that can jump over other pieces.