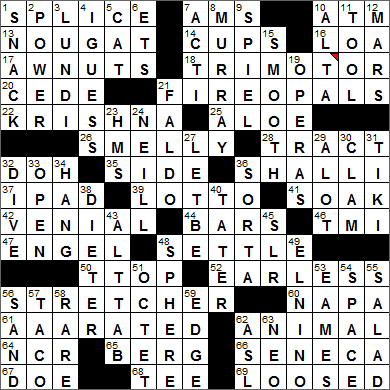 13. 3 Musketeers filling : NOUGAT
Today’s 3 Musketeers candy bar comprises a chocolate whipped filling in a chocolate covering. There’s a “3” in the name of the bar because it was introduced in 1932 with three pieces in one package, with chocolate, strawberry and vanilla fillings. The latter flavors were dropped during WWII due to wartime sugar restrictions.

16. Mauna ___ : LOA
Mauna Loa on the “big island” of Hawaii is the largest volcano on the planet (in terms of volume). The name “Mauna Loa” is Hawaiian for “Long Mountain”.

18. Ford aircraft of the 1920s-’30s : TRIMOTOR
The Stout Metal Airplane Division of the Ford Motor Company made the Ford Trimotor in the twenties and thirties, a three-engined transport aircraft. There are a handful of “Tin Geese” still flying today.

22. Hindu god pictured playing a flute : KRISHNA
In the Hindu tradition, Krishna is recognized as the eighth avatar (incarnation) of Lord Vishnu. Krishna is usually depicted as a boy or young man playing a flute.

26. Like Liederkranz cheese : SMELLY
Liederkranz is a American cheese, a re-creation of Europe’s Limburger cheese. Perhaps a little disappointingly, Liederkranz was invented by Emil Frey, the same man who later came up with Velveeta.

32. Outburst accompanying a facepalm : D’OH!
“The Simpsons” is one of the most successful programs produced by the Fox Broadcasting Company. Homer Simpson’s catchphrase is “D’oh!”, which became such a famous exclamation that it has been included in the Oxford English Dictionary (OED) since 2001. “D’oh!” can be translated as “I should have thought of that!”

39. Alternative to Mega Millions : LOTTO
Originally “Lotto” was a type of card game, with “lotto” being the Italian for “a lot”. We’ve used “lotto” to mean a gambling game since the late 1700s.

42. Minor, as a sin : VENIAL
In some Christian denominations, sins can be either venial or mortal in terms of severity, with mortal sins being the more grievous.

50. Onetime Mustang option : T-TOP
A T-top is a car roof that has removable panels on either side of a rigid bar that runs down the center of the vehicle above the driver.

The Ford Mustang car was introduced in 1964. Back then the Mustang wasn’t a brand new design, but was based on the Ford Falcon. The Mustang was the first of the “pony cars”, American models that are compact and affordable, as well as sporty in image and performance.

52. Like elephant seals : EARLESS
Elephant seals are very large, but take their name from the large proboscis of the male, which is said to resemble the trunk of an elephant.

64. Big mfr. of 10-Acrosses : NCR
(10A. Bill issuer, for short : ATM)
NCR is an American company that has been in business since 1884, originally called the National Cash Register Company. The company has done well in a market where new technologies seem to be constantly disrupting the status quo.

65. North Atlantic hazard : BERG
An iceberg is a large piece of freshwater ice that is floating freely after having broken off from a glacier or ice shelf. Out use of “iceberg” comes from the Dutch word for the same phenomenon “ijsberg”, which translates literally as “ice mountain”.

66. Six Nations tribe : SENECA
The Seneca nation’s name came from their principal village of Osininka. There is no link at all with Seneca the famous Roman statesman, and the similarity in name is just a coincidence.

67. Jane in court cases : DOE
Although the English court system does not use the term today, “John Doe” first appeared as the “name of a person unknown” in England in 1659, along with another unknown, Richard Roe. The female equivalent of John Doe is Jane Doe, with the equivalent to Richard Roe being Jane Roe (as in Roe v. Wade, for example).

Down
3. Day before mardi : LUNDI
In French, “lundi” (Monday) is the day before “mardi” (Tuesday).

8. Andy who won Olympic gold in tennis in 2012 : MURRAY
Andy Murray is a tennis player from Scotland who has been the British number one for several years now. Much to the delight of the locals, Murray won the Wimbledon Championship in 2013, making him the first British male player to win in 77 years. Murray also won Olympic gold in the 2012 Summer Olympics in London.

9. Pitcher’s delivery : SPIEL
A spiel is a lengthy speech or argument designed to persuade, like a sales pitch. “Spiel” comes to us from German, either directly (“spiel” is the German for “play”) or via the Yiddish “shpil”.

10. Province bordering Sask. : ALTA
Alberta (Alta.) is a big province, about the size of Texas. Alberta is named after Princess Louise Caroline Alberta, the fourth child of Queen Victoria and Prince Albert. Princess Louise also donated her name to Lake Louise, the large glacial lake in the province, now within the bounds of Banff National Park.

12. Chocolate treat since 1932 : MARS BAR
Having lived on both sides of the Atlantic, I find the Mars Bar to be the most perplexing of candies! The original Mars Bar is a British confection (and delicious) first manufactured in 1932. The US version of the original Mars Bar is called a Milky Way. But there is candy bar called a Milky Way that is also produced in the UK, and it is completely different to its US cousin, being more like an American “3 Musketeers”. And then there is an American confection called a Mars Bar, something different again. No wonder I gave up eating candy bars …

19. Works with librettos : OPERAS
A “libretto” can be the book that contains the text of a dramatic musical work, with the text also being called a libretto.

21. Golf Channel analyst Nick : FALDO
Nick Faldo is an English golfer, a winner of six major tournaments and a former World No. 1. For some years now Faldo has been the lead golf analyst for CBS Sports. In 2009 he was knighted by Queen Elizabeth II, so if you’re chatting with him, don’t forget to address him as Sir Nick …

24. Sam of “Jurassic Park” : NEILL
Sam Neill is a very talented actor from New Zealand. I really enjoyed Neill in a 1983 television miniseries called “Reilly, Ace of Spies”, about a British spy operation during WWI. He is perhaps better-known for his roles in the movies “Omen III”, “Dead Calm”, “Jurassic Park” and “The Hunt for Red October”.

30. Place for steamers : CLAM BAR
Soft-shell clams are so called because they have thin calcium carbonate shells that are easily broken. They are known as “steamers”, especially in the New England where they are often served at a clambake.

31. Place to order a mai tai, maybe : TIKI BAR
The world’s first tiki bar was called “Don the Beachcomber”, and was opened in L.A. in 1933 by Ernest Gantt (also known as “Donn Beach”). The bar became famous for its exotic rum cocktails. Gantt was called to serve in WWII, and the business expanded dramatically under his ex-wife’s management so that there was a 160-restaurant chain waiting for Gantt when he returned stateside.

The Mai Tai cocktail is strongly associated with the Polynesian islands, but the drink was supposedly invented in 1944 in Trader Vic’s restaurant in Oakland, California. One recipe is 6 parts white rum, 3 parts orange curaçao, 3 parts Orgeat syrup, 1 part rock candy syrup, 2 parts fresh lime juice, all mixed with ice and then a float added of 6 parts dark rum.

32. Low-class watering hole : DIVE BAR
“Dive” is slang for a disreputable or run-down bar or nightclub. The term dates back to the 1870s and probably arose from the sense that won had to “dive down” into such an establishment, as they were usually located in basements.

40. ___ Tots : TATER
Ore-Ida’s founders came up with the idea for Tater Tots when they were deciding what to do with residual cuts of potato. They chopped up the leftovers, added flour and seasoning, and extruded the mix through a large hole making a sausage that they cut into small cylinders. We eat 70 million pounds of this extruded potato every year!

45. Camera with a mirror-and-prism system, for short : SLR
SLR stands for “single lens reflex”. Usually cameras with changeable lenses are the SLR type. The main feature of an SLR is that a mirror reflects the image seen through the lens out through the viewfinder, so that the photographer sees exactly what the lens sees. The mirror moves out of the way as the picture is taken, and the image that comes through the lens falls onto unexposed film, or nowadays onto a digital sensor.

49. Weather phenomenon named for baby Jesus : EL NINO
When the surface temperature of much of the Pacific Ocean rises more that half a degree centigrade, then there is said to be an El Niño episode. That small temperature change in the Pacific has been associated with climatic changes that can stretch right across the globe. El Niño is Spanish for “the boy” and is a reference to the Christ child. The phenomenon was given this particular Spanish name because the warming is usually noticed near South America and around Christmas-time.

53. Furniture designer Charles : EAMES
Charles and Ray Eames were a husband-wife team of furniture designers. One of the more famous of their designs is the Eames lounge chair that comes with an ottoman. This trendy piece of furniture featured in a late episode of the television show “Frasier”. In the show, Frasier’s Dad remarks that the Eames chair is so comfortable that he might have gotten rid of his tatty old recliner a long time ago.

62. Hand communication, for short : ASL
It’s really quite unfortunate that American Sign Language (ASL) and British Sign Language (BSL) are very different, and someone who has learned to sign in one cannot understand someone signing in the other.

63. Prefix with cortex : NEO-
The neocortex is part of the brain, the part of the cerebral cortex that is especially large in higher animals.