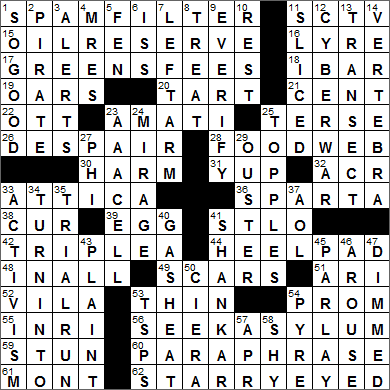 Today’s Wiki-est, Amazonian Googlies
Across
1. Junk removal service : SPAM FILTER
Apparently the term “spam”, used for unwanted email, is taken from a “Monty Python” sketch. In the sketch (which I’ve seen) the dialog is taken over by the word Spam, a play on the glut of canned meat in the markets of Britain after WWII. So “spam” is used for the glut of emails that takes over online communication. I can just imagine nerdy Internet types (like me) adopting something from a “Monty Python” sketch to describe an online phenomenon …

16. Erato played one : LYRE
In Greek mythology, Erato was the Muse of lyric poetry and is often depicted playing a lyre.

17. Round numbers? : GREENS FEES
One can green fees or greens fees to play a round of golf.

19. Set for a regatta : OARS
The word “regatta” is Venetian dialect and was originally used to describe boat races among the gondoliers of Venice on the Grand Canal back in the mid-1600s.

21. 1850s Flying Eagle, e.g. : CENT
The Flying Eagle cent was the first “small-sized” cent minted in the US, and was produced from 1856 to 1858. The design was a little difficult to produce and the dies used in manufacture had to be replaced quite often. As a result, the Flying Eagle was replaced by the Indian Cent in 1859.

23. Violinist’s prize : AMATI
The first of the Amati family to make violins was Andrea Amati, who lived in the 14th century. He was succeeded by his sons, Antonio and Girolamo. In turn, they were succeeded by Girolamo’s son, Nicolo. Nicolo had a few students who achieved fame making musical instruments as well. One was his own son, Girolamo, and another was the famed Antonio Stradivari.

… then black despair,
The shadow of a starless night, was thrown
Over the world in which I moved alone.

28. System of what eats what : FOOD WEB
A food chain is a series of organisms, the smallest of which gets eaten by a larger one, which in turn feeds a still larger one, etc. Food chains are collected into a food web.

36. Ancient Greek state : SPARTA
Sparta was a city-state in ancient Greece, famous for her military might. Spartan children had a tough upbringing, and newborn babies were bathed in wine to see if the child was strong enough to survive. Every child was presented to a council of elders that decided if the baby was suitable for rearing. Those children deemed too puny were executed by tossing them into a chasm. We’ve been using the term “spartan” to describe something self-disciplined or austere since the 1600s.

39. Challah need : EGG
Challah is a special braided bread that is eaten by Ashkenazi Jews on the Sabbath. The bread is served to commemorate the manna that fell from the heavens as the Israelites wandered around the desert after the Exodus from Egypt.

41. 1944 battle site : ST LO
Saint-Lô is a town in Normandy that was occupied by Germany in 1940. Saint-Lo stood at a strategic crossroads and so there was intense fighting there during the Normandy invasion of 1944. After a prolonged bombardment, very little of the town was left standing.

51. N.L. West team : ARI
The Arizona Diamondbacks joined Major League Baseball’s National League in 1998. By winning the World Series in 2001, the Diamondbacks became the fastest expansion team to do so in Major League history.

52. TV handyman : VILA
“This Old House” first aired in 1979, on PBS, with Bob Vila as host. After ten years on the show, Vila was able to make extra income with commercial endorsements. These earnings caused conflict with commercial-free PBS, and so Vila was replaced by Steve Thomas.

53. Attenuated : THIN
“To attenuate” is to reduce in intensity or effect, or to make thin or slender.

54. Occasion to choose a royal court : PROM
I guess the prom king and prom queen make up the royal court.

55. Religious inscription : INRI
The letters written on the cross on which Jesus died were “INRI”. INRI is an initialism for the Latin “Iesus Nazarenus, Rex Iudaeorum”, which translates into English as “Jesus the Nazarene, King of the Jews”.

61. High point of géographie : MONT
In a French, a “mont” (mount) is a feature of a region’s “géographie” (geography).

Down
4. G.I. fare : MRES
The Meal, Ready-to-Eat (MRE) comes in a lightweight package that’s easy to tote around. The MRE replaced the more cumbersome Meal, Combat, Individual (MCI) in 1981, a meal-in-a-can. In turn, the MCI had replaced the C-ration in 1958, a less sophisticated meal-in-a-can with a more limited choice.

9. Internet-based Homeland Security program used by employers : E-VERIFY
The Department of Homeland Security (DHS) introduced E-Verify in 1997. It is a program designed to prevent illegal aliens from obtaining employment. Employers can vet potential employees for eligibility.
.
12. Large-scale spread of viruses, say : CYBERWAR
A computer virus has characteristics very similar to a virus found in nature. It is a small computer program that can copy itself and can infect another host (computer).

24. Sight on a hot road : MIRAGE
A mirage occurs when light rays are bent by passing say from cold air to warmer air. The most often cited mirage is a “lake” seen in a desert, which is actually the blue of the sky and not water at all. The word “mirage” comes to us via French from the Latin “mirare” meaning “to look at in wonder”. “Mirage” has the same root as our words “admire” and “mirror”.

27. N.L. East team : PHI
Philadelphia’s baseball team was founded in 1883 as the Quakers, with the name changing to the Philadelphias and Phillies not long into the team’s history. The Phillies have been based in the same city using the same team name longer than any other team in US professional sports.

37. Service with a 1-Across : AOL
Founded as Quantum Computer Services in 1983, the company changed its name in 1989 to America Online. As America Online went international, the acronym AOL was used in order to shake off the “America-centric” sound to the name. During the heady days of AOL’s success the company could not keep up with the growing number of subscribers, so people trying to connect often encountered busy signals. That’s when users referred to AOL as “Always Off-Line”.

41. Monterey Pop Festival performer of 1967 : SHANKAR
Ravi Shankar was perhaps the most famous virtuoso (to us Westerners) from the world of Indian classical music, and was noted for his sitar playing. Also, Shankar was the father of the beautiful pop singer Norah Jones.

45. Cumulative series of bets : PARLAY
A “parlay” is a combination wager, one that links two or more bets. All bets have to win in order to collect on a parlay.

46. Pique : AROUSE
The words “whet” and “pique” can both be used in the sense of sharpening or awaking one’s interest or desire.

50. Old Olds : CIERA
Oldsmobile made the Cutlass Ciera from 1982 to 1996. The Ciera was the brand name’s most successful model.

57. 4/ : APR
The exact etymology of “April”, the fourth month of our year, seems to be uncertain. The ancient Romans called it “mensis Aprilis”, which roughly translated as “opening month. The suggestion is that April is the month in which fruits, flowers and animals “open” their life cycles.