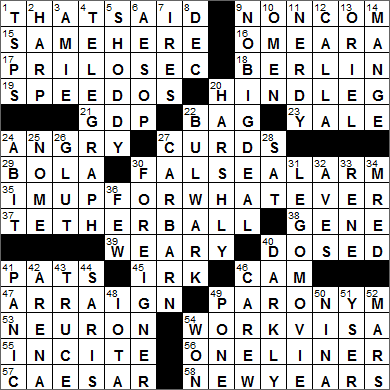 Today’s Wiki-est, Amazonian Googlies
Across
9. Private overseer : NONCOM
An NCO is a non-commissioned officer in the armed forces. Usually such an officer is one who has earned his or her rank by promotion through the enlisted ranks. A good example would be a sergeant.

16. Mark on a golf course : O’MEARA
Mark O’Meara is an American golfer from Goldsboro, North Carolina. He is known as one of the American players who competes in international tournaments more than most, and has a reputation as a real gentleman all around the world.

17. Treatment for peptic ulcers : PRILOSEC
Prilosec is a brand name for the drug omeprazole. It is a “proton-pump inhibitor”, meaning that is reduces the production of gastric acid.

19. Small suits : SPEEDOS
Speedo brand swimwear was first produced in Australia in 1928, by a hosiery company that wanted to diversify. The brand name was chosen after a slogan competition among employees was won by “Speed on in your Speedos”. It was a long time ago, I guess …

21. Econ 101 topic : GDP
A country’s Gross National Product (GNP) is the value of all services and products produced by its residents in a particular year. GNP includes all production wherever it is in the world, as long as the business is owned by residents of the country concerned. Gross Domestic Product (GDP) is different, although related, and is the value of all services and goods produced within the borders of the country for that year.

23. Home of the Beinecke Library : YALE
The Beinecke Rare Book & Manuscript Library is part of the Yale University Library.

27. Bowlful for Miss Muffet : CURDS
Little Miss Muffet sat on a tuffet eating her curds and whey, in the popular nursery rhyme. A tuffet is a low seat or a footstool, another word for a pouffe or a hassock. When milk curdles it separates into two parts, the solid curds and the liquid whey.

29. Weighted weapon used by the Inca army : BOLA
Bolas are heavy balls connected by cords that constitute a throwing weapon. Bolas are often used to capture animals by tripping them as they run. The weapon is usually associated with gauchos, the South American cowboys, although there is evidence that the Inca army used them in battle.

38. ___ therapy : GENE
Gene therapy is an experimental technology used to treat disease. The basic principle is to transplant genes into a patient’s cells in order to cure a disease caused by the absence of that gene.

41. 2015 Super Bowl winners, familiarly : PATS
The New England Patriots football team was founded in 1959 as the Boston Patriots. The “Patriots” name was selected from suggestions made by football fans in Boston. The team played at several different stadiums in the Boston area for just over ten years, before moving to their current home base in Foxborough, Massachusetts. At the time of the move, the “Boston” name was dropped and changed to “New England”.

46. Part of an auto engine : CAM
Cams are wheels found on the cam shaft of a car’s engine that are eccentric in shape rather than circular. The rotation of the cams causes the intake and exhaust valves of the cylinders to open and close.

47. Charge : ARRAIGN
In the law, to arraign someone is to call a person before a court to answer charges that have been brought.

53. Cell transmitter : NEURON
A nerve cell is more correctly called a neuron, and the long nerve fiber that is part of a neuron is called the axon. A neuron that has no definite axon is referred to as “apolar” or “nonpolar”. In apolar neurons the nerve impulses radiate in all directions.

54. Something an alien may have : WORK VISA
A visa is a usually a stamp in one’s passport, an indication that one is authorized to enter a particular country. The word “visa” comes into English, via French, from the Latin expression “charta visa” meaning “paper that has been seen”, or “verified paper”.

56. Mitch Hedberg’s “I’m against picketing, but I don’t know how to show it,” e.g. : ONE-LINER
Mitch Hedberg was a stand-up comedian from Saint Paul, Minnesota. He made a lot of jokes about his drug use, and in 2003 he was arrested for possession of heroin. He was found dead in a hotel room in 2005, having overdosed on cocaine and heroin.

57. Leader at the Battle of Alesia : CAESAR
The Battle of Alesia was the last major engagement in the Gallic Wars between the Gauls and the Roman Republic. The leader of the Roman forces was Julius Caesar, with Mark Antony one of his cavalry commanders. After Caesar’s victory, Gaul (modern-day France, roughly) was became a Roman province. The old city of Alesia was located in Burgundy, France.

Down
2. Symbol on an Irish euro coin : HARP
Euro coins are issued by all the participating European states. The reverse side is a common design used by all countries, whereas the obverse is a design specific to each nation. For example, the one euro coin issued by Malta features the Maltese Cross. That Maltese euro is legal tender right across the eurozone. The Irish euro features a harp.

3. French date, often : AMIE
A male friend in France is “un ami”, and a female friend is “une amie”.

6. Who told “The Goose That Laid the Golden Eggs” : AESOP
In the Aesop fable “The Goose That Laid the Golden Eggs”, a couple own a hen that lays a golden egg every day. The greedy pair surmise that there is a lump of gold inside the hen, and so they kill her in search of the precious metal. They find nothing, and are left without their daily windfall of a golden egg.

8. Yule time: Abbr. : DEC
“Yule” celebrations coincide with Christmas, and the words “Christmas” and “Yule” have become synonymous in much of the world. However, Yule was originally a pagan festival celebrated by Germanic peoples. The name “Yule” comes from the Old Norse word “jol” that was used to describe the festival.

12. Showy white flower : CALLA
The Calla Lily is a common name for a lily of the genus Zantedeschia. There is a lily genus called Calla, but the Calla Lily isn’t in it. Now that, that is confusing …

13. Old townhouse feature : ORIEL
An oriel window is a bay window that projects from a wall, but does not reach all the way to the ground.

14. Hair loss cause, perhaps : MANGE
Mange is a skin disorder in animals caused by parasitic mites that embed themselves in the skin, perhaps living in hair follicles. The same disorder in humans is called scabies.

22. Defensive wall : BULWARK
Our word “bastion”, meaning “well-fortified position”, comes from the Old French “bastille”, a word for “fortress”. A bastion (also called a “bulwark”) is an angular structure that juts out from a fortified wall. Guards inside the bastion can fire along the outside of the wall.

25. Gold rush town once called Anvil City : NOME
In 1899, the Alaska city of Nome was briefly known as Anvil City by locals to avoid confusion with the nearby city of Cape Nome. However, the US Post Office refused to approve the change, and so the name was immediately changed back to Nome.

27. Bus and trolley shelter : CARBARN
A carbarn is a large structure used for housing streetcars, railroad cars or buses.

30. Group whose fourth album, “4,” was #1 for 10 weeks in 1981 : FOREIGNER
I always think that the rock band Foreigner has a very apt name. The band was formed in 1976 by two British guys along with an American who were all living in New York City. Foreigner’s biggest hit is “I Want to Know What Love Is”.

31. Hit 2014 animated film, with “The” : LEGO MOVIE
“The LEGO Movie” is a 2014 computer animated film in which all the characters are Lego figures. Apparently “The Lego Movie” was well received, and there’s already a sequel in the works.

32. Class of birds : AVES
In scientific classification, birds belong to the class “Aves”. “Aves” is Latin for “bird”.

33. French film director Clément : RENE
René Clément was a director and screenwriter from France. Clément won an Oscar for Best Foreign Language Film on two occasions: “The Walls of Malapaga” (1949) and “Forbidden Games” (1952).

34. Stable character of old TV : MR ED
The sitcom “Mister Ed” first aired in 1961 and ran for almost five years. It was a very successful show (and even made it to Ireland!). Mister Ed, the talking horse, was a palomino that had the real name of Bamboo Harvester. Mister Ed’s “voice” was that of actor Allan “Rocky” Lane, a star of a lot of B-movie westerns from the forties and fifties. In the show, Mister Ed would only talk to the lead (human) character Wilbur, played by Alan Young, leading to some hilarious situations. Mister Ed had a stunt double and stand-in for the show, another horse called Pumpkin. Pumpkin later made frequent appearances on the show “Green Acres”.

44. Air India flight attendants’ attire : SARIS
Air India is the flag carrier airline of India, although it is only the third largest in terms of passengers carried.

46. 1977 A.L. M.V.P. born in Panama : CAREW
Rod Carew is a former Major League Baseball player from Panama. Actually. Carew is a “Zonian”, meaning that he was born in the Panama Canal Zone, a political entity that existed for decades from 1903.

48. Smidge : IOTA
Iota is the ninth letter in the Greek alphabet. We use the word “iota” to portray something very small as it is the smallest of all Greek letters.

49. Southern bread : PONE
“Pone” is another word for corn bread, from the Powhatan word “apan” meaning “something baked”.

50. ___ Myers, “24” character : NINA
Nina Myers is a great character in the TV series “24”, one of the “good guys” who is unmasked as a villain. Myers is portrayed by actress Sarah Clarke. Clarke ended up playing a very similar character on the TV show “Covert Affairs” a few years later.

51. Belgian river deliberately flooded during W.W. I : YSER
The Yser originates in northern France and flows through Belgium into the North Sea. The Yser is often associated with WWI as it figured in a major battle early in the conflict. In the first three months of the war, the German Army pushed almost completely through Belgium, inflicting heavy losses on the Belgian Army as the defenders were forced to fight a fast-moving rearguard action. The Germans were intent on pushing right through Belgium and across France in a “race to the sea”. But the Belgians, with the help of their Allies, decided to make a final stand at the Yser Canal in an effort to prevent the Germans reaching the French ports of Calais and Dunkirk. The 22-mile long defensive line was chosen at the Yser because the river and canal system could be flooded to create a barrier that might be defended. The plan was successful and the front was “stabilized”. As we now know, millions of lives were lost over the coming years with very little movement of that battle line.

52. Where Spirit landed in 2004 : MARS
NASA’s Curiosity rover is the fourth in a series of unmanned surface rovers that NASA has sent to Mars. Previous rovers are the Sojourner rover (1997), Spirit rover (2004-2010) and Opportunity rover (2004-present). Curiosity rover was launched in November of 2011, and landed on Mars in August 2012 after having travelled 350 million miles. After that long journey, Curiosity landed just 1½ miles from its targeted touchdown spot.