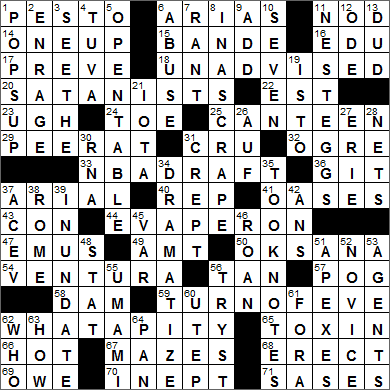 CROSSWORD SETTER: David Woolf
THEME: Turn of Events … Happy St. Paddy’s Day, everyone! In today’s grid we have four TURNS OF EVENTS, four incidents where the letter sequence “EVENT” changes direction (across to down, or down to across) in the middle of an answer:

59A. Unforeseen development … or a feature seen four times in this puzzle’s answers? : TURN OF EVE/NTS

Today’s Wiki-est, Amazonian Googlies
Across
1. Sauce for linguine : PESTO
The term “pesto” applies to anything made by pounding. What we tend to know as “pesto” sauce is more properly called “pesto alla genovese”, pesto from Genoa in northern Italy. I love, love pesto sauce …

Linguine is a type of pasta that is similar to spaghetti, except that in cross-section linguine is elliptical whereas spaghetti is round. The correct name for the dish is “linguine” meaning “little tongues” in Italian. That said, the misspelling “linguini” is given in some dictionaries as an acceptable Americanized variant..

15. Home invasion, in police shorthand : B AND E
Breaking and entering (B&E)

16. Ending for all Facebook logins until late ’05 : EDU
Prior to 2005, what we know today as Facebook was known as “The Facebook”. All of the users of TheFacebook.com back then were university students. The name changed to Facebook in 2005 when the company purchased the doman name Facebook.com, for $200,000.

Winter Park, Florida was founded as a resort community in the late 1800s.

31. Vin classification : CRU
“Cru” is a term used in the French wine industry that means “growth place”. So, “cru” is the name of the location where the grapes are grown, as opposed to the name of a specific vineyard. The terms “premier cru” and “grand cru” are also used, but the usage depends on the specific wine region. Generally it is a classification awarded to specific vineyards denoting their potential for producing great wines. “Grand cru” is reserved for the very best vineyards, with “premier cru” the level just below.

37. Sans-serif typeface : ARIAL
Serifs are details on the ends of characters in some typefaces. Typefaces without serifs are known as sans-serif, using the French word “sans” meaning “without” and “serif” from the Dutch “schreef” meaning “line”. Some people say that serif fonts are easier to read on paper, whereas sans-serif fonts work better on a computer screen. I’m not so sure though …

40. Part of a gym routine : REP
Our word “gymnasium” comes from the Greek “gymnasion” meaning “public place where exercise is taken”. The Greek term comes from “gymnos” meaning “naked”, as that physical training was usually done unclothed.

41. Many mirages : OASES
A mirage occurs when light rays are bent by passing say from cold air to warmer air. The most often cited mirage is a “lake” seen in a desert, which is actually the blue of the sky and not water at all. The word “mirage” comes to us via French from the Latin “mirare” meaning “to look at in wonder”. “Mirage” has the same root as our words “admire” and “mirror”.

44. 1996 Madonna starring role : EVA PERON
“Evita” was the follow up musical to “Jesus Christ Superstar” for Andrew Lloyd Webber and Tim Rice. Both of these works were originally released as album musicals, and very successful ones at that (I remember buying them when they first came out). “Evita” was made into a film in 1996, with Madonna playing the title role and Welsh actor Jonathan Pryce playing her husband Juan Perón.

47. Birds with deep drumming calls : EMUS
The large flightless birds called emus make sounds by manipulating inflatable necks sacs. The sac is about a foot long, has a thin wall and allows the bird to emit a booming sound. The type of sound emitted is the easiest way to differentiate between male and female emus.

50. Figure skater Baiul : OKSANA
Oksana Baiul is a Ukrainian figure skater, the 1994 Olympic champion. Baiul had a rough start to her life as her father deserted her and her mother when she was just two years old, and then her mother died when she was thirteen. Her grandparents had died earlier so she was left as an orphan, sleeping on a cot in her hometown ice rink.

57. 1990s fad game piece : POG
The game of pogs was originally played with bottle caps from POG fruit juice. The juice was named for its constituents, passion fruit, orange and guava.

58. China’s Three Gorges ___ : DAM
The Three Gorges region along the Yangtze River in China is known for its spectacular scenery. The area is attracting a lot of attention in recent years because of a recently completed hydroelectric dam that is changing the ecology and appearance of the land both upriver and downriver. The dam itself is the biggest electricity-generating plant in the world, with a total capacity of 22.5 GW.

71. Certain encls. : SASES
A self-addressed stamped envelope (SASE) might be an enclosure (encl.) sent with a letter.

Down
4. Constituent part of Russia bordering Mongolia : TUVA
Tuva is a central Asian republic that is a federal subject of Russia. The capital of Tuva is the city of Kyzyl.

6. Heckling, e.g. : ABUSE
The original use of the verb “to heckle” was to mean questioning severely, and for many years was associated with the public questioning of parliamentary candidates in Scotland. In more recent times, the meaning has evolved into questioning that is less polite and that is directed at standup comics.

10. Hearst monthly : SEVENTEEN
“Seventeen” is a monthly magazine aimed at teenage girls that was first issued in 1944.

11. Some caches : NEST EGGS
A “cache” is a secret supply. We imported the term into English from French Canadian trappers in the 17th century. Back then, “cache” was as slang term for a “hiding place for stores”, derived from the French verb “cacher” meaning “to hide”.

12. Allen Ginsberg’s “Plutonian ___” : ODE
“Plutonian Ode” is a 1978 poem by Beat poet Allen Ginsberg. The work is a protest against the arms race between the superpowers. Philip Glass wrote his 2002 “Symphony No. 6” using the poem as inspiration, and indeed including parts of the poem to be sung by a soprano soloist. As such, the piece is often referred to as the “Plutonian Ode Symphony”.

21. Bit : IOTA
Iota is the ninth letter in the Greek alphabet. We use the word “iota” to portray something very small, as it is the smallest of all Greek letters.

26. “___ Wiedersehen” : AUF
“Auf Wiedersehen” is German for “goodbye”, literally translating as “till we see each other again”.

27. City on a lake of the same name : ERIE
Erie is a city in the very north of Pennsylvania, right on the southern shore of Lake Erie. The city takes its name from the Erie Native American tribe that resided in the area.

28. Barclays Center squad : NETS
The NBA’s Brooklyn Nets until relatively recently were the New Jersey Nets, based in Newark. Prior to 1977, the team was known as the New York Nets and played in various locations on Long Island. Ten years earlier, the Nets were called the New Jersey Americans and were headquartered in Teaneck, New Jersey.

The Barclays Center is an arena in Brooklyn, New York that is home to the Brooklyn Nets of the NBA, and to the New York Islanders of the NHL. Barclays ending up paying over $200 million for the naming rights, even though the London-based banking group has no retail banks or ATMs in the US.

30. Essential macromolecule : RNA
Ribonucleic Acid (RNA) is an essential catalyst in the manufacture of proteins in the body. The genetic code in DNA determines the sequence of amino acids that make up each protein. That sequence is read in DNA by messenger RNA, and amino acids are delivered for protein manufacture in the correct sequence by what is called transfer RNA. The amino acids are then formed into proteins by ribosomal RNA.

38. 1960 Olympics host : ROME
The 1960 Summer Olympic Games were hosted by Rome. The Italian capital had been scheduled to host the Summer Games back in 1908. Rome had to decline following the 1906 eruption of Mount Vesuvius, with the government instead diverting funds to reconstruct the devastated city of Naples.

46. Horse color : ROAN
A roan horse has an even mixture of white and colored hairs on the body with the head, lower legs, mane and tail having a more solid color.

48. “Right away” : STAT
The exact etymology of “stat”, a term meaning “immediately” in the medical profession, seems to have been lost in the mists of time. It probably comes from the Latin “statim” meaning “to a standstill, immediately”. A blog reader has helpfully suggested that the term may also come from the world of laboratory analysis, where the acronym STAT stands for “short turn-around time”.

53. F.B.I. employees : AGENTS
What we know today as the FBI was set up in 1908 as the BOI, the Bureau of Investigation. The name was changed to the Federal Bureau of Investigation in 1935. The Bureau was set up at the behest of President Theodore Roosevelt. President Roosevelt was largely moved to do so after the 1901 assassination of President McKinley, as there was a perception that anarchists were threatening law and order. The FBI’s motto uses the organization’s initialism, and is “Fidelity, Bravery, Integrity”.

55. Savory quality : UMAMI
Umami is one of the five basic tastes, along with sweet, sour, bitter and salty. “Umami” is a Japanese word used to describe “a pleasant savory taste”. Umami was proposed as a basic taste in 1908, but it wasn’t until 1985 that the scientific community finally accepted it as such.

56. Plot point in many a soap opera : TRYST
In its most general sense, a tryst is a meeting at an agreed time and place. More usually we consider a tryst to be a prearranged meeting between lovers. The term comes from the Old French “triste”, a waiting place designated when hunting.

60. U.S. college whose campus is less than 1,000 ft. from Ciudad Juárez : UTEP
The University of Texas at El Paso (UTEP) was founded in 1914, originally as the Texas State School of Mines and Metallurgy. To this day there is a mine shaft on the campus, and the mascot of the school’s sports teams is Paydirt Pete, a prospector from the mining industry. The teams are also known as the UTEP Miners and Lady Miners.

The Mexican city sitting across the border from El Paso is more correctly called Ciudad Juárez. Juárez used to be called El Paso del Norte (the North Pass). It was to be the younger settlement on the northern side of the Rio Grande which would retain the “El Paso” name.

61. Meeting places : FORA
The Roman forum was the public space in the middle of a city, taking it’s name from the Latin word “forum” meaning “marketplace, town square”.