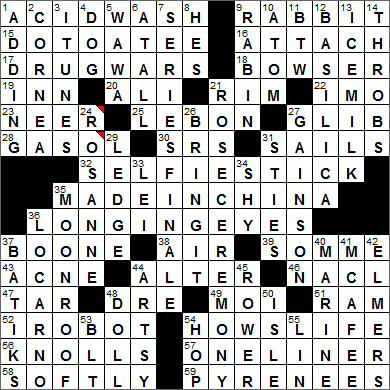 Today’s Wiki-est, Amazonian Googlies
Across
1. Make look old, in a way : ACID WASH
One might acid wash jeans, for example, to make them look older.

9. Whiz at multiplication? : RABBIT
To “breed like rabbits” is to have too many children too quickly, according to the idiom.

17. Subject of the 2015 film “Sicario” : DRUG WARS
“Sicario” is a 2015 movie, a crime thriller starring Emily Blunt, Benicio del Toro and Josh Brolin. Blunt stars as an idealistic FBI agent who is part of US government task force charged with bringing down a Mexican drug cartel. The word “sicario” is Spanish for “hitman”.

Success is counted sweetest
By those who ne’er succeed.
To comprehend a nectar
Requires sorest need.

As he defeated – dying –
On whose forbidden ear
The distant strains of triumph
Burst agonized and clear!

25. Duran Duran frontman Simon : LE BON
Simon Le Bon is the lead singer with the English band Duran Duran. Le Bon is a passionate sailor and garnered a lot of attention when his yacht lost its keel in the 1985 Fastnet race. Before Le Bon and his crew could be rescued, they spent 40 minutes trapped underwater inside the hull. The incident didn’t deter Le Bon from sailing though, and not long after he came third in the 1985-1986 Whitbread Round the World Race.

28. Five-time N.B.A. All-Star Pau ___ : GASOL
Pau Gasol is a Spanish basketball player who now plays for the Chicago Bulls. Pau’s younger brother is Marc, who plays for the Memphis Grizzlies.

31. Clipper features : SAILS
A clipper was a sailing ship, commonly crossing the seas in the 19th century. Clippers were built for speed, so were narrow and had less room for carrying freight than many vessels used in trade. They were developed largely due to the demand for speedy delivery of fresh tea from China to Europe. The name comes from the term “to clip” meaning to move swiftly (as in “at a clip”). Perhaps the most famous clipper ship is the Cutty Sark built in 1869, the last clipper to be built as a merchant vessel. The Cutty Sark owes her fame to the fact that she is on display as a museum ship in a dry dock in Greenwich in London.

39. W.W. I battle site at which the tank was introduced : SOMME
The Somme is a river in the north of France. The name “Somme” comes from a Celtic word meaning “tranquility”. Paradoxically, the Somme is remembered as the site of a devastating WWI battle. The river separated British and French forces from the German army from July to November 1916. By the end of the battle, over one million soldiers had been wounded or killed.

46. Deicing formula : NACL
Sodium chloride (NaCl, common salt) is an ionic compound, a crystal lattice made up of large chloride (Cl) ions in a cubic structure, with smaller sodium (Na) ions in between the chlorides.

48. Big name in headphones : DRE
Beats by Dre is a brand of audio products made by Beats Electronics, a company that was co-founded by rapper Dr. Dre. Apple bought Beats for $3 billion in 2014, the largest acquisition by far in the company’s history.

52. 2004 film with the tagline “One man saw it coming” : I, ROBOT
“I, Robot” is an interesting 2004 science fiction film starring Will Smith that is loosely based on the excellent collection of short stories of the same name by Isaac Asimov.

58. Piano : SOFTLY
The term “piano” on a musical score is direction to play “softly”.

59. Locale of the ancient kingdom of Navarre : PYRENEES
Navarre is an autonomous community in northern Spain that shares a border with France. The capital of Navarre is Pamplona, the city famous for the “running of the bulls”.

Down
2. Lens cover : CORNEA
The cornea is the transparent part of the eye in the front, covering the iris and the pupil. Even though the cornea is not part of the lens it acts as a lens, and in fact does most of the work focusing light coming in through the eye. The cornea is in effect a fixed-focus lens passing on light to the variable-focus lens that is inside the eye.

3. Its icon contains a pair of quavers : ITUNES
iTunes is a very, very successful software application from Apple. It’s basically a media player that works on platforms like the iPad, iPhone and iPod. Of course it connects seamlessly to the iTunes store, where you can spend all kinds of money.

What are known as eighth notes in the US and Canada, are called quavers in other English-speaking countries around the world.

6. Even a smidgen : AT ALL
Our word “smidgen”, meaning a small amount, might come from the Scots word “smitch” that means the same thing or “a small insignificant person”.

8. Drones and such : HES
Drone bees and ants are fertile males of the species, whose sole role in life seems to be to mate with a queen.

9. ___ Square, center of Tel Aviv : RABIN
Rabin Square in the center of Tel Aviv was known as Kings of Israel Square prior to 1995. The change in name was made in honor of Prime Minister Yitzhak Rabin, who was assassinated in that year in the very same square.

12. Transept setting : BASILICA
In its modern usage, the term “basilica” applies to a Roman Catholic church that has been given special ceremonial rights by the Pope.

A transept is a transverse section that crosses the main body of a building. Transepts are important features in many Gothic Christian churches, which often have a cross-shaped floorplan.

21. “The Bachelor” high point : ROSE CEREMONY
“The Bachelor” is a US reality television show that first aired in 2002 on ABC. I’ve avoided this one like the plague …

24. Cash in the music business : ROSANNE
Rosanne Cash is the eldest daughter of Johnny Cash, and is a successful singer in her own right.

33. Redolent ring : LEI
“Lei” is the Hawaiian word for “garland, wreath”, although in more general terms a “lei” is any series of objects strung together as an adornment for the body.

Something that is redolent is aromatic, emits a fragrance. Redolent is an Old French word.

36. Swiss treaty city : LOCARNO
Locarno is a town in the southern, Italian-speaking part of Switzerland. Locarno is a resort town at the foot of the Alps, on the shore of Lake Maggiore.

37. Dyes with wax : BATIKS
Genuine batik cloth is produced by applying wax to the parts of the cloth that are not to be dyed. After the cloth has been dyed, it is dried and then dipped in solvent that dissolves the wax.

41. Big name in computer security : MCAFEE
McAfee is a security software company now known as Intel Security Group. Purchased by Intel in 2011, the company was founded by John McAfee in 1987. John McAfee might be described as a “bit of a character”. He lived in Belize for several years, before being forced out of the country. The word is that McAfee is planning on running for US president in 2016.

42. Kindergarten brand : ELMER’S
Elsie the Cow is the mascot of the Borden Company. Elsie first appeared at the New York World’s Fair in 1939, introduced to symbolize the perfect dairy product. Elsie was also given a husband named Elmer the Bull. Elmer eventually moved over to the chemical division of Borden where he gave his name to Elmer’s Glue.

45. Shell occupant : ROWER
A scull is a boat used for competitive rowing. The main hull of the boat is often referred to as a shell. Crew members who row the boat can be referred to as “oars”.

48. Filmdom’s Chucky, for one : DOLL
Chucky is the nickname of Charles Lee Ray, the main character in the “Chucky” (or “Child’s Play”) series of horror movies. There’s no way that I will watch any of those films, no way at all …

50. Man, but not woman : ISLE
The Isle of Man is a large island located in the middle of the Irish Sea between Great Britain and Ireland. I used to spend a lot of time there in my youth, and a very interesting place it is indeed. The Isle of Man is classed as a British Crown Dependency and isn’t part of the United Kingdom at all. It is self-governing and has its own parliament called the Tynwald. The Tynwald was created in AD 979 and is arguably the oldest continuously-running parliament in the world. The inhabitants of the island speak English, although they do have their own language as well called Manx, which is very similar to Irish Gaeilge and Scottish Gaelic. And then there are those Manx cats, the ones without any tails. I’ve seen lots of them, and can attest that they are indeed found all over the island.

53. Counter letters : BLT
The BLT (bacon, lettuce and tomato) is the second most popular sandwich in the US, after the plain old ham sandwich.