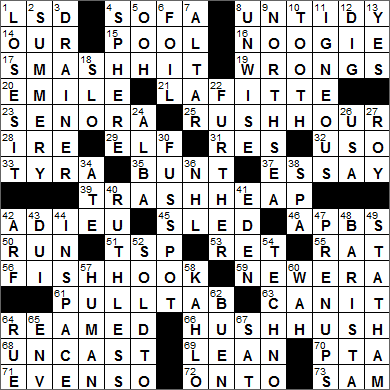 Today’s Wiki-est, Amazonian Googlies
Across
1. Psychedelic drug : LSD
LSD (colloquially known as “acid”) is short for lysergic acid diethylamide. A Swiss chemist called Albert Hofmann first synthesized LSD in 1938 in a research project looking for medically efficacious ergot alkaloids. It wasn’t until some five years later when Hofmann ingested some of the drug accidentally that its psychedelic properties were discovered. Trippy, man …

4. Davenport : SOFA
The name Davenport, when used to mean a sofa, is one of those generic terms that evolved for an item from the name of a prominent manufacturer. The long gone Davenport Company sold a lot of furniture in the midwest and upstate New York, so the term is especially common in that part of the country.

15. Billiards game : POOL
The more correct name for the game of pool is pocket billiards. The name “pool” arose after pocket billiards became a common feature in “pool halls”, places where gamblers “pooled” their money to bet on horse races.

16. Knuckle rub : NOOGIE
A “noogie” is that childish move where someone rubs his (and it’s always a guy!) knuckles into a person’s head to create a little soreness.

20. Author Zola : EMILE
The most famous work of French writer Émile Zola is his 1898 open letter “J’Accuse!” written to then French president Félix Faure. The letter was published on the front page of a leading Paris newspaper, and accused the government of anti-Semitism in its handling of the trial of Captain Alfred Dreyfus. Dreyfus was a Jewish military officer in the French army, falsely accused and convicted of spying for Germany. Even after the error was discovered, the government refused to back down and let Dreyfus rot away on Devil’s Island rather than admit to the mistake. It wasn’t until 1906, 12 years after the wrongful conviction, that Dreyfus was freed and reinstated, largely due to the advocacy of Emile Zola.

21. Jean ___, old-time French pirate with a base in New Orleans : LAFITTE
Jean Lafitte was a French pirate who plied his trade in the Gulf of Mexico. Lafitte helped Andrew Jackson in the Battle of New Orleans towards the end of the War of 1812, in return for a pardon for his pirating activities.

23. Lady of Lima : SENORA
Lima is the capital city of Peru. Lima was founded in 1535 by the Spanish conquistador Francisco Pizarro, who named it “la Ciudad de los Reyes” (the City of Kings). He chose this name because the decision to found the city was made on January 6th, the feast of the Epiphany that commemorates the visit of the three kings to Jesus in Bethlehem.

32. G.I. entertainers : USO
The United Service Organization (USO) was founded in 1941 at the request of FDR “to handle the on-leave recreation of the men in the armed forces”. A USO tour is undertaken by a troupe of entertainers, many of whom are big-name celebrities. A USO tour usually includes troop locations in combat zones.

35. Baseball hit that doesn’t go far : BUNT
“To bunt” in baseball is to barely hit the ball, just enough to have it roll slowly in front of the infielders.

45. Luge, e.g. : SLED
A luge is a small sled used by one or two people, on which one lies face up and feet first. The luge can be compared to the skeleton, a sled for only one person and on which the rider lies face down and goes down the hill head-first. Yikes!

46. “Be on the lookout” messages, for short : APBS
An All Points Bulletin (APB) is a broadcast from one US law enforcement agency to another.

61. Beer can opener : PULL TAB
The oldest method of opening a can with a device included in the can’s design is the pull tab or ring pull, invented in Canada in 1956. The design was long-lived but it had its problems, so the world heaved a sigh of relief with the invention of the stay-on-tab in 1975. The new design led to less injuries and eliminated all those used pull tabs that littered the streets.

64. Criticized angrily, with “out” : REAMED
I must admit that I find the slang term “to ream out”, with its meaning “to scold harshly”, to be quite distasteful. The usage of the word as a reprimand dates back to about 1950.

73. Oscar- and Grammy-winning singer Smith : SAM
Sam Smith is a singer from London. I think that the only thing I’ve heard of his is the theme song from the 2015 James Bond movie “Spectre”, which is called “Writing’s on the Wall”.

Down
1. Goes bonkers : LOSES IT
The word “bonkers” meaning “crazy” originated in the fifties. The term might come from navy slang meaning “slightly drunk”, behaving as though one received a “bonk” on the head.

6. Wrap for leftover food : FOIL
Before thin sheets of aluminum metal were available, thin sheets of tin were used in various applications. Tin foil isn’t a great choice for wrapping food though, as it imparts a tinny taste. On the other side of the pond, aluminum foil has a different name. No, it’s not just the different spelling of aluminum (“aluminium”). We still call it “tin foil”. You see, we live in the past …

9. Body of water between Denmark and Scotland : NORTH SEA
The North Sea is an offshoot of the Atlantic Ocean that is located between Britain and Scandinavia.

11. Like granite and basalt : IGNEOUS
There are three main types of rock: igneous, sedimentary and metamorphic. Igneous rock forms when magma or lava cools.

24. Jessica of “Sin City” : ALBA
Actress Jessica Alba got her big break when she was cast in the Fox science fiction show “Dark Angel”. Alba had a tough life growing up as she spent a lot of time in hospital and so found it difficult to develop friendships. As a youngster she twice had a collapsed lung, frequently caught pneumonia, suffered from asthma, had a ruptured appendix and a tonsillar cyst. On top of all that she acknowledges that she suffered from obsessive-compulsive disorder as a child. It seems that she has really turned her life around …

26. ___ Today : USA
The title of widest circulation of any American newspaper is an honor competed for by “The Wall Street Journal” and “USA Today”, with each paper selling about 2 million copies each day (including online subscribers). “USA Today” was launched in 1982.

27. Cowboy Rogers : ROY
Cowboy actor and singer Roy Rogers’ real name was Leonard Franklin Slye, and his nickname was “King of the Cowboys”. Roy Rogers married Dale Evans in 1947. Evans’ nickname was “Queen of the West”.

36. Org. in which Ducks play with pucks : NHL
The Walt Disney Company founded the Mighty Ducks of Anaheim hockey team in 1993, with the franchise’s name being a nod to the 1992 Disney movie called “The Mighty Ducks”. The name was changed to the Anaheim Ducks when Disney sold the team before the 2006-2007 season.

38. Relaxing getaway : SPA
The word “spa” migrated into English from Belgium, as Spa is the name of a municipality in the east of the country that is famous for its healing hot springs. The name “Spa” comes from the Walloon word “espa” meaning “spring, fountain”.

41. Garden with forbidden fruit : EDEN
In the Christian tradition, the “fall of man” took place in the Garden of Eden when Adam and Eve succumbed to the temptation of eating the fruit from the tree of knowledge of good and evil, against the bidding of God. As a result, Adam and Eve were banished from Eden to prevent them becoming immortal by eating from the tree of life. The first humans had transitioned from a state of innocent obedience to a state of guilty disobedience.

43. Busted boozer’s offense, for short : DUI
In some states, there is no longer a legal difference between a DWI (Driving While Intoxicated) and a DUI (Driving Under the Influence). Other states retain that difference, so that by definition a DUI is a lesser offence than a DWI.

44. Where “no one can hear you scream,” per “Alien” : IN SPACE
The 1979 sci-fi horror movie “Alien” was the big break for Sigourney Weaver as it was her first lead role, and her character ended up as central to a whole set of sequels. The movie’s producers made a very conscious decision to cast a female in the lead role so as to have the film stand out in the male-dominated genre of science fiction. Famously, the film was publicized with the tagline “In space no one can hear you scream”.

48. Coffee shop employee : BARISTA
The person who serves coffee in a coffee shop is often called a “barista”. “Barista” is the Italian for “bartender”.

49. Action star Jason : STATHAM
Jason Statham is an actor from England best known for playing tough characters on screen. I liked him in the remake of “The Italian Job” from 2003.

54. Electronic music genre : TECHNO
Techno is a type of electronic dance music that originated in Detroit in the eighties. Techno involves a heavy beat in common time, and what seems to be a lot of repetition. Not for me …

57. What “to err is” : HUMAN
Alexander Pope’s 1709 poem “An Essay on Criticism” is the source of at least three well-known quotations:

58. Artist Frida : KAHLO
Frida Kahlo was a Mexican painter, famous for her self-portraits. She was married to the equally famous artist Diego Rivera. Kahlo was portrayed by the actress Salma Hayek in a film about her colorful life called “Frida” released in 2002.

60. “Do ___ Diddy Diddy” (1964 #1 hit) : WAH
“Do Wah Diddy Diddy” is song that was originally recorded by an American group called the Exciters in 1963. The more famous cover version was released the following year by British group Manfred Mann. It’s a great, great song …