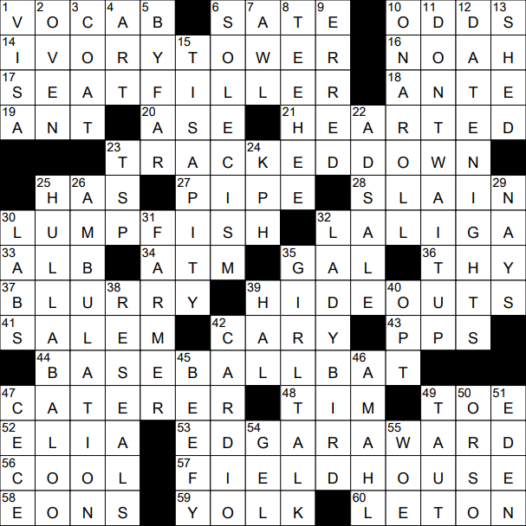 16 TV host who was the subject of the documentary “You Laugh but It’s True” : NOAH

32 What Real Madrid and F.C. Barcelona play in : LA LIGA

Real Madrid is a professional soccer team based in Madrid, Spain. The team name translates as “Royal Madrid”. Real Madrid is often ranked as the world’s most valuable soccer team, and is one of the most widely supported sports teams on the planet.

34 Many take notes using one : ATM

41 City name on both the East and West Coast : SALEM

59 Something that may be broken in a kitchen : YOLK

1 Checked item for some travelers : VISA

4 Linocuts and such : ART

The printmaking technique of “linocut” is similar to woodcut, but with a sheet of linoleum used instead of bare wood for the relief design. Linoleum was introduced as a floor covering in the 1860s, but the use of linoleum for printing only dates back to the early 1900s.

Lino (short for “linoleum”) was originally made by coating canvas with solidified linseed oil. The product’s inventor, Englishman Frederick Walton, gave it the name “linoleum” from “linum” and “oleum”, the Latin for “linen” and “oil”.

32 Loser to “The Shape of Water” for Best Picture : LADY BIRD

“The Shape of Water” is a 2017 movie that is described as a “romantic monster” film, and so is in a pretty unique genre, I’d say. It was directed by Guillermo del Toro, who also co-wrote the script. It’s all about a mute young lady working in a government laboratory and falling in love with a humanoid amphibian who is held captive there. Not my cup of tea …

Composer Gian Carlo Menotti’s “Amahl and the Night Visitors” has a special place in the repertoire, in that it is the first opera specifically composed for American television. “Amahl and the Night Visitors” was commissioned by NBC and had its debut at the NBC studios in Rockefeller Center on Christmas Eve, 1951. In today’s world of commercially-driven television, I can’t imagine a network commissioning a classical work …

CeCe Peniston is a recording artist noted for the prevalence of her music in dance clubs. Her most successful song is “Finally”, released in 1991. Supposedly Peniston wrote the lyrics for “Finally” while she was still at school, and during a chemistry class!

The city of Eden Prairie lies just outside downtown Minneapolis. If you live there, congratulations! Eden Prairie was ranked by “Money Magazine” in 2010 as the best place to live in America.