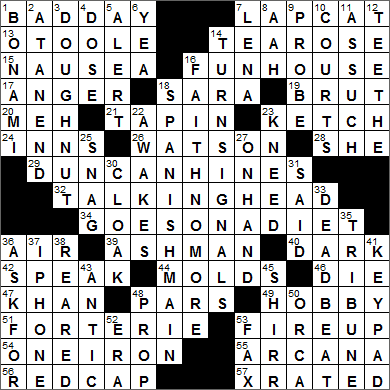 Today’s Wiki-est, Amazonian Googlies
Across
13. Best Actor Oscar nominee for “The Lion in Winter” : O’TOOLE
Irish actor Peter O’Toole got his big break in movies when he played the title role in the 1962 epic film “Lawrence of Arabia”. But my favorite of O’Toole’s movies is much lighter fare, namely “How to Steal a Million” in which he stars opposite Audrey Hepburn.

“The Lion in Winter” is a play by James Goldman that was first staged in 1966 on Broadway. The two lead characters in the piece are King Henry II of England and his wife Eleanor of Aquitaine. The play was adapted into a very successful movie in 1968 starring Peter O’Toole and Katharine Hepburn. There was also a 2003 television movie adaption that I’d like to see, starring Patrick Stewart and Glenn Close.

14. Oriental blossom : TEA ROSE
The first tea roses were so called because they had a fragrance reminiscent of Chinese black tea.

15. Sartre’s first novel : NAUSEA
Jean-Paul Sartre was a leading French philosopher, as well as a writer and political activist. He also served with the French army during WWII and spent nine months as a prisoner of war having been captured by German troops. Sartre was one of the few people to have been awarded a Nobel Prize and to have then refused to accept it. He was named winner of the prize for Literature in 1964, for his first novel “Nausea”. Before his win, Sartre knew that his name was on the list of nominees so he wrote to the Nobel Institute and asked to be withdrawn from consideration. The letter somehow went unread, so he found himself having to refuse the award after he had been selected.

16. What you might get a distorted picture from? : FUN HOUSE
A fun house often includes curved mirrors in which one can see a distorted image of oneself.

18. Detective fiction author Paretsky : SARA
Sara Paretsky is an American author of detective fiction. Paretsky’s most famous character is a female private investigator called V.I. Warshawski. Warshawski was played by Kathleen Turner in a big screen adaptation of one of her stories in 1991.

19. Fragrance created by Fabergé : BRUT
Brut is a brand of men’s grooming products made by Fabergé since 1964. The folks marketing Brut use the slogan “the Essence of Man”.

20. Scoring low on the excite-o-meter : MEH
“Meh!” is one of those terms unfamiliar to me outside of crosswords. It is a modern colloquialism meaning “I’m not great, but not bad”. A friendly reader of this blog tells me that the usage of the term increased dramatically after it started to appear regularly in “The Simpsons” starting in the early nineties.

23. Fore-and-aft-rigged vessel : KETCH
A ketch is a sailboat with two masts. The most forward mast is the mainmast, and is the taller of the two. The smaller mast is further aft, and is known as the mizzen mast.

26. Fictional biographer : WATSON
In the marvelous Sherlock Holmes stories by Sir Arthur Conan Doyle, Holmes’ sidekick Dr. Watson is referred to only by his family name, except for two occasions when it is revealed that his first name is John. However, in a third and final mention, Dr. Watson is called “James” by his wife, apparently a lapse in memory on the part of the author.

28. “___ Will Be Loved” (Maroon 5 hit) : SHE
Maroon 5 is a rock band from LA. Most of the band members met in high school where they formed a garage band called Kara’s Flowers in 1995. The band reformed as Maroon 5 in 2001 and were a big hit almost straight away. Personally, I’ve never heard of them outside of crosswords …

29. Restaurant critic who lent his name to a brand at the supermarket : DUNCAN HINES
Duncan Hines was a restaurant critic from Bowling Green, Kentucky. HInes had been working for many years as a traveling salesman and pulled together a list of ratings for restaurants that he visited all across the country, initially as a resource for friends. He later published the list in book form, thereby finding his true calling. Some years later, Hines sold the rights to use his name on food-related businesses, which is how we ended up with the Duncan Hines brand.

32. Show authority? : TALKING HEAD
“Talking head” is TV slang for a participant in a talk show. The term arises from the closeup shot of the person contributing to the discussion.

46. Rolled item : DIE
The numbers on dice are arranged so that the opposite faces add up to seven. Given this arrangement, the numbers 1, 2 and 3 all meet at a common vertex. There are two ways of arranging the 1, 2 and 3 around the common vertex, a so called right-handed die (clockwise 1-2-3) or a left-handed die (counterclockwise 1-2-3). Traditionally, dice used in Western cultures are right-handed, whereas Chinese dice are left-handed. Quite interesting …

51. Ontario town across from Buffalo : FORT ERIE
The original Fort Erie was built by the British in 1764. The current structure can be visited today and is located in the province of Ontario, just across the Niagara River from the city of Buffalo, New York.

54. Club that “even God can’t hit,” according to Lee Trevino : ONE IRON
Lee Trevino is an American golfer of Mexican descent, and so has the nicknames “The Merry Mex” and “Supermex”. He is well known for his great sense of humor and for playing pranks on the golf course. For many years, Trevino wore a Band-Aid on his arm while playing, covering the tattoo with the name of his ex-wife.

56. Worker at a station : REDCAP
“Redcap” is a term used for a railroad station porter here in North America. That term comes from the fact that redcaps wear red caps!

Down
1. “Hasn’t scratched yet!” product : BON AMI
Bon Ami cleanser was introduced just a few years after Bon Ami soap went to market in 1886. The cleanser was marketed by emphasising its “non-scratch” properties. The label showed a chick coming out of an egg, the idea being that a newly hatched chick hasn’t yet scratched the ground looking for worms and insects.

7. Horne of “The Lady and Her Music” : LENA
Lena Horne was an American jazz singer, actress, dancer and civil rights activist. Horne started out her career as a nightclub singer and then began to get some meaty acting roles in Hollywood. However, she ended up on the blacklist during the McCarthy Era for expressing left wing political views. One of Horne’s starring roles was in the 1943 movie “Stormy Weather” for which she also performed the title song.

16. Grammy-nominated rock band for “Epic” : FAITH NO MORE
Faith No More is a rock band that formed in San Francisco in 1979 as Sharp Young Men, and then Faith No Man. No interest …

18. Setting of many pirate stories : SPANISH MAIN
When one thinks of the word “main” in the context of the sea, the Spanish Main usually comes to mind. Indeed, the use of the more general term “main”, meaning the sea, originates from the more specific “Spanish Main”. “Spanish Main” originally referred to land and not water, as it was the name given to the mainland coast around the Caribbean Sea in the days of Spanish domination of the region.

25. Fly in the ointment : SNAG
Our expression “a fly in the ointment” is used when we come across some relatively minor snag that is a hindrance to completing something. We started using the expression in the 1700’s, and it refers to some lines in the Bible; Ecclesiastes 10:1:

Dead flies cause the ointment of the apothecary to send forth a stinking savour: so doth a little folly him that is in reputation for wisdom and honour.

35. Salt Lake City daily : TRIBUNE
“The Salt Lake Tribune” is the largest-circulation daily newspaper in Salt Lake City. Known locally as “The Trib”, it was founded in 1870 as the “Mormon Tribune”.

37. FaceTime device : IPHONE
FaceTime is an Apple videotelephony application. I guess it’s similar to Skype. Personally, I gave up on Skype and am now an avid user of Google Hangouts …

43. Shenanigan : ANTIC
I suppose one could be forgiven for thinking that “shenanigan” is an Irish term. Apparently the word is of uncertain derivation but was coined in San Francisco and Sacramento, California in the mid-1800s.

45. Gather together for stitching : SHIRR
Shirring is a decorative technique used when sewing a garment. I don’t understand it …

50. 1977 horror film set in Newfoundland : ORCA
“Orca” is a 1977 horror movie based on an Arthur Herzog novel of the same name. The film stars Richard Harris and Charlotte Rampling. “Orca” is often compared to “Jaws”, which was released just two years earlier. “Orca” tends to lose out in that comparison.

53. Listing on a Rolodex : FAX
The name Rolodex is short for “rolling index”, and applies to a device that was invented back in 1956. Even in today’s world that is run by computers, Rolodexes are still popular.