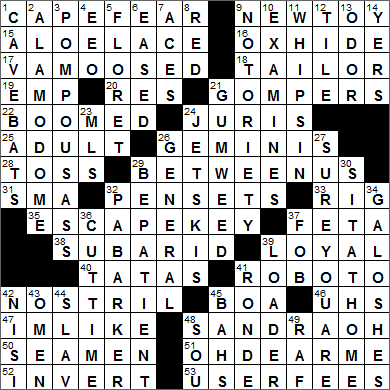 CROSSWORD SETTER: Paula Gamache
THEME: None
BILL BUTLER’S COMPLETION TIME: Did not finish (after 60 mins)
ANSWERS I MISSED: Too many to mention, all in the center of the grid

Today’s Wiki-est, Amazonian Googlies
Across
1. 1991 Scorsese/De Niro collaboration : CAPE FEAR
The 1991 film called “Cape Fear” is a Martin Scorsese remake of a 1962 movie of the same name. The 1991 version stars Robert De Niro and Nick Nolte, and there are also cameo appearances by Robert Mitchum and Gregory Peck who starred in the 1962 original.

15. Fragile fabric made from certain plant fibers : ALOE LACE
Aloe lace is quite unique. It is made from thread collected from the aloe leaves of agave plants growing on the Croatian island of Hvar in the Adriatic Sea.

17. Amscrayed : VAMOOSED
“To vamoose” is to “to leave”, and comes from the Spanish “vamos” meaning “let’s go”.

20. ___ nullius (no one’s property) : RES
The Latin term “res nullius” translates as “nobody’s property”. In law, it describes something that has no owner, and is often used when ownership has subsequently been claimed. An example is a wild animal, which is nobody’s property. However, if a hunter kills that animal, the body becomes the hunter’s property.

21. Pioneering labor leader Samuel : GOMPERS
Samuel Gompers was an influential labor union leader who founded and served as president of the American Federation of Labor (AFL).

25. Like NSFW links : ADULT
The abbreviation “NSFW” stands for “not safe/suitable for work”. It’s Internet slang used to describe online content that is best not viewed at work.

29. “Mum’s the word” : BETWEEN US
The phrase “mum’s the word” has been around since the early 1700s. “Mum” has been used to mean “silent” for centuries, the idea being that “mum” is the sound made when the lips are tightly sealed.

32. Cross collections, e.g. : PEN SETS
A. T. Cross is a company that claims to be the oldest manufacturer of fine pens. Cross was founded in 1846 in Providence, Rhode Island by one Richard Cross. Richard passed the company on to his son Alonzo T. Cross, who gave it the current name.

33. Roughneck’s workplace : RIG
A roughneck is a crew member on an oil rig.

35. It’s in the far northwest : ESCAPE KEY
The Escape (ESC) key on a PC keyboard is usually located in the top-left corner. The Escape key was introduced in 1960 by IBM programmer Bob Berner, originally to switch from one type of code to another. Nowadays, the Escape key is mainly used as “stop, quit, cancel, abort”.

37. Product of Greek culture? : FETA
Feta is a Greek cheese made from sheep’s milk, or a mixture of sheep’s and goat’s milk. The cheese is salted and cured in a brine solution for several months before it is eaten.

40. Splitting words : TATAS
An Englishman might say “tata” or “cheerio” instead of “goodbye”. Well, supposedly so!

45. Winner’s prize on “RuPaul’s Drag U” : BOA
RuPaul is a famous drag queen who has developed a diverse career beyond performing on stage. He works as an actor, model, author and a recording artist. Famously, RuPaul doesn’t mind whether one addresses him as “he” or as “she” …

48. “Grey’s Anatomy” actress with five straight Emmy nominations : SANDRA OH
The Canadian actress Sandra Oh is very much associated these days with the role of Dr. Cristina Yang on “Grey’s Anatomy”. However, my favorite of Oh’s performances are in the movies “Under the Tuscan Sun” and “Sideways”.

Down
1. They might spook spelunkers : CAVE BATS
Spelunking is an American term for caving, although the word has Latin roots (“spelunca” is the Latin for “cave”). The term originated in the 1940s in New England when it was adopted by a group of men who explored caves in the area.

12. Makeshift coaster, maybe : TILE
A “coaster” is a small mat or plate that goes under a glass or cup. Back in the late 1800s, the original coaster was a small drink stand that sat on a table. As the drink stand “coasted” around from guest-to-guest, it earned the name “coaster”.

14. Gen ___ (millennials) : YERS
“Generation Y” (Gen-Y) is alternative name for the Millennial Generation. Millennials were born after the “Gen-Xers”, from the early 1980s to the early 2000s.

21. Yellow-flowered plant producing a sticky resin : GUMWEED
Gumweed is the common name for the genus of plants Grindelia. One of the most common species is curlycup gumweed, a coastal scrub brush found in the western US.

The Chicago Fire is the name of the city’s professional soccer team. The Fire were founded in 1997, and are named for the Great Chicago Fire of 1871.

24. Noisy recreation vehicles : JET SKIS
“Jet Ski” is actually a brand name, owned by Kawasaki Heavy Industries of Japan. The generic term, not often used, is “personal watercraft”. Most people use the term “Jet Ski” generically, although “WaveRunner” is also popular. But that’s another brand name, owned by Yamaha.

32. His wife and sons were Depression-era criminals : PA BARKER
“Pa Barker” was George Barker, husband of the more famous “Ma Barker”. Ma Barker was the mother of several children who became notorious criminals in the early thirties. Collectively they ran what was known as the Barker Gang and plied their trade in the US Midwest.

37. Key-ring ornament : FOB
A fob is attached to another object to make access to it easier. And so a key fob is a chain attached to a key so that it can be retrieved easily. There are also watch fobs, and the pocket in a vest in which a watch can be placed is called a fob. In fact, the original use of the term “fob” was for a small pocket in which one could carry valuables.

42. Like some legal decrees : NISI
A decree nisi is a court order, one that only comes into force when certain specified conditions are met. At the point where the conditions are met, it becomes a decree absolute and is binding. “Nisi” is Latin for “unless”.

44. Pomeranian, e.g. : SLAV
The Slavic peoples are in the majority in communities covering over half of Europe. This large ethnic group is traditionally broken down into three smaller groups:

Pomerania is a region on the south shore of the Baltic Sea in Europe, divided between Germany and Poland.

48. Trifle : SOU
A sou is an old French coin. We use the term “sou” to mean “an almost worthless amount”.

49. Org. in the gulf war’s Operation Granby : RAF
The Royal Air Force (RAF) is the oldest independent air force in the world (i.e. the first air force to become independent of army or navy forces). The RAF was formed during WWI on 1 April 1918, a composite of two earlier forces, the Royal Flying Corps (part of the Army) and the Royal Naval Air Service. The RAF’s “finest hour” has to be the Battle of Britain when the vastly outnumbered British fighters fought off the might of the Luftwaffe causing Hitler to delay his plan to cross the English Channel. This outcome prompted Winston Churchill to utter the memorable words: