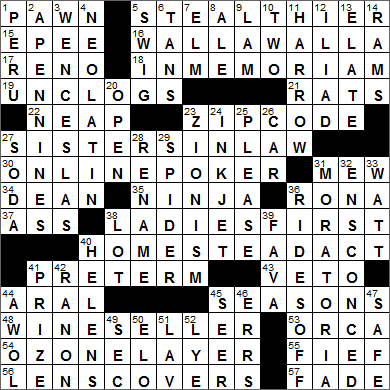 Today’s Wiki-est, Amazonian Googlies
Across
15. Dueler’s option : EPEE
The sword known as an épée has a three-sided blade. The épée is similar to a foil and sabre, both of which are also thrusting weapons. However, the foil and saber have rectangular cross-sections.

16. Washington city famous for its sweet onions : WALLA WALLA
The Washington city of Walla Walla used to be called Steptoeville, named for Edward Steptoe, an officer in the US Army who served in the Indian Wars. Walla Walla is a Native American phrase meaning “place of many waters”.

23. Number of letters : ZIP CODE
ZIP codes were introduced in 1963. The acronym ZIP stands for Zone Improvement Plan, a name indicating that mail travels more efficiently when the codes are included in the postal address.

35. Man in black, perhaps : NINJA
The ninjas were around in Japan at the time of the samurai, but were a very different type of warrior. The ninjas were covert operatives, specializing in the use of stealth to accomplish their missions. As they were a secretive cadre they took on a mystical reputation with the public, who believed they had the ability to become invisible or perhaps walk on water.

36. Novelist Jaffe : RONA
Rona Jaffe was an American novelist perhaps most famous for two of her books, “The Best of Everything” and “Mazes and Monsters”. “The Best of Everything” was published in 1958 and has been compared with the HBO television series “Sex and the City” as it depicts women in the working world. “Mazes and Monsters” was published in 1981 and explores a role-playing game similar to Dungeons & Dragons and the impact it has on players.

40. Lincoln signed it into law in 1862 : HOMESTEAD ACT
The Homestead Act of 1862 was the first in a series of federal laws that made small plots of farming land available for purchase to particular individuals at a reasonable price. The list of eligible applicants included women, African-Americans and immigrants. Enacted during the Civil War, the law specifically prohibited Southern slave-owners from purchasing the land, as well as anyone who had taken up arms against the US government.

43. “I forbid,” to Caesar : VETO
“Veto” comes directly from Latin and means “I forbid”. The word was used by tribunes of Ancient Rome to indicate that they opposed measures passed by the Senate.

44. ___ Sea (the “Sea of Islands”) : ARAL
The Aral Sea is a great example of how man can have a devastating effect on his environment. In the early sixties the Aral Sea covered 68,000 square miles of Central Asia. Soviet Union irrigation projects drained the lake to such an extent that today the total area is less than 7,000 square miles, with 90% of the lake now completely dry. The name “Aral Sea” roughly translates into “Sea of Islands”, as the sea was once home to over 1,100 islands. No more …

48. Cab supplier : WINE SELLER
The Cabernet Sauvignon grape has been around since the 17th century, and is the result of a chance crossing in southwestern France of the Cabernet franc and Sauvignon blanc grapes.

54. Chlorofluorocarbons damage it : OZONE LAYER
Chlorofluorocarbons (CFCs) are the propellants that were once used in aerosols. CFCs make their way up into the ozone layer and trigger a chain reaction that converts ozone (O3) into regular oxygen (O2). That conversion creates “holes” in the ozone layer. Regular O2 is good stuff, but we need O3 to absorb harmful UV radiation raining down on us. CFC is not good stuff …

55. Vassal’s reward : FIEF
Feudalism was a legal and military system that flourished in medieval Europe. Central to the system were the concepts of lords, vassals and fiefs. Lords would grant fiefs (land or rights) to vassals in exchange for allegiance and service.

56. Shot blockers : LENS COVERS
If you leave the cover on the lens, a photograph (shot) is blocked.

Down
1. Major quinoa exporter : PERU
Quinoa is a grain crop that is more closely related to beetroots and spinach that it is to cereals and grasses. Quinoa is mainly cultivated for its edible seeds, which are high in protein. The seeds are also gluten free, which seems to be a big deal these days. I do like my quinoa …

2. Boot hills? : APENNINES
The Apennines are the chain of mountains running the length of the Italian peninsula. The highest peak of the range is in the central Apennines and is named the Corno Grande, which rises to over 9,500 feet.

3. Carol king : WENCESLAS
“Good King Wenceslas” is one of my favorite Christmas carols. The main character in the carol is based on Saint Wenceslaus I, Duke of Bohemia. The lyrics were written by Englishman John Mason Neale and the tune is Scandinavian in origin. That’s quite a cultural mix, but it seems to work!

7. Classic vineyard tree : ELM
Elm trees have been planted in vineyards since the days of ancient Rome. The trees are maintained at a height of about ten feet, with the fast-growing lateral branches used to support the vines.

9. Fly the coop : LAM
To be “on the lam” is to be in flight, to have escaped from prison. “On the lam” is American slang that originated at the end of the 19th century. The word “lam” also means to “beat” or “thrash”, as in “lambaste”. So “on the lam” might derive from the phrase “to beat it, to scram”.

10. Smallest prime : TWO
A prime number is a number greater than 1 that can only be divided evenly by 1 and itself. There are still some unanswered questions involving prime numbers, perhaps most notably Goldbach’s Conjecture. This conjecture dates back to the 1740s and is assumed to be true, but has never been proven. It states that every even integer greater than 2 can be expressed as the sum of two prime numbers.

12. Old war story : ILIAD
“Iliad” is an epic poem by the Greek poet Homer, which tells the story of the siege of Ilium (also known as Troy) during the Trojan war.

14. Merlin Olsen’s team : RAMS
Merlin Olsen played in the NFL with the LA Rams. Olson was selected to the Pro Bowl 14 a record 14 times (shared with Bruce Matthews). After retiring from the game, his career continued to flourish. He worked as a sports broadcaster for many years, and then landed a major role on television’s “Little House on the Prairie”, playing Jonathan Garvey. In one episode, Garvey was to help coach a boy’s football team, so the writers gave Olsen’s character the tongue-in-cheek line “I don’t know nothin’ about football!” Olsen was also the commercial face of FTD florists for many years. Olson passed away in March 2010, aged 69.

23. “Der Judenstaat” movement : ZIONISM
The name “Zion” first turns up in the Book of Solomon in the Bible. Zion is commonly used to refer to Jerusalem, and sometimes the Biblical land of Israel.

“Der Judenstaat” is an 1896 pamphlet written by Theodor Herzl that is an important text of early Zionism. A central tenet of the work was the founding of an independent Jewish state at some time in 1900s.

24. Laser alternative : INKJET
Inkjet is a very accurate and descriptive name for the type of printer. Printing is done by shooting extremely fine jets of ink onto the page.

27. Tom Collins ingredient : SODA
The cocktail known as a Tom Collins is a mixture of gin, lemon juice, sugar and club soda. The original recipe was supposedly invented by a head waiter called John Collins, in a London hotel in the early 1800s. Called a John Collins back then, the drink’s name was changed around 1869 when a popular recipe specifically called for Old Tom gin.

32. Nestled : ENSCONCED
To ensconce oneself, one settles securely or comfortably somewhere. Back in the late 1500s, “to ensconse” meant “to cover with a fort” as a “sconse” is a small defensive fort or earthwork.

33. Steam engine pioneer James : WATT
James Watt was a Scottish inventor, a man who figured prominently in the Industrial Revolution in Britain largely due to the improvements he made to the fledgling steam engine. The SI unit of power is called the watt, named in his honor.

40. Mount St. ___ : HELENS
Only two volcanoes in the Cascade Range in the northwest have erupted in the 20th century: Mount St. Helens in 1980 and Mount Lassen in 1915. The last significant eruption of Mount Shasta, a third volcano in the Cascades, was about 200 years ago. The 1980 eruption of Mount St. Helens resulted in ash being deposited in eleven US states and 5 Canadian provinces.

42. Talked ad nauseam : RAN ON
To do something “ad nauseum” is to do so to a ridiculous degree, to the point of nausea. “Ad nauseum” is the Latin for “to sickness”.

44. Not on base? : AWOL
The Military Police (MPs) often track down personnel who go AWOL (absent without leave).

50. “Rockaria!” band, briefly : ELO
If you listen to the song “Rockaria” on the 1976 ELO album “A New World Record”, you’ll hear an “oops”. The introduction to the track features an opera singer who starts the vocals too early in the first take. The band decided to use that first take anyway, complete with the singer saying “oops”.

51. Place to go, for short : LAV
Our word “lavatory” originally referred to a washbasin, and comes from the Latin “lavatorium”, a place for washing. In the 1600s a “lavatory” came to mean a washroom, and in the 1920s a toilet.

52. Strong base : LYE
What we call “lye” is usually sodium hydroxide, although historically the term was used for potassium hydroxide. Lye has many uses, including to cure several foodstuffs. Lye can make olives less bitter, for example. The chemical is also found in canned mandarin oranges, pretzels and Japanese ramen noodles. More concentrated grades of lye are used to clear drains and clean ovens. Scary …