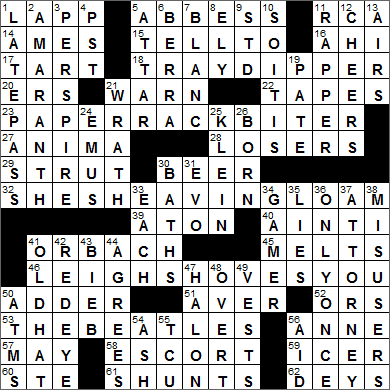 CROSSWORD SETTER: Jeffrey Wechsler
THEME: Beatle Spoonerisms … each of today’s themed answers is the title of a Beatles song, but expressed as a spoonerism:

18A. One who might cause a spill at a cafeteria? : TRAY DIPPER (from “Day Tripper”)
23A. Dog attacking a newsstand? : PAPER RACK BITER (from “Paperback Writer”)
32A. Answer to “What’s her job in the garden supply store?”? : SHE’S HEAVING LOAM (from “She’s Leaving Home”)
46A. What happens after getting in Vivien’s way on a movie set? : LEIGH SHOVES YOU (from “She Loves You”)

Today’s Wiki-est, Amazonian Googlies
Across
1. Arctic resident : LAPP
Lapland is a geographic region in northern Scandinavia, largely found within the Arctic Circle. Parts of Lapland are in Norway, Sweden and Finland. The people who are native to the region are called the Sami people. The Sami don’t like to be referred to as “Lapps” and they regard the term as insulting.

11. Co. bought by G.E. in 1986 : RCA
During WWI, the US government actively discouraged the loss of certain technologies to other countries, including allies. The developing wireless technologies were considered to be particularly important by the army and navy. The government prevented the General Electric Company from selling equipment to the British Marconi Company, and instead facilitated the purchase by GE of the American Marconi subsidiary. This purchase led to GE forming the Radio Corporation of America, the forerunner to todays RCA brand. The Department of Justice forced GE to give their ownership of RCA in 1930s due to antitrust concerns. Paradoxically, GE purchased RCA in 1985, and then broke it the company in 1986.

14. NASA’s ___ Research Center : AMES
The Ames Research Center is just down the road here, located at Moffett Field, at the southern tip of San Francisco Bay. Joseph Ames was a member of the National Advisory Committee for Aeronautics when it was formed in 1915, and chaired the committee from 1919-1939.

18. One who might cause a spill at a cafeteria? : TRAY DIPPER (from “Day Tripper”)
The Beatles released the song “Day Tripper” at the end of 1965 for the Christmas market. The flip-side featured the song “We Can Work It Out”, and the record was the first one ever to be described as “double A-side”.

21. Yellow-card, e.g. : WARN
A series of colored penalty cards is used by referees and umpires in many sports, most notably in soccer. The cards were first used in the 1970 FIFA World Cup in Mexico, after language difficulties created confusion during the prior competition in 1966. The main cards used are a yellow card indicating a caution, and a red card indicating expulsion from the game.

32. Answer to “What’s her job in the garden supply store?”? : SHE’S HEAVING LOAM (from “She’s Leaving Home”)
Loam is soil made up of sand, silt and clay in the ratio of about 40-40-20. Relative to other soil types, loam is is usually rich in nutrients and moisture, drains well and is easy to till. Loam can also be used in constructing houses as it is quite strong when mixed with straw and dried.

41. Longtime “Law & Order” actor : ORBACH
Jerry Orbach was an American actor, noted for playing one of the lead detectives in “Law & Order” on television. Orbach also provided the voice for the character Lumière in the Disney feature “Beauty and the Beast”. He had an important role in the great movie “Dirty Dancing”, playing Dr. Jake Houseman, Baby’s father.

46. What happens after getting in Vivien’s way on a movie set? : LEIGH SHOVES YOU (from “She Loves You”)
Vivien Leigh was the stage name of English actress Vivian Hartley. Leigh’s two most famous roles were probably Scarlett O’Hara in “Gone with the Wind” and Blanche Dubois in “A Streetcar Named Desire”, for which she won her two Best Actress Oscars. Leigh’s second husband was fellow English actor Laurence Olivier.

50. Viperidae family member : ADDER
The Viperidae are a family of venomous snakes commonly referred to as vipers.

53. Group whose songs get spoonerized in 18-, 23-, 32- and 46-Across : THE BEATLES
The Beatles went through quite an evolution of names and band members. The evolution of band names is the Blackjacks, the Quarrymen, Johnny & the Moondogs, Beatals, the Silver Beetles, the Silver Beatles and finally the Beatles.

60. Paris’s ___-Chapelle : STE
Sainte-Chapelle is a beautiful Gothic chapel located on the Île de la Cité, the same island in the Seine that is home to Notre-Dame Cathedral. The name “Sainte-Chapelle” is usually translated as “Holy Chapel”. The chapel was built in the mid-1200s by Louis IX to house a relic that he believed to be the crown of thorns placed on the head of Jesus just prior to the Crucifixion.

62. Bygone Ottoman rulers : DEYS
“Dey” was a title used in North Africa, for rulers in Algiers, Tunis and Tripoli.

Down
2. “Immortal” flower in “Paradise Lost” : AMARANTH
Amaranth is a genus of about 60 flowering plants, also known as Amaranthus. The term “amaranth” comes from the Greek words for “unfading” and “flower”.

5. Natural perfume : ATTAR
Attar is a fragrant essential oil obtained from flowers. The term may particularly refer to attar of roses.

6. The catcher in the wry? : BERRA
Yogi Berra is regarded by many as the greatest catcher ever to play in Major League Baseball, and has to be America’s most celebrated “author” of malapropisms. Here are some greats:

8. English cathedral city : ELY
Ely Cathedral is a famous and beautiful church in the city of Ely in the county of Cambridgeshire. There is a Gothic door on the north face of the cathedral that was designed by Sir Christopher Wren, the man famous as the architect of St. Paul’s Cathedral in London. Christopher Wren had a personal link to the church, as his uncle was the Bishop of Ely.

13. Highfalutin attitude : AIRS
The term “highfalutin” dates back to the mid-1800s. some suggest that it may be a mutation from “high flying”, as “highfalutin” means “haughty” or “pretentious”.

19. Crostini topping : PATE
Pâté is a rich spreadable paste made up of a mixture of ground meat and fat, to which various vegetables, herbs and spices may be added. The most famous version of the paste is pâté de foie gras, made from the fattened livers of geese (“foie gras” means “fat liver” in French).

Crostini are Italian appetizers (literally “little toasts”) made up of pieces of toasted bread with a topping.

24. Big birds : EMUS
Emu eggs are very large, with a thick shell that is dark-green in color. One emu egg weighs about the same as a dozen chicken eggs.

26. With 28-Across, schlemiels : BORN
(28A. See 26-Down : LOSERS)
A “schlemiel“ is an awkward and clumsy person. “Shlemiel” is the Yiddish for “a bungler”, with the term coming from the German story “The Wonderful History of Peter Schlemihl”, published in 1813.

31. President Morales of Bolivia : EVO
Evo Morales has been President of Bolivia since 2006. Morales has a socialist agenda, and as such his government is a close ally to the regimes of Hugo Chavez in Venezuela and Fidel Castro in Cuba.

34. One frequenting arcades : GAMER
Our word “arcade” comes from the Latin “arcus” meaning “arc”. The first arcades were passages made from a series of arches. This could be an avenue of trees, and eventually any covered avenue. I remember arcades lined with shops and stores when I was growing up on the other side of the Atlantic. Arcades came to be lined with lots of amusements, resulting in amusement arcades and video game arcades.

37. Mason, notably : ATTORNEY
I must have read all of the Perry Mason books when I was in college. I think they kept me sane when I was facing the pressure of exams. Author Erle Stanley Gardner was himself a lawyer, although he didn’t get into the profession the easy way. Gardner went to law school, but got himself suspended after a month. So, he became a self-taught attorney and opened his own law office in Merced, California. Understandably, he gave up the law once his novels became successful.

41. Stale : OLD HAT
The use of “old hat” to mean something “out of date” started about 1911. Before that, the term “old hat” meant something very different, and very vulgar. “Old hat” was the name given to a very private part of a woman, the idea being that it was “often felt” (as in a “felt hat”). I just don’t know what to say …

43. “Boyfriend” singer, to fans, with “the” : BIEB
Justin Bieber is a young pop singer from London, Ontario. Bieber was actually discovered on YouTube by talent manager Scooter Brown. Fans of Bieber call themselves “Beliebers”. Personally, I’m no believer in Bieber …

47. Fire-suppressing compound : HALON
Halons are compounds that are commonly used in fire suppression and dry cleaning. They are a whole series of hydrocarbons in which one or more hydrogen atoms have been replaced with a halogen atom(s), especially bromine.

50. You might be recorded using them : ATMS
ATM (Automatic Teller Machine)

55. Fort Worth campus, for short : TCU
Texas Christian University (TCU) is a private school in Fort Worth, Texas. TCU used to be called AddRan Male & Female, named after an AddRan Clark, the son of Addison Clark who died at the age of 3-years-old from diphtheria. Poor young AddRan was named after his father and his brother, Addison and Randolph.