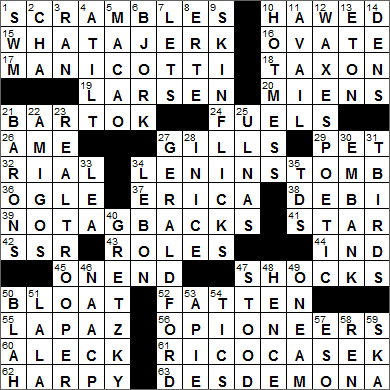 Today’s Wiki-est, Amazonian Googlies
Across
16. Like basil leaves : OVATE
Traditionally, basil is considered “the king of herbs”. And in fact, the herb’s name comes form the Greek “basileus” meaning “king”.

21. “Bluebeard’s Castle” composer : BARTOK
“Bluebeard’s Castle” is an opera by Hungarian composer and pianist Béla Bartók. The opera is a little unusual in that there are only two singing characters on stage. There is only one act, and the whole work takes just over an hour to perform.

27. Half-cup measures : GILLS
A gill is a unit of volume that’s really only used these days for measuring out alcoholic spirits. A gill is one quarter of pint, so a US gill is 4 fluid ounces, and an imperial gill is 5 fluid ounces.

29. Kind of classic rock? : PET
The Pet Rock lives on in history even though the fad really only lasted about 6 months, in 1975. It was enough to make Gary Dahl a millionaire though. His next idea, a “sand farm”, didn’t fly at all.

32. Coin of Iran : RIAL
“Rial” is name of the currency of Iran (as well as Yemen, Oman, Cambodia and Tunisia).

34. Attraction temporarily shut down and partly moved to Siberia during W.W. II : LENIN’S TOMB
Lenin’s Tomb is mausoleum in which lie the embalmed remains of Vladimir Lenin. The tomb lies just outside the walls of the Kremlin in Red Square. Lenin died in 1924, after which his body was housed in a wooden structure in Red Square for viewing by mourners. The current marble and granite structure was completed in 1930. The body has rested there on display ever since, except for the years of WWII when there was an apparent danger of Moscow falling to the Germans. The body was evacuated to Tyumen in Siberia.

37. Longtime “All My Children” role : ERICA
Susan Lucci is perhaps the most famous actor associated with daytime soap operas, and was the highest paid actor in daytime television. Lucci was nominated for a Daytime Emmy Award as Outstanding Lead Actress in a Drama Series an incredible 21 times, for her portrayal of Erica Kane in “All My Children”.

38. Mazar of “Entourage” : DEBI
Debi Mazar plays Shauna Roberts on the HBO series “Entourage”. You might have seen her on “Dancing with the Stars” a while back, although she didn’t do so well and was eliminated in the third week.

I haven’t seen the HBO series “Entourage”, but will have to take a look one day as I am a huge fan of HBO productions. “Entourage” is the story of a young movie star from New York City learning about life in Los Angeles. The show is co-produced by the actor Mark Wahlberg and so the storyline is somewhat autobiographical, based on a few of Wahlberg’s own experiences.

43. Cameos, for example : ROLES
Even in my day, a cameo role was more than just a short appearance in a movie (or other artistic piece). For the appearance to be a cameo, the actor had to playing himself or herself, and was instantly recognizable. With this meaning it’s easy to see the etymology of the term, as a cameo brooch is one with the recognizable carving of the silhouette of a person. Nowadays, a cameo is any minor role played by a celebrity or famous actor, regardless of the character played.

44. Like Bernie Sanders, before 2015: Abbr. : IND
Bernie Sanders has served as US Senator from Vermont since 2007. Sanders describes himself as a democratic socialist, and used to appear on the ballot as an independent. Prior to joining the Democratic Party in 2015, Sanders had been the longest-serving independent in the history of the US Congress.

55. Capital near Lake Titicaca : LA PAZ
The administrative capital of Bolivia, La Paz, is officially named Nuestra Senora de La Paz (Our Lady of Peace). La Paz is the seat of the Bolivian government, even though the constitutional capital of the country is Sucre.

56. First novel of the Great Plains trilogy : O, PIONEERS!
American novelist Willa Cather wrote what’s referred to as the “prairie trilogy”, books that tell the story of Swedish immigrants living in Nebraska. The titles in the trilogy are “O, Pioneers!”, “The Song of the Lark” and “My Antonia”. Cather won the Pulitzer Prize for another novel, “One of Ours”, that is set in Nebraska and the French battlefields of WWI.

60. “Smart” guy : ALECK
Apparently the original “smart Alec” (sometimes “Aleck”) was Alec Hoag, a pimp, thief and confidence trickster who plied his trade in New York City in the 1840s.

61. Lead singer for the Cars : RIC OCASEK
Ric Ocasek is an American musician of Czech heritage, and was the lead vocalist of the rock band known as the Cars.

62. Hybrid woman-bird monster : HARPY
In Greek mythology, a harpy was a winged spirit noted for stealing food from a king called Phineus. Phineas angered the god Zeus and so was punished by being exiled to an island with a buffet of food that he could never eat. Every time he tried to eat, harpies would arrive and steal the food. We use the term today for a shrewish woman or a predatory person.

63. The “thee” in Shakespeare’s line “But I do love thee! and when I love thee not, / Chaos is come again” : DESDEMONA
In William Shakespeare’s “Othello”, the title character utters the following lines to his wife Desdemona:

Excellent wretch! Perdition catch my soul
But I do love thee! and when I love thee not,
Chaos is come again.

6. Single-named musical artist : BJORK
Björk is a rather eccentric singer-songwriter from Iceland who is a big hit in the UK in particular. Björk is the daughter of a nationally-recognized union leader in her home country.

21. Magna Carta drafters : BARONS
The Magna Carta is a landmark document issued in England in 1215. It represents the first time that an English king had to submit to the will of his subjects, a group of barons who sought to limit the powers of the monarchy. In particular the Magna Carta calls out that no freeman could be punished except through the law of the land. And famously, the Magna Carta was an inspiration for the United States Constitution.

22. Title trio in a 1986 comedy : AMIGOS
“Three Amigos” is a 1986 comedy film starring Steve Martin, Chevy Chase and Martin Short as three silent movie stars who are mistaken for real western heroes by a Mexican village, a parody on the storylines in “Seven Samurai” and “The Magnificent Seven”.

27. Onetime political leader with a museum in Grand Rapids, Mich. : GERALD FORD
Gerald Ford is the only person to have served as both Vice President and President of the US, without having been elected to those positions. Ford was nominated by President Richard Nixon to replace Vice President Spiro Agnew after he resigned in 1973. Vice President Ford assumed the presidency the following year after President Nixon resigned.

31. Alternatives to ‘Vettes : T-BIRDS
Ford manufactured the Thunderbird (T-Bird) from 1955 to 2005, originally as a two-seater sporty convertible. The T-Bird was introduced as a competitor to Chevrolet’s new sports car, the Corvette.

33. Bucolic setting : LEA
The word “bucolic”, meaning rustic or rural, comes to us from the Greek word “boukolos” meaning “cowherd”.

34. Simon of Duran Duran : LE BON
Simon Le Bon is the lead singer with the English band Duran Duran. Le Bon is a passionate sailor and garnered a lot of attention when his yacht lost its keel in the 1985 Fastnet race. Before Le Bon and his crew could be rescued, they spent 40 minutes trapped underwater inside the hull. The incident didn’t deter Le Bon from sailing though, and not long after he came third in the 1985-1986 Whitbread Round the World Race.

35. Goals of some drives, for short : TDS
Touchdowns (TDs)

40. Nine-time Hart Memorial Trophy winner : GRETZKY
Wayne Gretzky is regarded by many as the greatest ever player of ice hockey, and indeed has the nickname “The Great One”.

46. Image Awards grp. : NAACP
The NAACP Image Awards are presented annually to recognise people of color in the worlds of film, television, music and literature. The first awards were presented in 1967, and the ceremony usually takes place in Los Angeles.

51. When repeated, part of Van Morrison’s “Brown Eyed Girl” : LA LA
Van Morrison is a singer-songwriter from Belfast in Northern Ireland. Back in Ireland we refer to him as “Van the Man”. Some of his more famous songs are “Brown Eyed Girl”, “Moondance”, “Gloria” and “Have I Told You Lately”.

53. Cap-___ (from head to toe) : A-PIE
Our term “cap-a-pie”, meaning “from head to toe”, comes directly from the Middle French “cap-à-pie”. The French term translates literally as “head to foot”.

58. Kylo ___ of “Star Wars” : REN
Adam Driver is an actor best known for playing Adam Sackler on the TV show “Girls” that airs on HBO. Driver’s career got a huge boost in 2015 when he played villain Kylo Ren in “Star Wars: The Force Awakens”.

59. Mighty Mighty Bosstones genre : SKA
Ska originated in Jamaica in the late fifties, and was the precursor to reggae music. No one has a really definitive etymology of the term “ska”, but it is likely to be imitative of some sound.