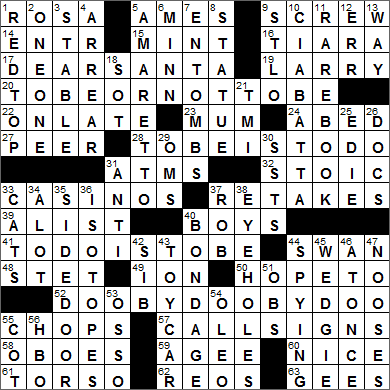 Today’s Wiki-est, Amazonian Googlies
Across
1. Parks who sparked a boycott : ROSA
Rosa Parks was one of a few brave women in days gone by who refused to give up their seats on a bus to white women. It was the stand taken by Rosa Parks on December 1, 1955 that sparked the Montgomery, Alabama Bus Boycott. President Clinton presented Ms. Parks with the Presidential Medal of Freedom in 1996. When she died in 2005, Rosa Parks became the first ever woman to have her body lie in honor in the US Capitol Rotunda.

5. City of central Iowa : AMES
The Iowa city of Ames was founded as a stop on the Cedar Rapids and Missouri Railroad in 1864. It was named for US Congressman Oakes Ames from the state of Massachusetts in honor of the role that Ames played in the building of the transcontinental railroad.

14. ___’acte : ENTR
The term “entr’acte” comes to us from French, and is the interval “between two acts” (“entre deux actes”) of a theatrical performance. It often describes some entertainment provided during that interval.

16. Prom queen’s wear : TIARA
A prom is a formal dance held upon graduation from high school (we call them “formals” over in Ireland). The term “prom” is short for “promenade”, the name given to a type of dance or ball.

19. N.B.A. Hall-of-Famer Bird : LARRY
Larry Bird played basketball for the Boston Celtics from 1978 to 1992. Bird has a lot of very loyal fans, and some might even be described as fanatical. In 2005 an Oklahoma City man was convicted of a crime involving a shooting. On being sentenced to 30 years imprisonment, the guilty man requested that the sentence be changed to 33 years so that it matched the number on Larry Bird’s jersey. The judge obliged …

20. Words from Shakespeare : TO BE OR NOT TO BE

23. Closemouthed : MUM
The phrase “mum’s the word” has been around since the early 1700s. “Mum” has been used to mean “silent” for centuries, the idea being that “mum” is the sound made when the lips are tightly sealed.

28. Words from Socrates : TO BE IS TO DO
In Ancient Greece, Socrates was a respected thinker of his day. One of Socrates’ most clever students was Plato, who spent much of life espousing the work and thinking of his mentor and teacher. In later life, Plato himself had a student who built on the work of both Socrates and Plato. That second generation student was Aristotle. Socrates fell out of favor with the political leaders in Athens who put him on trial on trumped-up charges. He was found guilty of corrupting the youth of the city-state and of not believing in the gods of the state. The sentence levied was death by drinking hemlock.

32. Showing no emotion : STOIC
Zeno of Citium was a Greek philosopher famous for teaching at the Stoa Poikile, the “Painted Porch”, located on the north side of the Ancient Agora of Athens. Because of the location of his classes, his philosophy became known as stoicism (from “stoa”, the word for “porch”). And yes, we get our adjective “stoic” from the same root.

39. Crème de la crème : A-LIST
The “crème de la crème” is the elite, the best of the best. The term is French and translates as “cream of the cream”.

40. All Harrow students : BOYS
Harrow School in north-west London is a boys boarding school, one of only four boys-only, boarding-only independent schools in England. The other three schools in the category are the famous Eton College, Radley College and Winchester College. The list of Harrow alumni includes British Prime Ministers Robert Peel, Alec Baldwin and Winston Churchill, and Indian Prime Minister Jawaharlal Nehru.

41. Words from Sartre : TO DO IS TO BE
Jean-Paul Sartre was a leading French philosopher, as well as a writer and political activist. He also served with the French army during WWII and spent nine months as a prisoner of war having been captured by German troops. Sartre was one of the few people to have been awarded a Nobel Prize and to have then refused to accept it. He was named winner of the prize for Literature in 1964, for his first novel “Nausea”. Before his win, Sartre knew that his name was on the list of nominees so he wrote to the Nobel Institute and asked to be withdrawn from consideration. The letter somehow went unread, so he found himself having to refuse the award after he had been selected.

44. A cygnet is a baby one : SWAN
An adult male swan is called a “cob”, and an adult female is a “pen”. Young swans are called “swanlings” or “cygnets”.

48. [Ignore prior marks] : STET
“Stet” is a Latin word meaning “let it stand”. In editorial work, the typesetter is instructed to disregard any change previously marked by writing the word “stet” and then underscoring that change with a line of dots or dashes.

52. Words from Sinatra : DOOBY DOOBY DOO
Frank Sinatra was the only child of Italian immigrants living in Hoboken, New Jersey. Like so many of our heroes, Sinatra had a rough upbringing. His mother was arrested several times and convicted of running an illegal abortion business in the family home. Sinatra never finished high school, as he was expelled for rowdy conduct. He was later arrested as a youth on a morals charge for carrying on with a married woman, which was an offence back then. But Sinatra straightened himself out by the time he was twenty and started singing professionally.

58. Reed section : OBOES
The oboe is perhaps my favorite of the reed instruments. The name “oboe” comes from the French “hautbois” which means “high wood”. When you hear an orchestra tuning before a performance you’ll note (pun intended!) that the oboe starts off the process by playing an “A”. The rest of the musicians in turn tune to that oboe’s “A”.

59. James with a posthumous Pulitzer : AGEE
James Agee was a noted American film critic and screenwriter. Agee wrote an autobiographical novel “A Death in the Family” that won him his Pulitzer in 1958, albeit posthumously. He was also one of the screenwriters for the 1951 classic movie “The African Queen”.

61. Sculpted body part : TORSO
“Torso” (plural “torsi”) is an Italian word meaning the “trunk of a statue”, and is a term that we imported into English.

62. Speedsters of old autodom : REOS
The REO Speed Wagon (note the space between “speed” and “wagon”) is the vehicle. REO Speedwagon (no space) is the American rock band.

63. Turns right on a horse : GEES
“Haw!” is a command given to a trained animal that is hauling something (like a horse or an ox). “Haw!” is used to instruct the animal to turn to the left. The equivalent command for a right turn is “Gee!” Just to confuse things, the same commands are used in the British Isles but with the opposite meanings. That must be pretty unsettling for jet-setting plow horses …

Down
1. Variety of pasture grass : REDTOP
Redtop grass is also known as Black Bent. The grass is green with a purplish/red flower cluster, giving the variety its name.

2. Common soccer draw : ONE-ONE
That would be one goal apiece.

5. Almond-flavored liqueur : AMARETTO
Amaretto is an Italian liqueur with a sweet almond flavor. Even though the drink is sweet, it has a bitterness lent to it by the bitter almonds that are often used as a flavoring. The name “amaretto” is a diminutive of the Italian word “amaro” meaning “bitter”.

6. Sen. Al Franken’s state: Abbr. : MINN
Al Franken is the junior US Senator from Minnesota. Franken won the seat in 2009 after an extremely close race, a race that he eventually won by just 312 votes. Prior to serving in the Senate, Franken was a noted satirist and a writer for “Saturday Night Live”.

8. Central Park’s “Alice in Wonderland,” for one : STATUE
There is a large bronze statue called “Alice” in Central Park. It is a work by José de Creeft depicting the title character in Lewis Carroll’s “Alice in Wonderland”. Unveiled in 1959, the statue was commissioned by the founder of the Dell Publishing Company George T. Delacorte, Jr., in honor of his wife who had just passed away.

9. Normandy battle site : ST LO
Saint-Lô is a town in Normandy that was occupied by Germany in 1940. Saint-Lo stood at a strategic crossroads and so there was intense fighting there during the Normandy invasion of 1944. After a prolonged bombardment, very little of the town was left standing.

10. Panini bread : CIABATTA
The Italian white bread known as ciabatta is a favorite of mine. “Ciabatta” is Italian for “slipper”, a reference to the shape of the traditional loaf. The simple recipe, with ingredients limited to wheat flour, water, salt and yeast, only dates to 1976 when it was created by a baker in Verona, as something to compete with the French baguette.

18. W. C. Fields persona : SOT
W. C. Fields worked hard to develop the on-screen image of a pretty grumpy old man. In his real life he was fairly grumpy too, and fond of protecting his privacy. He was famous for hiding in the shrubs around his house in Los Angeles and firing a BB gun at the legs of tourists who intruded on his property. Also Fields often played the drunk on-screen. In real life, Fields didn’t touch alcohol at all when he was younger, partly because he didn’t want to do anything to impair his skill as a juggler. But later in life he took to heavy drinking, so much so that it affected his health and interfered with his ability to perform.

29. Meditation sounds : OMS
“Om” is a sacred mystic word from the Hindu tradition. “Om” is sometimes used as a mantra, a focus for the mind in meditation.

30. Fliers until ’03 : SSTS
The most famous supersonic transport (SST) is the retired Concorde. Famously, the Concorde routinely broke the sound barrier, and cruised at about twice the speed of sound. Above Mach 2, frictional heat would cause the plane’s aluminum airframe to soften, so airspeed was limited.

31. Start to freeze? : ANTI-
The antifreeze that we put into our cars has ethylene glycol as the active ingredient. Ethylene glycol is dangerous stuff, and is very poisonous. Ingestion causes calcium oxalate crystals to form in the kidneys. It sounds like a horrible way to go …

36. Deuterium and tritium : ISOTOPES
There are three naturally occurring isotopes of hydrogen. The most common isotope is what we ordinarily refer to as hydrogen, and it has no neutrons. This particular isotope is sometimes called “protium”. The isotope with one neutron is called “deuterium”. When paired with two atoms of oxygen, deuterium forms “heavy water”. The hydrogen isotope with two neutrons is called “tritium”. Tritium is radioactive, with a half-life of 12.3 years.

53. ___ buco : OSSO
“Osso” is the Italian word for bone as in the name of the dish Osso Buco: braised veal shanks.

54. Prefix with resin : OLEO-
In nature, oleoresins are mixture of essential oil and resin. Examples would be balsams, also known as turpentines.