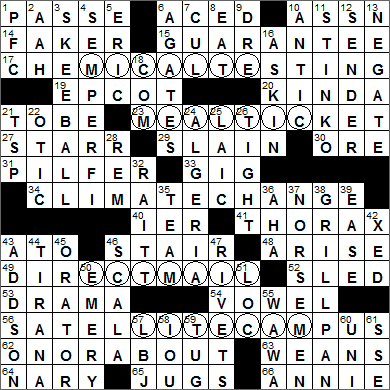 CROSSWORD SETTER: Andrew Reynolds
THEME: Climate Change … each of today’s themed answers includes a sequence of circled letters. Each sequence is a CHANGED version of the word CLIMATE:

34A. Environmentalist’s concern … or a hint to the circled letters : CLIMATE CHANGE

17A. Some lab work : CHEMICAL TESTING
23A. Source of income : MEAL TICKET
49A. Like some ad campaigns : DIRECT-MAIL
56A. School branch : SATELLITE CAMPUS

14. Flopper in basketball, e.g. : FAKER
In basketball, a “flop” is a fall in which a player is acting as though fouled, with the intent of getting a personal foul called on an opponent.

19. Home of Spaceship Earth : EPCOT
EPCOT Center (now just called Epcot) is the theme park beside Walt Disney World in Florida. EPCOT is an acronym standing for Experimental Prototype Community of Tomorrow, and is a representation of the future as envisioned by Walt Disney. Walt Disney actually wanted to build a living community for 20,000 residents at EPCOT, but he passed away before that vision could be realized.

27. Fab Four surname : STARR
Ringo Starr’s real name is Richard Starkey. Before he joined the Beatles (replacing drummer Pete Best), Starkey played with the Raving Texans. It was with the Raving Texans that he adopted the name “Ringo Starr”, because he wore a lot of rings and he thought it sounded “cowboyish”. Back then his drum solos were billed as “Starr Time”.

31. Filch : PILFER
“Filch” is a slang term for steal, especially in a sly way.

33. Musician’s booking : GIG
Musicians use “gig” to describe a job, a performance. The term originated in the early 1900s in the world of jazz.

41. Part of an insect’s body that holds the legs : THORAX
By definition, an insect has a body made up of three parts: head, thorax and abdomen.

53. Emmy classification : DRAMA
The Emmy Awards are the television equivalent of the Oscars in the world of film, the Grammy Awards in music and the Tony Awards for the stage. Emmy Awards are presented throughout the year, depending on the sector of television being honored. The most famous of these ceremonies are the Primetime Emmy Awards and the Daytime Emmy Awards. The distinctive name of “Emmy” is a softened version of the word “immy”, the nickname given to the video camera tubes found in old television cameras.

66. Sharpshooter Oakley : ANNIE
Many regard Annie Oakley as the first American female superstar, given her celebrity as a sharpshooter in Buffalo Bill’s Wild West Show. She toured with the show all over Europe, and performed her act for the likes of Queen Victoria of England and Kaiser Wilhelm II of Germany. Supposedly, using a .22 caliber rifle from 90 feet away, Oakley could split a playing card edge-on, and shoot five or six holes in the card before it hit the ground!

3. Arcade game played on an incline : SKEE BALL
Skee Ball is that arcade game where you roll balls up a ramp trying to “bounce” it into rings for varying numbers of points. The game was first introduced in Philadelphia, in 1909.

4. Motto for a 1-Down, informally : SEMPER FI
(1D. U.S.M.C. one-striper : PFC)
“Semper Fidelis” is the motto of the United States Marine Corps (USMC). The phrase is Latin and means “Always Faithful”. The US Marine Corps isn’t the only military unit using “Semper Fidelis” as a motto . It’s also used by the Portuguese Marine Corps, the Republic of China Marine Corps and the Swiss Grenadiers.

5. ___ the Red : ERIC
According to Icelandic tradition, Erik the Red was the man responsible for founding the first Nordic settlement in Greenland. Erik had a famous son, the explorer Leif Ericson.

6. Shooting marbles : AGATES
A playing marble made from agate is called just that, an agate. Steelies on the other hand, are made from solid steel.

7. ___-de-sac : CUL
Even though “cul-de-sac” can indeed mean “bottom of the bag” in French, the term cul-de-sac is of English origin (the use of “cul” in French is actually quite rude). The term was introduced in aristocratic circles at a time when it was considered very fashionable to speak French. Dead-end streets in France are usually signposted with just a symbol and no accompanying words, but if words are included they are “voie sans issue”, meaning “way without exit”.

9. Rap’s Dr. ___ : DRE
Dr. Dre is the stage name of rapper Andre Romelle Young. Dr. Dre is known for his own singing career as well as for producing records and starting the careers of others such Snoop Dogg, Eminem and 50 Cent.

25. Of the flock : LAIC
Anything described is laic (or “laical, lay”) is related to the laity, those members of the church who are not clergy. The term “laic” ultimately comes from the Greek “laikos” meaning “of the people”.

28. Dream state : REM
REM is an acronym standing for Rapid Eye Movement sleep. REM sleep takes up 20-25% of the sleeping hours and is the period associated with one’s most vivid dreams.

32. “Nick of Time” singer Bonnie : RAITT
Bonnie Raitt is a blues singer, originally from Burbank, California. Raitt has won nine Grammys for her work, but she is perhaps as well known for her political activism as she is for her music. She was no fan of President George W. Bush while he was in office, and she sure did show it.

35. Reds or Blues : TEAM
The Red Scare (i.e. anti-communist sentiment) following WWII had such an effect on the populace that it even caused the Cincinnati baseball team to change its name from the Reds. The team was called the Cincinnati Redlegs from 1953-1958, as the management was fearful of losing money due to public distrust of any association with “Reds”.

46. Teatro alla ___ : SCALA
La Scala Opera House opened in 1778. It was built on the site of the church of Santa Maria della Scala, which gave the theater its name: “Teatro alla Scala” in Italian.

50. Mani-pedi tool : EMERY
Emery is a very hard type of rock that is crushed for use as an abrasive. Emery paper is made by gluing small particles of emery to paper. Emery boards are just emery paper with a cardboard backing. And emery boards are primarily used for filing nails.

57. War on Poverty prez : LBJ
President Lyndon Johnson (LBJ) is one of only four people to have held all four elected federal offices, namely US Representative, US Senator, US Vice-President and US President. As President he is perhaps best remembered for escalating involvement in the Vietnam War, and for his “Great Society” legislation.

60. College, in Down Under slang : UNI
In Australia (Down Under) and in the British Isles the term “Uni” is routinely used for “university”.