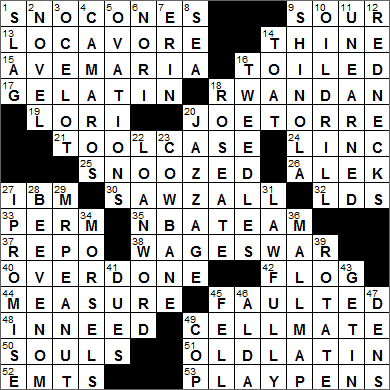 Today’s Wiki-est, Amazonian Googlies
Across
1. Colorful carnival offerings : SNO-CONES
A sno-cone (also “snow cone”) is just a paper cone filled with crushed ice and topped with flavored water. Italian ice is similar, but different. Whereas the flavoring is added on top of the ice to make a sno-cone, Italian ice is made with water that is flavored before it is frozen.

13. Farm-to-table advocate : LOCAVORE
A “locavore” is someone who limits his or her diet to food that is produced locally, often within 100 miles of its point of purchase. There’s a great memoir by the author Barbara Kingsolver that discusses the experiences of her and her family with the locavore lifestyle called “Animal, Vegetable, Miracle: A Year of Food Life” An excellent read …

15. Words recited before “gratia plena, Dominus tecum” : AVE MARIA
“Ave Maria” (“Hail Mary” in English) is the prayer at the core of the Roman Catholic Rosary, which itself is a set of prayers asking for the assistance of the Virgin Mary. Much of the text of the “Hail Mary” comes from the Gospel of Luke. The words in Latin are:

18. Like President Paul Kagame : RWANDAN
Paul Kagame has been President of Rwanda since 2000, taking over after the resignation of his predecessor Pasteur Bizimungu. Kagame then an election in his own right in 2003, and again in 2010.

19. Actress Singer of “Footloose” and TV’s “Fame” : LORI
Lori Singer is an actress, and also a cellist. Singer’s most famous acting role was the daughter of the Reverend Shaw Moore (played by John Lithgow) in “Footloose”.

20. Skipper whose #6 was retired in 2014 : JOE TORRE
As a manager, Joe Torre was part of four World Series wins, all of them with the New York Yankees baseball team. Torre is an Italian American who was born in Brooklyn, New York. During the run up (pun intended!) to the 2006 Winter Olympics in Turin, Torre carried the Olympic flame part of the way through Florence in Italy, handing it over to the next runner at the famous Ponte Vecchio. I’d guess that was quite a thrill for him …

24. “The Mod Squad” role : LINC
The 1999 movie “The Mod Squad” was an adaptation of the seventies television show of the same name. The part of Lincoln “Linc” Hayes was played by Omar Epps, Claire Danes played Julie Barnes and Giovanni Ribisi played Peter Cochran.

27. Terminal giant, once : IBM
IBM was founded as the Tabulating Machine Company in 1896. The company changed its name to the Computing Tabulating Recording Corporation (CTR) in 1911 and was listed on the New York Stock Exchange in 1916. The name of International Business Machines (IBM) was given first to the company’s Canadian subsidiary, and then its South American subsidiary. In 1924, it was decided to adopt the International Business Machines name for the whole company. Good choice …

30. Cutting-edge device named for its versatility : SAWZALL
A Sawzall is a reciprocating saw made by the Milwaukee Electric Tool Company.

32. Grp. with many missionaries : LDS
The Church of Jesus Christ of Latter-day Saints, often abbreviated to “LDS”, is known colloquially as the Mormon Church.

33. Tightener of locks : PERM
“Perm” is the name given to a permanent wave, a chemical or thermal treatment of hair to produce waves or curls. I don’t worry about such things, as it’s a number-one all over for me …

35. Bucks, e.g. : NBA TEAM
The Bucks are an NBA basketball team based in Milwaukee, Wisconsin. The team was formed in 1968 as an NBA expansion team.

44. Piano bar? : MEASURE
Musical scores are divided into “measures”, although on the other side of the Atlantic the term “bar” is used instead of “measure”.

49. Cooler person to live with? : CELLMATE
The cooler, the pen, the slammer … prison.

50. Charon’s passengers : SOULS
The River Styx of Greek mythology was the river that formed the boundary between the Earth and the Underworld (or “Hades”). The souls of the newly dead had to cross the River Styx in a ferry boat piloted by Charon. Traditionally, a coin would be placed in the mouths of the dead “to pay the ferryman”.

3. Its name comes from Nahuatl for “jaguar” : OCELOT
The ocelot is found mainly in South and Central America, although there have been sightings as far north as Arkansas. An ocelot doesn’t look too different from a domestic cat, and some have been kept as pets. Perhaps most famously, Salvador Dali had one that he carried around everywhere with him.

Nahuatl is a group of languages mainly spoken in Central Mexico.

The jaguar is the third largest feline in the world, after the tiger and the lion. The jaguar resembles a leopard, but is bigger. It is found through much of South and Central America as well as the southern US. The jaguar has a really strong bite, even compared to the bigger cats. It usually kills its prey by biting through the skull.

4. Z28 and ZL1 : CAMAROS
The Chevrolet Camaro is a car produced by General Motors from 1966 to 2002, and reintroduced in 2009. The Camaro shared much of its design with the Pontiac Firebird, and was introduced as a potential competitor to the Ford Mustang.

6. Sushi wrapper : NORI
Nori is an edible seaweed that we used to know as “laver” when I was living in Wales. Nori is usually dried into thin sheets. Here in the US, we are most familiar with nori as the seaweed used as a wrap for sushi.

7. Mayo’s place : ERIN
County Mayo is in the west of Ireland, and is one of my favorite parts of the country. “Mayo” is an anglicized spelling of the county’s name in Irish, “Maigh Eo”, which is pronounced as “Mayo” and means “plain of the yew trees”. One of the most famous spots in Mayo is Croagh Patrick, a 2,500 foot peak that many devout Catholic pilgrims ascend in their bare feet.

8. Arabian ___ : SEA
The Arabian Sea is an arm of the Indian Ocean that lies off the south coasts of Pakistan and Iran, and is bounded in the west by Somalia, and in the east by India.

9. Polish giant, once : SHINOLA
Shinola was a brand of shoe polish that was on the market from 1877 until 1960. The brandname was acquired by Bedrock Manufacturing in 2011. We can’t get Shinola shoe polish anymore, but we can buy Shinola watches, bicycles and leather goods.

16. Lures with music : TWEEDLES
“To tweedle” is to coax, allure. Originally “to tweedle” meant “to sing, whistle”, so today the term can often mean “to coax with music”.

18. Optimistic : ROSEATE
Something roseate is “rose colored”, like rose colored glass, and hence also refers to something that is optimistic, perhaps overly so.

“Some Like it Hot” is such a fun movie, released in 1959 and directed by Billy Wilder. The big three in the cast are of course Marilyn Monroe, Tony Curtis and Jack Lemmon. Several years ago a stage version of “Some Like It Hot” was playing in San Francisco, with Tony Curtis in the cast. This time he played the older man who was wooing the Jack Lemmon character in the movie.

23. Plant poisonous to cattle : COWBANE
Cowbane is a poisonous plant containing the compound cicutoxin, which disrupts the central nervous system. Just one bite of the root of a cowbane plant can cause death.

29. Shelled shill : MR PEANUT
Planters is the company with the Mr. Peanut icon. Mr. Peanut was the invention of a first-grader named Antonio Gentile, a young man who won a design contest in 1916. A remarkable achievement, I’d say …