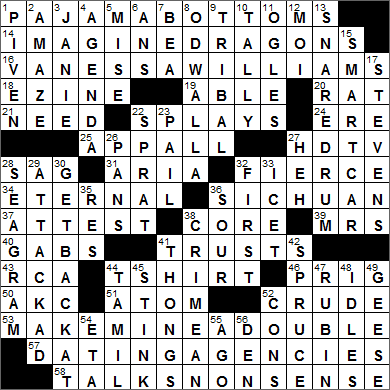 Today’s Wiki-est, Amazonian Googlies
Across
1. Bedroom set piece? : PAJAMA BOTTOMS
Our word “pajamas” (“PJs” for short) comes to us from the Indian subcontinent, where “pai jamahs” were loose fitting pants tied at the waist and worn at night by locals and ultimately by the Europeans living there. And “pajamas” is another of those words that I had to learn to spell differently when I came to America. In the British Isles the spelling is “pyjamas”.

14. Band with the 2012 double-platinum album “Night Visions” : IMAGINE DRAGONS
Imagine Dragons is a rock band that formed in 2008 in Las Vegas.

16. Celebrity with the fashion line “V.” : VANESSA WILLIAMS
Vanessa Williams has built quite a career for herself after briefly holding the 1983 Miss America title. Williams is now a successful actress and singer. On the big screen she did a fine job playing the lead opposite Arnold Schwarzenegger in 1996’s “Eraser”. On the small screen she had a major role in the hit comedy “Ugly Betty”. Williams is sometimes confused with fellow actress Vanessa A. Williams who is no relation.

24. “___ on my bed my limbs I lay” (line from Coleridge) : ERE
“The Pains of Sleep” is an 1803 poem by Samuel Taylor Coleridge. Each of the three stanzas in the work detail a night of sleep, nights that are getting progressively more restless.

Ere on my bed my limbs I lay,
It hath not been my use to pray
With moving lips or bended knees;
But silently, by slow degrees,
My spirit I to Love compose,
In humble trust mine eye-lids close,
With reverential resignation
No wish conceived, no thought exprest,
Only a sense of supplication;

27. It has a good resolution : HDTV
In the digital world, resolution of a display, television, image etc. is defined by the number of pixels that can be displayed in a standard area (say a square inch). The emphasis today is on producing larger area displays/televisions, i.e increasing the number of pixels simply by increasing the size of the screen. In the past couple of decades the emphasis was on adding more pixels within the same screen size to increase resolution. This would just be wasted effort these days as further increases in resolution cannot be perceived by the eye. Now that TVs are capable of displaying such high resolutions, broadcasters are responding by producing a video signal of higher resolution that they call high-definition television (HDTV).

31. “Di quella pira,” e.g. : ARIA
“Di quella pira” is an aria from Giuseppe Verdi’s opera “Il trovatore”. Written for Manrico, the tenor part, the aria contains a famous and somewhat controversial “high C” note. This high C is tough for many tenors to reach, and those who manage to do so tend to get a round of applause during a performance. Interestingly, the high C does not appear on Verdi’s original score. Apparently, one of the first tenors to sing the part decided to introduce the note to add some drama to the role, and subsequent tenors have been asked to follow his lead.

34. “___ life belongs to those who live in the present”: Wittgenstein : ETERNAL
Ludwig Wittgenstein was an Austrian-British philosopher who taught at Cambridge University from 1929 to 1947.

36. Chinese province where a spicy cuisine originated : SICHUAN
Sichuan (also Szechuan) is a province in southwest China. Sichuan is noted for its cuisine, which is hot and spicy as it uses plenty of garlic, chili peppers and the Sichuan peppercorn. A famous Szechuan dish in the US is Kung Pao chicken or shrimp.

41. Targets of President Taft : TRUSTS
The Sherman Antitrust Act dates back to 1890. The act makes it illegal for companies to seek a monopoly or to form cartels. It is named for US Senator John Sherman , the principal author of the act. During the Progressive Era, President Theodore Roosevelt sued 45 companies under the Sherman Act, and President William Howard Taft sued 75.

50. Org. with a name registration : AKC
The American Kennel Club (AKC) is the organization that handles registration of purebred dogs The AKC also promotes dog shows around the country including the famous Westminster Kennel Club Dog Show.

57. Match.com competitors : DATING AGENCIES
Match.com is an online dating service. The company was started in 1993 and claims to have over 20 million members worldwide, in the ratio of male to female of 49:51.

Down
1. Jeremy of “Entourage” : PIVEN
Jeremy Piven is an actor best known for playing Ari Gold in the HBO comedy series “Entourage”, and for playing the title character in the excellent British period drama “Mr Selfridge”.

3. Girl with a gun in an Aerosmith hit : JANIE
Aerosmith is a hard rock band from Boston that formed in 1970. Aerosmith is the best-selling American rock band of all time, and holds the record for most gold albums by any American group.

4. What a chair covers : AGENDA
“Agenda” is a Latin word that translates as “things to be done”, coming from the verb “agere” meaning “to do”.

5. ___ en scène : MISE
“Mise en scène” is a French phrase, literally meaning “putting on stage”. We use it to describe the setting of props and actors on a stage, or film set, before the action begins.

8. Big name in energy bars and smoothies : ODWALLA
Odwalla is a company in Half Moon Bay (just south of San Francisco) that sells fruit juices, smoothies and energy bars.

10. It may be running : TALLY
Back in the mid-1600s, a “tally” was a stick marked with notches that tracked how much one owed or paid. The term came from the Latin “talea” meaning “stick, rod”.

13. Punch line instrument : SNARE DRUM
Snare drums are so called because they have a set of wire strands (called snares) stretched across the bottom surface of the drum. When the drum is struck, the snares vibrate against the bottom drumhead producing a unique sound.

15. Little something for the road? : SMART CAR
smart cars are manufactured by Daimler AG, the same company that makes Mercedes-Benz automobiles. The smart car was developed in cooperation with the wristwatch brand Swatch. The name “smart” (always in lower-case letters) stands for Swatch Mercedes ART.

17. Piano-playing Cat : STEVENS
The singer-songwriter that I mainly know as Cat Stevens has been through a few names in his life. He was born in London as Steven Georgiou and adopted the stage name “Steve Adams” in the mid-sixties. A year later he changed his stage name to “Cat Stevens”, with which he had most of success. During this time he had hits with classic songs like “Wild World”, “Moonshadow” and “Morning Has Broken”. He also wrote the song “The First Cut Is the Deepest”, which became a hit for four different artists. In 1977, Stevens converted to Islam and took the name Yusuf Islam in 1978.

22. Sardine relative : SPRAT
A sprat is a forage fish that travels in large schools with other species of fish, and that looks like a baby sardine. Although sprats are found all over the world, they are particularly associated with the Baltic Sea in Northern Europe.

28. Distillery eponym Joseph : SEAGRAM
Seagram’s was once the largest distiller of alcoholic beverages in the world. The company was founded in Waterloo, Ontario as a distillery and was taken over by Joseph E. Seagram in 1883, hence the name. The Seagram’s empire fell apart in 2000 after some terrible investment decisions.

33. Celebrity whose name sounds like a drink : ICE-T
Rapper Ice-T must be sick of having his name come up as an answer in crossword puzzles. Maybe he should have stuck to his real name, Tracy Marrow? Then again, maybe not … Ice-T has been interested in acting for decades and made his film debut in the 1984 movie about break-dancing called “Breakin’”. He has also played Detective Fin Tutuola in the TV show “Law & Order: Special Victims Unit” since the year 2000.

35. Thing, at bar : RES
“Res” is the Latin for “thing”. “Res” is used in a lot of phrases in the law, including “res ipsa loquitur”. The literal translation of “res ipsa loquitur” is “the thing speaks for itself”. It refers to situations when there is an injury, and the nature of the injury is such that one can assume that negligence had to have taken place.

38. ___ Peninsula (2014 crisis site) : CRIMEAN
Crimea is a peninsula jutting out into the Black Sea that is almost completely surrounded by water. It is connected to the Ukrainian mainland to the north by the Isthmus of Perekop, and is separated from the nearby Russian region of Kuban by the narrow (less than 10 miles) Kerch Strait. Crimea has been occupied by foreign powers many times over the centuries, and now control of the region is disputed by Ukraine and Russia.

44. Source of the words “curry” and “pariah” : TAMIL
Tamils are a large ethnic group of almost 80 million people who speak Tamil as their mother tongue. Despite the large Tamil population, there is no Tamil state. The highest concentration of Tamils is in Sri Lanka, where they make up about 25% of the population.

Curry powder is a mixture of spices used in South Asian cuisine. The actual composition of curry powder varies depending on the cuisine. The term “curry” is an anglicization of the Tamil “kari” meaning “sauce”.

47. Apply, as Bengay : RUB IN
Bengay is sold as a painkilling heat rub, to relieve aching muscles. It was developed in France by a Dr. Jules Bengue (hence the name) and was first sold in America way back in 1898.

49. Chuckleheads : GEESE
A chucklehead is a blockhead, a silly goose.

54. H : ETA
Eta is the seventh letter of the Greek alphabet, and is a forerunner of our Latin character “H”. Originally denoting a consonant, eta was used as a long vowel in Ancient Greek.