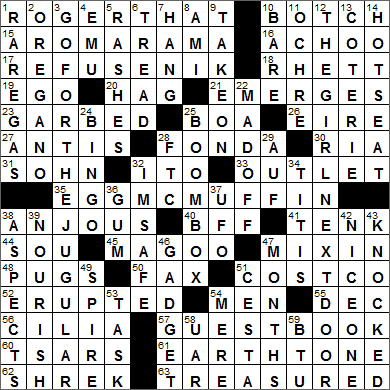 Today’s Wiki-est, Amazonian Googlies
Across
1. “I hear you” : ROGER THAT
The term “roger”, meaning “yes” or “acknowledged”, comes from the world of radiotelephony. The British military used a phonetic alphabet in the fifties that included “Roger” to represent the letter “R”. As such, it became customary to say “Roger” when acknowledging a message, with R (Roger) standing for “received”.

15. Smell-O-Vision competitor of 1950s cinema : AROMARAMA
The idea of introducing appropriate scents into a movie theater in conjunction with a movie’s storyline has been around since 1906. In 1959-1960, the competing approaches of Smell-O-Vision and AromaRama were launched within months of each other. As we now know, the concept did not take off. Over in the UK, the BBC aired an interview with the inventor of “Smellovision”. The man brewed coffee and chopped onions, and many viewers called the BBC to confirm that the aromas had indeed been transmitted via their televisions. The callers were advised to check their calendars, and take note that the date was April 1st …

18. Butler who was expelled from West Point : RHETT
In Margaret Mitchell’s novel “Gone with the Wind”, when Rhett Butler finally walks out on Scarlett O’Hara he utters the words “My dear, I don’t give a damn”. Most of us are more familiar with the slightly different words spoken by Clark Gable in the film adaption of the story: “Frankly, my dear, I don’t give a damn.”

20. Evil Queen’s disguise in “Snow White and Seven Dwarfs” : HAG
“Snow White” is a traditional German fairy tale that was published in 1812 in the collection of the Brothers Grimm. There is also a second, very different Grimms’ Fairy Tale called “Snow-White and Rose-Red”, not to be confused with its more famous cousin. In the latter tale, Snow-White and Rose-Red are sisters who get into trouble with a dwarf, but are rescued by a bear who turns into a prince.

26. Isle named for a Gaelic goddess : EIRE
“Éire” is the Irish name for Ireland, coming from “Ériu”. Ériu was the goddess of Ireland in Irish mythology.

Munich is the capital of the German state of Bavaria, and is the third largest city in the country (after Berlin and Hamburg). The city is called “München” in German, a term that derives from the Old German word for “by the monks’ place”, which is a reference to the monks of the Benedictine order who founded the city in 1158.

32. 1992 Olympic figure skating silver medalist : ITO
Midori Ito is a Japanese figure skater. Ito was the first woman to land a triple/triple jump and a triple axel in competition. In fact she landed her first triple jump in training when she was only 8 years old …

35. Restaurant breakfast innovation of 1971 : EGG MCMUFFIN
The McMuffin breakfast sandwich was introduced, without the knowledge of the corporate office, by the operator of a Santa Barbara, California franchise in 1972. Back then, McDonald’s only offered food for lunch and dinner. The initial reaction of the corporate office on hearing about the McMuffin was to reprimand the Santa Barbara franchise operator, before embracing the concept. Apparently, McMuffins are only offered at breakfast because the grill temperature is different for cooking beef patties and eggs.

38. Alternatives to Bartletts : ANJOUS
The Anjou pear is a cultivar of the European Pear. The Anjou pear is thought to have originated in Belgium or France (Anjou is a province in the Loire Valley of western France).

The Bartlett is the most commonly grown pear outside of Asia, a cultivar of the European pear. Back in the UK, where the Bartlett originated, it is called a Williams Pear, or more completely a Williams’ Bon Chretien (Williams’ good Christian). Several Williams trees were imported to the US in 1799 and planted in Massachusetts. The land on which the trees were planted was eventually bought by one Enoch Bartlett, and he started to distribute the pears and basically introduced the variety to the US. He didn’t know that the pears were called Williams, so he named them after himself!

44. Paltry amount : SOU
A sou is an old French coin. We use the term “sou” to mean “an almost worthless amount”.

45. Squinting cartoon character : MAGOO
Mr. Quincy Magoo is a wonderful cartoon character voiced by Jim Backus. Backus is probably equally well-known for playing Mr. Magoo as well as Thurston Howell, III on “Gilligan’s Island”. Mr. Magoo first appeared on the screen in a short called “The Ragtime Bear” in 1949. His persona was at least in part based on the antics of W. C. Fields. Backus originally used a fake rubber nose that pinched his nostrils in order to create the distinctive voice, although in time he learned to do the voice without the prop. My absolute favorite appearance by Mr. Magoo is in “Mr Magoo’s Christmas Carol”, a true classic from the sixties. There was a movie adaptation of “Mr Magoo” released in 1997, with Leslie Nielsen playing the title role.

48. Curly-tailed dogs : PUGS
The pug is a breed of dog of Chinese origin. Our current family pet is a boxer/pug cross, a good-looking mutt!

54. Esquire’s target audience : MEN
“Esquire” has been around for quite some time, first appearing on newsstands in 1933. The magazine’s circulation really took off in the thirties with the inclusion of pin-up girls painted by Alberto Vargas and George Petty.

55. Advent time: Abbr. : DEC
In the Christian traditions, Advent is the season of expectation prior to the Christmas celebration of the birth of Jesus. The term “Advent” comes from the Latin “adventus” meaning “coming”.

60. Peterhof Palace personages : TSARS
The Peterhof Palace is a magnificent set of palaces and gardens in St. Petersburg, Russia that is justifiably known as the “Russian Versailles”. Peterhof was laid out and constructed on the orders of Tsar Peter the Great. I had the privilege of touring Peterhof a number of years ago, and found the place to be breathtaking, especially the gardens and fountains …

62. Kids’ classic that opens “His mother was ugly and his father was ugly” : SHREK
Before “Shrek” was a successful movie franchise and Broadway musical, it was a children’s picture book called “Shrek!” authored and illustrated by William Steig. The title “Shrek!” came from the German/Yiddish word Schreck, meaning “fear” or “terror”.

Down
1. Noble at the end of a table? : RARE GAS
The rare gases are better known as the noble gases, but neither term is really very accurate. Noble gas might be a better choice though, as they are all relatively nonreactive. But rare they are not. Argon, for example, is a major constituent (1%) of the air that we breathe. The noble gases are the elements on the very right of the periodic table of the elements..

2. Sauce seasoning : OREGANO
Oregano is a perennial herb that is in the mint family. Also known as wild marjoram, oregano is very much associated with the cuisine of southern Italy. Oregano’s popularity surged in the US when soldiers returning from WWII in Europe brought with them an affinity for what they called “the pizza herb”.

3. Attack viciously : GO FOR THE JUGULAR
The jugular veins transport deoxygenated blood from the head back to the heart. There are actually five jugular veins: right and left internal veins, right and left externals, and the anterior. The term “jugular” comes from the Latin “iugulum” meaning “collarbone, throat, neck”.

4. Prey for a dingo : EMU
The dingo is a wild dog of Australia. The dingo is thought to have originated from domesticated dogs that were brought to Australia with humans that settled the land centuries ago.

French artists Pierre-Auguste Renoir and Claude Monet were close friends, and spent the summers of 1873 and 1874 together. Some of the works they produced at that time on the banks of the Seine were clearly painted as they stood side by side.

13. Algonquin Round Table, e.g. : COTERIE
A “coterie” is a small group of friends who hang out together, often sharing a common interest. The term comes to us from French where a coterie was an organization of peasants all of whom held land owned by the same feudal lord.

The Algonquin Round Table was a group of writers, critics and actors who met each day for lunch at New York City’s Algonquin Hotel in the 1920s. My guess is that the most famous “permanent” member of the group was the poet Dorothy Parker. The list of those moving in and out of the circle included Noel Coward and Harpo Marx.

22. Big name in financial fraud : MADOFF
Bernie Madoff is serving a 150-year sentence for having operated what is described as the largest Ponzi scheme in history. Basically Madoff took investor’s money and instead of investing it in the markets as agreed, he put the money into a bank account. He used some of the money he collected from new investors to pay the older investors the anticipated monthly returns. This worked just fine, until too many investors started looking for the return of the original investment. The money was “gone”, paid to new investors (and Madoff), so the whole scheme collapsed.

28. Org. with scam alerts : FTC
The Federal Trade Commission (FTC) was established in 1914 with the mission of protecting consumers. The FTC runs the National Do Not Call Registry which can limit the amount of telemarketing calls that consumers receive. To register your number, simply go to the website www.donotcall.gov.

29. “Ariadne ___ Naxos” : AUF
“Ariadne auf Naxos” is an opera by Richard Wagner that was first performed in 1912 in Stuttgart. The work is structured as an opera within an opera. The prologue shows the backstage activities leading up to the opera itself “Ariadne auf Naxos”, a tale about the goddess Ariadne who has been abandoned on the Greek island of Naxos.

34. South American monkeys : TITIS
Titis are monkeys found in much of South America. Totis have tails that are a little bit longer than the length of their heads and bodies.

49. Burj Khalifa feature : SPIRE
Burj Khalifa is a spectacular skyscraper in Dubai, United Arab Emirates. It is the tallest man-made structure in the world, and has been so since the completion of its exterior in 2009. The space in the building came onto the market at a really bad time, during the global financial crisis. The building was part of a US$20 billion development of downtown Dubai that was backed by the city government which had to go looking for a bailout from the neighboring city of Abu Dhabi. The tower was given the name Burj Khalifa at the last minute, apparently as a nod to the UAE president Khalifa bin Zayed Al Nahyan who helped to broker the bailout.

51. Jai alai basket : CESTA
The essential equipment in the sport of jai alai is the pelota (ball) and the cesta (wicker scoop).

58. Former Mideast org. : UAR
The United Arab Republic (UAR) was a union between Egypt and Syria made in 1958 and dissolved in 1961 when Syria pulled out of the arrangement.

59. Grill measure, in brief : BTU
In the world of heating, ventilation and air conditioning (HVAC), the power of a heating or cooling unit can be measured in British Thermal Units (BTUs). This dated unit is the amount of energy required to heat a pound of water so that the water’s temperature increases by one degree Fahrenheit.