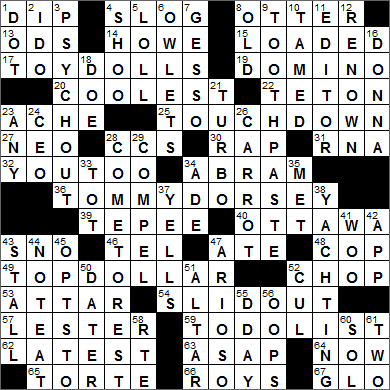 Today’s Wiki-est, Amazonian Googlies
Across
1. Guacamole, e.g. : DIP
Guacamole is one of my favorite dishes, and is made by mashing avocados and perhaps adding the likes of tomato, onion and lime juice. The guacamole recipe dates back as early as the 16th century, to the time of the Aztecs. “Guacamole” translates as “avocado sauce”.

14. Gordie ___ a.k.a. Mr. Hockey : HOWE
Gordie Howe is a retired Canadian hockey player. Regarded as one of the games greatest players, Howe is sometimes referred to as “Mr Hockey”. He is the only hockey player to have competed in the NHL for five decades (from the forties through the eighties).

17. Barbies, e.g. : TOY DOLLS
The famous Barbie doll was created by businesswoman Ruth Handler and first appeared on store shelves in 1959. Barbie was based on a German fashion doll called Bild Lilli that was introduced in 1955. Lilli had been a German cartoon character before taking on a three-dimensional form. Prior to the introduction of Bild Lilli and Barbie, children’s dolls were primarily representations of infants.

22. Wyoming’s Grand ___ mountain : TETON
Grand Teton National Park is located just south of Yellowstone NP, and a must-see if you are visiting the latter. The park is named after the tallest peak in the magnificent Teton Range known as Grand Teton. The origins of the name “Teton” is not very clear, although my one story is that it was named by French trappers, as the word “tetons” in French is a slang term meaning “breasts”.

28. IV units : CCS
Fluids in an IV (intravenous drip) might be measured in ccs (cubic centimeters).

30. Kanye West’s genre : RAP
Kanye West is a rap singer who was born in Atlanta and raised in Chicago. He also spent some time in Nanjing, China as a child, where his mother was teaching as part of an exchange program. West is married to reality star Kim Kardashian.

31. Genetic carrier : RNA
Ribonucleic Acid (RNA) is an essential catalyst in the manufacture of proteins in the body. The genetic code in DNA determines the sequence of amino acids that make up each protein. That sequence is read in DNA by messenger RNA, and amino acids are delivered for protein manufacture in the correct sequence by what is called transfer RNA. The amino acids are then formed into proteins by ribosomal RNA.

34. The “A” in James A. Garfield : ABRAM
President James Abram Garfield was born in Orange Township in Ohio, the youngest son of Abram Garfield. Abram had moved from New York to Ohio specifically to court his childhood sweetheart Mehitabel Ballou. When Abram arrived in Ohio, however, he found that Mehitabel had already married. Abram did manage to join the Ballou family though, as he eventually married Mehitabel’s sister Eliza.

36. Big band trombonist : TOMMY DORSEY
Tommy Dorsey was a jazz trombonist and bandleader in the Big Band era, and the younger brother of bandleader Jimmy Dorsey. One of Tommy’s singers was Frank Sinatra, whom he hired from bandleader Harry James in 1940. Sinatra claimed that he learned breath control from watching Tommy Dorsey play the trombone.

39. Conical home for a Plains Indian : TEPEE
A tepee (also written as “tipi” and “teepee”) is a cone-shaped tent traditionally made from animal hides that is used by the Great Plains Native Americans. A wigwam is a completely different structure and is often a misnomer for a tepee. A wigwam is a domed structure built by Native Americans in the West and Southwest, intended to be a more permanent dwelling. The wigwam can also be covered with hides but more often was covered with grass, reeds, brush or cloth.

40. Canada’s capital : OTTAWA
The Ottawa River takes its name from the Odawa people, an Algonquin nation. The city of Ottawa changed its name to that of the river, from Bytown in 1855. The original townsite was called Bytown after Captain John By who completed the Rideau Canal that runs from Kingston on Lake Ontario to present-day Ottawa.

47. Chowed down : ATE
“Chow” is an American slang term for food that originated in California in the mid-1800s. “Chow” comes from the Chinese pidgin English “chow-chow” meaning “food”.

53. Rose oil : ATTAR
Attar is a fragrant essential oil obtained from flowers, and the term often particularly refers to attar of roses.

57. Newsman Holt : LESTER
Lester Holt is a television journalist. Holt is anchor for the weekend editions of the shows “Today” and “Nightly News” on NBC, as well as the show “Dateline NBC”.

65. Linzer ___ (pastry) : TORTE
A Linzer Torte is a torte with a lattice design on the top of the pastry. The torte is named for the Austrian city of Linz.

66. Artist Lichtenstein and others : ROYS
Roy Lichtenstein was a pop artist from New York City, a contemporary of Andy Warhol. Lichtenstein was famous for his “cartoon-strip” paintings, especially works called “Whaam!” and “Drowning Girl”. If you saw the Ben Stiller film “Night at the Museum: Battle of the Smithsonian”, you might remember Lichtenstein’s painting “Crying Girl” coming to life as part of the plot.

67. Day-___ paint : GLO
“Dayglo” is a registered trademark used for an ink or paint that glows when exposed to a black light in a darkened room. When Dayglo paint is viewed in daylight the colors can look particularly vivid because they respond to the UV light that is present in sunlight.

Down
7. Artist’s base : GESSO
Gesso is the Italian word for “chalk” and gives its name to the powdered calcium carbonate that is used as a primer coat under artistic panel paintings. The gesso is mixed with a glue and applied to wood so that it acts as an absorbent surface for paint.

9. Aim or Crest : TOOTHPASTE
The Aim brand of toothpaste was introduced in 1975 by Unilever. The brand was purchased by Church & Dwight in 2003.

Crest is a Procter and Gamble brand of toothpaste that was introduced in 1953.

18. Mother of a fawn : DOE
A fawn is a young deer, usually less than a year old.

21. Certain jet engine : TURBO
Turbofans and turbojets are types of aircraft engine. Turbofan engines are quite common on large passenger aircraft. Turbojet engines are more efficient at speeds higher than Mach 2, so are more likely to be found on something like a cruise missile.

35. Big Apple opera lover’s destination, with “the” : MET
The Metropolitan Opera (often “the Met”) of New York City is the largest classical music organization in the country, presenting about 220 performances each and every year. Founded in 1880, the Met is renowned for using technology to expand its audiences. Performances have been broadcast live on radio since 1931, and on television since 1977. And since 2006 you can go see a live performance from New York in high definition on the big screen, at a movie theater near you …

38. America’s Cup sport : YACHTING
The America’s Cup is a trophy that has been awarded for yacht racing since 1851. It was first presented to the winner of a race around the Isle of Wight in England that was won by a schooner called “America”. The trophy was eventually renamed to “the America’s Cup” in honor of that first race winner.

42. Pokémon Go, e.g. : APP
“Pokémon GO” is a reality-based video game in which players must locate, capture, battle and train virtual creatures known as Pokémon. The Pokémon are hidden in the real world, in the sense that they have to be located on an electronic device (like a smartphone) in “the real world”, for which a GPS location is needed. Players see the Pokémon overlaid on a view of the real world on their smart device.

43. Conk out, as an engine : STALL
The phrase “conk out” was coined by airmen during WWI, and was used to describe the stalling of an engine.

47. Melodic : ARIOSO
The adjective “arioso” means “melodic, in the style of an aria”.

50. One doing carbon 14 testing : DATER
Carbon-14 is a radioactive isotope of carbon that is found in nature in small amounts Carbon-14 is used in the technique known as radiocarbon dating, a relatively accurate way of determining the age of something up to about 60,000 years old. When an organism is alive, the amount of radioactive carbon-14 it has compared to the amount of regular carbon-12, is a fixed ratio. After the organism dies, it is no longer exchanging carbon with the atmosphere through metabolism. So, the stable carbon-12 stays in the body as it rots but the radioactive carbon-14 gradually decays, causing the ratio of carbon-14 to carbon-12 to fall. Scientists can determine the age of remains by measuring this carbon-14/carbon-12 ratio.

52. ___-de-sac : CUL
Even though “cul-de-sac” can indeed mean “bottom of the bag” in French, the term cul-de-sac is of English origin (the use of “cul” in French is actually quite rude). The term was introduced in aristocratic circles at a time when it was considered very fashionable to speak French. Dead-end streets in France are usually signposted with just a symbol and no accompanying words, but if words are included they are “voie sans issue”, meaning “way without exit”.

55. Attack time in W.W. II : D-DAY
The most famous D-Day in history was June 6, 1944, the date of the Normandy landings in WWII. The term “D-Day” is used by the military to designate the day on which a combat operations are to be launched, especially when the actual date has yet to be determined. What D stands for seems to have been lost in the mists of time although the tradition is that D just stands for “Day”. In fact, the French have a similar term, “Jour J” (Day J), with a similar meaning. We also use H-Hour to denote the hour the attack is to commence.

61. Requirement for a tango : TWO
It takes two to tango …