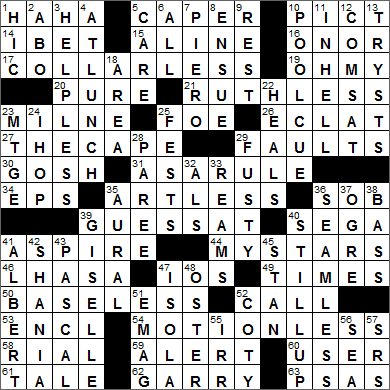 CROSSWORD SETTER: Paula Gamache
THEME: Clueless
Each of today’s themed answers is a word with the suffix “-LESS”, and is clued with a punny interpretation. What the …?

Today’s Wiki-est, Amazonian Googlies
Across
5. Pickled garnish : CAPER
The seasoning we know as “capers” are the edible flower buds of the caper bush, also known as Flinders rose. By the time we get them in a jar, the buds have been pickled and salted. I’m not a huge fan of capers …

10. Briton of old : PICT
The Picts were a Celtic people who lived in ancient Scotland, in the east and north of the country. The Picts gradually disappeared as an identifiable group, merging with the Gaels in the 10th century.

21. What the 1920s Yankees didn’t want to be? : RUTHLESS
Baseball legend George Herman Ruth, Jr. had several nicknames, the best known being “Babe”. He was also called “the Bambino” and “the Sultan of Swat”.

26. Sparkling effect : ECLAT
“Éclat” can mean a brilliant show of success, or the applause or accolade that one receives. The word derives from the French “éclater” meaning “to splinter, burst out”.

27. Martha’s Vineyard alternative : THE CAPE
Cape Cod is indeed named after the fish. It was first called Cape Cod by English navigator Bartholomew Gosnold in 1602 as his men caught so many fish there.

Martha’s Vineyard is a relatively large island located south of Cape Cod in Massachusetts. “Martha’s Vineyard” was originally the name of a smaller island to the south, named by English explorer Bartholomew Gosnold in 1602. The name was eventually transferred to the main island, and is now the eighth-oldest English place-name still used in the US. It is likely that the Gosnold named the island for his daughter Martha.

34. Short albums, for short : EPS
An extended play record (EP) contains more music than a single, but less than an LP.

35. What the museum curator didn’t want to be? : ARTLESS
The term “curator” is Latin and applies to a manager, guardian or overseer. In English, the original curators were the guardians and overseers of minors and those with mental disease.

40. Onetime Nintendo rival : SEGA
Sega is a Japanese videogame company headquartered in Tokyo. Sega actually started out 1940 in the US as Standard Games and was located in Honolulu, Hawaii. The owners moved the operation to Tokyo in 1951 and renamed the company to Service Games. The name “Sega” is a combination of the first two letters of the words “Se-rvice” and “Ga-mes”.

46. Tibetan capital : LHASA
Lhasa is the capital city of Tibet, and the name “Lhasa” translates as “place of the gods”. However, Lhasa used to be called Rasa, a name that translates into the less auspicious “goat’s place”. Lhasa was also once called the “Forbidden City” due to its inaccessible location high in the Himalayas and a traditional hostility exhibited by residents to outsiders. The “forbidden” nature of the city has been reinforced since the Chinese took over Tibet in the early 1950s as it has been difficult for foreigners to get permission to visit Lhasa.

50. What the G.I. didn’t want to be? : BASELESS
The initials “G.I.” stand for “Government Issue” and not “General Infantry” as is often believed. GI was first used in the military to denote equipment made from Galvanized Iron and during WWI, incoming German shells were nicknamed “GI cans”. Soon after, the term GI came to be associated with “Government Issue” and eventually became an adjective to describe anything associated with the Army.

58. Mideast money : RIAL
“Rial” is the name of the currency of Iran (as well as Yemen, Oman, Cambodia and Tunisia).

61. Chaucer offering : TALE
Geoffrey Chaucer was an English author. He is often referred to as the father of English literature because he established vernacular English as a legitimate language for artistic works, as up to that point authors used French or Latin. Chaucer’s most famous work is actually unfinished, a collection of stories called “The Canterbury Tales”, all written at the end of the 14th century.

62. Cartoonist Trudeau : GARRY
When cartoonist Garry Trudeau was deciding on a name for his comic strip in 1970, he opted for “Doonesbury”. He combined “doone”, which is slang for a “genial fool”, and the last syllables in “Pillsbury”, the family name of Trudeau’s roommate while he was at Yale.

Down
1. Sot’s sound : HIC!
Our word “sot” comes from the Old English “sott”, meaning “fool”. The word “sot” started to be associated with alcohol and not just foolery in the late 1500s.

2. Blood-typing letters : ABO
The most important grouping of blood types is the ABO system. Blood is classified as either A, B, AB or O, depending on the type of antigens on the surface of the red blood cells. A secondary designation of blood is the Rh factor, in which other antigens are labelled as either positive or negative. When a patient receives a blood transfusion, ideally the donor blood should be the same type as that of the recipient, as incompatible blood cells can be rejected. However, blood type O-neg can be accepted by recipients with all blood types, A, B, AB or O, and positive or negative. Hence someone with O-neg blood type is called a “universal donor”.

7. Painter ___ di Cosimo : PIERO
Piero di Cosimo was a painter during the Italian Renaissance from Florence. Piero trained under the artist Cosimo Rosselli, who is most famous for painting frescos in the Sistine Chapel in Rome. Piero eventually married Cosimo’s daughter.

13. Assignations : TRYSTS
In its most general sense, a tryst is a meeting at an agreed time and place. More usually we consider a tryst to be a prearranged meeting between lovers. The term comes from the Old French “triste”, a waiting place designated when hunting.

23. Part of F.N.M.A.: Abbr. : MTGE
The Federal National Mortgage Association is commonly called Fannie Mae, a play on the initialism FNMA. Fannie Mae was founded in during the Great Depression as part of President Roosevelt’s New Deal.

Denny’s was the first restaurant I ate at on my initial visit to the US over 30 years ago. I thought I was in heaven. I’ve changed my opinion a little since then! Denny’s is famous for being “always open” (almost), something that blew my mind as a visitor from Ireland back in 1980. Denny’s was founded in 1953 in Lakewood, California, and originally went by the name “Denny’s Donuts”.

29. Rigidly old-fashioned : FUSTY
Our word “fusty” means “musty, stale-smelling”. The term comes into English from French via the word “fusté” meaning “tasting of the cask”, which in turn comes from the Old French “fuist”, the word for a wine cask. The definition has been extended to describe something that is stale, out-of-date, stubbornly old-fashioned.

32. Lou Gehrig’s disease, for short : ALS
Baseball legend Lou Gehrig was known as a powerhouse. He was a big hitter and just kept on playing. Gehrig broke the record for the most consecutive number of games played, and he stills holds the record for the most career grand slams. His durability earned him the nickname “The Iron Horse”. Sadly, he died in 1941 at 37-years-old suffering from amyotrophic lateral sclerosis (ALS), an illness we now call “Lou Gehrig’s Disease”. The New Yankees retired the number four on 4th of July 1939 in his honor, making Lou Gehrig the first baseball player to have a number retired.

33. Bawls (out) : REAMS
I must admit that I find the slang term “to ream out”, with its meaning “to scold harshly”, to be quite distasteful. The usage of the word as a reprimand dates back to about 1950.

39. Princess in Disney’s “Enchanted” : GISELLE
“Enchanted” is actually quite an entertaining Disney film, the story of the Princess Giselle who is forced from her animated world to live in the real world of New York City.

41. Queen Victoria’s husband : ALBERT
Prince Albert of Saxe-Coburg and Gotha met his future wife Victoria before she had ascended to the British throne. It was after Victoria became queen that she proposed to Albert, and the couple married in 1840.

42. “Any Man of Mine” singer Twain : SHANIA
Shania Twain is a Country and pop singer from Windsor, Ontario. Shania’s birth name was Eileen Edwards, and this changed to Eilleen Twain when her mother remarried. Twain changed her name to Shania in the early 1990s, around the same time that her musical career started to take off.

43. French mathematician Blaise : PASCAL
Blaise Pascal was an important French mathematician, physicist and philosopher, who lived in the mid-1600s. In math, his name was given to Pascal’s triangle, a triangle of numbers in which each number is the sum of the two numbers above it. Pascal also wrote on the subject of theology. His most important theological writings were published after his death under the title “Pensées”, meaning “Thoughts”.

45. Tennis great Smith : STAN
Stan Smith is a former professional tennis player who was particularly successful as a doubles player with partner Bob Lutz. The Adidas Stan Smith tennis shoe has been selling well since 1971.

48. Blender maker : OSTER
The Oster brand of small appliances was introduced in 1924 by John Oster. He started out by making manually-powered hair clippers designed for cutting women’s hair, and followed up with a motorized version in 1928. The clippers kept the company in business until 1946 when Oster diversified, buying a manufacturer of liquefying blenders in 1946. The blender was renamed an Osterizer, and was a big hit. Oster was bought up by Sunbeam, which has owned the brand since 1960.

52. Big name in perfumery : COTY
Coty is a producer of beauty products that was founded in 1904 in Paris.