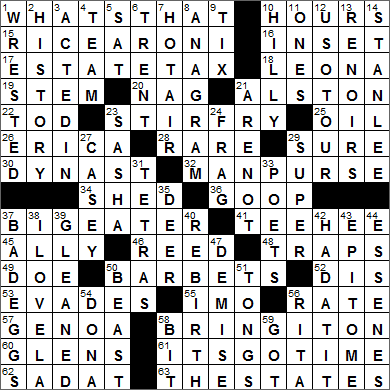 Today’s Wiki-est, Amazonian Googlies
Across
15. Brand whose first commercial featured a cable car : RICE-A-RONI
Rice-a-Roni was introduced in 1958 by the Golden Grain Macaroni Company of San Francisco. The company was run by an Italian immigrant and his four sons. The wife of one of the sons created a pilaf dish for the family diner they owned. It was a big hit, so her brother-in-law created a commercial version by blending dry chicken soup mix with rice and macaroni. Sounds like “a San Francisco treat” to me …

19. Non-humanities acronym : STEM
The acronym STEM stands for the disciplines of science, technology, engineering and mathematics. An alternative acronym with a similar meaning is MINT, standing for mathematics, information sciences, natural sciences and technology.

21. Walter ___, Dodgers manager before Tommy Lasorda : ALSTON
Walter “Smokey” Alston was the very successful manager of the Brooklyn/Los Angeles Dodgers from 1954 to 1976. Alston was not very successful as a player. He played as first baseman for the St. Louis Cardinals but only for one season and in only one game, in 1936. Alston had only one at bat and he struck out, on three pitches.

22. “The Fox and the Hound” fox : TOD
Disney’s 1981 animated feature “The Fox and the Hound” is based on a novel of the same name by Daniel P. Mannix. Both the novel and movie tell the tale of a young fox and a young hound who are good friends. The fox and hound struggle to maintain their friendship as they grow older, even as their animal instincts kick in and social pressures demand that they become adversaries. Heavy stuff!

26. Emmy-winning Susan Lucci role : ERICA
Susan Lucci is perhaps the most famous actor associated with daytime soap operas, and was the highest paid actor in daytime television. Lucci was nominated for a Daytime Emmy Award as Outstanding Lead Actress in a Drama Series an incredible 21 times for her portrayal of Erica Kane, the vixen in “All My Children”.

28. “On the hoof,” in diner lingo : RARE
Diner lingo, the verbal slang used by the staff, can be very colorful. Here are a few examples:

30. Kim Jong-un, for one : DYNAST
North Korean leader Kim Jong-un has a lengthy list of official titles, including:

32. Gendered “Seinfeld” accessory : MAN PURSE
In the “Seinfeld” episode called “The Reverse Peephole”, Jerry famously starts to use a “European Carryall”, which in actual fact is just a purse.

49. Federal div. concerned with gas consumption : DOE
The US Department of Energy (DOE) came into being largely as a result of the 1973 oil crisis. The DOE was founded in 1977 by the Carter administration. The DOE is responsible for regulating the production of nuclear power, and it is also responsible for the nation’s nuclear weapons. The official DOE seal features symbols denoting five sources of energy: the sun, an atom, an oil derrick, a windmill and a dynamo.

52. Burn : DIS
“Dis” is a slang term meaning “insult” that originated in the eighties. It is a shortened form of “disrespect” or “dismiss”.

56. Give a Yelp review, say : RATE
yelp.com is a website that provides a local business directory and reviews of services. The site is sort of like Yellow Pages on steroids, and the term “yelp” is derived from “yel-low p-ages”.

57. Hometown of Columbus : GENOA
Genoa is a seaport in the very north of Italy, in the region known as Liguria. One of Genoa’s most famous sons was Christopher Columbus. Another was the violinist Niccolò Paganini.

62. Yom Kippur War leader : SADAT
Anwar Sadat was the third President of Egypt right up to the time of his assassination in 1981. Sadat won the Nobel Peace Prize in 1978 along with Israeli Prime Minister Menachem Begin for the role played in crafting the Israel-Egypt Peace Treaty of 1978 at Camp David. It was this agreement that largely led to Sadat’s assassination three years later.

The Yom Kippur War started on October 6 in 1973 with a surprise move by Syria and Egypt into the Sinai Peninsula and the Golan Heights. The conflict quickly escalated into a confrontation between the US and the Soviet Union, as both superpowers rushed arms to the opposing states. Within a week, Israeli forces had regained the land that had been lost and two weeks later had advanced within striking range of both Cairo and Damascus. A UN brokered ceasefire brought the war to an end on October 25, after just 19 days of fighting.

Down
1. Took by force : WRESTED
The verb “to wrest” can mean to obtain by violent twisting and pulling. The word “wrest” derives from the Middle English “wresten” meaning “to twist”. Our word “wrestling” has the same etymology.

5. Sr. stress source : SAT
Today the standardized test for admission to colleges is known as the SAT Reasoning Test, but it used to be called the Scholastic Aptitude Test and Scholastic Assessment Test, which led to the abbreviation SAT.

6. Reznor of Nine Inch Nails : TRENT
Nine Inch Nails is a rock band that was founded in Cleveland, Ohio in 1988 by singer-songwriter Trent Reznor. Reznor chose the name “Nine Inch Nails” mainly because it abbreviated easily and succinctly, to “NIN”.

8. On end, to Donne : ANAGRAM
John Donne is one of England’s most celebrated poets, working at the start of the 17th century. He spent much of his life in poverty and even spent a short time in prison for having married his wife without procuring the appropriate permissions. After his release, his wife bore him 12 children in 16 years, passing away a few days after the twelfth child was born.

12. Entertainment for general audiences? : USO TOUR
The United Service Organization (USO) was founded in 1941 at the request of FDR “to handle the on-leave recreation of the men in the armed forces”. A USO tour is undertaken by a troupe of entertainers, many of whom are big-name celebrities. A USO tour usually includes troop locations in combat zones.

13. Collection at the Musée d’Orsay : RENOIRS
Pierre-Auguste Renoir was a French painter, very much at the forefront of the Impressionist Movement. Renoir was a prolific artist, with several thousand works attributed to him. The largest collection of Renoirs is actually in the United States. You can see 181 of his paintings at the Barnes Foundation just outside Philadelphia.

The Musée d’Orsay is one of the premier museums in Paris, and holds the world’s largest collection of impressionist art. It is a truly beautiful building, a former Beaux-Arts railway station.

14. Nonactor with cameos in more than 20 Marvel movies : STAN LEE
Stan Lee did just about everything at Marvel Comics over the years, from writing to being president and chairman of the board. If you like superhero movies based on the characters from Marvel Comics, then you could spend a few hours trying to spot Stan Lee in those films as he has a penchant for making cameo appearances. Lee can be spotted in “X-Men” (2000), “Spider-Man” (2002), “Hulk” (2003), “Fantastic Four” (2005), “Iron Man” (2008) and many other films.

23. ___ Fierce (onetime Beyoncé alter ego) : SASHA
Sasha Fierce is an alter-ego that Beyoncé Knowles has developed for her stage and recording work. Beyoncé describes Sasha as very sensual and aggressive. She released a studio album called “I Am… Sasha Fierce” in 2008.

27. Batman? : CASEY
“Casey at the Bat” is a poem written in 1888 by Ernest Thayer, first published in the San Francisco Examiner. The poem became very popular due to repeated live performances in vaudeville by DeWolf Hopper. Casey played for the Mudville Nine, and the last line of the poem is “But there is no joy in Mudville – mighty Casey has struck out.”

31. Aquarium fish : TETRAS
The neon tetra is a freshwater fish, native to parts of South America. The tetra is a very popular aquarium fish and millions are imported into the US every year. Almost all of the imported tetras are farm-raised in Asia and very few come from their native continent.

38. Song that starts “Hate New York City / It’s cold and it’s damp” : I LOVE LA
“I Love L.A.” is a song written and recorded by Randy Newman in 1983. The song is played at major sporting events in the city, after the home team scores or wins.

43. Model : EPITOME
The more common meaning of “epitome” is a perfect example of a group, quality, type etc. An “epitome” is also an abstract or summary of a book or article.

44. Early Judaic sect : ESSENES
The Essenes were a Jewish religious group, most noted these days perhaps as the writers of the Dead Sea Scrolls.

51. They may grab a bite : TONGS
A pair of tongs is a tool with a scissor-like hinge used to pick up things, like meat cooking on a barbecue grill or ice from an ice bucket. The verb “to tong” means “to handle with tongs”.

54. Lisbon lady : DONA
In Portugal, a title of respect for men is “Dom”. The equivalent female title is “Dona”.

56. Beatles title girl with a “little white book” : RITA
“Lovely Rita” is a Beatles song on the “Sgt. Pepper’s Lonely Hearts Club Band” album. When the album was released in 1967, the term “meter maid” wasn’t used in the UK, although it was a slang term used in the US. The song helped spread the usage of “meter maid” all around the English-speaking world. Apparently the inspiration for the song was McCartney getting a parking ticket one day outside the Abbey Road Studios. He accepted the ticket with good grace, from a warden named Meta Davis. McCartney felt that Meta “looked like a Rita”, so that was the name she was given in the song.