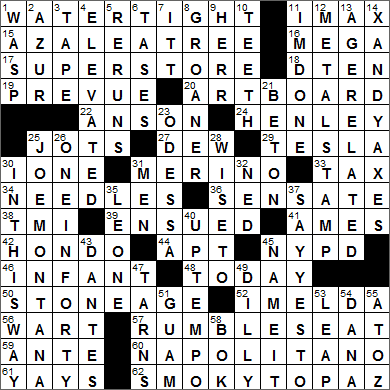 Today’s Wiki-est, Amazonian Googlies
Across
11. Tall tale producer? : IMAX
The IMAX Corporation, which is behind the IMAX film format, is a Canadian company. The impetus for developing the system came after Expo ’67 in Montreal. Back then large format screenings were accomplished using multiple projectors with multiple screens, with images basically stitched together. The team behind the IMAX technology set out to simplify things, and developed a single-camera, single-projector system.

15. Colorful ornamental with a trunk : AZALEA TREE
Azaleas are very toxic to horses, sheep and goats, but strangely enough cause no problem for cats or dogs. And if you go to Korea you might come across “Tug Yonju”, which is azalea wine made from the plant’s blossoms. Azaleas are usually grown as shrubs, but are also seen as small trees, and often indoors.

18. Battleship guess : D-TEN
Battleship was a game that we used to play as kids using pencil and paper. The game had been around at least since WWI, and was eventually turned into a board game by Milton Bradley in 1967.

22. ___ Williams, Potsie player on “Happy Days” : ANSON
Anson Williams played the lovable Warren “Potsie” Weber character on “Happy Days”. After “Happy Days” finished its run, Williams moved into directing and has directed episodes of “Star Trek: Deep Space Nine”, “Xena: Warrior Princess”, “Sabrina the Teenage Witch”, “Melrose Place”, “Beverly Hills 90210” and other shows. But Williams’ true claim to fame has to be that he is the second cousin of Dr. Henry Heimlich, who invented the Heimlich Maneuver!

24. ___-on-Thames (regatta site) : HENLEY
The Henley Regatta is a rowing competition that has been held every year since 1839 on the River Thames near the town of Henley-on-Thames.

29. Subject of the biography “Lightning in His Hand” : TESLA
Nikola Tesla was born in Serbia, but later moved to the US. Tesla’s work on mechanical and electrical engineering was crucial to the development of alternating current technology, the same technology that is used by equipment at the backbone of modern power generation and distribution systems.

30. Girl’s name in which the last three letters are equivalent to the first? : IONE
The “I” and “ONE” in the name “Ione” might be said to be equivalent, both being the number one.

31. Quality wool source : MERINO
The Merino breed of sheep is prized for the soft quality of its wool.

41. Hawkeye State city : AMES
The Iowa city of Ames was founded as a stop on the Cedar Rapids and Missouri Railroad in 1864. It was named for US Congressman Oakes Ames from the state of Massachusetts in honor of the role that Ames played in the building of the transcontinental railroad.

42. John Wayne title role : HONDO
The 1953 western movie “Hondo” stars John Wayne and is based on the novel “The Gift of Cochise”, written by Louis L’Amour.

45. Washington Sq. Park squad : NYPD
Washington Square Park in New York City is largely surrounded by buildings belonging to New York University. The park’s most prominent feature in the park is the magnificent Washington Square Arch, a triumphal marble arch erected in 1892 to celebrate the centennial of George Washington’s inauguration as the nation’s first president in 1789.

52. Marcos of the Philippines : IMELDA
Many moons ago I spent a couple of very happy years living in Manila in the Philippines. I had an apartment there, and residing in the apartment building next door was Imelda Marcos, along with all of her shoes I assume …

57. Old-fashioned auto feature : RUMBLE SEAT
A rumble seat is an exterior seat found in pre-WWII cars that opens out from the rear of the vehicle. Back in the 1800s, a “rumble” was a seat in the rear of a carriage that was used by servants. A car’s rumble seat was also called a “mother-in-law seat”.

60. Obama’s first Homeland Security secretary : NAPOLITANO
Janet Napolitano served as Governor of Arizona from 1003 until 2009 before being tapped by President Obama as Secretary of Homeland Security, an office that she held until 2013. After leaving Washington, Napolitano became President of the University of California.

62. Dark brown quartz sometimes sold as a gemstone : SMOKY TOPAZ
Apparently there is no such gemstone as “smoky topaz”. Instead, some less than reputable dealers sell the attractive but inexpensive “smoky quartz” using the topaz name to get a premium price.

Down
2. Like la mer : AZUR
I think that this clue is a little off. In French, “la mer” (the sea, a feminine noun) is “azure” (azure-colored). “Azur” is the spelling used with masculine nouns. The confusion might come from the phrase “Côte d’Azur”, which describes part of the French Mediterranean coast.

The word “azure” came into English from Persian via Old French. The French word “l’azur” was taken from the Persian name for a place in northeastern Afghanistan called “Lazhward” which was the main source of the semi-precious stone lapis lazuli. The stone has a vivid blue color, and “azure” has been describing this color since the 14th century.

The Côte d’Azur is on the Mediterranean coast of France and stretches from Saint Tropez in the west and to the Italian border in the east. In English we often refer to the area as the French Riviera. It’s a little crowded for me (okay, “expensive”), especially in the summer.

5. Most TV Land programming : RERUNS
TV Land is a cable television channel that debuted in 1996. “TV Land” is a name that was used by Nick at Nite in the eighties, and is a term originally coined by “The Rocky and Bullwinkle Show”.

7. Education’s ___ Tech : ITT
ITT Technical Institute is a private educational establishment with over 130 campuses all over the US.

23. Frederick Forsyth thriller “The ___ File” : ODESSA
“The Odessa File” is a 1972 novel by English author Frederick Forsyth. The novel is a real thriller, set in the sixties, involving the hunt for a former SS concentration camp commander. There is a 1974 movie adaption that has the same title, starring Jon Voight and Maximilian Schell.

25. Four-for-four Super Bowl-winning QB : JOE MONTANA
Joe Montana played most of his NFL career with the San Francisco 49ers, and the last two seasons with the Kansas City Chiefs. With the 49ers, Montana went to the Super Bowl four times, winning every time. In retirement one of his activities is to produce wine, so keep an eye out for his “Montagia” label.

31. All the suspects in “The Usual Suspects” : MEN
“The Usual Suspects” is somewhat of a cult film now, released in 1995. The cast is amazing, including Gabriel Byrne, Benicio Del Toro, Kevin Pollak and Kevin Spacey. The title comes from one of the most memorable lines in movie history, from the film “Casablanca”. The Claude Rains character, Major Renault, pronounces, “Major Strasser has been shot. Round up the usual suspects.”

35. Currency in Freetown : LEONE
Leones are the currency of Sierra Leone. The Leone was introduced in 1964 to replace the British West African pound. The move was a practical one, as the Leone is a decimal currency and replaces the old British system of pounds, shillings and pence.

The Republic of Sierra Leone is a country in West Africa, lying on the Atlantic Coast. The capital city of Freetown was originally set up as a colony to house the “Black Poor” of London, England. These people were mainly freed British slaves of Caribbean descent who were living a miserable life in the run-down parts of London. Perhaps to help the impoverished souls, perhaps to rid the streets of “a problem”, three ships were chartered in 1787 to transport a group of blacks, with some whites, to a piece of land purchased in Sierra Leone. Those who made the voyage were guaranteed British citizenship and protection. The descendants of these immigrants, and others who made the journey over the next 60 years, make up the ethnic group that’s today called the Sierra Leone Creole.

47. Mountain lakes : TARNS
A tarn is a mountain lake that has been formed by glacial excavation.

49. Lollapalooza : DILLY
A “lollapalooza” is something outstanding, one of a kind, as is a “dilly”.

51. 53rd “state quarter” locale : GUAM
Guam is a US territory in the western Pacific Ocean, the largest of the Mariana Islands. Guam is also the first territory in the United States to see the sun rise on any particular day. As such, the territory has adopted the motto, “Where America’s day begins”. During WWII, the US territory of Guam was occupied by the Japanese for 31 months until it was liberated in the Battle of Guam in July 1944. Of the 18,000 Japanese men holding the island, only 485 surrendered, so almost all perished in the invasion. One Japanese sergeant hid out on the island for an incredible 28 years, finally surrendering in 1972!

54. “Two Years Before the Mast” author : DANA
Richard Henry Dana, Jr. is an author whose most famous title is “Two years Before the Mast”, an 1840 book that tells the story of a two-year sea voyage that Dana took starting in 1834. The journey took Dana from Boston around Cape Horn to California, and back again.

58. ___ Tower Gardens, National Historic Landmark in Florida : BOK
Bok Tower Gardens is a garden and bird sanctuary in Florida. The property was developed by Edward W. Bok, editor of the women’s magazine “Ladies Home Journal”, hence the “Bok” in the name. The centerpiece of the gardens is a magnificent Singing Tower, a 205-foot tall bell tower containing sixty bells. The Bok Tower Gardens were dedicated in 1929 by President Calvin Coolidge. Edward W. Bok died one year later, and is interred at the base of the tower.