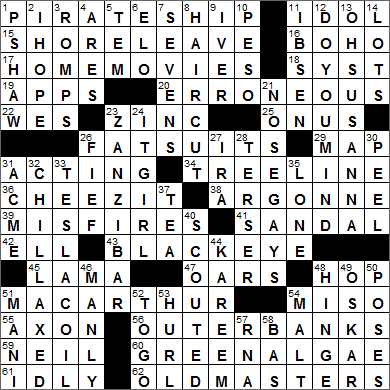 Today’s Wiki-est, Amazonian Googlies
Across
1. One might have black-and-white standards : PIRATE SHIP
The Jolly Roger is a flag that was flown by pirates to identify their vessels, basically to strike fear in the hearts of the crews they were attacking. We usually think of the Jolly Roger’s design as a white skull and crossbones on a black background. There is a theory that pirates originally flew a red flag, and this was known colloquially as the “pretty red”, or “joli rouge” in French. “Joli Rouge” then evolved into “Jolly Roger”.

16. Unconventional and hippielike, informally : BOHO
“Boho” is short for “Bohemian”.

Bohemia covers most of the Czech Republic. Centuries ago, it was wrongly believed that gypsies came from Bohemia, giving rise to the term “Bohemian” meaning a “gypsy of society”.

23. More than a fraction of a cent : ZINC
The original one-cent coin was introduced in the US in 1793 and was made of 100% copper. The composition varied over time, and was 100% bronze up to the 1940s. During WWII there was a shortage of copper to make bronze, so the US Mint switched to zinc-coated steel for production of one-cent coins in 1943. The steelie is the only coin ever issued by the US mint that can be picked up by a magnet. Today’s one-cent coin is comprised mainly of zinc.

26. Outfits for big parts? : FAT SUITS
An actor might wear a “fat suit” for a part, an undergarment that is designed to thicken the outer appearance.

-Acting is the most minor of gifts and not a very high-class way to earn a living. After all, Shirley Temple could do it at the age of four.
-Acting is the perfect idiot’s profession.
-It’s a business you go into because you’re an egocentric. It’s a very embarrassing profession.

36. Orange snack in a red box : CHEEZ-IT
Cheez-it crackers were introduced way back in 1921, first sold by the Green & Green Company of Dayton, Ohio.

38. Where the Lost Battalion got lost : ARGONNE
The Meuse-Argonne Offensive (also called the Battle of the Argonne Forest) was an Allied offensive along the entire western front that took place in the last few weeks of WWI. Fought by US and French forces against the Germans, the offensive was the biggest operation launched by the American Expeditionary Force in WWI. The Meuse-Argonne was the deadliest battle in US history, as 26,277 US soldiers lost their lives.

The Lost Battalion was a large force of American soldiers who found themselves surrounded by the enemy during an attack in the Argonne Forest during WWI. The group consisted of just over 550 men, of which almost 200 were killed in action, 150 went missing in action or were captured, and just under 200 were eventually rescued.

45. Religious figure from on high? : LAMA
“Lama” is a Tibetan word, meaning “chief” or “high priest”.

51. One of 20-30 “genius grants” awarded annually : MACARTHUR
John D. and Catherine T. MacArthur Foundation awards a MacArthur Fellowship to 20-30 individuals annually who show extraordinary originality and dedication in their field. The amount of the prize is $625,000, and it can be awarded in any field and has “no strings attached”. The MacArthur Fellowship is sometimes referred to as the “Genius Grant”.

54. ___ soup : MISO
Miso is the name of the seasoning that makes the soup. Basic miso seasoning is made by fermenting rice, barley and soybeans with salt and a fungus to produce a paste. The paste can be added to stock to make miso soup, or perhaps to flavor tofu.

55. Impulse transmitter : AXON
A nerve cell is more correctly called a neuron. The branched projections that receive electrochemical signals from other neurons are known as dendrites. The long nerve fiber that conducts signals away from the neuron is known as the axon. A neuron that has no definite axon is referred to as “apolar” or “nonpolar”. In apolar neurons the nerve impulses radiate in all directions.

56. North Carolina vacation area : OUTER BANKS
The Outer Banks are a 200-mile long chain of barrier islands lying just off the coast of North Carolina (and a small section of Virginia). The seas of the Outer Banks have a reputation as being very treacherous and so are nicknamed the Graveyard of the Atlantic.

59. Gaiman who wrote “American Gods” and “Coraline” : NEIL
Neil Gaiman is an English author whose works include novels, comic books and graphic novels.

60. Film about rock groups? : GREEN ALGAE
Algae are similar to terrestrial plants in that they use photosynthesis to create sugars from light and carbon dioxide, but they differ in that they have simpler anatomies, and for example lack roots.

62. Bellini and Botticelli : OLD MASTERS
Giovanni Bellini was a painter from Venice who was active during the Italian Renaissance. One of Bellini’s students was Tiziano Vecelli, who is better known in English as Titian.

Down
4. War force : ARES
The Greek god Ares is often referred to as the Olympian god of warfare, but originally he was regarded as the god of bloodlust and slaughter. Ares united with Aphrodite to create several gods, including Phobos, Deimos and Eros. The Roman equivalent to Ares was Mars. Ares was the son of Zeus and Hera.

5. Pro ___ : TEM
“Pro tempore” can be abbreviated to “pro tem” or “p.t.” “Pro tempore” is a Latin phrase that best translates as “for the time being”. It is used to describe a person who is acting for another, usually a superior. The President pro tempore of the US Senate is the person who presides over the Senate in the absence of the Vice President of the US. It has been tradition since 1890 that the president pro tem is the most senior senator in the majority party. The president pro tem ranks highly in the line of succession to the presidency, falling third in line after the Vice President and the Speaker of the House.

6. “Out of the Blue” group, for short : ELO
“Out of the Blue” is a double album released in 1977 by ELO. All the tracks were written by band leader Jeff Lynne in just three weeks in a rented chalet in the Swiss Alps. A creative environment I guess …

10. Philippine money : PESO
The writing on bank notes in the Philippines used to be in English, so the national currency was recorded as the “peso”. Since 1967 the language on the notes has been Filipino, and now the name of the currency is written as “Piso”.

11. His last play was “When We Dead Awaken” : IBSEN
Henrik Ibsen was a Norwegian playwright, considered by many to be the greatest playwright since William Shakespeare. Ibsen was famous for shocking his audiences by exploring subjects that offended the sensibilities of the day (the late 1800s).

13. Classic folk number : OH! SUSANNA
“Oh! Susanna” is a song that was published in 1848, written by Stephen Foster. The song is often called “Banjo on My Knee”, an understandable slip given the words of the chorus. “Oh! Susanna” came to be associated with the Forty-Niners, the miners who travelled to California in the 1849 Gold Rush. The lyrics were changed to suit the Gold rush theme with “Alabama” being replaced by “California”, and “banjo” being replaced by “washpan”.

21. Bouquets, quaintly : NOSEGAYS
A nosegay is a posy, a bouquet of flowers. As one might expect, a nosegay is designed to make the nose gay and joyous with the aroma of fresh cut flowers.

23. Island known for its spices : ZANZIBAR
Zanzibar is an archipelago in the Indian Ocean located just 20 miles or so off the east coast of Africa. The largest island in the group is Unguja, which is often referred to informally as “Zanzibar”. When Zanzibar merged with Tanganyika in 1964, the resulting state was named the United Republic of Tanzania, with “Tanzania” being a portmanteau of “Zanzibar” and “Tanganyika”. The islands of Zanzibar, along with the Tanzania’s Mafia Island, are collectively referred to as the Spice Islands (not to be confused with the Spice Islands in Indonesia).

24. This year’s starlet : IT GIRL
Clara Bow was a fabulous star of silent film, with her most famous movie being “It” from 1927. Clara Bow’s performance was so celebrated in the movie that she was forever to be known as the “It-girl”. The term “it” was a euphemism for “sex appeal”, and that is what Clara Bow was known to “exude”. Bow applied her red lipstick in the shape of a heart, and women who copied this style were said to put on a “Clara Bow”. And, the phrase “it girl” is still used sometimes to describe an attractive young celebrity or socialite.

26. Sphere of control : FIEF
Feudalism was a legal and military system that flourished in medieval Europe. Central to the system were the concepts of lords, vassals and fiefs. Lords would grant fiefs (land or rights) to vassals in exchange for allegiance and service.

27. Org. in “Patriot Games” : IRA
“Patriot Games” is a 1987 novel from Tom Clancy that features his hero Jack Ryan. The story opens with Ryan saving the lives of the Prince and Princess of Wales during a kidnapping attempt by an Irish terrorist group. In the 1992 film adaptation of the book, the Prince and Princess of Wales are dropped from the story, and replaced by the British Secretary of State for Northern Ireland.

28. Like Hemingway vis-à-vis most other writers : TERSER
Ernest Hemingway’s writing style has been described variously as lean, terse, economical, spare and tight. He didn’t waste words, and avoided complicated syntax.

33. It may cause sparks to fly : TESLA COIL
A Tesla coil is used to create the high voltages needed to ionize air in those pyrotechnic shows where sparks jump from globe to globe. The same technology was used up to the twenties in spark-gap radio transmitters which were central to wireless telegraphy back then.

44. First name on the 1970s-’80s Lakers : KAREEM
Kareem Abdul-Jabbar’s name at birth was Ferdinand Lewis “Lew” Alcindor. Alcindor changed his name when he converted to Islam.

49. “The Tin Drum” boy : OSKAR
“The Tin Drum” is a novel by German author Günter Grass that was first published in 1959. The book was a adapted into very successful 1979 film of the same name, which won that season’s Academy Award for Best Foreign Language Film.

52. Land on the Gulf of Guinea : TOGO
Togo is a country on the West African coast, one of the smallest nations on the continent. It is located between Ghana to the west, Benin to the east and Burkina Faso to the north.

Mickey’s is brand of malt liquor that is now owned by Miller. It was introduced in the early sixties and is known for the beehive-shaped bottle with a wide mouth.

57. Kind of virus : RNA
A virus is a small, infectious agent, made up of either two or three parts:

– Genetic material, either DNA or RNA
– A protein coat to protect the genetic material
– Possibly a lipid envelope that surrounds the structure while outside the infected cell