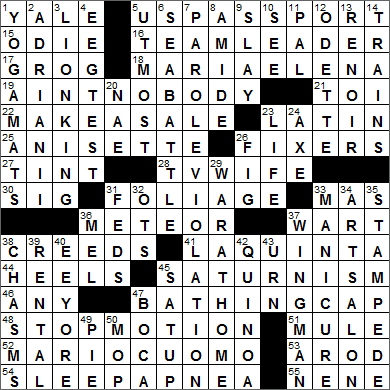 Today’s Wiki-est, Amazonian Googlies
Across
1. School for Rory Gilmore of “Gilmore Girls” : YALE
“Gilmore Girls” is a comedy show that originally aired from 2000 to 2007 on the WB. The title characters are mother and daughter Lorelai and Rory Gilmore, played by Lauren Graham and Alexis Bledel.

5. Item that became trilingual in the late ’90s : US PASSPORT
As a result of a League of Nations conference in 1920, passports are usually written in French and one other language. French was specified back then as it was deemed the language of diplomacy. US passports use French and English, given that English is the nation’s de facto national language. Spanish was added as a language for US passports in the late nineties in recognition of Spanish-speaking Puerto Rico.

15. Slavering toon : ODIE
Odie is Garfield’s best friend and is a slobbery beagle. Both are characters in Jim Davis’s comic strip named “Garfield”.

17. Salty drink? : GROG
Edward Vernon was a naval officer with the nickname “Old Grog”. In 1740, Vernon ordered that the daily ration of rum for his sailors should be watered down, in order to reduce discipline problems caused by drunkenness. The diluted rum was sweetened with sugar, and lemon or lime added to help preserve it on long voyages. This recipe, found to reduce scurvy among sailors (because of the citrus) spread throughout the Royal Navy, and “grog” was born.

18. She was “the answer to a prayer” in a 1941 #1 Jimmy Dorsey hit : MARIA ELENA
“Maria Elena” is a Spanish song written in 1932, with the English version becoming a 1941 hit for the Jimmy Dorsey orchestra. The song was dedicated to María Elena Portes Gil, the wife of the Mexican President in the late twenties.

19. 1983 hit for Rufus and Chaka Khan : AIN’T NOBODY
Chaka Khan is the stage name of singer Yvette Stevens from Chicago. Chaka Khan was the front woman for the band Rufus before she launched her very successful solo career.

21. French pronoun : TOI
In French, the pronouns “toi” and “vous” both mean “you”, with the former being used with family and friends, and children. “Vous” is more formal, and is also the plural form of “toi”.

23. Like salsa : LATIN
The genre of music called salsa is a modern interpretation of various Cuban traditional music styles.

27. Auto option patented by 3M : TINT
The company that is now called 3M was founded as a mining venture in 1902, and used to be known as the Minnesota Mining and Manufacturing Company (hence the name “3M”).

38. Confessed statements : CREEDS
A creed is a confession of faith, or a system of belief or principles. The word “creed” comes from the Latin “credo” meaning “I believe”.

41. “Wake Up on the Bright Side” sloganeer : LA QUINTA
The first La Quinta hotel opened in 1969 in San Antonio, Texas. “La Quinta” is Spanish for “The Villa”.

52. Governor who was the father of another governor : MARIO CUOMO
Mario Cuomo was Governor of New York from 1983 to 1994. I well remember Mario Cuomo’s keynote address to the 1984 Democratic National Convention soon after I moved to America. For a new immigrant it was an interesting glimpse into American politics. Here’s a little bit of trivia about Mario Cuomo: he was the first ever guest for Larry King on his CNN talk show “Larry King Live”, back in 1985. Cuomo passed away in January 2015 at the age of 82.

Andrew Cuomo won the gubernatorial election for the State of New York in 2010. Andrew is the son of former Governor of New York, Mario Cuomo. Andrew was also married for 13 years to Kerry Kennedy, a daughter of Robert F. Kennedy.

53. Yank with 25 grand slams : A-ROD
Professional baseball player Alex Rodriguez earned more nicknames than just A-Rod. He has been called “the Cooler” by some players as there is a perception that teams go cold when he joins them and hot when he leaves. He has also been called “A-Fraud” by teammates because of another perception, that he is over-demanding. Rodriguez was in a world of hurt not so long ago, for using illegal performance-enhancing drugs.

54. Polysomnogram finding : SLEEP APNEA
Sleep apnea (“apnoea” in British English) can be caused by an obstruction in the airways, possibly due to obesity or enlarged tonsils.

55. Bird with a resonant “ha-wah” call : NENE
The bird called a nene is a native of Hawaii, and is also known as the Hawaiian goose. The name “nene” is imitative of its call. When Captain Cook landed on the islands in 1778, there were 25,000 nene living there. By 1950, the number was reduced by hunting to just 30 birds. Conservation efforts in recent years have been somewhat successful.

Down
2. Ninth-century pope who was married with a daughter : ADRIAN II
Pope Adrian II’s papacy lasted for five years, until his death in 872 CE. Before his ordination, the future Pope Adrian II had married, a woman named Stephania with whom he had a daughter. Apparently, it wasn’t unusual back then for married men to be ordained.

3. Simba sobriquet : LION KING
In “The Lion King”, the protagonist is Simba, the lion cub born to Mufasa and Sarabi. The main antagonist is Scar, Simba’s uncle and Mufasa’s brother.

A sobriquet is an affectionate nickname. “Sobriquet” is French for “nickname”.

4. A migraine sufferer might have one : EEG TEST
An electroencephalogram (EEG) is a record of electrical activity caused by the firing of neurons within the brain. The EEG might be used to diagnose epilepsy, or perhaps to determine if a patient is “brain dead”.

6. Aeschylus’ play “The Persians” is about one : SEA BATTLE
Aeschylus was one of three ancient Greek tragedians whose work has survived. The first of these was Aeschylus, the second Sophocles, and the third Euripides. Aeschylus is sometimes referred to as the father of tragedy, as his work is the earliest known representation of the style.

7. Crossing state lines, perhaps : PAROLE VIOLATION
The term “parole” is a French word that we use in English, with the French “parole” meaning “word, speech”. Of particular interest is the French phrase “parole d’honneur” which translates as “word of honor”. In the early 1600s we started using “parole” to mean a promise by a prisoner of war not to escape, as in the prisoner giving his “word of honor” not to run off. Over time, parole has come to mean conditional release of a prisoner before he or she has served the full term of a sentence.

12. “Swan Lake” heroine : ODETTE
“Swan Lake” is such a delightfully light and enjoyable ballet by Pyotr Ilyich Tchaikovsky. “Swan Lake” tells the story of Odette, a princess turned into a swan by a sorcerer. The ballet also features Odile, Odette’s “evil twin”. Odile is disguised to look like Odette with the goal of tricking the prince to fall in love with her. In the ballet, the roles of Odette and Odile are played by the same ballerina.

13. “Claude Monet Painting in His Garden at Argenteuil,” e.g. : RENOIR
Pierre-Auguste Renoir was a French painter, very much at the forefront of the Impressionist Movement. Renoir was a prolific artist, with several thousand works attributed to him. The largest collection of Renoirs is actually in the United States. You can see 181 of his paintings at the Barnes Foundation just outside Philadelphia.

23. Magazine that published Harry Truman’s memoirs : LIFE
Harry Truman wanted to go to West Point having served with the Missouri Army National Guard on active duty in WWI, but he couldn’t get in because of his poor eyesight. Young Truman didn’t have the money to pay for college anywhere else. He did manage to study for two years towards a law degree at the Kansas City Law School in the twenties, but he never finished his schooling. So, Harry S. Truman was the last US President (out of a list of ten) who did not have a college degree.

31. RICO enforcers : FEDS
The RICO act is more fully called the Racketeer Influenced and Corrupt Organizations Act. The law was used largely to prosecute members of the Mafia in the seventies, and has been applied more broadly since.

32. They may end with golden goals, for short : OTS
Overtime (OT)

In some sports, a tied game or match is decided in overtime, with the winner being the first team or player to score a point or a goal. That game-winning score is referred to as the “golden goal”.

36. Former Florida senator Martinez : MEL
Mel Martínez served as Secretary of Housing and Urban Development in the cabinet of President George W. Bush. Martínez resigned from that position in 2003 to mount what proved to be a successful campaign to become US Senator for Florida. When he took his seat in 2005, Martínez became the first Cuban-American to serve in the US Senate.

39. Zipcar alternative : RENTAL
Zipcar is a carsharing company. Carsharing differs from car rental in that cars are available only to members, but 24 hours a day as opposed to office hours. There are other differences, including the fact that members are usually responsible for leaving cars gassed up and clean for the next user.

40. Kid-lit character who says “The nicest thing about the rain is that it always stops. Eventually” : EEYORE
Eeyore is the donkey character in A. A. Milne’s “Winnie-the-Pooh”. Eeyore is very lovable, but has a gloomy and pessimistic outlook on life.

42. Trendy pseudocereal : QUINOA
Quinoa is a grain crop that is more closely related to beetroots and spinach that it is to cereals and grasses. Quinoa is mainly cultivated for its edible seeds, which are high in protein. The seeds are also gluten free, which seems to be a big deal these days. I do like my quinoa …

43. Cinerary item : URN
Something described as “cinerary” is intended to hold the ashes of a cremated person, as in a “cinerary urn”.

47. Locale of the Evert Tennis Academy, familiarly : BOCA
The name of the city of Boca Raton in Florida translates from Spanish as “Mouse Mouth”. There doesn’t seem to be a definitive etymology of the name but one plausible explanation is a nautical one. “Boca”, as well as meaning “mouth” can mean “inlet”. “Ratón”, as well as meaning “mouse” was also used to describe rocks that chewed away at a ship’s anchor cable. So possibly Boca Raton was named for a rocky inlet.