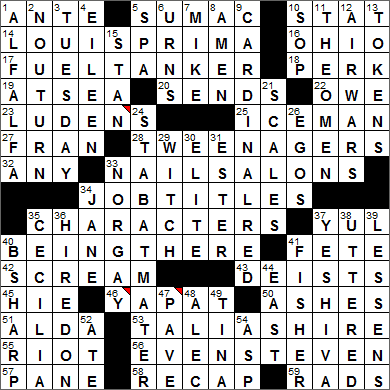 Today’s Wiki-est, Amazonian Googlies
Across
5. Plant used in tanneries : SUMAC
Sumacs are a group of flowering shrubs and small trees that includes Poison oak, Poison ivy and Poison sumac (nasty stuff!). The leaves of some species of sumac contain tannins that are used for tanning leather. Morocco leather is an example of the use of sumac tannins.

10. Topps tidbit : STAT
Topps was a relaunch of an older company called American Leaf Tobacco, with the Topps name used from 1938. The earlier company was in trouble because it could not get supplies of its Turkish tobacco, so it moved into another chewy industry, making bubblegum. Nowadays, Topps is known for including (mainly) sports-themed trading cards in the packs of gum.

14. Bandleader whose band was the New Orleans Gang : LOUIS PRIMA
Louis Prima was a singer, trumpeter and bandleader who was active from the twenties through the sixties. One of Prima’s more famous performances is “I Wanna Be Like You” from “The Jungle Book”, a duet that he sung with Phil Harris in the 1967 animated movie. Prima also recorded a celebrated version of the song “Just a Gigolo” as a medley with “I Ain’t Got Nobody”. Cover versions of the same medley were released by Village People in 1978 and David Lee Roth in 1985.

16. River into which the Big Sandy and the Little Sandy flow : OHIO
The 29-mile long Big Sand River forms part of the boundary between the states of West Virginia and Kentucky, before emptying into the Ohio River. There is also a Little Sandy River in Kentucky that empties into the Ohio.

23. Cough drop brand : LUDEN’S
The Luden’s brand of throat lozenge was created in 1879 by William H. Luden. Luden was able to give his cough drops national attention by giving samples to railroad workers, who took their “freebies” all over the country.

27. Human member of an old TV trio : FRAN
“Kukla, Fran and Ollie” is an early television show that aired from 1947-1957. Kukla and Ollie (Oliver J. Dragon) were puppets and Fran was Fran Allison, usually the only human on the show.

37. Charlton’s “The Ten Commandments” co-star : YUL
Yul Brynner was a Russian-born actor. Brynner was well known for his great performances, but also for his shaved head and his deep rich voice. He first adopted the “hairstyle” while playing the King of Siam in the stage version of “The King and I”, and he stuck with it.

Peter Sellers was British comedian and actor, and a genius (in my humble opinion). In Britain, Sellers was famous on the radio as a star on “The Goon Show”, In the rest of the world, Sellers is perhaps best-known for playing Inspector Clouseau in “The Pink Panther” series of films. Like so many of the greatest comic performers it seems, Sellers struggled with depression in his life off-camera.

43. Albert Einstein and others : DEISTS
Deism (from the Latin “deus” meaning god) is the belief that a supreme being created the universe, a belief based on observation and reason and without the need for faith. Further, a deist does not accept divine intervention and rather believes that the supreme being, having created the universe, leaves the world to it own devices.

50. “People who fight fire with fire usually end up with ___”: Abigail Van Buren : ASHES
The advice column “Dear Abby” first appeared in 1956. Pauline Phillips was Abby back then, but now the column is written by Jeanne Phillips, her daughter. The full name of the “Abby” pen name is Abigail Van Buren, which Pauline Phillips came up with by combining “Abigail” from the biblical Book of Samuel, and “Van Buren” after the former US president.

51. Oscar nominee for “The Aviator” : ALDA
Alan Alda has had a great television career, especially of course on “M*A*S*H”. Alda won his first Emmy in 1972, for playing Hawkeye Pierce on “M*A*S*H”. He won his most recent Emmy in 2006 for his portrayal of Presidential candidate Arnold Vinick in “The West Wing”. When it comes to the big screen, my favorite of Alda’s movies is the 1978 romantic comedy “Same Time, Next Year” in which he starred opposite Ellen Burstyn.

53. Actress sister of Francis Ford Coppola : TALIA SHIRE
The actress Talia Shire is best-known for playing Rocky’s wife Adrian in the “Rocky” series of movies. She also played Connie, the daughter of Don Corleone, in “The Godfather” films. Shire is the sister of movie director Francis Ford Coppola and the aunt of actor Nicolas Cage. Her son is the actor Jason Schwartzman.

59. CAT scan units : RADS
A rad is a unit used to measure radiation levels that is largely obsolete now. The rad has been superseded by the rem.

A CT (or “CAT”) scan produces (via computer manipulation) a three dimensional image of the inside of an object, usually the human body. It does so by taking a series of two dimensional x-ray images while rotating the camera around the patient. The issue with CT scans is that they use x-rays, and high doses of radiation can be harmful, causing damage that is cumulative over time.

Down
3. Super ___ : TUESDAY
Super Tuesday happens in February or March of a presidential election year. It is that Tuesday in which the greatest number of states hold primaries that will select delegates to be dispatched to the national conventions. Super Tuesday has become more significant over the past couple of decades as more and more states hold their primaries early in the cycle in order to increase the importance of the votes from the state.

4. With 41-Down, women’s fashion brand : EILEEN
(41D. See 4-Down : FISHER)
The Eileen Fisher brand fashion brand is known for using regular folks to model its clothes in print advertising.

10. Pacifier : SOP
Cerberus is a dog with three heads that appears in both Greek and Roman mythology. Cerberus had the job of guarding the gates of Hades and preventing those who had crossed the River Styx from ever escaping. A sop is a piece of food that has been dipped in some liquid, as one might sop a piece of bread in soup. There is an idiomatic expression, “to give a sop to Cerberus”, which means to give someone a bribe, or pay someone off. The idea is that if one could bribe Cerberus, give him a sop to eat, then he would let you pass and escape from Hades.

The date 6/6/06 is significant in that “666” is the “number of the beast” that is linked to Satan or the Anti-Christ according to the Book of Revelation in the Bible. The fear of the number 666 has been given a name: Hexakosioihexekontahexaphobia. Don’t forget …

15. Eminem song about an obsessed fan : STAN
Rap star Eminem’s real name is Marshall Mathers, a native of Saint Joseph, Missouri. Mathers grew up poor, raised by a single-mom as the family was abandoned by his father when he was 18 months old. Marshall and his mother moved around the country before settling in a suburb of Detroit. He didn’t do well at school, and dropped out at the age of 17. But in the end he made it pretty big …

21. Device used by Anubis to determine a soul’s fate : SCALES
Anubis is the Greek name for the Ancient Egyptian deity called Inpu, a god associated with death and mummification. Anubis’s role was to protect the dead and their tombs.

24. Hymn set to music by Vivaldi and Haydn : STABAT MATER
There are two hymns that can be referred to as “Stabat Mater”, namely “Stabat Mater Dolorosa” and “Stabat Mater Speciosa”. The former translates as “Sorrows of Mary”, and is the most famous of the pair.

26. Psychic mediators : EGOS
Sigmund Freud created a structural model of the human psyche, breaking it into three parts: the id, the ego, and the super-ego. The id is that part of the psyche containing the basic instinctual drives. The ego seeks to please the id by causing realistic behavior that benefits the individual. The super-ego almost has a parental role, contradicting the id by introducing critical thinking and morals to behavioral choices.

31. Ethyl acetate, for one : ESTER
Esters are very common chemicals. The smaller, low-molecular weight esters are usually pleasant smelling and are often found in perfumes. At the other end of the scale, the higher-molecular weight nitroglycerin is a nitrate ester and is very explosive, and polyester is a huge molecule and is a type of plastic. Fats and oils found in nature are fatty acid esters of glycerol.

Ethyl acetate is an ester made by reacting ethanol with acetic acid. It is a common solvent found in things like nail polish removers and glues. As I recall from my long-gone days in a lab, ethyl acetate has a very nice fruity smell.

33. Hillary’s mate : NORGAY
Mount Everest was first summited in 1953 by New Zealander Edmund Hillary and Nepalese sherpa Tenzing Norgay. Hillary and Norgay were part of an expedition from which two pairs of climbers were selected to make a summit attempt. The first pair were Tom Bourdillon and Charles Evans, and they came within 330 feet of their goal but had to turn back. The expedition sent up the second pair two days later, and history was made on 29 May 1953.

37. “Yentl” setting : YESHIVA
In the Jewish tradition a yeshiva is an educational institution focusing on the study of sacred texts.

“Yentl” is a play that opened in New York City in 1975. The move to adapt the play for the big screen was led by Barbara Streisand, and indeed she wrote the first outline of a musical version herself as far back as 1968. The film was eventually made and released in 1983, with Streisand performing the lead role.

44. Far ___ : EAST
In geographical terms there are three “Easts”. The Near East and Middle East are terms that are often considered synonymous, although “Near East” tends to be used when discussing ancient history and “Middle East” when referring to the present day. The Near/Middle East encompasses most of Western Asia and Egypt. The term “Far East” describes East Asia (including the Russian Far East), Southeast Asia and South Asia.

49. Brown of publishing : TINA
Tina Brown is a British/American journalist and author. Brown wrote “The Diana Chronicles”, a biography of Diana, Princess of Wales, of whom Brown was a personal friend. She emigrated to the US in 1984 to become editor for “Vanity Fair”, and later took the helm at “The New Yorker”.

54. Symbol of Tut’s power : ASP
The venomous snake called an asp was a symbol of royalty in Ancient Egypt.

King Tut is a name commonly used for the Egyptian pharaoh Tutankhamen. Tutankhamen may not have been the most significant of the pharaohs historically, but he is the most famous today largely because of the discovery of his nearly intact tomb in 1922 by Howard Carter. Prior to this find, any Egyptian tombs uncovered by archaeologists had been ravaged by grave robbers. Tutankhamen’s magnificent burial mask is one of the most recognizable of all Egyptian artifacts.