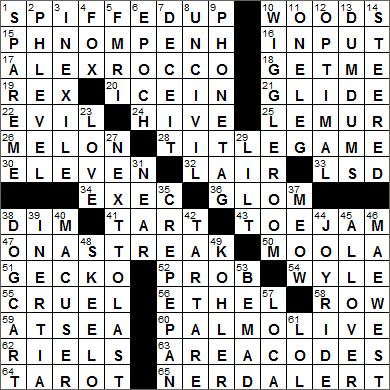 Today’s Wiki-est, Amazonian Googlies
Across
1. Got smart : SPIFFED UP
A spiff is a well-dressed man.

15. Capital where “hello” is pronounced “johm riab sua” : PHNOM PENH
Phnom Penh (also “Pnom Penh”) is the capital of Cambodia, and has been so since the French colonized the country in the late 1800s. The city’s name translates from the Khmer language as “Hill of Penh”.

18. “Capeesh?” : GET ME?
“Capeesh?” is a slang term meaning “do you understand?” It comes from the Italian “capisce” meaning “understand”.

24. Drone base : HIVE
Drone bees and ants are fertile males of the species, whose sole role in life seems to be to mate with a queen.

25. Animal whose name is derived from the Latin for “ghosts” : LEMUR
Lemurs are the most unusual-looking creatures, native to the island of Madagascar off the east coast of Africa. With their white fur and dark eyes that are very reflective at night, they have a “ghostly” appearance. Indeed, the animals takes their name from Roman mythology in which “lemures” were spirits of the restless dead.

28. March Madness conclusion : TITLE GAME
March Madness is the name given to the NCAA Men’s Division 1 Basketball Championship (among others), held in spring each year.

30. It’s a natural : ELEVEN
In the gambling game of craps, a throw of seven or eleven on the first cast of the dice is called a “natural”.

33. “Tabs” : LSD
The drug LSD is often sold impregnated into blotter paper. The paper blotter is usually divided into squares with ¼-inch sides, with each square referred to as a “tab”.

34. Suit : EXEC
In the world of business, “suit” is a slang term describing an executive or manager, often one who is a faceless decision maker.

36. Grab (onto) : GLOM
“Glom” is a slang term meaning “steal”, although it can also be used to mean “latch onto” when used as “glom onto”. The term probably comes from the Scots word “glam” meaning “to snatch at”.

41. One rarely seen outside its shell? : TART
That would be the pie.

43. It’s around a foot : TOE JAM
“Toe jam” is a slang term referring to any material that collects between the toes. Ick …

51. Insurance company symbol : GECKO
The Gecko is the “spokes-lizard” for GEICO. When the Gecko was introduced in 1999, he was voiced by actor Kelsey Grammer of “Cheers” and “Frasier” fame. Since then, the Gecko has been voiced by British radio presenter Dave Kelly and most recently by actor Jake Wood, who plays Max Branning on the British soap opera “EastEnders”.

54. Noah of “ER” : WYLE
Noah Wyle is an actor noted for playing Dr. John Truman Carter III on television’s “ER”. He was highly valued by the show’s producers, earning about $400,000 per episode in 2005, a world record for an actor in a TV drama at that time.

56. Kennedy who won a Medal of Freedom : ETHEL
Ethel Kennedy is the widow of Robert F. Kennedy. Ethel was a roommate with Jean Kennedy, and through Jean met her brother Robert. Robert and Ethel had ten children together, with an eleventh child sadly arriving after Robert’s assassination in 1968.

58. Fracas : ROW
“Fracas” is a French word that we absorbed into English. In turn, the French usage evolved from the Italian “fracasso” meaning “uproar, crash”.

60. Brand once pitched with the slogan “You’re soaking in it” : PALMOLIVE
Palmolive is a brand of soap and related products. The first product was a soap made from palm oil and olive oil, introduced in 1898.

62. Currency in 15-Across : RIELS
(15A. Capital where “hello” is pronounced “johm riab sua” : PHNOM PENH)
The Cambodian riel was first introduced in 1953, and was taken out of circulation by the Khmer Rouge in 1975 when they completely abolished money on taking control of the country. After the Vietnamese invasion of 1978, money was reintroduced and the Cambodian people are still using the “second” riel. The original riel was divided into 100 centimes, but this was changed to 100 “sen” in 1959.

63. Regional IDs : AREA CODES
Area codes were introduced in the 1940s. Back then the “clicks” one heard when dialling a number led to mechanical wear on various pieces of equipment. In order to minimize overall mechanical wear, areas with high call volumes were given the most efficient area codes (lowest number of clicks). That led to New York getting the area code 212, Los Angeles 213 and Chicago 313.

64. The Devil, e.g. : TAROT
Tarot cards have been around since the mid-1400s, and for centuries were simply used for entertainment as a game. It has only been since the late 1800s that the cards have been used by fortune tellers to predict the future. The list of tarot cards includes the Wheel of Fortune, the Devil, the Hanged Man and the Lovers.

65. “Ha ha, what a dork!” : NERD ALERT!
I consider “dork” to be pretty offensive slang. It emanated in the sixties among American students, and has its roots in another slang term, a term for male genitalia.

Down
2. Soil scientist’s measure : PH LEVEL
As we all recall from chemistry class, a pH of 7 is considered neutral. Anything less than 7 is an acid, and anything above 7 is a base.

5. Modern brain-scanning procedure, for short : FMRI
Functional magnetic resonance imaging (fMRI) is a technique that measures brain activity by detecting changes in blood flow in response to neural activity. The idea is that when an area of the brain becomes more active it consumes more oxygen, and so blood supply increases to supply that oxygen.

6. Late Jurassic, e.g. : EPOCH
The Jurassic geologic period lasted from about 200 to 145 million years ago, following the Triassic and followed by the Cretaceous. Limestone strata from the period were first identified in the Jura Mountains in the Western Alps. It is this mountain range that gives us the name “Jurassic”.

10. Leeway : WIGGLE ROOM
Our word “leeway” meaning “spare margin” is nautical in origin. A vessel’s leeway is the amount of drift motion away from her intended course that is caused by the action of the wind.

13. Small lollipops with collectible wrappers : DUM DUMS
Dum Dums are a brand of lollipops that were introduced in 1924 by the Akron Candy Company in Bellevue, Ohio.

35. Piece of brunch-making equipment : CREPE PAN
“Crêpe” is the French word for “pancake”.

38. Light carriage : DOGCART
A dogcart is a very light-weight, horse-drawn carriage. They were very common in Victorian England and so turn up a lot in the “Sherlock Holmes” stories written by Sir Arthur Conan Doyle.

39. Trouble getting started : INERTIA
Newton’s first law of motion states that a body that is moving maintains the same velocity unless it is acted upon by an external force. That resistance to changing velocity is known as “inertia”.

40. Non-PC sort : MAC USER
The original IBM Personal Computer is model number 5150, which was introduced to the world on August 12, 1981. The term “personal computer” was already in use, but the success of the IBM 5150 led to the term “PC” being used for all computer products compatible with the IBM platform.

42. Rarer than rare : TARTARE
What we now call steak tartare was first served in French restaurants in the early 1900s, and back then was called steak à l’Americaine, would you believe? It was basically raw, seasoned beef mixed with egg yolk. A later version of l’Americaine, without the egg yolk and with tartar sauce served on the side, was called steak tartare. Over time the two versions became one, and the steak tartare moniker won out. By the way, if you order steak tartare in Switzerland, I believe you are served horse meat. There are now similar “tartare” dishes made with raw salmon, or raw tuna.

44. Going out with a hot model? : JOYRIDE
Someone might take a joyride in a hot (stolen) car.

46. She famously said “I’m single because I was born that way” : MAE WEST
Comic actress Mae West can be quoted so easily, as she had so many great lines delivered so well. Here are a few:

48. Rapper with the 1995 hit “I Wish” : SKEE-LO
Skee-Lo is the stage name of rap artist Antoine Roundtree who is best known for his 1995 song “I Wish”. Skee-Lo now lives in Winnebago, Wisconsin where he owns an auto dealership.

49. Faucet brand : KOHLER
Kohler is a manufacturer of plumbing products based in Kohler, a village in Wisconsin that was renamed in 1912 in honor of the company. The Kohler Company was founded in 1873 by Austrian immigrants John Kohler and Charles Silberzahn.

57. Crazy, in a 2010 Shakira hit : LOCA
Shakira is a hugely successful singer from Colombia. She appears on TV as one of the coaches on the reality show “The Voice”.