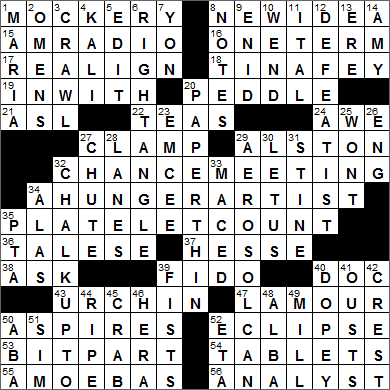 Today’s Wiki-est, Amazonian Googlies
Across
16. Something John Adams and John Quincy Adams each had : ONE TERM
John Adams was the second President of the United States. I must admit that I learned much of what I know about President Adams in the excellent, excellent HBO series “John Adams”. Having said that, I have also visited his home in Quincy, Massachusetts several times. He was clearly a great man with a great intellect …

John Quincy Adams, the son of John Adams, was the 6th President. Like his father, John Quincy worked for many years as a diplomat representing the young United States. After leaving office, Adams served in Congress as Representative from Massachusetts, becoming the only president ever to enter the House after leaving the office as President.

21. Means of communication since 1817, in brief : ASL
It’s really quite unfortunate that American Sign Language (ASL) and British Sign Language (BSL) are very different, and someone who has learned to sign in one cannot understand someone signing in the other.

34. 1922 Kafka short story : A HUNGER ARTIST
“A Hunger Artist” (also “A Fasting Artist”) is a short story by Franz Kafka that was first published in 1922. The protagonist of the work is a performance artist who fasts in public for many days in a cage.

35. Hematologist’s measure : PLATELET COUNT
Platelets are cell-like structures in the blood, although they have no nucleus nor any DNA. When bleeding occurs, the wall of the damaged blood vessel is covered with a clot made up of platelets enmeshed in a protein called fibrin.

36. Pioneer in New Journalism in the 1960s-’70s : TALESE
Gay Talese is an American author, famous as a journalist in the sixties at “The New York Times”. His 1981 book “Thy Neighbor’s Wife” is a study of sexuality in America in the early fifties. Apparently, as research for the book, Talese had sexual relations with his own neighbor’s wife for several months at a sexuality resort in Southern California called Sandstone Retreat.

37. Author who shares his name with a German state : HESSE
Hermann Hesse was not only a novelist, but also a poet and a painter. Hesse’s best-known work is probably his 1927 novel “Steppenwolf”.

40. Michael Moore offering, for short : DOC
Michael Moore is a documentary filmmaker, famously from Flint, Michigan. Moore is known for several documentaries that have performed well at the box office, especially “Fahrenheit 9/11” (2004), “Bowling for columbine” (2002) and “Sicko” (2007).

43. Sea ___ : URCHIN
Sea urchins are globular, spiny creatures found just about everywhere in the ocean. The “roe” of a sea urchin is eaten as a delicacy in several cuisines around the world. In a sushi restaurant, the sea urchin roe is called “uni”. The term “roe” normally means “fish eggs”, but in the case of the sea urchin it refers to the gonads of both the male and female.

47. Part of a hit 1940s-’50s film trio : LAMOUR
The actress Dorothy Lamour is best known for co-starring in the “Road to …” series of films with Bing Crosby and Bob Hope. Lamour was born Mary Slaton in New Orleans, and was crowned Miss New Orleans in 1931. She moved to Hollywood in 1936, and starred in her first “Road to …” movie in 1940.

53. It doesn’t have much to say : BIT PART
A walk-on role in a performance is one in which the actor makes an appearance on stage or on set, but has no dialog. One line of dialog elevates the role to a “bit part”.

54. Armful for Moses : TABLETS
According to the Book of Exodus, God inscribed the Ten Commandments on two stone tablets and gave them to Moses on Mount Sinai.

55. Slide presentations? : AMOEBAS
An ameba (or “amoeba”, as we spell it back in Ireland) is a single-celled microorganism. The name comes from the Greek “amoibe”, meaning change. The name is quite apt, as the cell changes shape readily as the ameba moves, eats and reproduces.

56. Hedge fund employee : ANALYST
Originally, a “hedge fund” was a fund that paired long and short positions in a strategy designed to “hedge” market risk, to avoid major losses. That’s far from the case today, as hedge funds are now relatively high risk/reward investments that are not available to the general public as they avoid or partially avoid regulatory oversight.

Down
1. Santa ___ : MARIA
When Columbus made his famous voyage of discovery, the largest of his three ships was the Santa Maria. The Santa Maria ran aground on the coast of Hispaniola on Christmas Day in 1492 and was lost. 39 of Columbus’s men were left behind with the permission of the locals. These men stripped the timbers from the Santa Maria and used them to build a settlement they called La Navidad (Spanish for “Christmas”). La Navidad is now the modern town of Môle-Saint-Nicolas in the Republic of Haiti.

3. Feature of CNN or Fox News : CRAWL
A news ticker, or “crawler”, is a text-based graphic that runs across the bottom of the screen providing perhaps news headlines or continuous stock quotes.

4. Hindu goddess often portrayed with her husband Shiva : KALI
Kali is a Hindu goddess, the consort of Lord Shiva. The name “Kali” translates as “the black one”.

5. Work on a lead, maybe : EDIT
An editor might work on the lead story.

6. Part of a square : RIGHT ANGLE
In geometry, there are several classes of angles:

9. Wife in Jonathan Franzen’s “The Corrections” : ENID
The author Jonathan Franzen’s most famous work is his 2001 novel “The Corrections”, which won a National Book Award. Franzen got into a little dispute with Oprah Winfrey after she listed “The Corrections” as an Oprah Winfrey’s Book Club selection in 2001. After initially welcoming the selection, Franzen publicly expressed concern that the listing might dissuade men from reading the book. These comments led to Winfrey rescinding an invitation to appear on the show and “unlisted” the novel.

11. It adds stress: Abbr. : ITAL
Italic type leans to the right, and is often used to provide emphasis in text. The style is known as “italic” because the stylized calligraphic form of writing originated in Italy, probably in the Vatican.

13. Emily Dickinson’s “Ended, ___ it begun” : ERE
Emily Dickinson wrote nearly 1800 poems in her lifetime, with less than a dozen published before she died in 1886. Emily’s younger sister discovered the enormous collection, and it was published in batches over the coming decades. Here is one of her poems:

Ended, ere it begun —
The Title was scarcely told
When the Preface perished from Consciousness
The Story, unrevealed —

14. Writer Sedaris : AMY
The actress, author and comedian Amy Sedaris plays a character called Jerri Blank on the television series “Strangers with Candy”. Amy is the younger sister of the humorist and author David Sedaris.

23. Host : EMCEE
The term “emcee” comes from “MC”, an initialism standing for Master or Mistress of Ceremonies.

30. “___ pray” : LET US
“Let us pray” (“Oremus” in Latin) is a phrase oft used in the Roman Catholic and some other Christian traditions.

31. Author of the “Mostly Ghostly” book series : STINE
The author R. L. Stine is sometimes referred to as the Stephen King of children’s literature as he writes horror stories for young people.

33. Sprayed, in a way : MACED
“Mace” is actually a brand name, originally introduced by Lake Erie Chemical when they started to manufacture “Chemical Mace”, with the name being a play on the club-like weapon from days of old. Mace was originally a form of tear gas, but Mace today uses a formula that is actually a pepper spray, a different formulation.

34. Start of a Hamlet monologue : ALAS
In Shakespeare’s “Hamlet”, there is a scene when Prince Hamlet holds in his hand the skull of the deceased court jester Yorick. Hamlet starts into a famous monologue at this point:
Alas, poor Yorick! I knew him, Horatio; a fellow of infinite jest, of most excellent fancy; he hath borne me on his back a thousand times; and now, how abhorred in my imagination it is …
The opening line is often misquoted as “Alas, poor Yorick! I knew him well.”

45. Zodiac symbol : CRAB
Cancer is the fourth astrological sign of the zodiac, and is associated with the constellation named Cancer. The zodiac symbol for Cancer is the crab, and “cancer” is the Latin word for “crab”.

46. One sitting on a celestial throne : HERA
In Greek mythology, Hera was the wife of Zeus and was noted for her jealous and vengeful nature, particularly against those who vied for the affections of her husband. The equivalent character to Hera in Roman mythology was Juno. Hera was the daughter of Cronus and Rhea.

48. Goya’s “Duchess of ___” : ALBA
María Cayetana de Silva was the 13th duchess of Alba. She was a favorite subject of the Spanish painter Francisco Goya. The duchess is the subject in the famous portraits known as “La maja desnuda” (The Nude Maja) and “La maja vestida” (The Clothed Maja). “Maja” translates from Spanish as “beautiful lady”.

51. Kind of card : SIM
Most cell phones have SIM cards these days. SIM cards hold the personal information of the subscriber, with the acronym being short for Subscriber Identity Module.