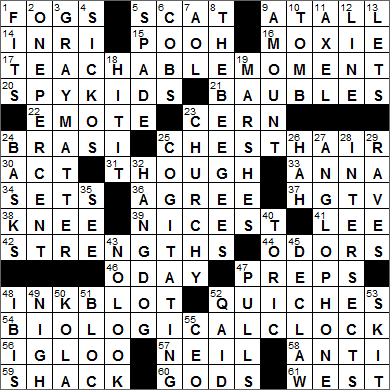 Today’s Wiki-est, Amazonian Googlies
Across
5. Order to go away : SCAT
Our word “scat”, meaning “get lost!” comes from a 19th-century expression “quicker than s’cat”, which meant “in a great hurry”. The original phrase probably came from the words “hiss” and “cat”.

14. Letters on a crucifix : INRI
The letters written on the cross on which Jesus died were “INRI”. INRI is an initialism for the Latin “Iesus Nazarenus, Rex Iudaeorum”, which translates into English as “Jesus the Nazarene, King of the Jews”.

15. Rabbit’s friend : POOH
In A. A. Milne’s “Winnie-the-Pooh” collection of stories, Pooh has many friend in Hundred Acre Wood. Besides Christopher Robin, who doesn’t actually live in the wood, the list includes Piglet, Eeyore, Kanga, Roo, Rabbit, Tigger and Owl.

16. Grit : MOXIE
Back as far as 1876, Moxie was a brand name of a “medicine” peddled with the claim that it “built up your nerve”. In 1924, Moxie was registered as a trademark for a bitter, non-alcoholic beverage (no more claims of nerve-building). And we’ve used the term “moxie” to mean “nerve” ever since …

20. 2001 fantasy/adventure film with three sequels : SPY KIDS
“Spy Kids” is a 2001 starring Alexa Vega and Daryl Sabara as the children of two rival spies. By the time the film is over, the kids have proven themselves as spies in their own right.

21. Many an étagère display : BAUBLES
An “étagère” is a piece of furniture with open shelves, often used to display small ornaments. The name is French, coming from “étage” meaning “shelf”. I can’t stand them …

23. Lab housing the world’s largest machine : CERN
CERN is an acronym standing for “Conseil Européen pour la Recherche Nucléaire” (European Council for Nuclear Research. CERN’s mission is to provide the largest particle physics lab in the world, and it does just that, having built several enormous particle accelerators. The CERN particle accelerator most in the news these days is the Large Hadron Collider located near Geneva.

The Large Hadron Collider is the world’s largest particle accelerator. It is located on the French-Swiss border near Geneva, in a tunnel that is a whopping 17 miles in circumference.

24. Luca who “sleeps with the fishes” : BRASI
Luca Brasi is one of Don Corleone’s most loyal “enforcers” in Mario Puzo’s novel “The Godfather”. Brasi comes to a violent end, garroted while his hand is pinned to a wooden bar with a knife. Famously, the Corleone family learn of his demise when they receive Brasi’s bulletproof vest wrapped around dead fish. The message is that he “sleeps with the fishes”. In the big screen adaptation of “The Godfather”, Luca Brasi is played by ex-wrestler and professional bodyguard Lenny Montana. The role launched a very successful television character-acting career for Montana.

33. “Frozen” princess : ANNA
“Frozen” is a 2013 animated feature from Walt Disney Studios that is based on the Hans Christian Andersen fairy tale “The Snow Queen”.

38. One of the eight points of contact in Muay Thai : KNEE
Muay Thai is a combat sport that originated in Thailand. It is also known as “the art of eight limbs”, a reference to the combined use of the fist, elbows, knees and shins.

41. “Life of Pi” director : LEE
Taiwanese director Ang Lee sure has directed a mixed bag of films, mixed in terms of genre but not in terms of quality. He was at the helm for such classics as “Sense & Sensibility” (my personal favorite), “Crouching Tiger, Hidden Dragon”, “Hulk”, “Brokeback Mountain” and “Life of Pi”.

48. Therapist’s image : INKBLOT
The Rorschach test is a psychological test in which a subject is asked to interpret a series of inkblots. The test was created by Swiss Freudian psychoanalyst Hermann Rorschach in the 1920s.

52. Some miniature hors d’oeuvres : QUICHES
The classic dish called quiche is made with eggs (“oeufs” in French). Even though the quiche is inextricably linked to French cuisine, the name “quiche” comes from the German word for cake, “Kuchen”. The variant called “quiche lorraine” includes bits of smoked bacon as an ingredient.

An hors d’oeuvre is the first course in a meal. “Hors d’oeuvre” translates from French as “apart from the work”, really meaning “not the main course”.

57. Simon of the stage : NEIL
Neil Simon is one of my favorite playwrights. Simon has written over thirty plays and about thirty screenplays. He has received more nominations for Oscars and Tony Awards than any other writer. My favorite play penned by Simon has to be “Brighton Beach Memoirs”, but the list of his great stage works seems endless and includes “Barefoot in the Park”, “The Odd Couple”, “Sweet Charity”, “Plaza Suite”, “California Suite”, “Biloxi Blues” and “The Goodbye Girl”.

60. Eponyms of the week? : GODS
The days of the week are named for celestial bodies and gods:

5. Figure in a dark suit : SPADE
I think the reference is to a deck of cards.

7. Sister co. of Verizon Wireless : AOL
AOL was a leading Internet Service Provider (ISP) in the 1980s and 1990s. The company does still provide dial-up access to the Internet for some subscribers, but most users now access AOL using faster, non-AOL ISPs.

8. “How Deep Is Your Love” Grammy winners : THE BEE GEES
The Brothers Gibb (hence, the name “The Bee Gees”) were born in England but grew up and started their musical careers in Australia. They moved back to Manchester in the north of England as youths, and there hit the big time.

11. Turn and a half on the ice : AXEL
An Axel is a forward take-off jump in figure skating. It was first performed by Norwegian Axel Paulsen at the 1882 World Figure Skating championships.

19. Rail hubs? : MARSHES
Rails are birds of the family Rallidae (hence their name). Outside of America, the name “rail” tends to be reserved for long-billed specie and the the term “crake” is used for short-billed species.

27. Like the Bahamas, Barbados and Belize : ANGLOPHONE
An anglophone is a speaker of English.

32. Like losers’ looks : HANGDOG
“Hangdog” is an adjective that can mean shamefaced and guilty, or downcast and intimidated. The word derives from the concept of a lowlife (a “dog”) that is only fit for “hanging”.

48. Relative of a spoonbill : IBIS
The ibis is a wading bird that was revered in ancient Egypt. “Ibis” is an interesting word grammatically speaking. You can have one “ibis” or two “ibises”, and then again one has a flock of “ibis”. And if you want to go with the classical plural, instead of two “ibises” you would have two “ibides”!

50. African tree cultivated for its nuts : KOLA
The nut of the kola tree has a bitter taste, and is loaded with caffeine. Despite the taste, the nut is habitually chewed in some cultures, especially in West Africa where the tree is commonly found in the rainforest. Here in the US we best know the kola nut as a flavoring used in cola drinks.