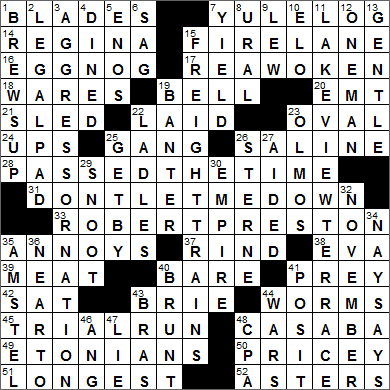 Today’s Wiki-est, Amazonian Googlies
Across
7. Centerpiece of a holiday gathering : YULE LOG
A Yule log is a large log made from a very hard wood that is burned as part of the Christmas celebration. There is also a cake called a Yule log that is served at Christmas, especially in French-speaking parts of the world. The cake is made from sponge that is rolled up to resemble a wooden Yule log.

14. The “R” of E.R. : REGINA
“ER” is a royal cypher, a monogram-like device used by the current queen of the UK. The initialism ER stands for Elizabeth Regina, literally translating as “Elizabeth, queen”. A more useful translation might me “Elizabeth, reigning”, meaning that Elizabeth is the reigning monarch, as opposed to being a Queen Consort, the wife of a reigning king. Elizabeth’s father used the royal cypher “GR”, meaning George Rex, or “George, king”. One of the most common places to see the royal cypher is embossed on a post box in the UK. I’ve also seem some old “GR” post boxes, and even one emblazoned with “VR” (Victoria Regina).

16. Holiday cupful : EGGNOG
It’s not really clear where the term “nog” (as in “eggnog”) comes from although it might derive from the word “noggin”, which was originally a small wooden cup that was long associated with alcoholic drinks.

25. Racketeering outfit : GANG
A “racket” is a fraudulent service, often one offered to solve a problem that does not exist, just to make money. A classic example is a “protection racket”, in which local businesses are offered protection from dangerous elements in a neighborhood. The use of the term “racket” to describe such activities was coined by the Employers’ Association of Chicago in 1927.

33. Harold Hill’s portrayer in the original cast of “The Music Man” : ROBERT PRESTON
The actor Robert Preston is best known for playing Professor Harold Hill in “The Music Man”, both in the 1957 stage musical and in the 1962 film adaptation.

38. Green on a screen : EVA
Despite the English-sounding name, Eva Green is a French actress. Green played Bond girl Vesper Lynd in the 2006 movie “Casino Royale”, opposite Daniel Craig.

43. Party spread : BRIE
Brie is a soft cheese, named after the French region from which it originated. Brie is similar to the equally famous (and delicious) Camembert.

48. Bright yellow fruit : CASABA
A casaba is type of honeydew melon. The casaba takes its name from the Turkish city of Kasaba, from where the fruit was imported into America in the late 1800s.

49. Some Kings’ Scholars : ETONIANS
King’s College is one of the constituent colleges of Cambridge University in England. King’s was founded by Henry VI back in 1441, just after he founded the sister college in Eton. Today, Eton is a boys’ boarding school educating pupils from 13 to 18 years of age, whereas King’s is a university.

51. Like the papacy of Pius IX, after St. Peter : LONGEST
Pope Pius IX was longest-reigning elected pope in the history of the Roman Catholic Church, holding office for over 31 years from 1846 to 1878. The Catholic Church regards Saint Peter as the first to hold the papal office, as he was the first bishop of Rome. Peter took office in 30 CE, and probably died in 64 CE, making him the longest-reigning pope.

52. Another name for Michaelmas daisies : ASTERS
“Michaelmas” is the feast of Saint Michael the Archangel, a day in the Western Christian calendar. Michaelmas is September 29th every year, and is associated with the beginning of fall.

Down
5. Genesis grandson : ENOS
Enos was the son of Seth, and therefore the grandson of Adam and Eve. According to the Book of Jubilees, Enos married his sister Noam.

8. Eurasian boundary : URAL
The eastern side of the Ural Mountains in Russia is generally regarded as the natural divide between the continents of Europe and Asia.

9. Dr. Kildare portrayer Ayres : LEW
The Hollywood actor Lew Ayres got his big break in “All Quiet On the Western Front”. Famously, he also played Dr. Kildare in several movies. Ayres’ private life wasn’t too dull. He was married three times, Lola Lane and Ginger Rogers being wives one and two. Ayres was also the man for whom actress Jane Wyman left her husband Ronald Reagan, although the Ayres-Wyman relationship didn’t last very long.

10. Longtime band with the 2015 album “Alone in the Universe” : ELO
The Electric Light Orchestra (ELO) is a symphonic rock group from the north of England.

11. Los Angeles suburb next to San Fernando : LAKE VIEW TERRACE
Lake View Terrace is suburb of Los Angeles that lies north of downtown, in the northeast section of the San Fernando Valley. The area garnered some unwelcome attention in 1991 as it was the site of the beating of Rodney King by LA police officers that was captured on videotape.

23. “American Me” star, 1992 : OLMOS
Edward James Olmos is a Mexican American actor. I mostly remember Olmos as the Lieutenant who was the boss of Crockett and Tubbs on television’s “Miami Vice”.

“American Me” is a 1992 biographical film about the rise to power of Mexican Mafia leader Montoya Santana. Santana is played by actor Edward James Olmos, who also produced and directed the film.

26. Tristram Shandy’s creator : STERNE
Laurence Sterne is best known for his novel, “The Life and Opinions of Tristram Shandy, Gentleman”. It is an epic work, published in nine volumes over ten years.

29. High-hat : SNOOT
“Snoot” is a variant of “snout” and is a word that originated in Scotland. The idea is that someone who is “snooty”, or snouty, tends to look down his or her nose at the rest of the world.

35. Brewery named for a Dutch river : AMSTEL
Amstel is a Dutch beer and brewery, founded in 1870 in Amsterdam. The brewery takes its name from the Amstel river which runs through the city.

44. Private engagements? : WARS
Those would be soldiers of the rank “private”.

46. First name of 2012’s Best Director : ANG
Taiwanese director Ang Lee sure has directed a mixed bag of films, mixed in terms of genre but not in terms of quality. He was at the helm for such classics as “Sense & Sensibility” (my personal favorite), “Crouching Tiger, Hidden Dragon”, “Hulk”, “Brokeback Mountain” and “Life of Pi”.